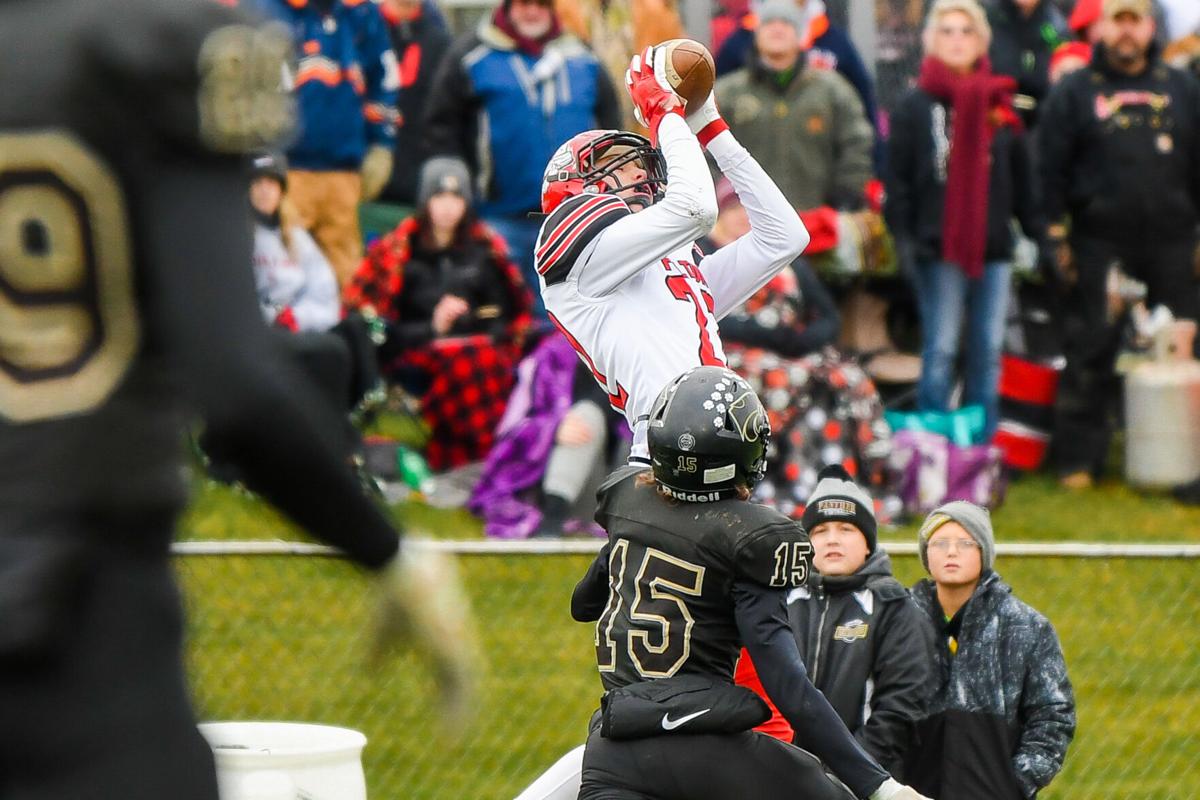 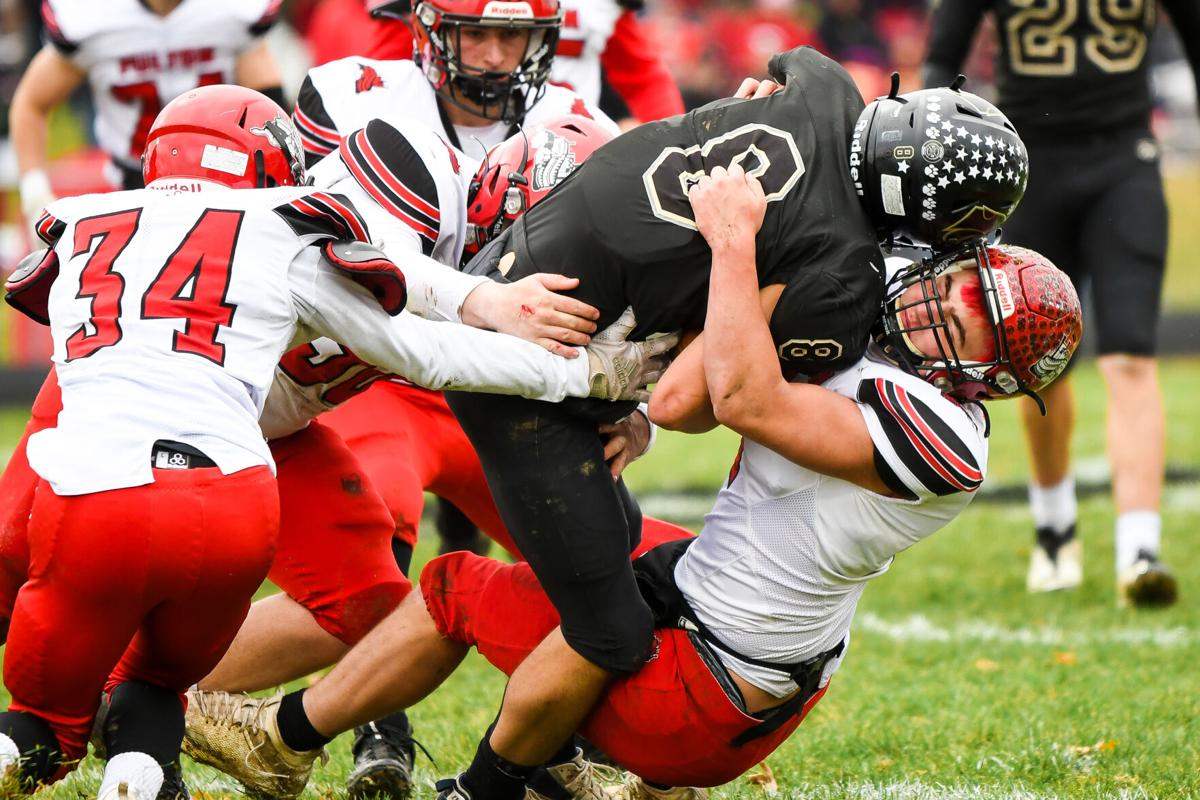 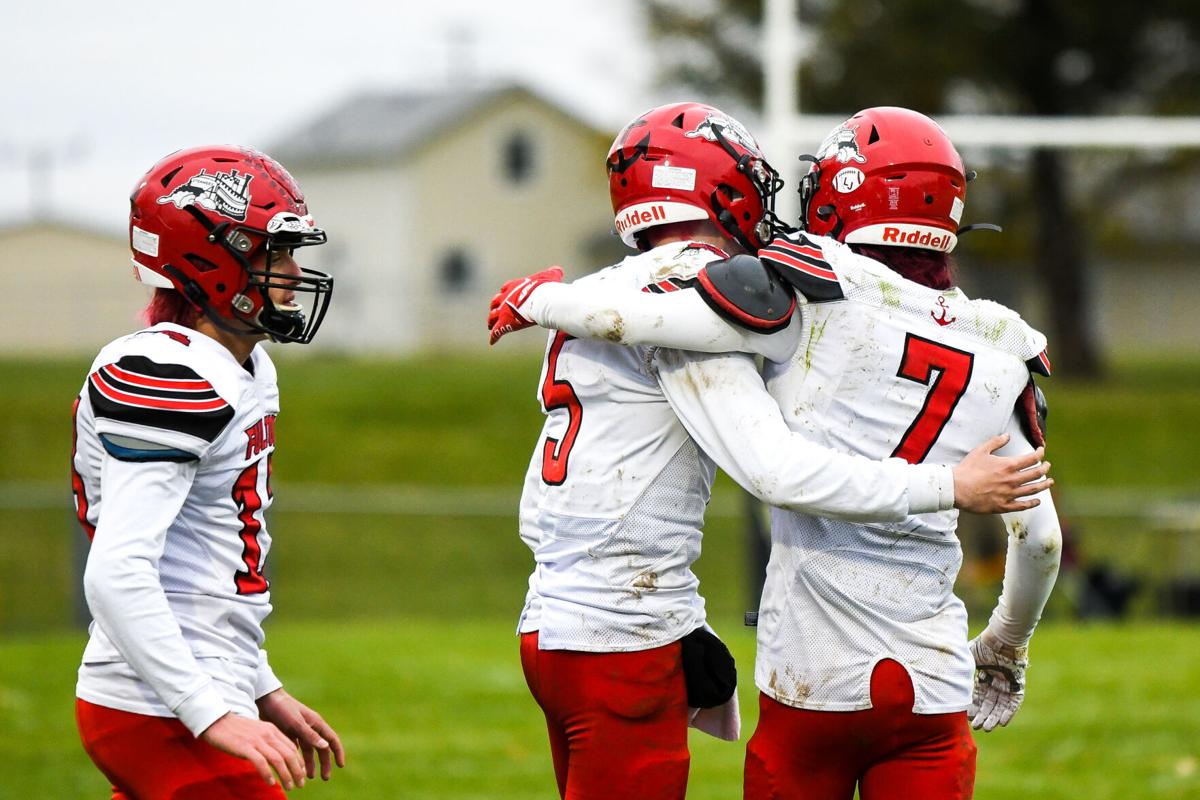 Fulton seniors Patrick Lower and Jacob Jones put their arms around each other after the end of the quarterfinal loss on Saturday afternoon in Lena, Ill. 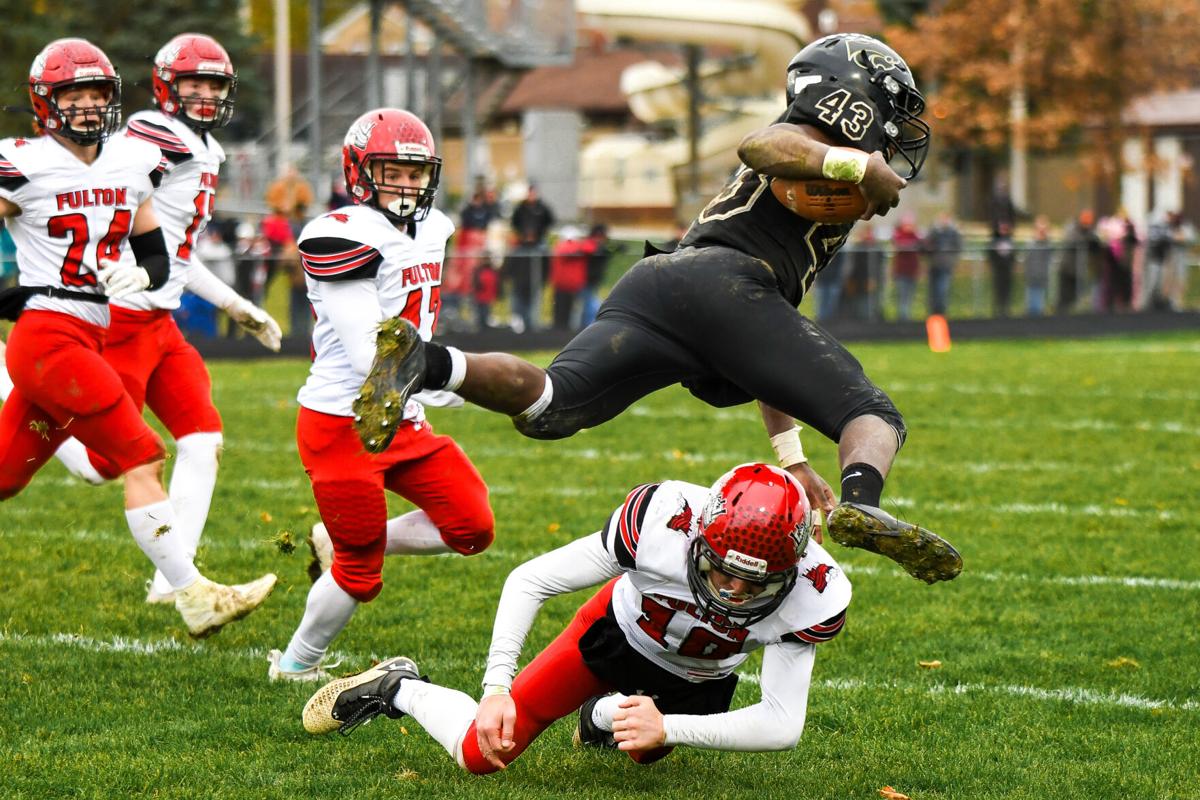 Fulton’s Conner Sheridan dives at a Lena-Winslow runner during the Steamers’ quarterfinal loss to the Panthers on Saturday. 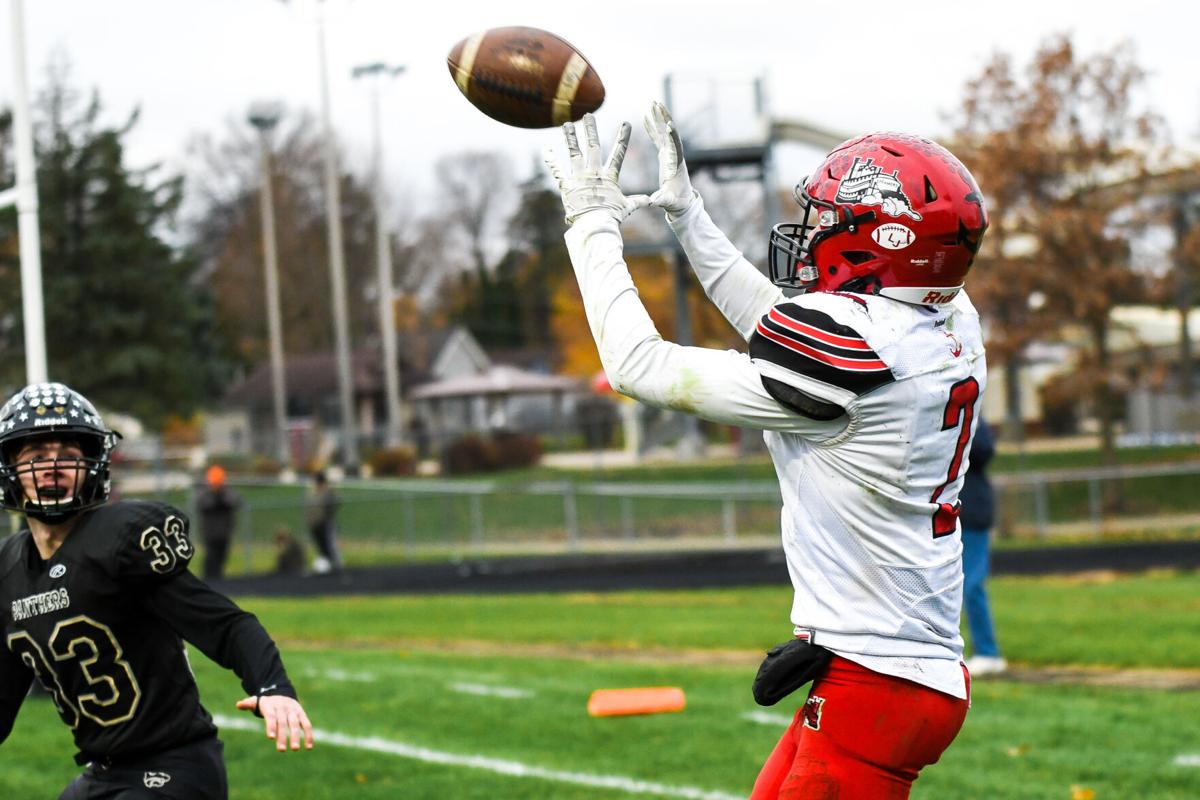 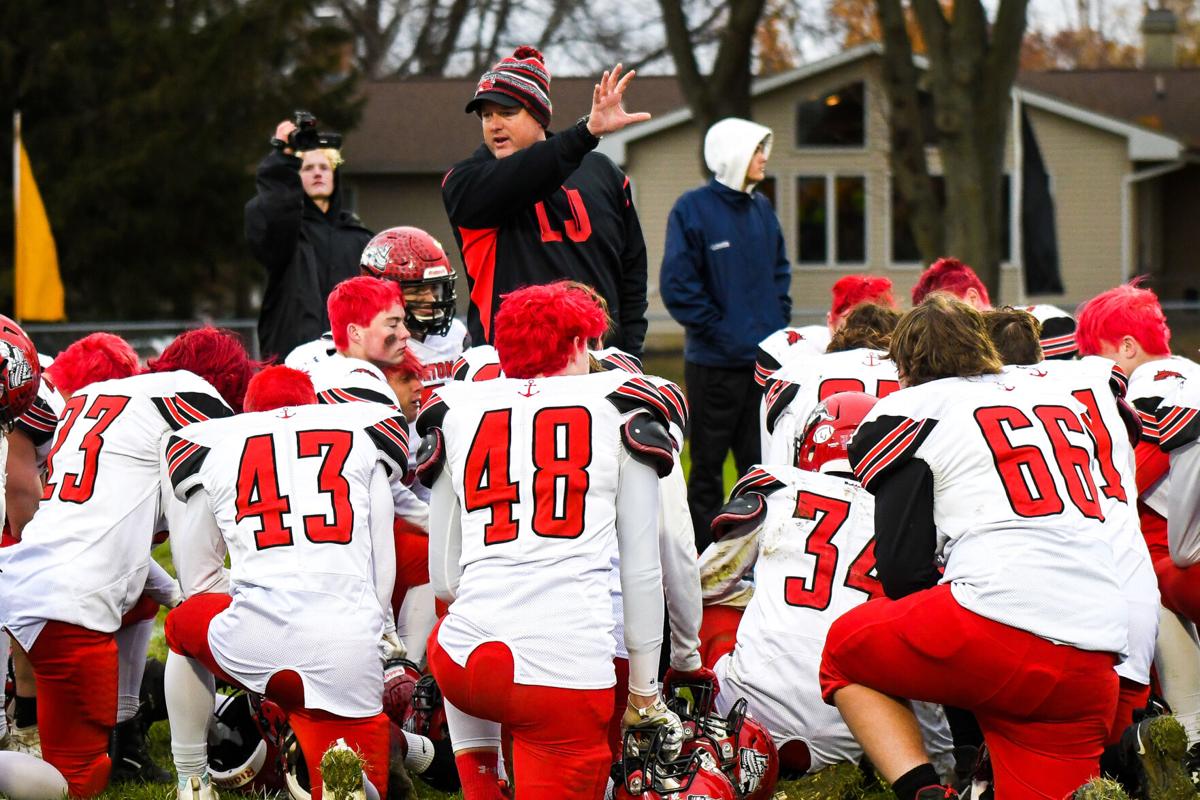 Fulton seniors Patrick Lower and Jacob Jones put their arms around each other after the end of the quarterfinal loss on Saturday afternoon in Lena, Ill.

Fulton’s Conner Sheridan dives at a Lena-Winslow runner during the Steamers’ quarterfinal loss to the Panthers on Saturday.

LENA, Ill. – The Fulton Steamers ended their impressive 2021 campaign in the Class 1A state quarterfinals on Saturday afternoon, falling to Lena-Winslow 54-28.

The Steamers were coming in after losing a plethora of athletes – including two all-state players. Their schedule also switched up after moving to the Northwest Upstate Illini Conference for the first year. From the get-go, they felt like they had something to prove.

“I don’t think anybody thought we were going to do what we did this year,” senior Brock Mason said. “I couldn’t be more proud of my teammates, my coaches, the fans everything about this football team. We proved everybody wrong this year.”

They dominated the first two rounds of the playoffs with huge margins of victory. They ended in the top eight teams in the state.

“Our kids, with being a part of a very good team last spring it kind of springboard us to this fall season,” head coach Patrick Lower said. “I thought our kids played really well and our seniors led throughout. I was really proud of them. What we’ve been through the last few weeks, no one wants to go through that, and our kids did it with character, integrity and I’m really proud to be their head coach.”

That was through adversity as well. Just three days before they played the second round, senior running back Jacob Jones lost his father. Larry Jones was also a coach throughout the Fulton school system and known by all of the athletes on the team.

The Steamers rallied that weekend for an emotional 55-7 win over Ottawa Marquette.

“The way we faced adversity from Week 1 to Week 12,” senior quarterback Patrick Lower said. “Coming out this year and having people doubt us because of the seniors we lost last year, coming out and having people not knowing what we’re going to do in a new conference, even last week losing Larry like we did. We came to each other and came together as a team. We fought through adversity and left everything out there, that’s all you can do.”

Saturday, the Steamers put up a fight. As the final buzzer rang out in Lena, head coach Patrick Lower was yelling “Keep your heads high” to his athletes heading toward the handshake line.

Lena-Winslow scored three consecutive touchdowns to start the game, two coming off of 40-plus yard runs from Panther running back Marey Roby. Fulton managed to stop the conversions all three times but still trailed 18-0. Roby finished with 265 yards for the Panthers.

“The stats don’t lie,” Mason said. “Marey Roby is one of the best, if not the best running back I’ve ever played against. Everybody on their team is solid and they don’t have a weak link.”

Two minutes into the second quarter, the Panthers had the ball on the 14-yard line once more and looked to strike again. On a second down, the ball got loose and it was the red and white jerseys that landed on top of it.

Two big pass plays moved the Steamers down the field. First, a sweep out to Keegan VanKampen advanced them to the 27-yard line. Then, on a fourth down, quarterback Patrick Lower threw under pressure to Brock Mason to move them to the five.

Lower ended the drive on a quarterback keep to punch in their first points of the game.

The Panthers scored again, but on the kick off Brock Mason found a hole, Mason took an open field 78 yards for another TD.

“It felt like every other game,” Mason said. “The scoreboard showed we were down big, but we didn’t feel like we were losing the game until the buzzer sounded. We were all fighting. Coach was preaching in the halftime locker room to fight like there is no tomorrow. For us seniors, there is no tomorrow. I’m proud of my teammates, it just didn’t turn out in our favor. They’re a heck of a football team and they outplayed us.”

Endi Quinaj capped it off and the Steamers trailed by just ten points, 24-14.

That was a close at Fulton would get to Le-Win.

The Panthers scored one more time in the first half with just under two minutes to play, completing the two point conversion and taking a 32-14 lead. Fulton moved quickly down the field to try to cut the margin once more before breaking for the lock rooms.

Jacob Jones powered his way into the end zone from three yards out, but a penalty brought it back to third down. On a pass attempt, Le-Win picked off Lower and Fulton wasn’t able to score again before halftime.

“It was hard to move them, it was hard to establish a run game,” quarterback Patrick Lower said. “The penalties didn’t help. It’s tough to play from behind.”

There were other moments where the Steamers picked up momentum. With two minutes left in third, Fulton attempted an onside kick and recovered it but they weren’t able to convert it into points.

Baylen Damhoff caught a TD pass in the far corner, and Brock Mason did the same late in the game.

“We knew they were big and good up front,” quarterback Patrick Lower said. “Unfortunately, we struggled to run the ball but we have faith in our passing game. We have a lot of different dudes that we can use on offense to come at them.”

“We found some things and we thought we could do some things offensively and we were able to do that,” Coach Lower said. “They’re just so good you can’t have negative plays. When you hve a negative play it’s tough to overcome that. Our kids never stopped fighting.”

Fulton ends their season 9-3, two of those losses coming at the hands of the Panthers. Lena-Winslow had previously had the top spot in the Class 1A rankings and is the returning state champions from the 2019 season.

“[I’ll remember] the family bond that we all had,” Mason said. “Everything we do, we do as a family. They’re my brothers and they always will be.”