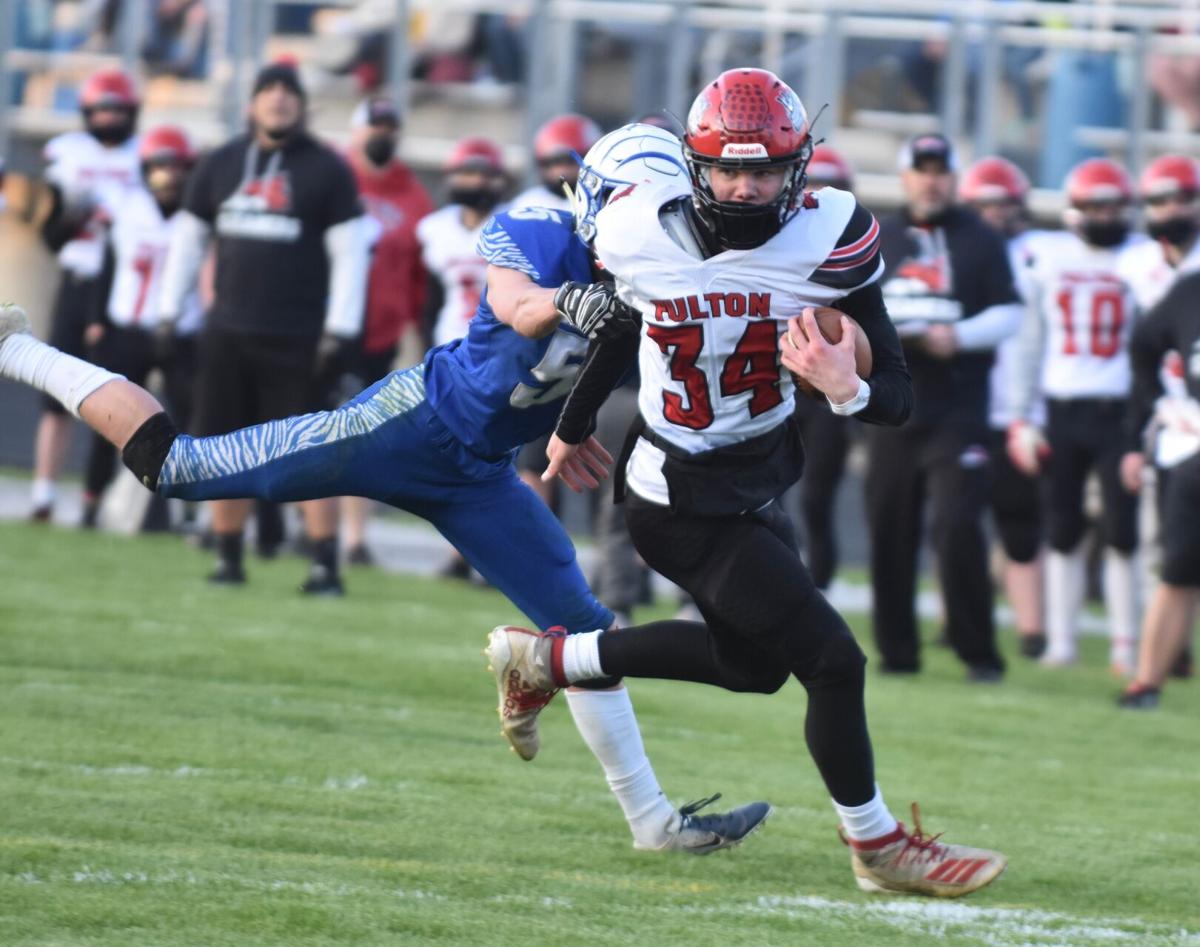 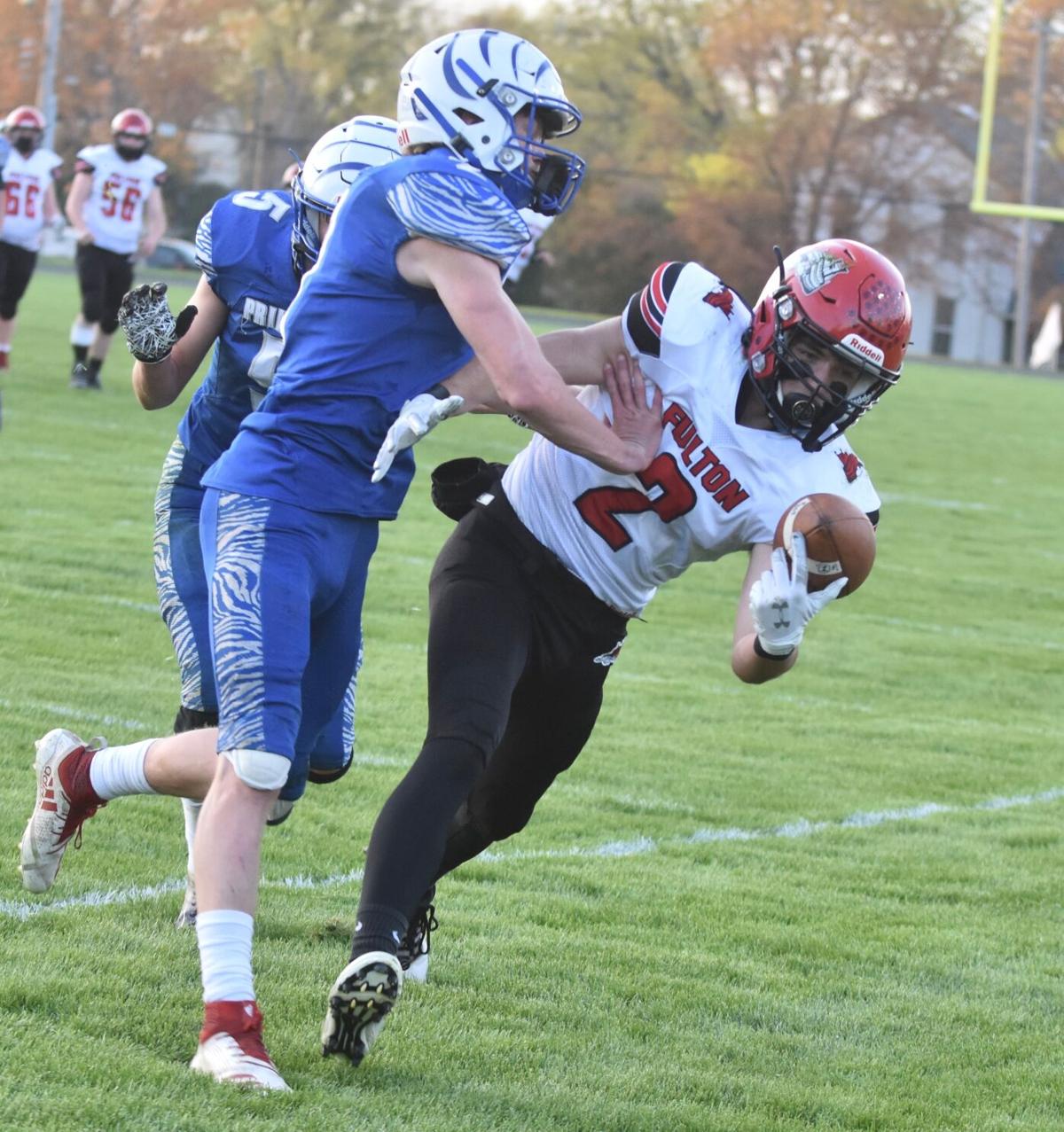 Futon’s Brock Mason (right) attempts to make a catch on the sideline April 23 at Princeton. 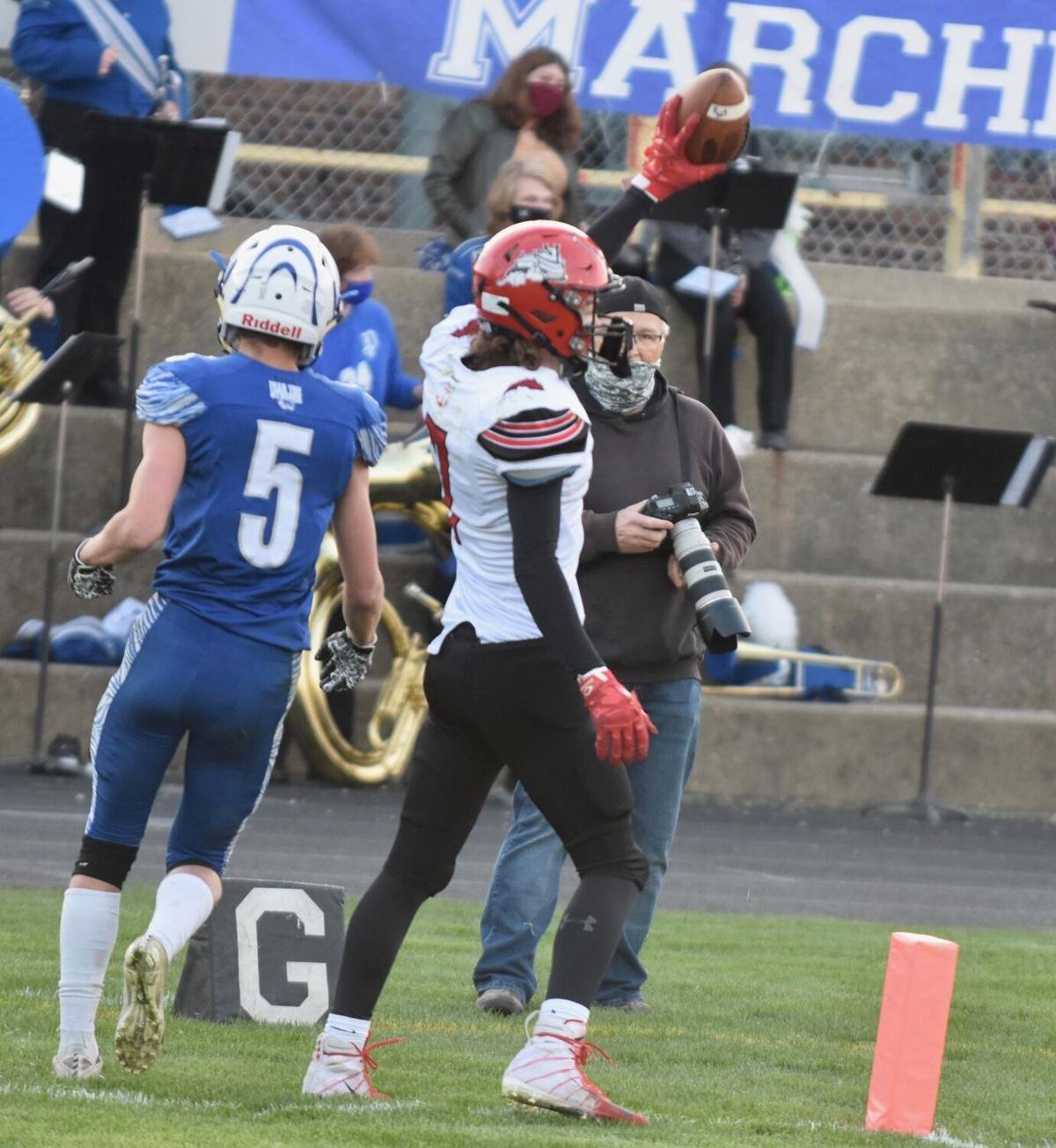 Fulton’s Jacob Jones (center) holds up a ball after making a TD catch April 23 at Princeton.

Futon’s Brock Mason (right) attempts to make a catch on the sideline April 23 at Princeton.

Fulton’s Jacob Jones (center) holds up a ball after making a TD catch April 23 at Princeton.

PRINCETON — With tears in their eyes, the Fulton football team embraced one another following the Steamers’ final game of the season.

“We can’t do any of this if these guys don’t show up, if these guys don’t work out in the weight room, if they don’t love each other and work hard, then we can’t coach these guys the way we do,” Fulton coach Patrick Lower said. “They deserve all the credit in the world for waiting seven, eight months to play, practicing in three inches of snow and mud, and they stuck with it. They did everything they could.

“I’m just so glad that I’m their head coach because I love every one of these guys.”

Fulton finished the year 4-1 after a 49-38 loss to Princeton Friday night.

The Steamers jumped out to a 14-0 lead and even led 24-14 at halftime, but Princeton outscored Fulton 35-14 in the second half to take the win.

Despite the loss, Steamers’ senior running back Ethan Rash has no regrets about how 2021 ended.

“I’m more sad about this being our last game,” Rash said. “The scoreboard —no one knew that was going to happen. No one knew we could even stay with them. Everyone thought, ‘Well, they’re 1A, Fulton, they’re 3A ranked No. 2 in the state and they’re not going to hang with them.’

“We lost 45-7 last year. We could have won. We had a lot of opportunities to pull it out, but we didn’t. Every singe one of these guys gave it their heart, gave it every ounce of their body to do it and I’m very proud of the way everybody played. That score makes me proud.”

Fulton started the game with back-to-back touchdowns in the first quarter.

Steamers’ quarterback Connor Barnett hit Jacob Jones on an eight-yard touchdown pass on the first drive of the game. After the Fulton defense forced Princeton to punt, Barnett kept the next drive alive with a clutch pass to Kyler Pessman on a fourth down, which set up an 11-yard touchdown run from Pessman.

However, Princeton answered with two touchdowns of its own to knot it up 14-14 by the end of the quarter.

The Steamers wasted no time in the second quarter, though, as Barnett hit Pessman for a 35-yard touchdown pass after a Fulton TD had been called back due to a penalty a few plays earlier.

Despite several turnovers between the two teams in the quarter, the next score didn’t come until four seconds before halftime, as Fulton’s Endi Qunaj hit a 30-yard field goal after a deep pass to Jones got the team in field goal range. That made it 24-14 Steamers.

Rash opened the second half up with a 33-yard TD run, but it was all Tigers after that — Princeton’s Teegan Davis scored on a 60-yard pass from quarterback Michael Gibson, and Cael Davis caught a 33-yard TD pass to cut Fulton’s lead to 31-28.

Rash scored again at the start of the fourth quarter to make it 38-28, but Princeton responded with an Augie Christiansen TD —38-35.

On the ensuing kickoff, the Tigers recovered an onside kick and a few plays later, Gibson scored on a QB sneak on fourth-and-one as Princeton gained its first lead of the game, 42-38 with 8:48 remaining.

“I couldn’t be more proud of these kids. They worked their tails off. I liked our game plan. We stuck to it and we did some really good things out there, we just couldn’t hold them down for four quarters.”

Rash said though this season is over, Steamer fans have plenty to look forward to next fall.

“It’s been the time of my life,” Rash said. “Our juniors this year stepped it up so much from last year. They are great players. No. 2 Brock Mason, great player — he’s going to be so good next year. No. 7 Jacob Jones, No. 42 Keegan VanKampen, Kole Schipper, Joey Huizenga — all of them. They’ve stepped it up big time.

“It’s been really fun watching them grow and teaching them.”