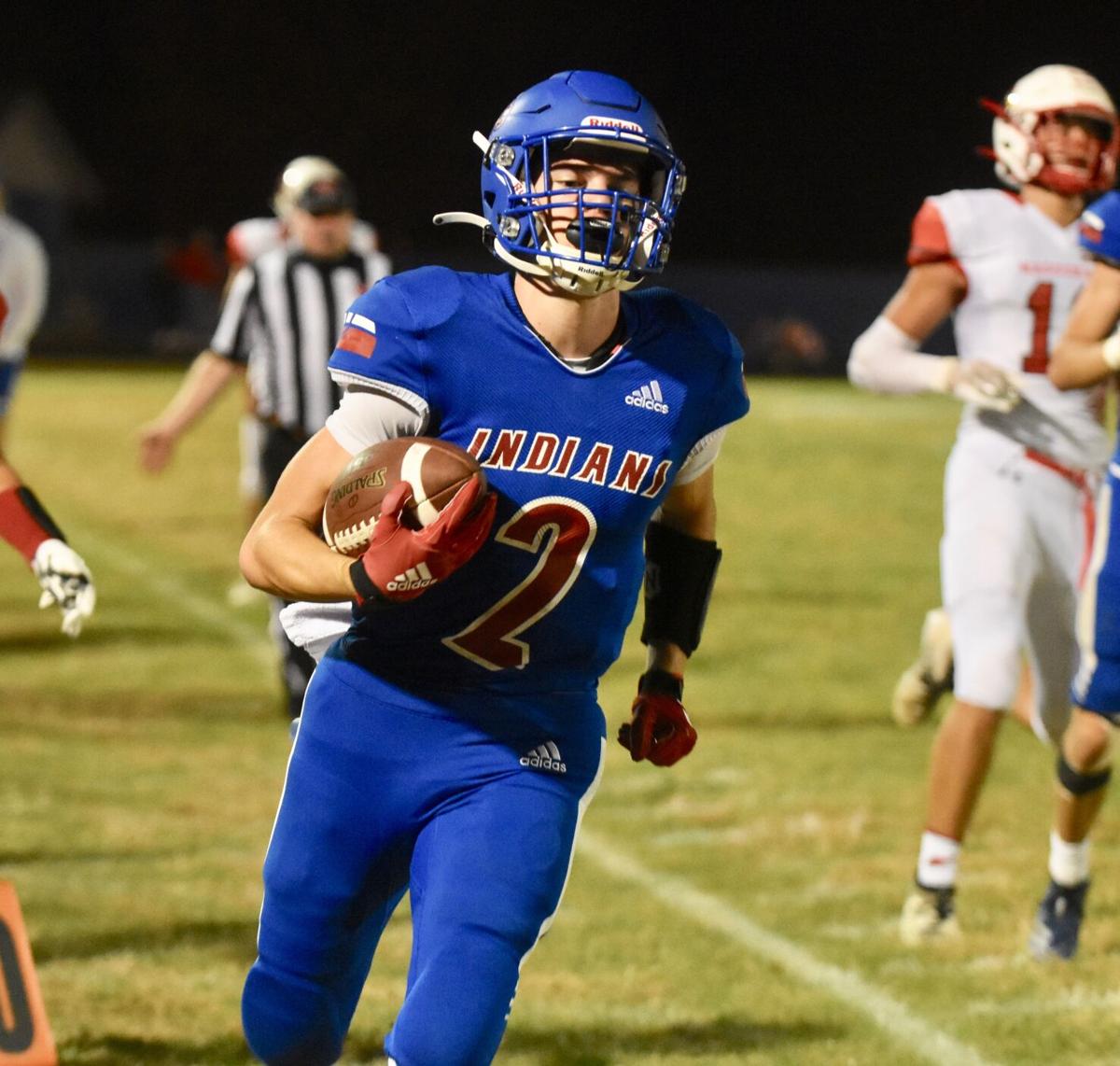 Camanche’s Jordan Lawrence (center) runs out of bounds during the Indians’ game against Maquoketa on Oct. 9 in Camanche. 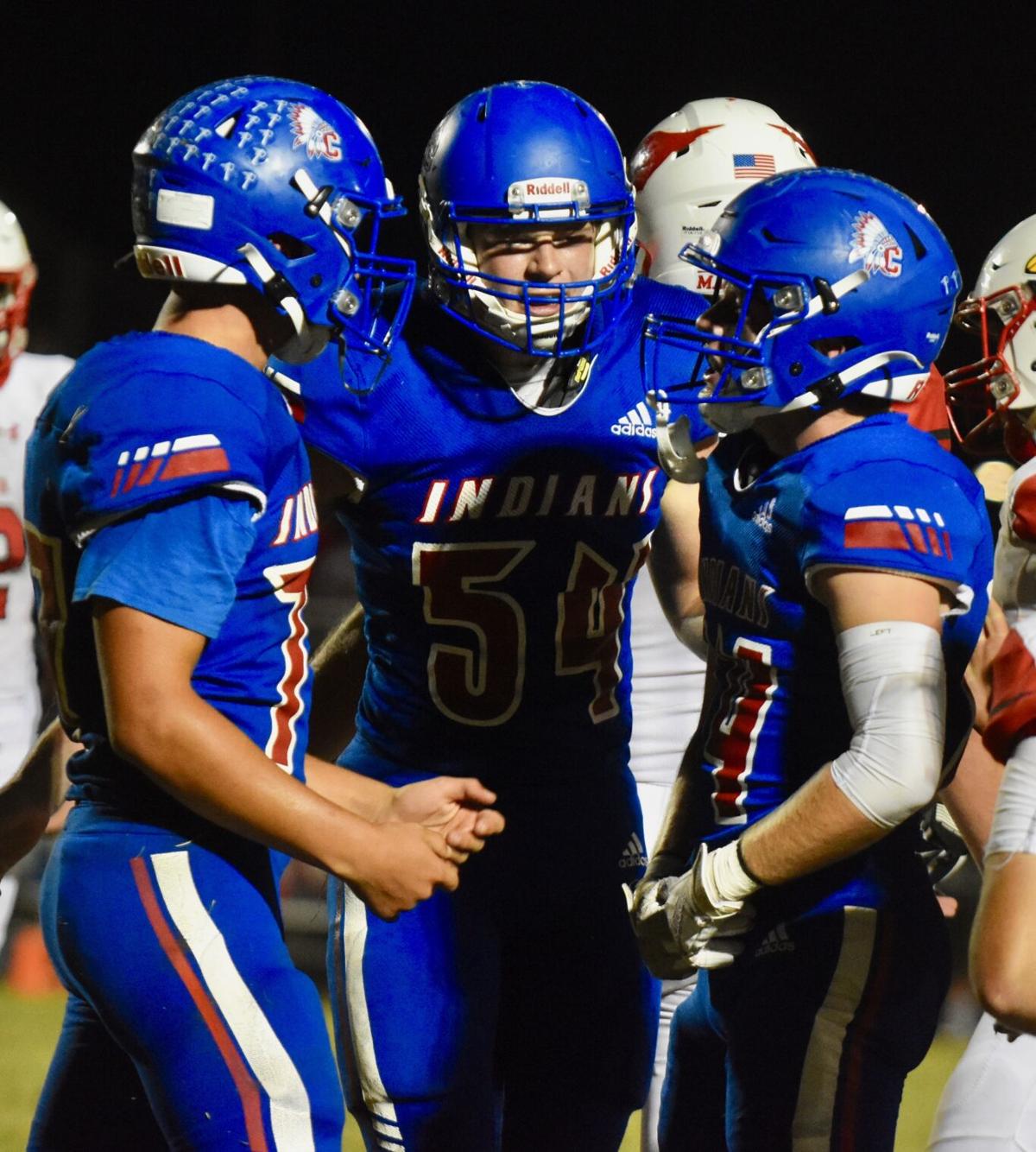 Camanche’s Zayne Feller (middle) celebrates with teammates after a tackle during Camanche’s game against Maquoketa on Oct. 9 in Camanche. 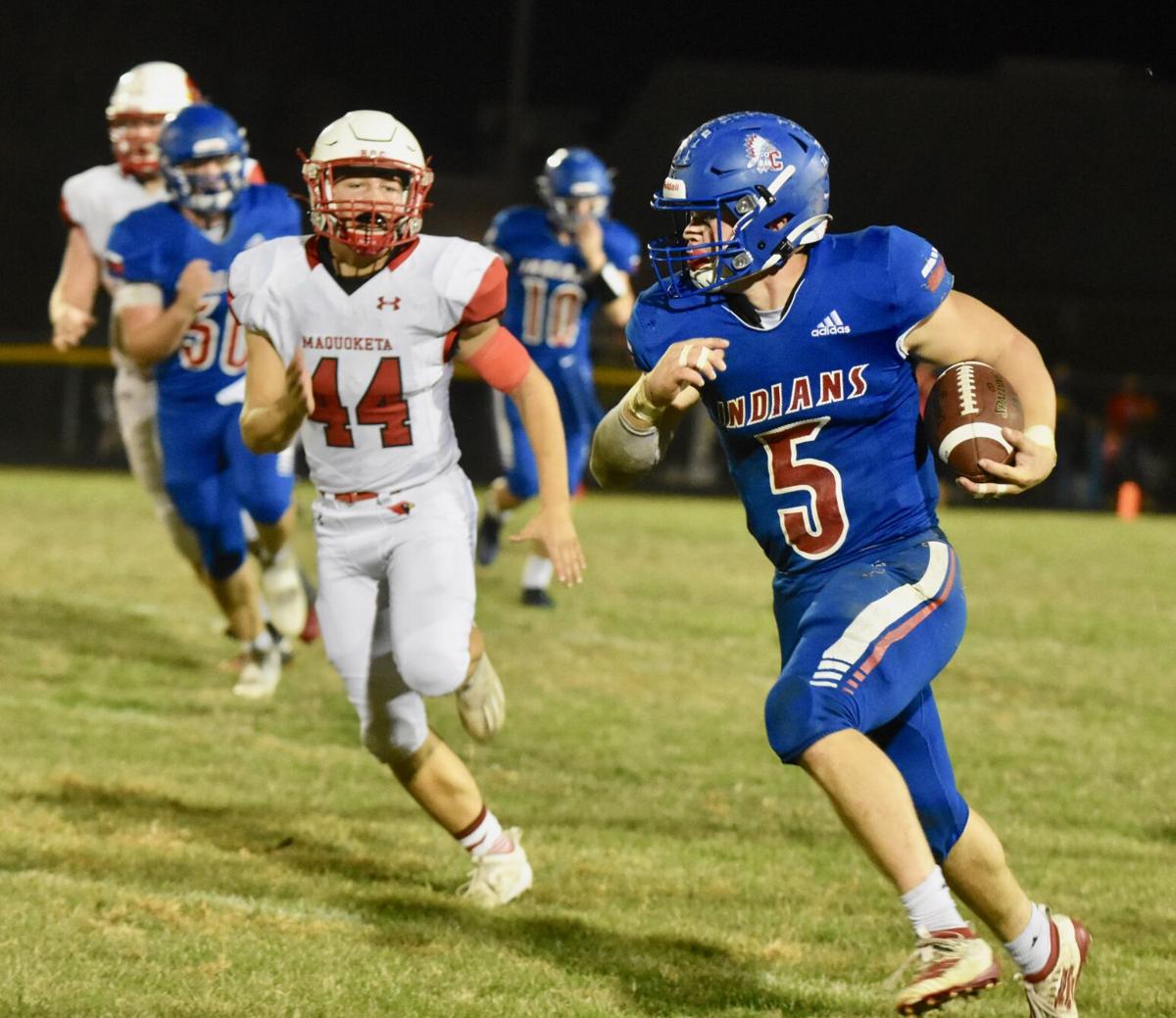 Camanche’s Cade Everson (right) runs past a Maquoketa defender during the Indians’ game against the Cardinals on Oct. 9 in Camanche.

Camanche’s Jordan Lawrence (center) runs out of bounds during the Indians’ game against Maquoketa on Oct. 9 in Camanche.

Camanche’s Zayne Feller (middle) celebrates with teammates after a tackle during Camanche’s game against Maquoketa on Oct. 9 in Camanche.

Camanche’s Cade Everson (right) runs past a Maquoketa defender during the Indians’ game against the Cardinals on Oct. 9 in Camanche.

CAMANCHE — After clinching a district championship last week and riding a five-game win streak, Camanche coach Dustin Coit was a little worried heading into the final game of the regular season.

Turns out, he didn’t need to be.

“I was a little worried about how we’d come in, but we had a pretty good week of practice, our guys were focused,” Camanche coach Dustin Coit said. “We came out and played really well again tonight.”

The Class 2A No. 6 Indians defeated Maquoketa 42-7 in a nonconference game to finish the season 6-1 and on a six-game win streak.

The Indians jumped out to a 21-0 lead in the first half and never lost momentum, as Camanche shut down Maquoketa (2-3) quarterback Kannon Coakley and came out with the win.

The Indians will find out for certain with a noon announcement from the IHSA on Saturday, but are likely to receive a first-round bye in the playoffs following an unprecedented season.

Sometimes it’s hard to believe it all began with a loss to Mount Vernon in Week 1.

“Week 1, we definitely didn’t show our best football,” Camanche quarterback Michael Delzell said. “We just didn’t come out with any spark or any energy. Our caches cleaned that up, we worked hard in practice and we just kept pushing and getting better each week.”

Following a scoreless first quarter, Delzell lofted a perfect, 30-yard touchdown pass to Jordan Lawrence in the back of the end zone.

“The line gives great opportunity for me,” Delzell said. “I don’t have to worry about pressure much and my guys just make plays. They make my job so easy and Coit is really creative in our playbook with ways to get our playmakers the ball, and they just do their thing.”

The Cardinals punted on the next drive and the Indians scored right away on a 43-yard touchdown run from Cade Everson to make it 14-0.

Following another Cardinals punt, Delzell picked apart the Cardinal defense and got the Indians down to the Maquoketa one-yard line thanks to a couple of passes to Tucker Dickherber.

Everson punched it in a few plays later, making it 21-0.

“They just really started to key on pass like they have been the past few weeks,” Everson said. “Because our pass is deadly too, once they start keying on one, the other one opens up so that’s how it works every week.”

After Maquoketa’s Coakley engineered a two-minute drill touchdown drive before halftime, the Indians scored just 18 seconds into the second half as Everson left everyone in the dust on a 73-yard TD run.

“They loaded the left side and it was a right-side run,” Everson said. “A hole opened up and I just took off.”

Though the Cardinal defense would pick Delzell off a couple of drives later, Dickherber got the ball right back with an interception, which set up another Everson TD run from nine yards out, making it 35-7.

Delzell found Lawrence again on a 39-yard strike with four minutes left in the third quarter to give the Indians their final score of the game and a running clock.

“They were kind of off me a little bit and I jabbed outside, ran a skinny post,” Lawrence said. “Mike through a perfect ball to the end zone. He just let me run under it.”

The TD was set up by a 30-yard reception from Dickherber a few plays earlier.

Lawrence said it feels great when their pass game is on.

“It makes me feel great because Mikey’s been throwing great balls, our line is holding up for him, giving him enough time to get back in the pocket and toss it out there,” Lawrence said. “Plus, they’re also keying on Cade, so it opens up stuff for me and vice versa when they’re keying on pass.”

Zach Erwin had an interception on Coakley in the fourth quarter.

The Indians defense shut down Coakley, who came into the game as the Cardinals’ most dangerous playmaker.

“They had a good first drive on us, they had the ball six or seven minutes in that first quarter and kind of pounded (Coakley) a little bit,” Coit said. “We were worried about him coming in. He had two really big games running, he’s had really big games passing, but I thought our defense buckled down and played assignment football.”

Delzell said the Indians are ready for the postseason.

“We didn’t take any steps back tonight,” he said. “We just want to keep getting better every week and see how far it can take us.”

The River Kings (0-6) fell to the Lancers (4-1) in a Mississippi Athletic Conference game Friday at Eldridge.

The River Hawks (6-1) shut out the Raiders (2-2) in a nonconference game Friday in Dunkerton.

EV quarterback Conor Gruver finished 12-of-19 for 251 yards and five TDs. Kolton Murphy had 14 carries for 203 yards and two TDs. Parker Olson led all receivers with three catches for 102 yards and three TDs. Hayden Felkey had 14.5 tackles, three sacks and an interception.

The Sabers (4-3) notched a late-comeback victory over the Indians (2-4) in a nonconference game Friday in DeWitt.

Sabers quarterback Henry Bloom scored on a quarterback sneak with just 36 seconds left to give Central DeWitt the late lead and win. The TD was set up by a 38-yard Bloom pass to John McConohy a few plays earlier.

Marion came back after being down 20-8 to start the fourth quarter.

The Rebels (1-4) fell to the Beavers (2-5) in a River Valley Conference game Friday in Goose Lake.