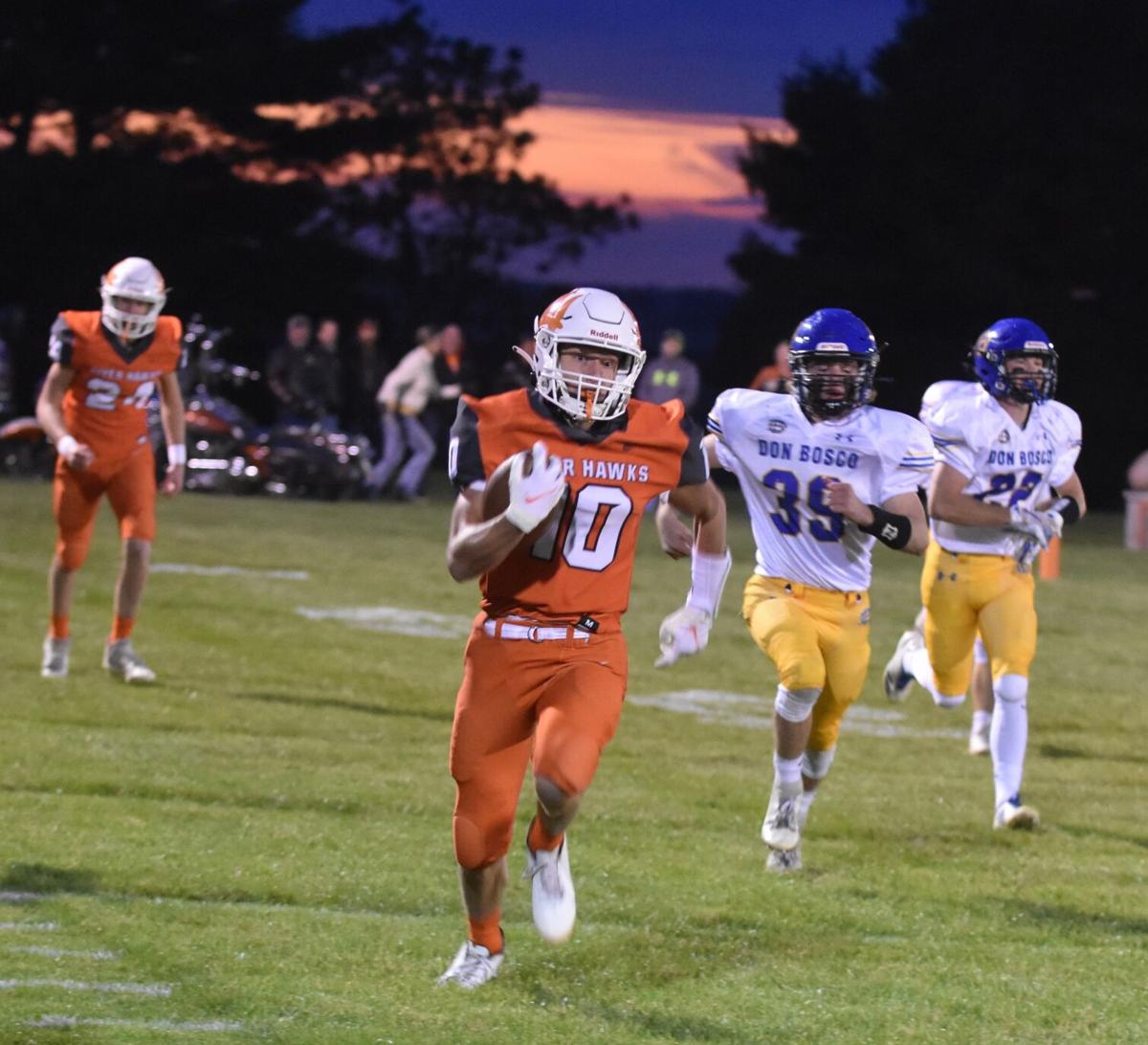 Easton Valley’s Carson Fuegen (ballcarrier) runs for a touchdown during the River Hawks’ loss to Don Bosco Oct. 2 in Preston. 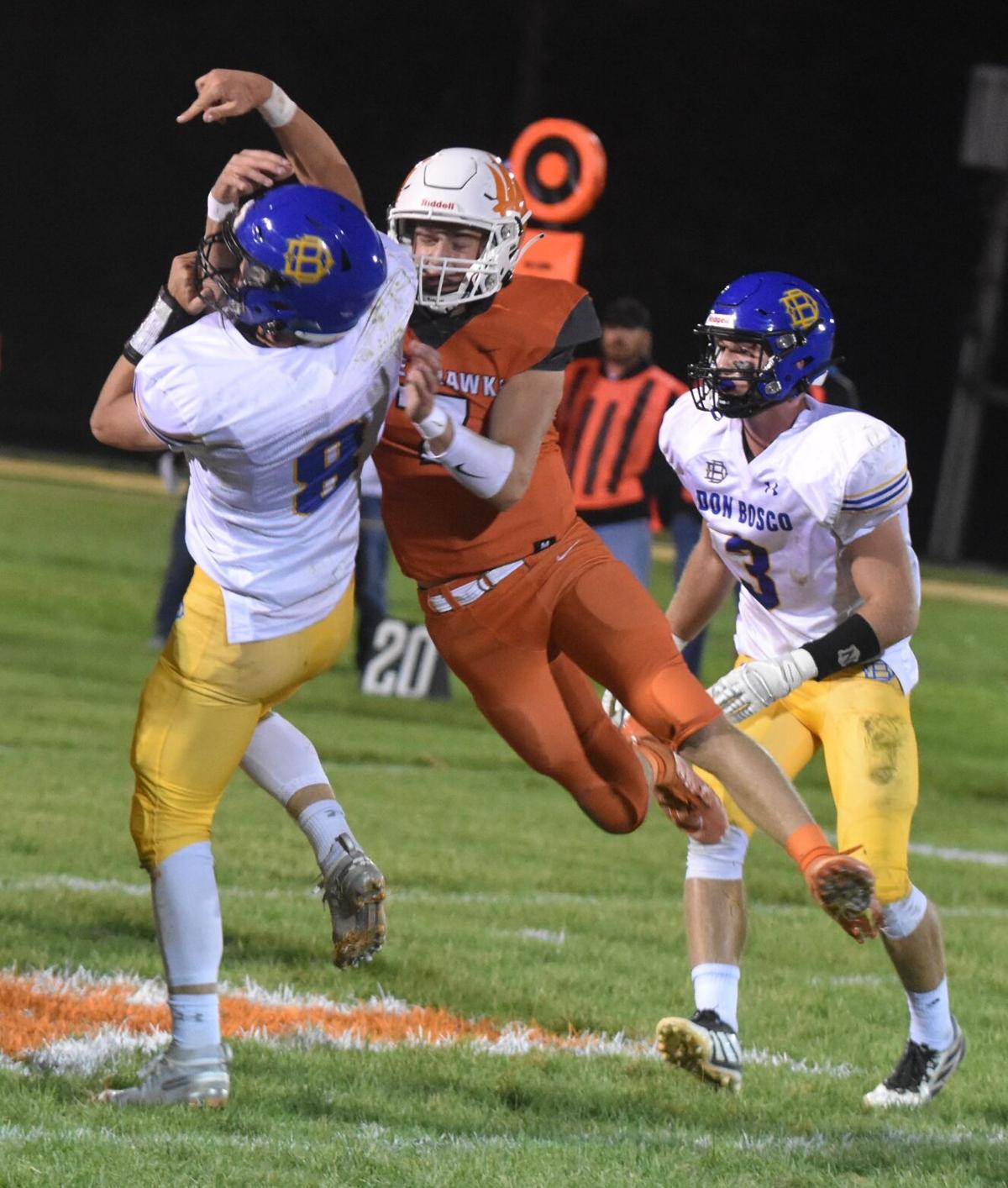 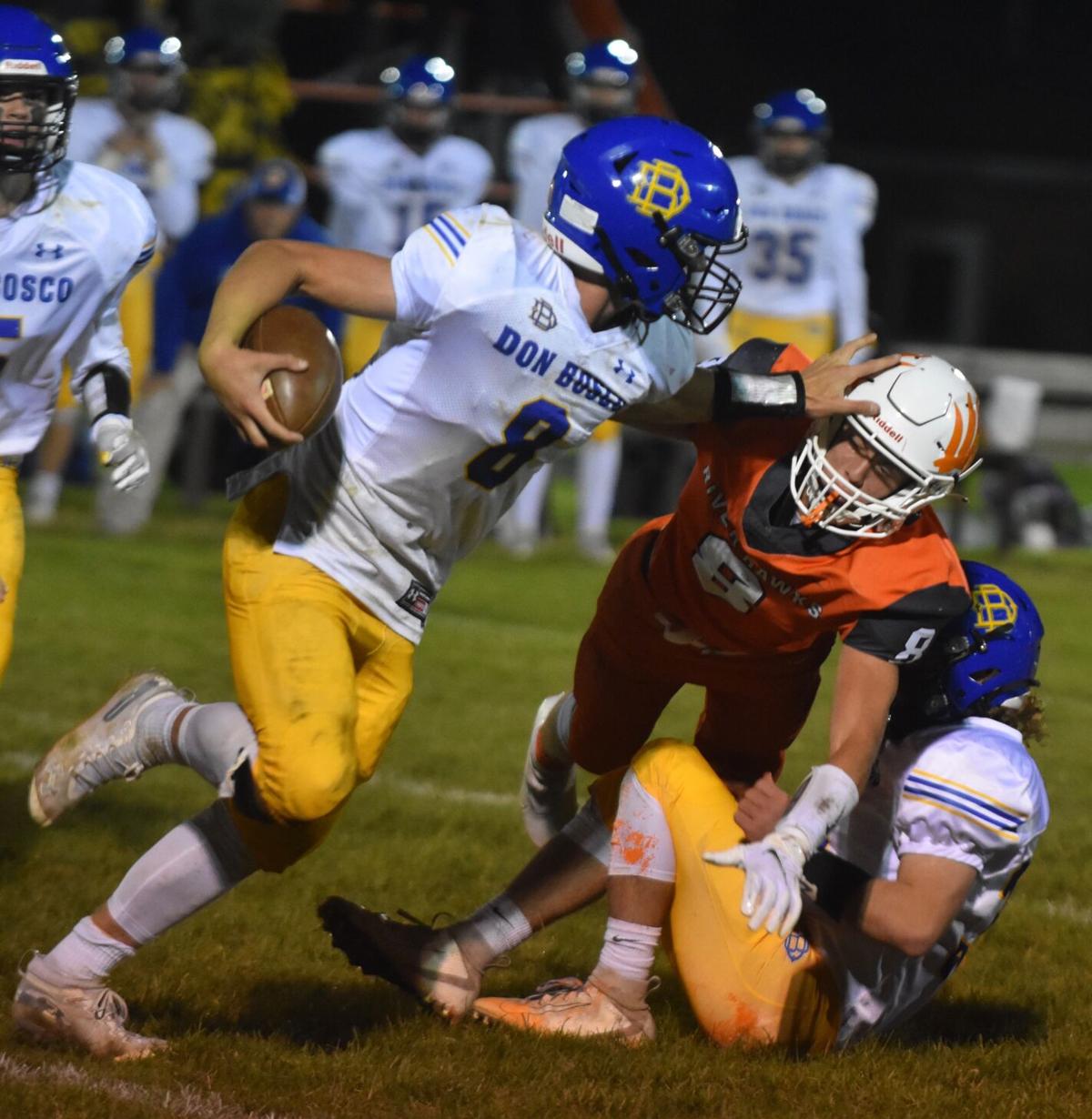 Easton Valley’s Carson Fuegen (ballcarrier) runs for a touchdown during the River Hawks’ loss to Don Bosco Oct. 2 in Preston.

PRESTON — For one half of football, Easton Valley went toe-to-toe with the No. 1 8-man football team in the state.

The River Hawks feel they can build on that.

“We had a good first half,” River Hawks sophomore Carson Fuegen said. “We can move past it and come back stronger. We know what we did wrong and should be able to come back a lot stronger next time, and I think we can beat them.”

The River Hawks led 21-20 by the end of the first quarter, but the Dons outscored them 34-13 the rest of the way to hand Easton Valley its first loss of the season.

“I thought our guys fought hard all night,” Easton Valley coach Tony Johnson said. “We wanted to be physical and match their physicality, and I thought we did that. Just really proud of the effort I got from the boys.

“We came up short tonight, but this is a game hopefully we can play in a month in the dome.”

The first quarter started off hot for both teams.

Don Bosco’s Carson Tenold started the scoring with a 61-yard touchdown run two minutes into the game, but the River Hawks responded in a big way, as Fuegen returned the ensuing kickoff 75 yards for a touchdown to make it 7-6.

“It was kicked to the right, I picked it up and I just saw that we had a bunch of blockers off to the right, and they were all coming left,” Fuegen said. “I saw a hole and just took it.”

Kolton Murphy scored on a three-yard touchdown run after the River Hawk defense forced a turnover on downs thanks to a Fuegen deflection on fourth down. Murphy’s TD was set up by an 18-yard catch from Parker Olson.

Don Bosco responded with a 28-yard touchdown pass from Cael Frost to Dillon Welter to tie it back up, 14-14.

The scoring didn’t stop there. Fuegen caught a 63-yard TD pass from quarterback Conor Gruver with 2:37 remaining in the quarter and Frost responded with a 61-yard TD run a minute later, as the River Hawks would cling to a 21-20 lead by the end of the quarter.

“It was good to get off on a good note and get the ball rolling,” Johnson said. “I felt our boys came in here focused and we were ready to go.”

Easton Valley began the second quarter with a 10-yard touchdown pass from Gruver to Olson, but Frost would run in touchdown runs of 48 and four yards in the quarter as the Dons took a 32-28 halftime lead.

Don Bosco ran away with it in the second half, getting touchdowns from: Tenold (six run), Welter (52 pass) and Frost (55 run).

Easton Valley didn’t score again until a seven-yard Gruver pass to Porter Fuegen at the 4:38 mark of the fourth quarter.