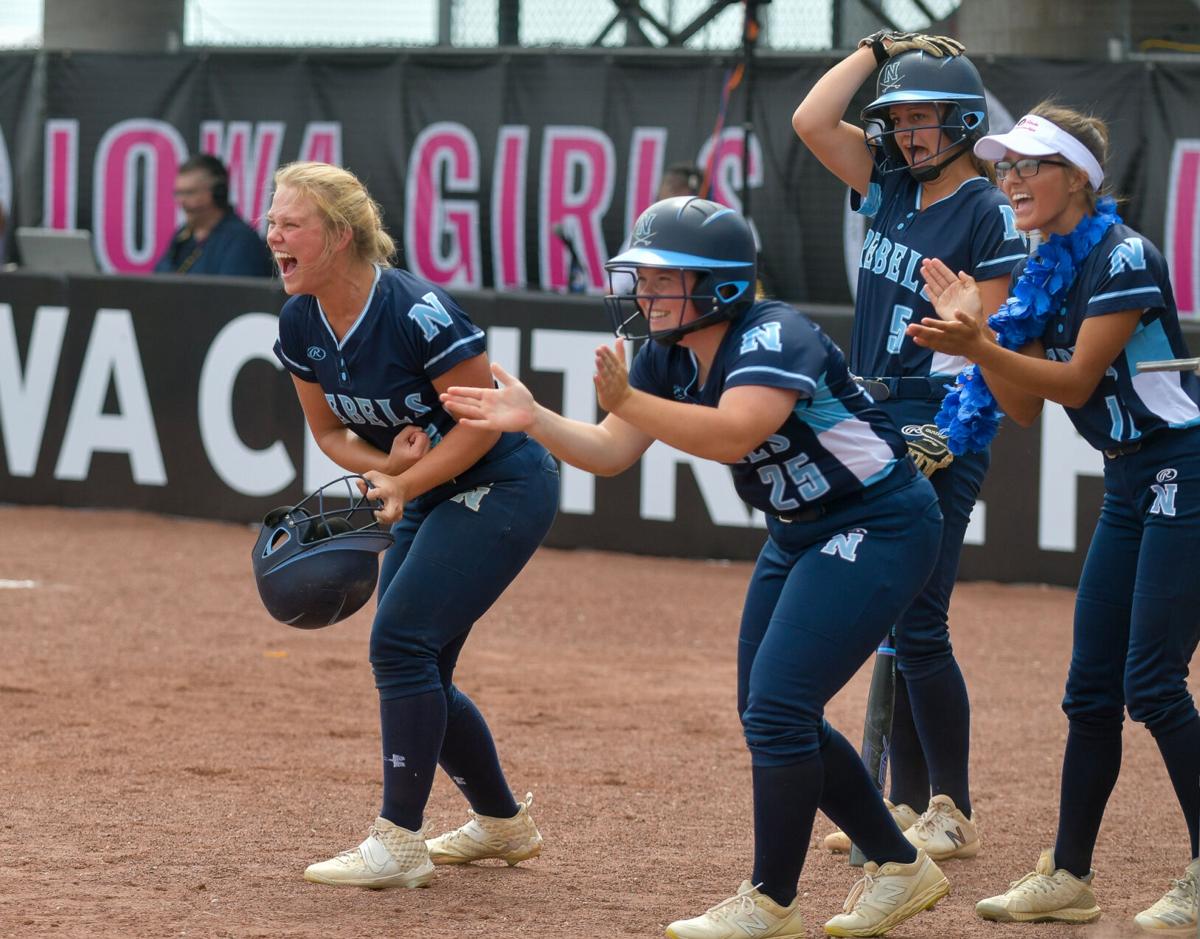 Northeast’s Audrey Morris and Makenna McDonald, along with other members of the bench, react to Neveah Hildebrandt’s solo homer in the first inning of Tuesday’s state quarterfinal. The Rebels beat Central Springs 5-4 in walk-off fashion, a single from Hildebrandt driving in the final run. 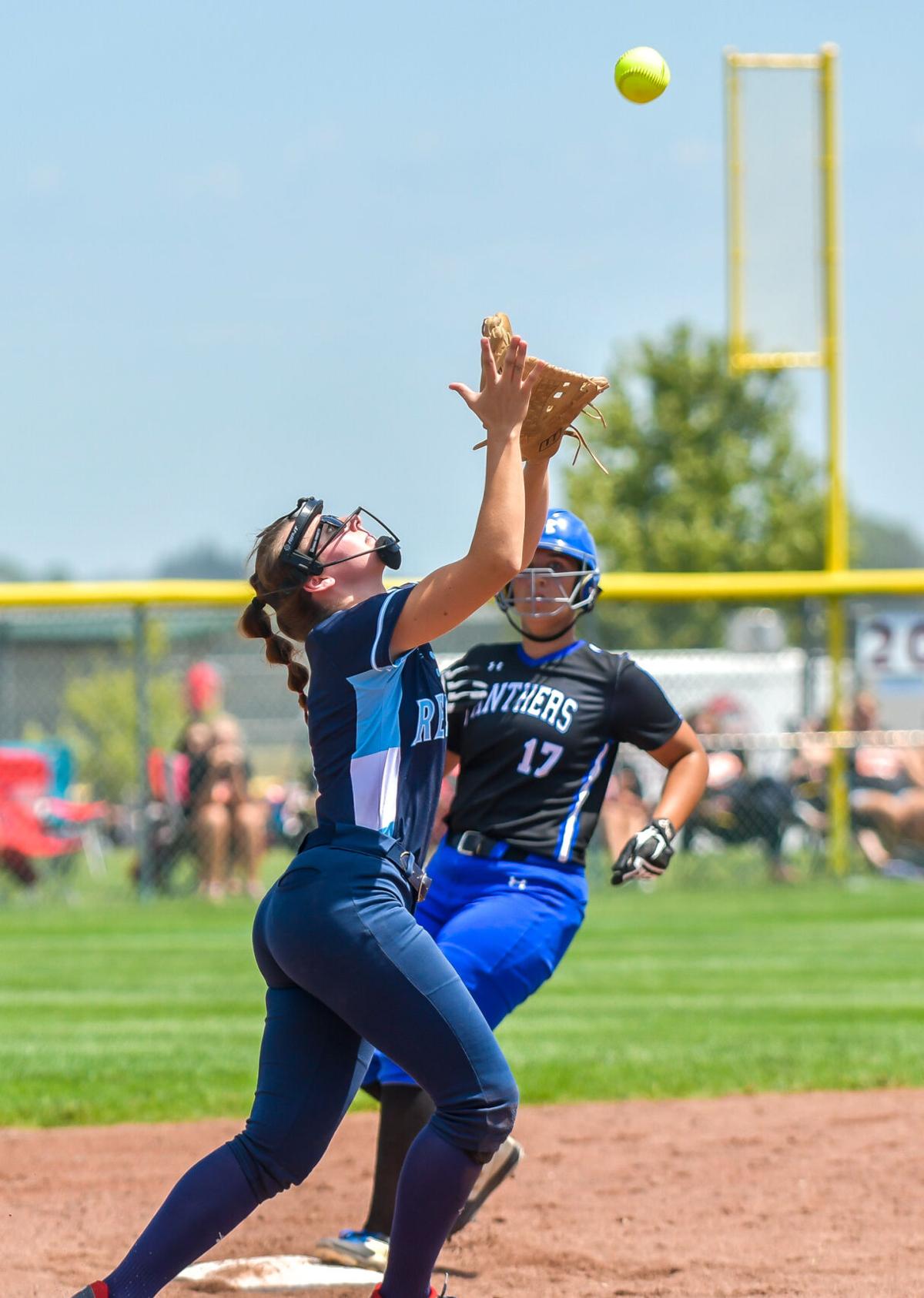 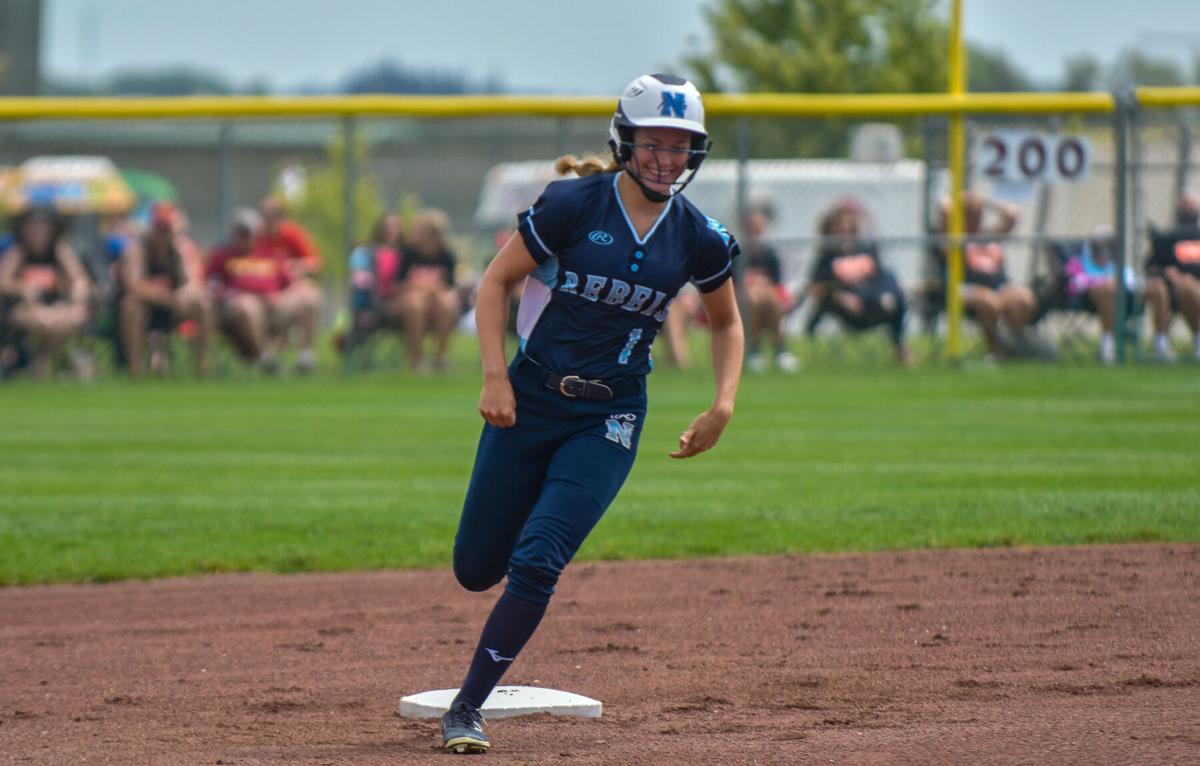 Neveah Hildebrandt rounds third base after hitting a lead-off homer to start the game on Tuesday. 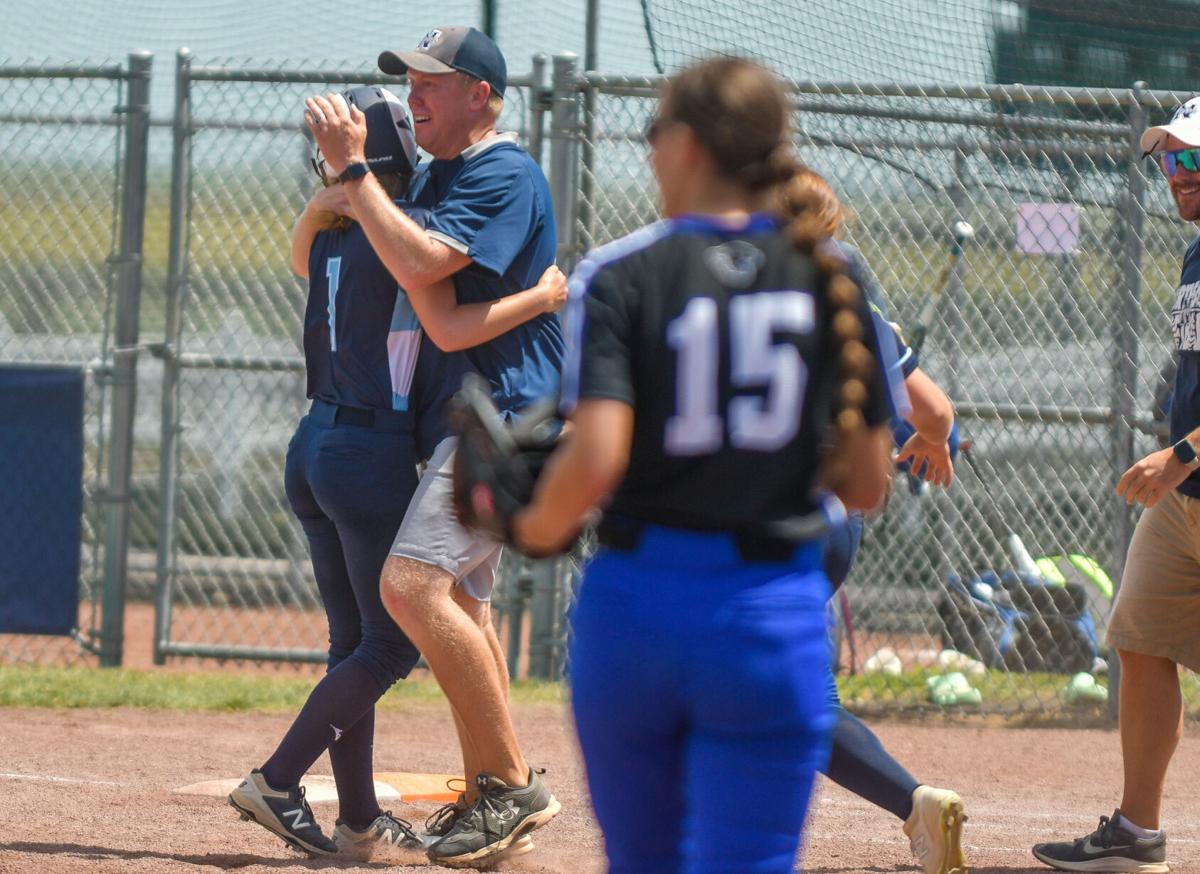 Northeast’s Audrey Morris and Makenna McDonald, along with other members of the bench, react to Neveah Hildebrandt’s solo homer in the first inning of Tuesday’s state quarterfinal. The Rebels beat Central Springs 5-4 in walk-off fashion, a single from Hildebrandt driving in the final run.

Neveah Hildebrandt rounds third base after hitting a lead-off homer to start the game on Tuesday.

FORT DODGE – With a runner on third and two outs in the bottom of the seventh, it was the time for something to happen for the Northeast softball team.

Northeast and Central Springs had been tied at 4-4 for three innings in the Class 2A state quarterfinal game on Tuesday afternoon. After a one-out double from Madison Kluever and a chaotic sequence of throws and baserunning, Elizabeth Chambers was the sole runner on base with Neveah Hildebrandt up to bat.

“I was just thinking stay calm, don’t get nervous,” Hildebrandt said. “It’s not the end of the world if we don’t score because we have really good [defense] to back us up.”

Immediately following the final run, head coach Travis Eversmeyer was the first one on the field, greeting Hildebrandt off first base with a hug before returning to the dugout to let the rest of the team celebrate.

“It’s just an exciting time,” Eversmeyer said. “Game winning hit, state tournament, that’s something they’ll remember the rest of their lives whether they were in the play or not.”

The Rebels were loose and calm before the first pitch and throughout the seven innings. After the game, they admitted they felt like the underdogs as they took on the school’s first ever state softball appearance. The energy in the dugout and on the field never indicated nerves along with that.

Hildebrandt had also kicked off the scoring early in the game. Very first at-bat, Hildebrandt knocked a ball over the left-center fence off of Panther pitcher Cooper Klaahsen.

“It felt great knowing that it was going to get our team going,” Hildebrandt said. “One of the big things about our team is that once we start getting those hits, we just keep going and keep going.”

That same inning, Claire Abbott drew a walk that turned into a run off of a double from Makenna McDonald to give the Rebels a 2-0 lead.

Abbott had a stellar night at the plate as well, dominating the small ball for Northeast. After her first walk, she bunted twice successfully, one of them scoring a run in the third inning.

“When we need it [small ball], it’s there,” Abbott said. “It’s something we can always count on.”

The third inning run was part of a comeback effort the Rebels faced after falling behind 4-2. Abbott’s saceifice was followed the next inning by a solo dinger from senior Audrey Morris to tie everything up at 4-4.

Not surprisingly, defense was a key for the Rebels from the start. First contact of the game tipped off of pitcher Madison Kluever’s glove but was snagged by short stop Alexis Ehlers. Ehlers turned the play for the out, which kicked off an impressive defensive effort throughout the whole game.

“It was exciting,” Ehlers said. “There were a lot of emotions going through my head. I was pumped, I couldn’t believe it just happened, but after that I really settled in. The first play was under my belt and we were good to go.”

The outfield was sent a lot of balls of the bats of the Panthers, leaving Makenna McDonald, Neveah Hildebrandt and Kayelee Hansen on their toes the entire contest. They made several key outs, and when hits did find the grass they turned them back fast to avoid giving up extra bases.

The defense helped the Rebels stay out of more trouble. The Panthers put a base runner on every single inning, leaving Kluever and the Rebels in charge of finishing the outs with no extra runs allowed.

“A big this we preach to Maddie [Kluever], especially being as young as she is, is that she doesn’t have to strike everyone out,” Ehlers said. “We got her. I think that’s a big thing. We know we’re there behind her back and we have to stand to that.”

That rolled right into the seventh inning. The Panthers placed two runner on base, both drawing walks from the pitches of Kluever. From the dugout, Coach Eversmeyer was calling out the team’s mantra: E + R = O. That’s Event + Response = Outcome.

The Rebels responses, Kluever working batters until a pop fly ended the inning to give Northeast their last at-bat.

‘They’ve known since Day 1 that we’ve been preaching that. We’ve made it a really important part of our program to focus on the mental side,” Eversmeyer said. “It let’s them know that their mind has to be right, clear the clutter, make some plays.”

The Rebels continue their state run on Wednesday night in Fort Dodge. No. 4 ranked Northeast will face the No. 1 ranked North Linn Lynx at 5 p.m.

“Eliminating the big inning,” Eversmeyer said. “We know they live and die by that, they score a lot of runs. What a great opportunity. I want to see the fight I’ve seen all year, not backing down from anybody and go after it.”