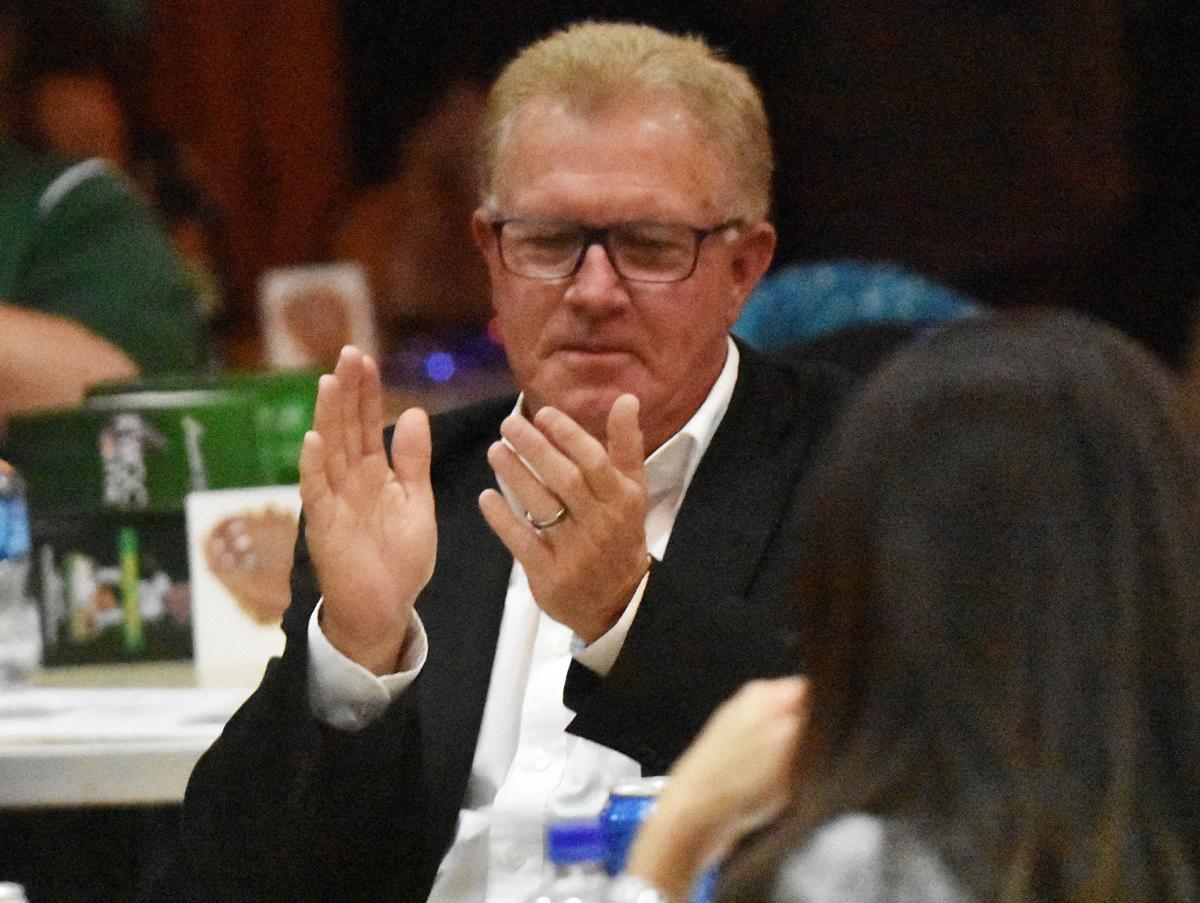 Clinton’s 2020 manager Tom Lawless applauds at Saturday night’s annual Clinton LumberKings Hot Stove Banquet, where he was a keynote speaker to one of the biggest crowds in ten years. 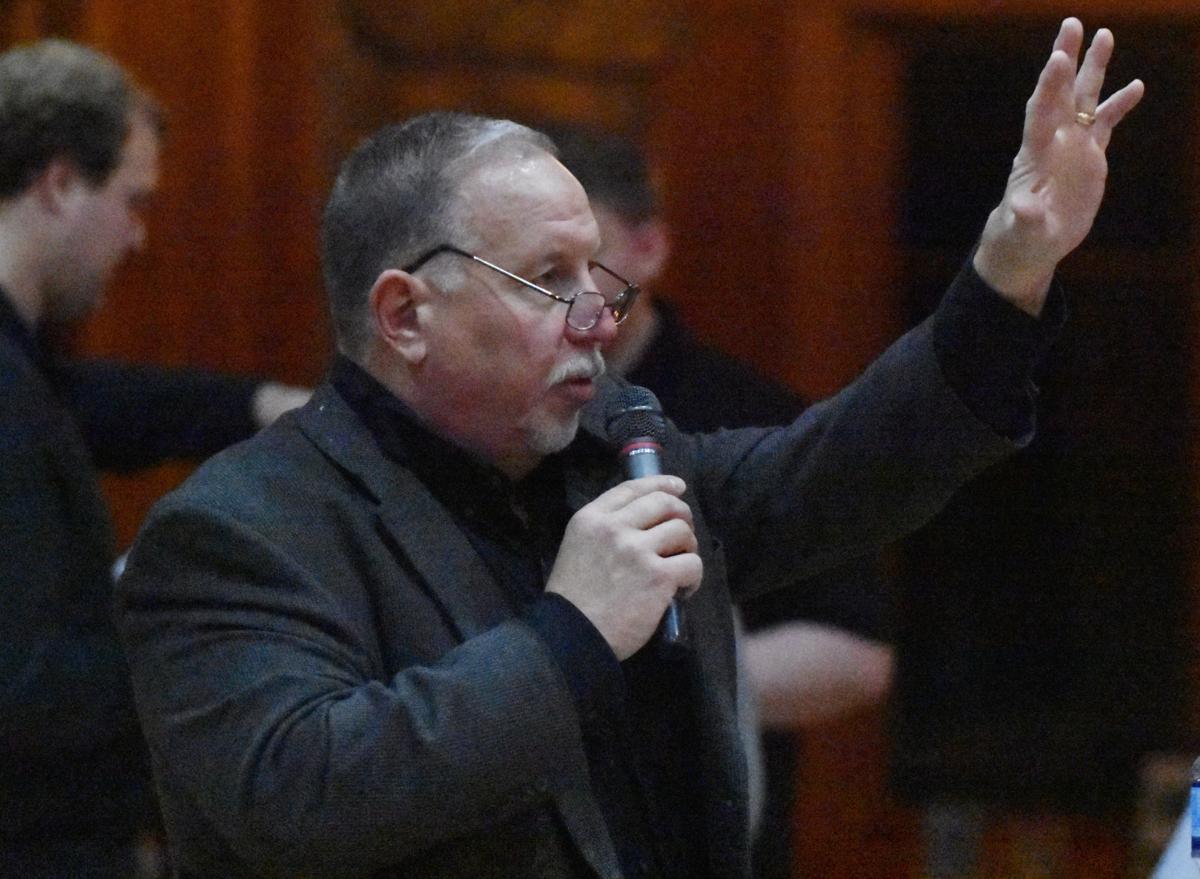 Clinton’s 2020 manager Tom Lawless applauds at Saturday night’s annual Clinton LumberKings Hot Stove Banquet, where he was a keynote speaker to one of the biggest crowds in ten years.

CLINTON – Cold weather and a Sunday Super Bowl did not deter the 56th Annual Hot Stove Banquet from drawing one of it’s biggest crowds in the last decade.

Dozens of tables filled up with Clinton LumberKings’ staff, board members and fans on Saturday night at Eagle Point Lodge, sparking some excitement for the 2020 baseball season and giving fans a chance to ask questions to brand new manager Tom Lawless.

Lawless was the key note speaker of the night.

Lawless played parts of eight seasons in the major leagues, becoming the only player to ever be traded for Pete Rose when he moved to the Montreal Expos in 1984.

One of his most memorable moments for fans was his dramatic home run and bat flip in the 1987 World Series game against the Minnesota Twins.

Lawless is no stranger to the Midwest League. He started his managerial career in 1994, managing the Cedar Rapids Kernels at that time. He also came back in 2000 to manage the Peoria Chiefs, starting his journey to eventually being named the interim manager of the Houston Astros.

He joined the Marlins organization last season, leading the Batavia Muckdogs to the playoffs in the New York – Penn League. Many of Batavia’s players are expected to join the Clinton LumberKings’ roster this season.

“The difference with this league compared to where they’ve been is that they have to do it every day,” Lawless said. “You have to take care of your body and be ready to play every single night. Then get back to it tomorrow. Only the strong survive.”

Lawless characterized himself as an easy going guy, but one that likes to win.

Lawless joked with fans about his home run walk and stories from his days in the big leagues, answering questions they had about baseball, himself and the upcoming season.

He also let fans know what kind of baseball he preaches.

“I’m big on that if the personnel, and if the boys can do it, then we run,” Lawless said. “We run, we bunt and hit the ball, and we play the way we grew up knowing how to play the game. We play fundamental baseball.

The LumberKings are coming off of an appearance in the Midwest League Championship Series in 2019. Some of the coaching staff will be back, and the Marlins reiterated their excitement about the state of the farm system.

“We have a steady trend,” Assistant Miami’s Director of Player Development Hector Crespo said. “We have five players in the top hundred prospects of all of baseball. Three playoff teams last year. Exciting things happening in our system and we plan to continue to grow and field great teams on the field.”

The biggest questions of the night were addressed by general manger Ted Tornow when he opened up the banquet. Tornow, who is in his 22nd year with the LumberKings, immediately addressed the dispute between Major League Baseball and Minor League Baseball, and the proposed plan to cut 42 teams, including Clinton’s.

“The guys in New York City and the ones who want to do this …I’d love to tell you that there is one reason we’re on that list but I can’t,” Tornow said. “I’ve never heard one that says why we’re on that list.”

Tornow continued to talk about all the improvements that have been made over the last decade at NelsonCorp Field. He talked about the million-dollar pump system that they’ve worked with the city to install that will help during flood seaosn. He boasted about the big renovations coming to the visitor’s clubhouse this very season, all bringing a round of applause for the LumberKings and the Friends of Riverview Stadium.

Tornow verified to fans that lacking up-to-date facilities will not be a reason the LumberKings are in danger.

“That’s not going to be an issue here in the next couple weeks,” Tornow said. “We’re taking care of that.”

A big part of the night was a video made by the Midwest League that showcased highlights from the season before, and sent a message from the president Dick Nussbaum.

Book-ending the video on either end was the phrase “It’s not just a game when it’s this close to home.”

Tornow, along with other speakers and the video, encouraged fans to continue speaking up on the issue and writing those involved. You can find more information on our website, clintonherald.com.

“A lot has been said. There are a lot of high emotions in this whole thing. Everyone has a story,” Tornow said. “It’s passion and it gets to the bone. If you want to do something, look at that website, send your voice.”

President of the Clinton Board of Directors Paul Davis and Clinton mayor Scott Maddasion told their own baseball stories and restated the same thing. Maddasion has joined a mayor’s task force with community mayors from across the nation to work to protect the teams.

“I’m not going to worry about the future,” Tornow said. “Today’s problems are their own. I trust our negotiating team .. and I know our fans are some of the best in the league. We’re going to have a great future in 2020, 2021 and on and one and one.”