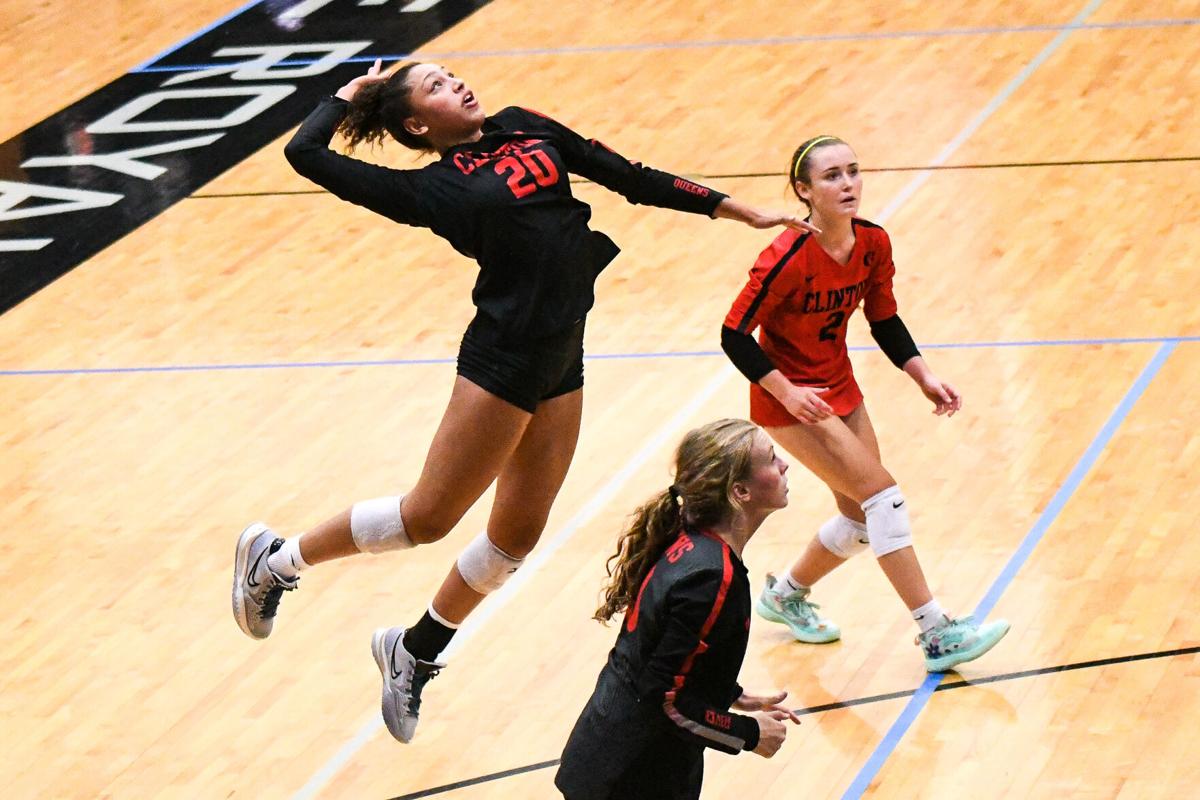 Clinton’s Makayla Howard leaps for a back row attack during the River Queen Invite earlier this year. 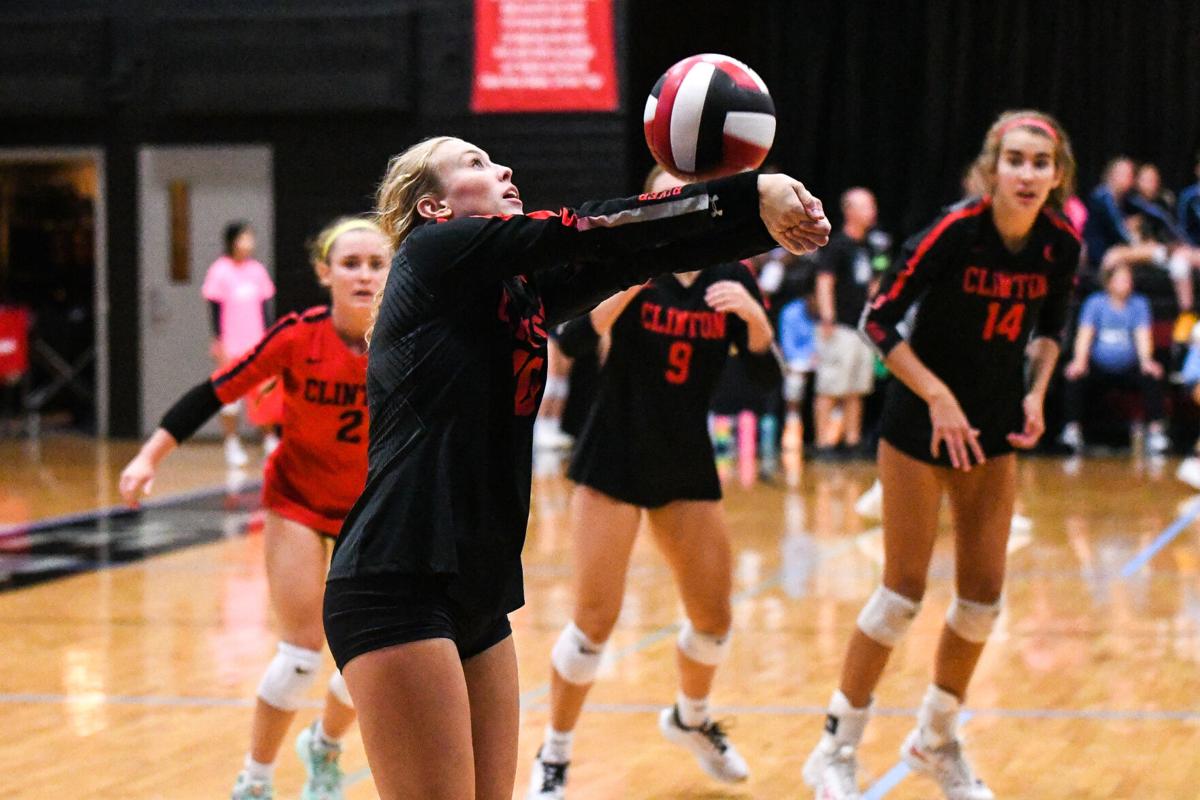 Clinton’s Jamie Greenwalt passes up a ball during the River Queen Invite earlier this year. 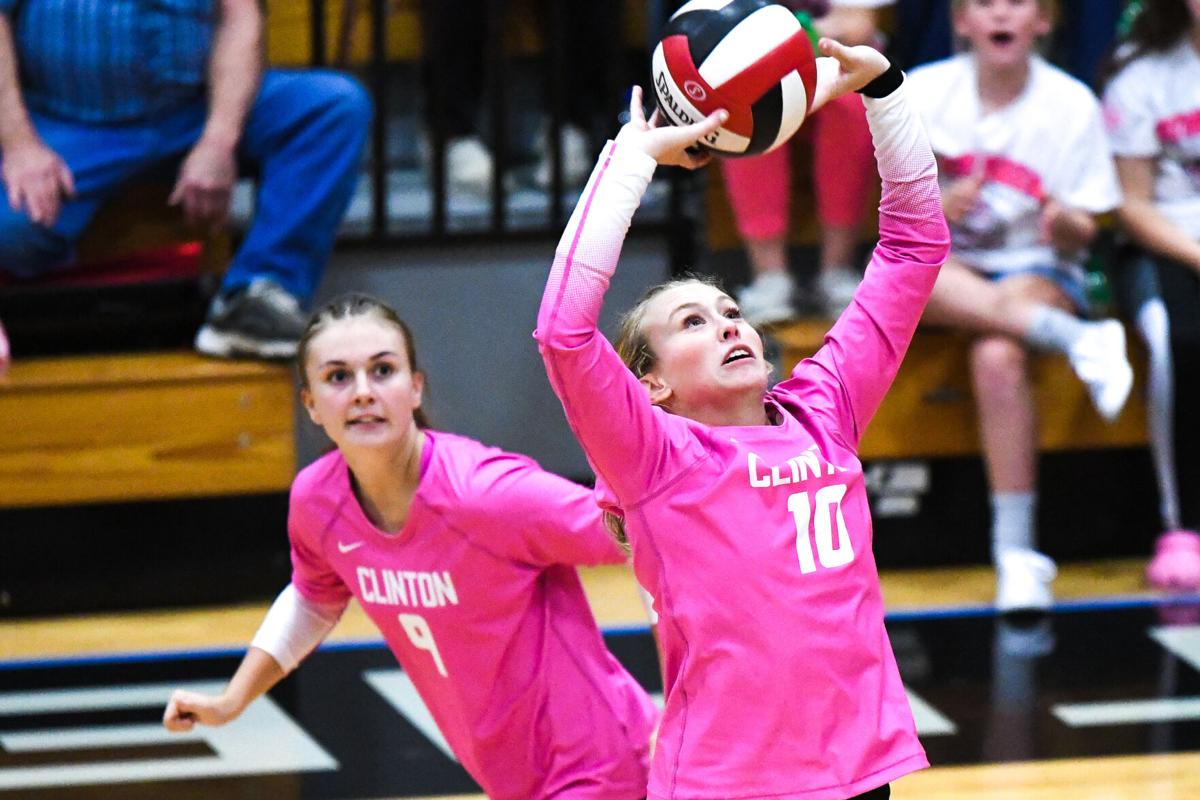 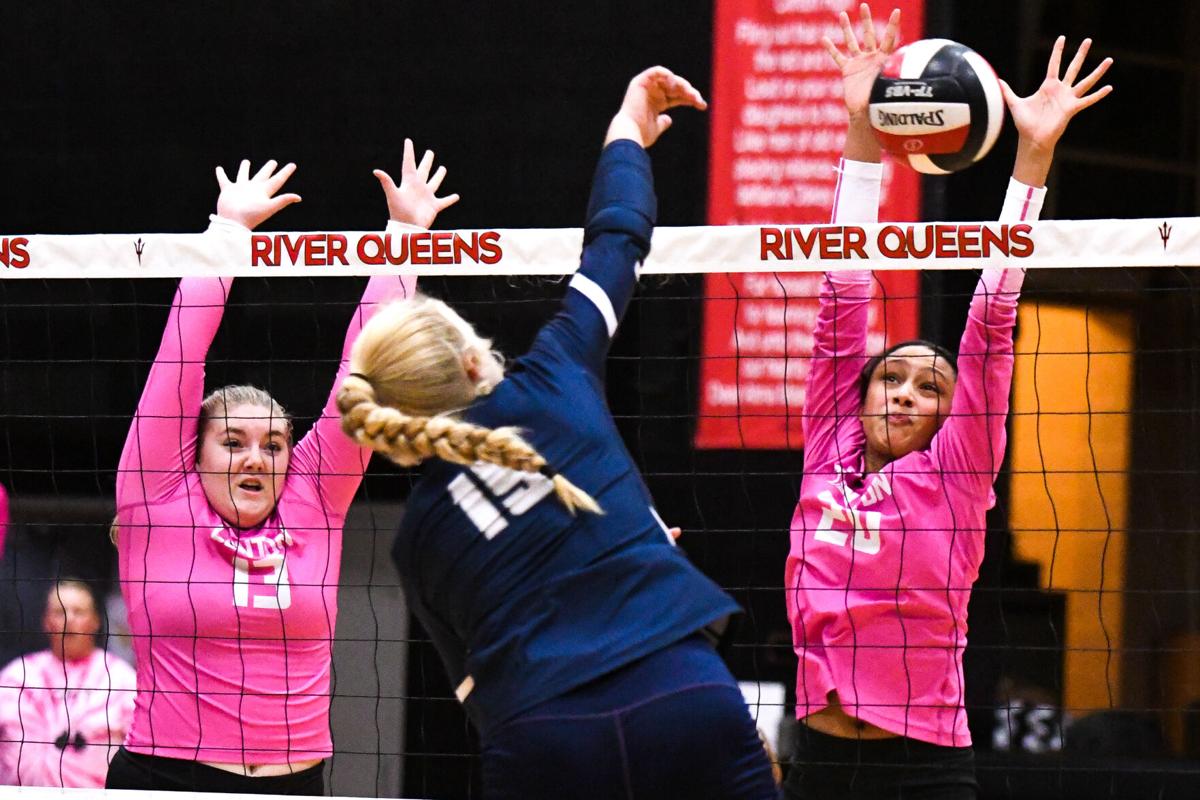 Clinton’s Noel Randecker and Makayla Howard jump for a block during the River Queens’ 3-0 loss to Pleasant Valley Thursday night.

Clinton’s Makayla Howard leaps for a back row attack during the River Queen Invite earlier this year.

Clinton’s Jamie Greenwalt passes up a ball during the River Queen Invite earlier this year.

Clinton’s Noel Randecker and Makayla Howard jump for a block during the River Queens’ 3-0 loss to Pleasant Valley Thursday night.

The River Queens had a lot of adjustments to make coming into the 2021 season, but there was one constant for them.

The duo of Jamie Greenwalt and Makayla Howard was back for a second consecutive year and has been leading the Clinton offense. The two led the offense in 2020 as well and the chemistry they’ve built is apparent on the court.

“Our team and our coaching staff really relies on those two,” head coach Micah Cewe said. “Jamie dishes out the assists, Makayla pounds the ball, puts it away and terminates. Without those two, we’re a totally different team.”

Howard, an outside with a dominant swing, has a put-the-ball-away mentality every time she takes a swing. It’s helped her to be third in the Mississippi Athletic Conference in kills this year with 260.

Greenwalt also ranks third in the MAC with 531 assists.

“Makayla and I have been on the same team since my sophomore year. Having each other there on the court and working together for so long has really helped us build this connection up to the varsity level. We work so well together. She’s a great teammate and I always look for her. I have so much confidence in her and I know she can put the ball down when I need her to.”

Both have reached major milestones this year as well. Greenwalt hit 1,000 career assists and Howard notched 500 career kills with the River Queens.

It’s been something for the River Queens to look to all year. The experience they bring to the court has been imperative for Clinton.

It’s not without help, of course. The River Queens have a lot of experience in the front row and Greenwalt says it’s one of her favorite parts of being a setter for this team.

“I know I can place any of my hitters in any position and I know I have confidence in them,” Greenwalt said. “We can put them anywhere and we can put the ball down.”

“Sometimes our team can get in the habit of watching when the ball goes to Makayla instead of covering,” Cewe said. “But we have to give credit to our other hitters. They’re running their routes to distract those blockers and that helps out Makayla.”

The River Queens had a roster shakeup after losing a number of talented defensive specialists last season. The back row has been where the Queens have consistently struggled throughout the year.

Both Greenwalt and Howard take their turns on the defensive end. They rank one and two on the team for digs.

“We know we don’t have the same defense as last year,” Howard said. “We’ve tried to really focus in and know that we need to have a pass. We have all these big hitters up here and it’s hard to see when we can’t get a pass. When we do, it boosts our confidence and makes us work harder to get those good passes up.”

The offensive consistency, though, has come primarily from the dynamic duo. Howard has attempted nearly double the attacks of any other River Queen, keeping errors to a minimum and boasting a kill efficiency of over 21 percent. Howard is often the go-to in tight situations when the River Queens are looking for that kill or momentum changer.

Clinton is in the thick of the Class 4A postseason. After beating Maquoketa at home on Tuesday, the River Queens have a tough test ahead of them Thursday night. They travel to Western Dubuque High School to take on the No. 1 team in the state.

“When we go downhill, things are going downhill, everything breaks apart and it seems we can’t do anything at all,” Howard said. “When we come together as a team, we’re passing, we’re setting, we’re putting balls away it feels really good. We need to focus on that.”