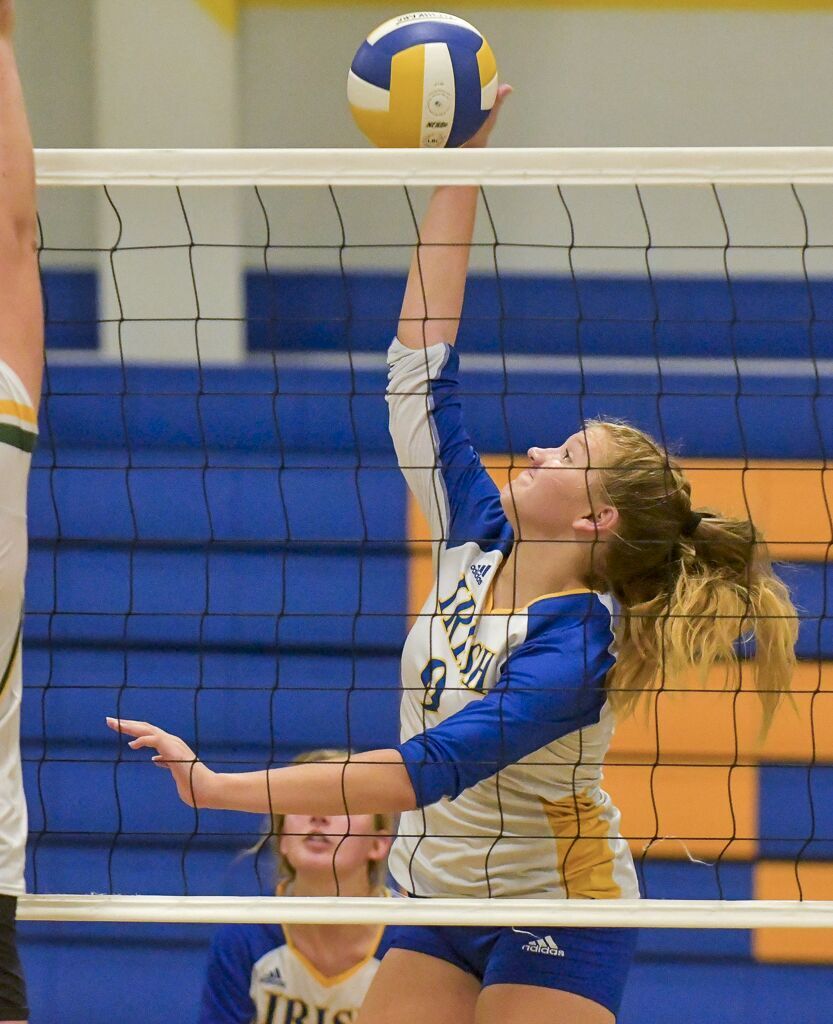 Prince of Peace sophomore Shannon Kenneavy attacks a ball during the No. 14 Irish volleyball team’s season opener – a round robin tournament at home. The Irish finished second, losing only to Dubuque Hempstead in their opener. 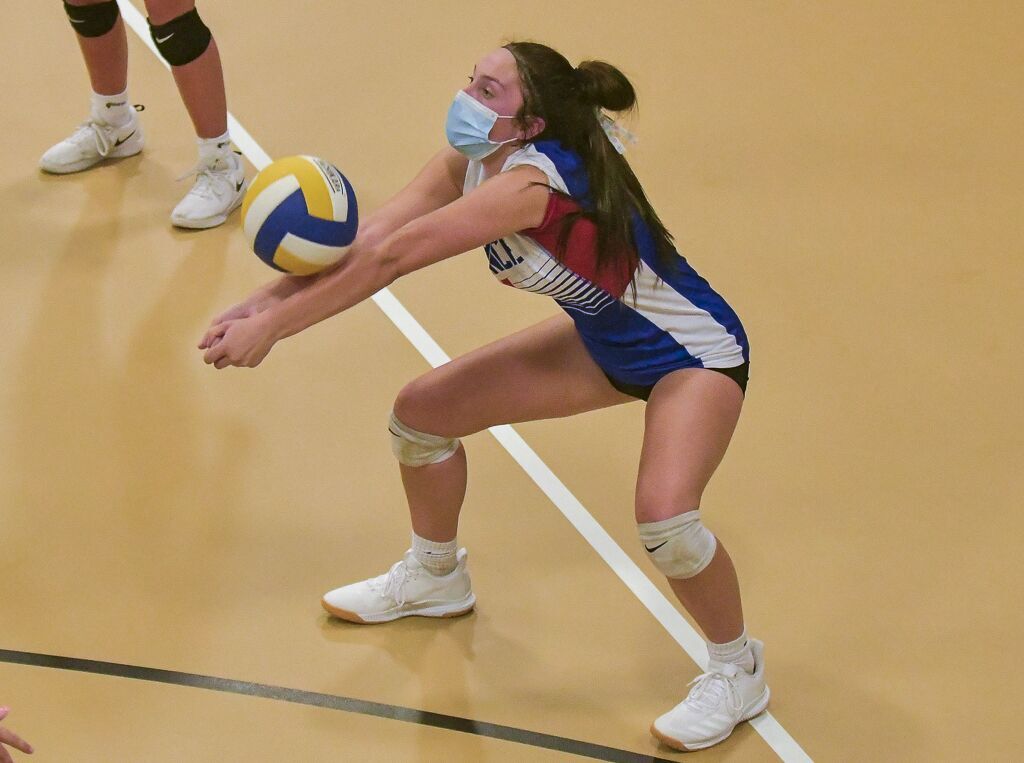 Camanche’s Aubrey Carstensen passes a ball up during the Indians’ season opening tournament at Prince of Peace on Thursday night. Camanche finished third in the tournament, beating Calamus-Wheatland.

Prince of Peace sophomore Shannon Kenneavy attacks a ball during the No. 14 Irish volleyball team’s season opener – a round robin tournament at home. The Irish finished second, losing only to Dubuque Hempstead in their opener.

Camanche’s Aubrey Carstensen passes a ball up during the Indians’ season opening tournament at Prince of Peace on Thursday night. Camanche finished third in the tournament, beating Calamus-Wheatland.

CLINTON – Season openers can be rough for teams as the rust is shaken off and lineups get used to playing together.

But that wasn’t the case on Thursday night in Clinton for the Prince of Peace volleyball team. The Irish came out strong, proving why they earned a No. 14 spot in the preseason volleyball rankings.

Their only loss of the night came at the hands of Class 5A No. 9 ranked Dubuque Hempstead, leaving the Irish in second place of their home, round-robin tournament.

“I am excited,” head coach Stacie Kenneavy said. “Usually we have a scrimmage the first week where we get to see bigger schools and knock the rust off, but practices have been going well and I had high hopes for tonight. I was very impressed with what I saw.”

In the championship game, the two battled back and forth. Hempstead, who features a powerful front row with plenty of experience, sent huge swings over the net at the Irish. Prince of Peace used their defense to stay scrappy and stay in the game.

Each team took leads and each team featured comeback efforts, but it was the Mustangs who prevailed 21-19, 21-18.

The first matchup between the two ended tied 1-1 (no third sets). The Irish fell behind early in Set 1, but kills from Isabel Hansen and Sarah Moeller put the Irish up 9-6.

A huge hustle play on both sides ended in the Irish’s favor. The back row went diving for ball after ball, never assuming the play was over until it landed on the floor on the Mustang side. It put the Irish up 14-11.

The pair ended up tied 19-19 before Shannon Kenneavy put away a point. The Irish ended on top 23-21 on a Hempstead error.

“They’e always been scrappy,” Kenneavy said. “They’re fast, athletic girls. We mixed up the lineup a little bit so I was a little worried, but I like what I saw.”

The Irish also took down Calamus-Wheatland (21-10, 21-17) and Camanche (21-18, 21-14) in dominant fashion. Prince of Peace was consistently attacking from every rotation and every spot on the floor. Back row attacked came from Anabel Blount, quick sets from the middle came off the arm of Lily Isenhour, and Isabel Hansen tipped balls into the middle of the court.

“We’re trying to preach this year that it doesn’t matter who is on the other side of the net,” Kenneavy said. “We never think, oh, this is an easy team. It’s only our side that we’re worried about.”

The Camanche Indians were also making their season debut in the tournament, but they felt the rust of the offseason each step of the way. By the end of the night, they were playing their best volleyball to take down Cal-Wheat in two sets for third place out of the four teams.

“I think that we had a lot of nerves coming into this,” head coach Heather Clark said. “We struggled a little in all aspects to start.”

They kicked off the night with Dubuque Hempstead, where they lost quickly in two.

Hempstead’s big block gave the Indians’ fits. Their lineup is significantly shorter than in the past few years, and many are learning to hit from new positions. The Indians lost outside hitter Tarah Wehde to graduation and middle Lauren Snyder to a family move.

“All of our hitters can go into multiple spots because there isn’t a lot of height,” Clark said. “Our goal is just to get some touches on the ball so it’s easier on our back row to play it up.

“This year we just have to be really ready to play and really flexible with the lineups.”

The first sets against the Warriors were still slow. The pair split the match 1-1, with the Indians looking a step slow on defense in the first set falling 21-17.

The Indians started attacking more in the second set. Maci Sloane put some away in the middle, while Aubrey Carstensen impressed with some smart hitting off the block. The Indians won their first set 21-15 before falling the Irish in the next match.

“It’s hard with school schedule, too,” Clark said. “Half of our girls are at school and half are sitting at home. It’s something we haven’t adjusted to and we have to figure out how we can all come and get ready to play. I think we were a step slow but as the night went on we picked it up and got ready to move.”

The No. 14 Irish and the Indians both return to action this Saturday, heading to Central DeWitt for some tournament play. The pair meet again next Tuesday in at home for a full, non-conference match.

Simpson shot a 35 (-1) on his home course to earn the meet medalist title. The River Kings took on North Scott and Davenport Central, finishing second overall as a team.

Clinton is back in action next Wednesday, traveling to Emeis Golf Course for a multi-team varsity invite in the Quad Cities.

Josh Vanderploeg was the meet medalist, golfing a 41.

“It wasn’t very pretty but it was still a win,” Fulton head coach Kevin Ver Hoeven said. “Josh continued his consistent play and the others did enough. It will be nice to have a couple days off after three meets in four night in ninety degree temperatures.”

Patrick Wiebenga was next with a 42 for Fulton, and then Ian Wiebenga with a 44. Landon Meyers shot a 50.

The Steamers were coming off of a meet where they fell to conference foe Riverdale by just a few strokes. That meet on Tuesday saw the Steamers finished at 165, while the Rams finished 159. They did beat Orion, who finished with a team score of 207.

Patrick Wiebenga was the meet medalist that day with a 35.

“We played okay by when you go up against a state caliber team like Riverdale you have to be better than okay,” Ver Hoeven said. “It is disappointing because except for a couple of bad holes, we would have had the win.”

DEWITT – Before the first Friday night kickoff, Central DeWitt has had a change in their football schedule thanks to the coronavirus pandemic.

The season opener was originally supposed to take place between the Sabers and Maquoketa this Friday, but Maquoketa came back with a positive COVID-19 test. That effectively cancels the game – Maquoketa will not play for two weeks.

Central DeWitt did manage to add a game. They will be playing Ottumwa on Friday night instead in order to still have their season opener.