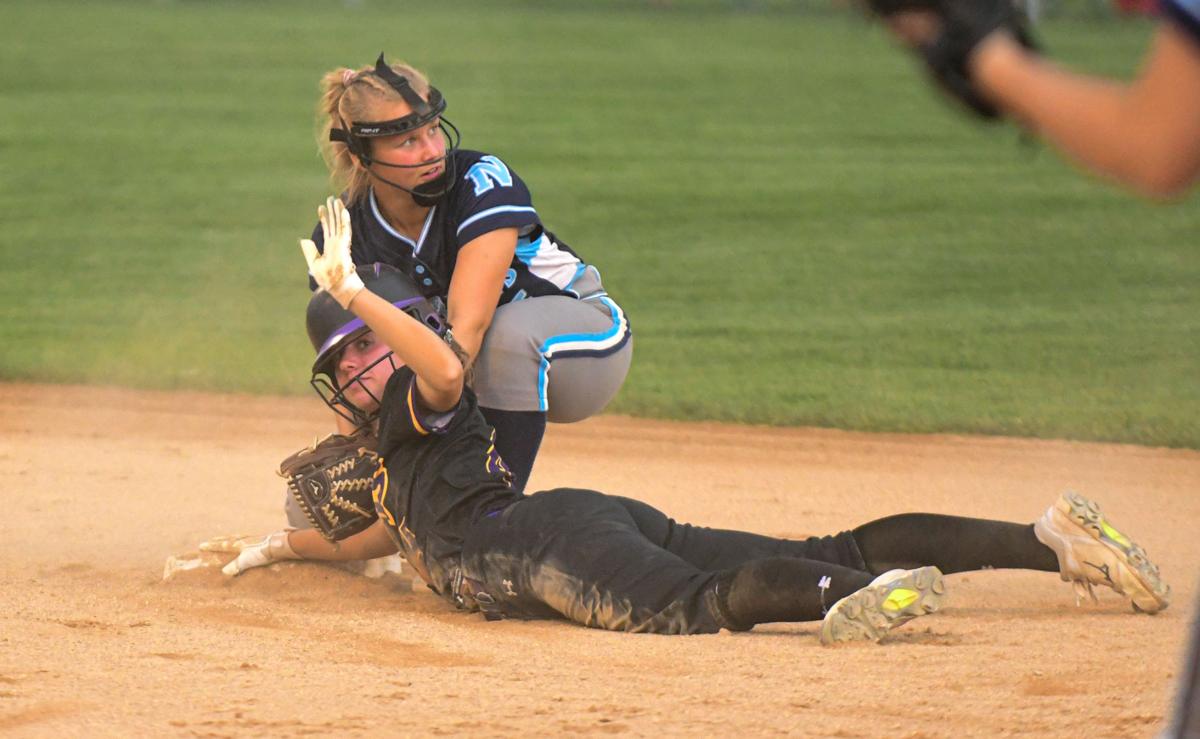 Northeast’s Audrey Morris attempts a tag out on a Central DeWitt baserunner at second during the Rebels’ sweep of the Sabers on Tuesday night. 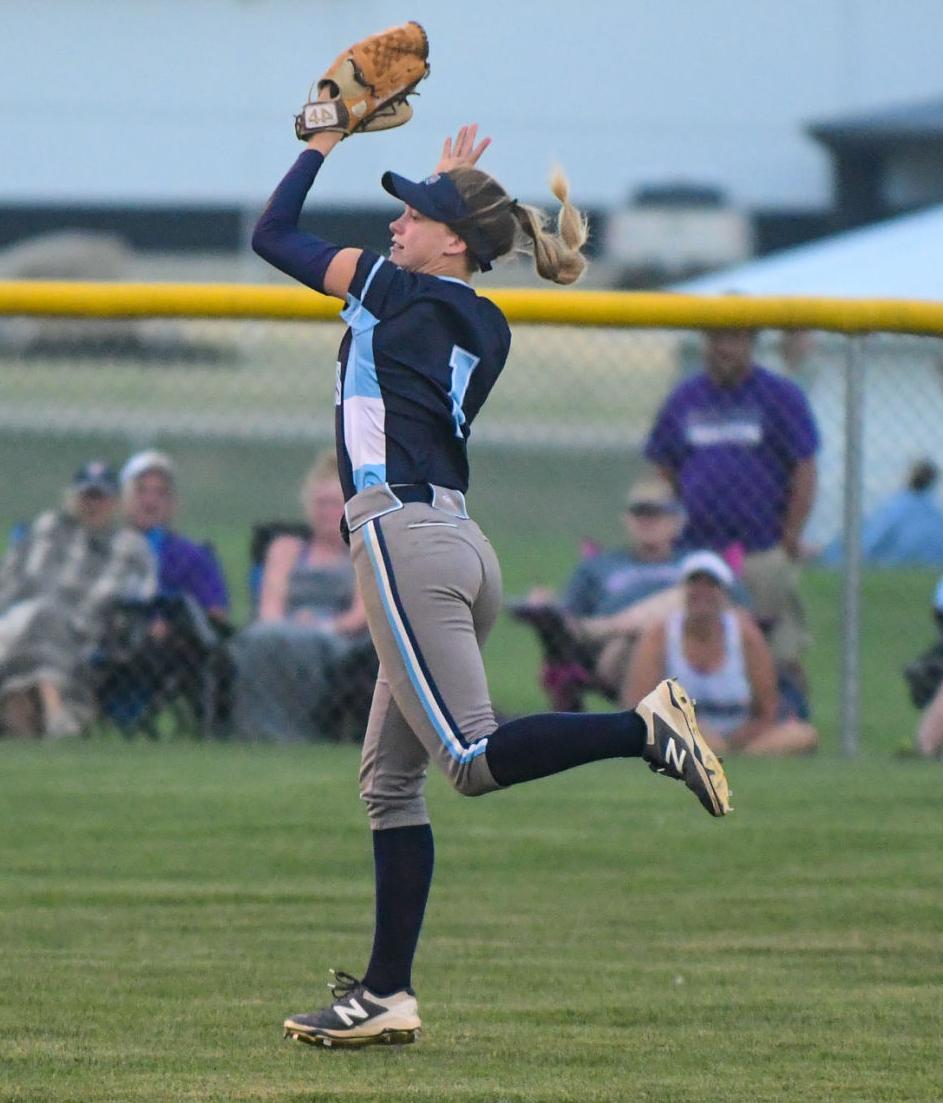 Northeast’s Neveah Hildebrandt jumps for a catch in center field during the Rebels’ doubleheader with Central DeWitt earlier this year.

Northeast’s Audrey Morris attempts a tag out on a Central DeWitt baserunner at second during the Rebels’ sweep of the Sabers on Tuesday night.

Northeast’s Neveah Hildebrandt jumps for a catch in center field during the Rebels’ doubleheader with Central DeWitt earlier this year.

GOOSE LAKE – With the bases loaded with Central DeWitt baserunners and no outs, it looked like the Sabers were going to put up some crooked numbers against the No. 4 ranked Northeast softball team.

But that wouldn’t be the case.

Neveah Hildebrandt caught a pop fly in center field and launched it back in to hold all runners at their spots. The next contact off Northeast pitcher Madison Kluever bounced in the infield.

The ball was snapped to catcher Bree Mangelsen at home for the force out and then whipped back up the line to first baseman Claire Abbott for the double play.

It had head coach Travis Eversmeyer commenting all the way back to the dugout.

“They believe that the ball is going to get hit to them hard and they have a lot of talent,” Eversmeyer said. “There’s no denying that. This year has been all about mindset and they really haven’t folded when things get hard for them.

“I can’t say I’m overly shocked but each night they’re doing something that makes you go alright, we’re getting there.”

It helped lead the Rebels to an impressive sweep of Central DeWitt. After stopping the Sabers in their comeback effort in the sixth inning, the Rebels took Game 1 by a 6-2 margin. The second contest featured a quick lightning delay, but then the Rebels finished the night off with a 13-1 four-inning victory.

The defense helped them take Game 1. Neveah Hildebrandt led off with a single in the first inning, eventually crossing home for a run, but that 1-0 lead was all they could muster through the first two innings.

They added four runs off five hits in the third inning.

“Our offense was aggressive from the start of the first game,” Eversmeyer said. “We hit the ball really well tonight, put pressure on them on the bases, got bunts down when we needed to. One through nine, it’s a tough lineup right now.”

The Sabers got on the board in the top of the fourth, an RBI double from Talbot Kinney scoring their first. They ended up with 11 hits throughout the first contest, leaving 10 runners stranded.

In Game 2, offense was rolling for the Rebels from the start, many balls finding their way into the holes in the outfield. Even after a 30-minute break in the action thanks to lightning in the distance, they kept their momentum going. A grand slam from Neveah Hildebrandt and then an RBI double from Bree Mangelsen ended the second contest prematurely.

“Even the girls who were struggling a couple weeks ago are starting to come into their own,” Eversmeyer said. “I don’t even know how you attack it pitching ... there are a lot of numbers, and they’re good numbers.”

Central DeWitt had baserunners throughout the night, the Northeast defense holding them in their spots.

Madison Kluever pitched the first contest, and Alyssa Pessman threw the four innings of the second.

Central DeWitt falls to 9-11 and played West Delaware on Wednesday night at their home field.

DAVENPORT – After taking an early lead, the Bettendorf Bulldogs came surging back against the Camanche baseball team, taking the game 4-3.

The Indians, ranked No. 8 in Class 2A, saw Bettendorf on Tuesday night at Modern Woodman Park, home of the Quad Cities River Bandits.

The Indians had moved to a 3-0 lead over the Class 4A Bulldogs through the first four innings. In the bottom of the fifth, Bettendorf singled twice off pitcher Cade Everson and then an infield error loaded the bases.

Another single cut the lead to 3-1. The Indians made a change at the mound, but new pitcher Zach Erwin walked the first batter he faced, scoring another.

One more single before the end of the inning gave Bettendorf the 4-3 lead heading into the sixth.

Camanche did manage to load the bases in the top of the seventh in an attempt to take back the game, but all three runners were left stranded.

Cade Everson and Zach Erwin both batted in runs for the Indians. They managed five hits on the day, four of them coming from the bottom of the lineup.

The Indians struck out six times.

Brayden Lodge started the game on the mound for Camanche, pitching two innings and allowing just one hit and no runs. Logan Shaw came in for relief and allowed two hits, no runs in hi two innings of work.

Cade Everson gave up three two hits and three runs, two of them earned. Erwin allowed the other run to be scored.

Mike Delzell finished out the game with one inning of work, walking two but giving up no hits or runs.

The Indians fall to 10-4 on the season. With a conference game against Regina cancelled, the Indians will turn their attention towards the postseason. They host their first round of districts next week (June 14) at Gus Witt Field against the winner of Durant and Northeast.