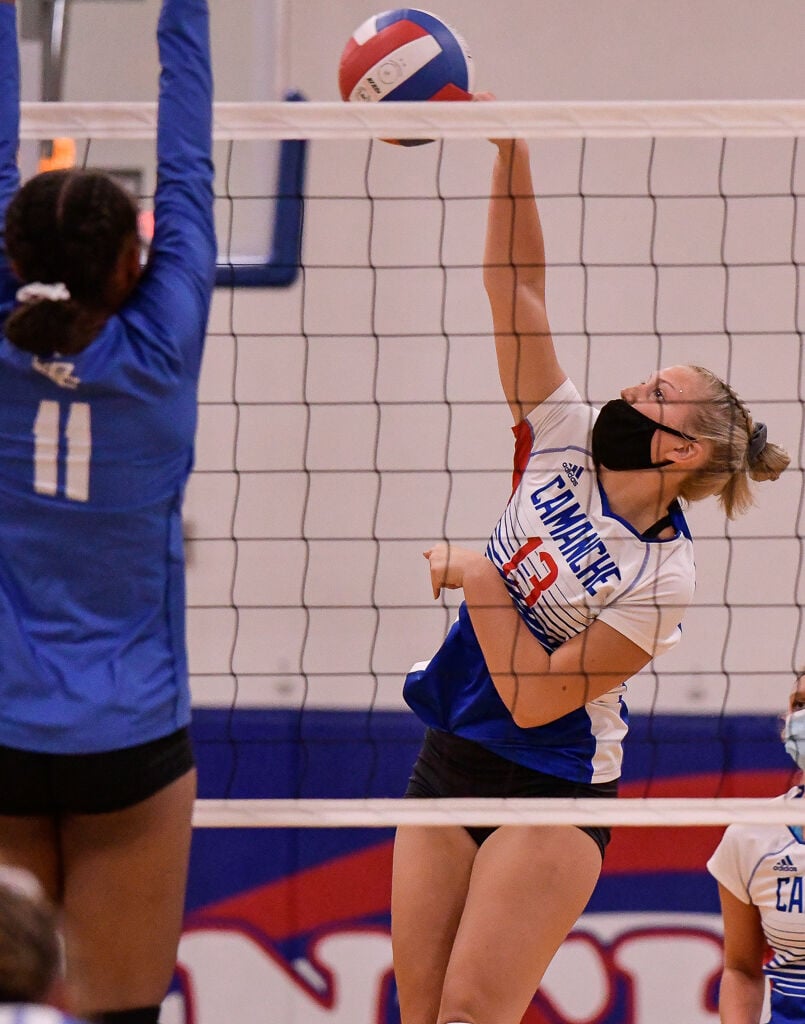 Camanche senior Emy Seeser attacks the ball during the Indians’ 3-2 win over Bellevue on Thursday at home. Seeser finished with 12 kills on the night and added 10 digs.

Camanche senior Maci Sloane and junior Aubrey Carstensen go up for a block against Bellevue on Thursday night, where the Indians picked up their first River Valley Conference win 3-2 over the Comets. Sloane led the Indians with 16 kills in the five set victory.

Camanche senior Emy Seeser attacks the ball during the Indians’ 3-2 win over Bellevue on Thursday at home. Seeser finished with 12 kills on the night and added 10 digs.

Camanche senior Maci Sloane and junior Aubrey Carstensen go up for a block against Bellevue on Thursday night, where the Indians picked up their first River Valley Conference win 3-2 over the Comets. Sloane led the Indians with 16 kills in the five set victory.

CAMANCHE – Some big swings came off the arms of some Camanche seniors on Thursday night, leading the Indians to a 3-2 thrilling conference victory over Bellevue at home.

It was a fun thing to see, partly because it was one of the first times the Indians felt like they were playing their game.

“I’m very proud of the girls and how they stuck with it,” Camanche head coach Heather Clark said. “This was the first time through the first tournaments and game at Prince of Peace where I did not see them shut down and be OK with the mistakes they were making.

In a final tie-breaker fifth set, the Indians worked their way to an 11-5 lead. The Comets put down four straight points and sent the Indians to a timeout.

Clarke kept it short. Just four points away from their first River Valley Conference win, senior Emy Seeser came out and capped off a long rally with a kill down the line.

A Bellevue net call put them one point closer.

The Comets got a side out, but then served one into the net. A final push into the corner from senior Maci Sloane threw the Comets off enough that they couldn’t send it back over, and the Indians took the final set 15-11.

“It’s exciting getting the first home game win,” Sloane said. Sloane finished with a team-high 16 kills on the night. “I think we all started off the fifth set a little nervous but once we got going we started to play our game. We pushed hard and played our best.”

The start was slow for Camanche as they got their first RVC play under their belt. They’ve played two tournaments and one non-conference 5-set match, picking up just two wins in that time.

By the time they got halfway through the second set they had some momentum. Senior Emy Seeser put one away, and then Sloane finished the set off with an ace.

Seeser added 12 kills on the night along with Sloane’s 16.

“Maci and Emy were both hot tonight,” Clark said. “We talk to them about being leaders. We have seven seniors, and I think they did a good job of stepping up and taking control of the team.”

It helped that serve receive looked good in the back. Another area where the Indians have struggled as of late, they made minimal mistakes in the five sets. It sent plenty of attacks to the net.

“I was feeling it. If it wasn’t for those passes and sets I wouldn’t have gotten those hits,” Sloane said. “I think we played good for our first home game. We had three goals coming in, and I think we did our best to get there.

“When we swing, that’s how we push and get points,” Sloane said. “We need to swing every time.”

Sloane put down two huge kills as part of a four-point run to start the third. Kills from Aubrey Carstensen and Seeser once again ended things in favor of the Indians.

The fourth set got shaky again. The Indians jumped out to a six-point lead but then watched the Comets claw their way back. Bellevue ended on their own six-point run to complete the comeback.

A trio of serving errors and a number of attacks into the net plagued Camanche in the fourth and throughout the match. The service errors reached double digits on the night.

The Indians (3-5-1) stay at home, turning their attention to their own invitational on Saturday morning.