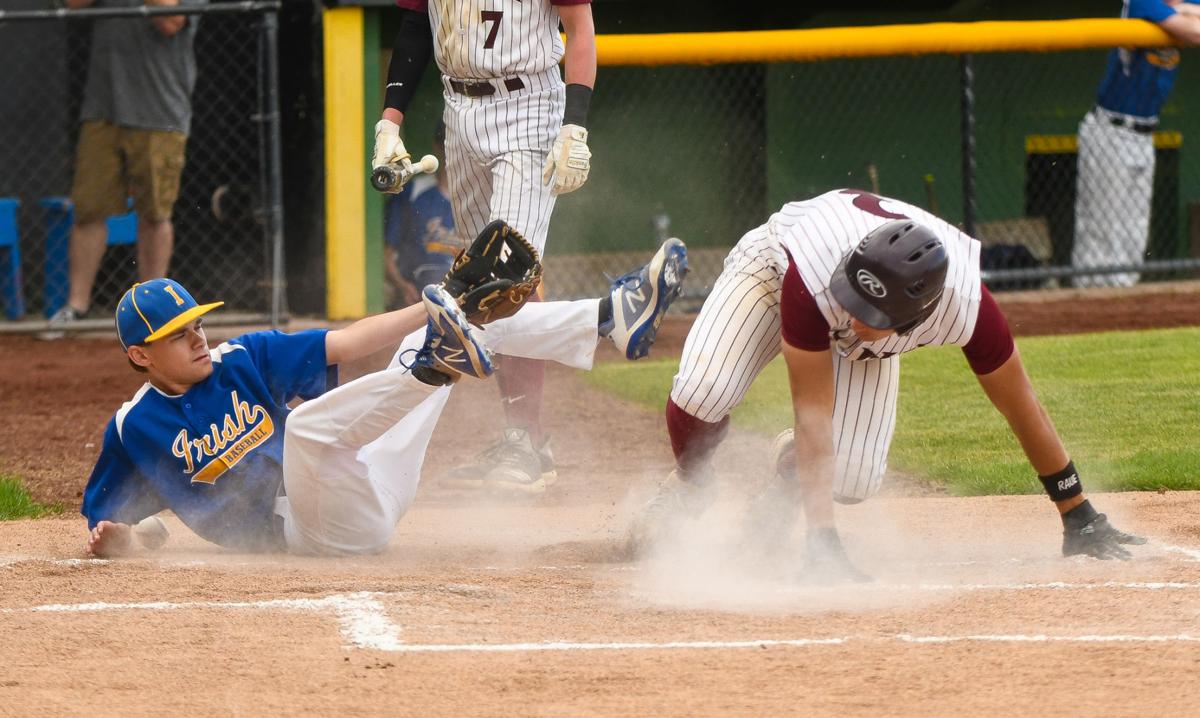 Prince of Peace’s Brody Dehner falls into the dust after attempting to tag out a runner at home after a passed ball. The Irish dropped two games to the No. 2 ranked North Linn Lynx on Wednesday night. 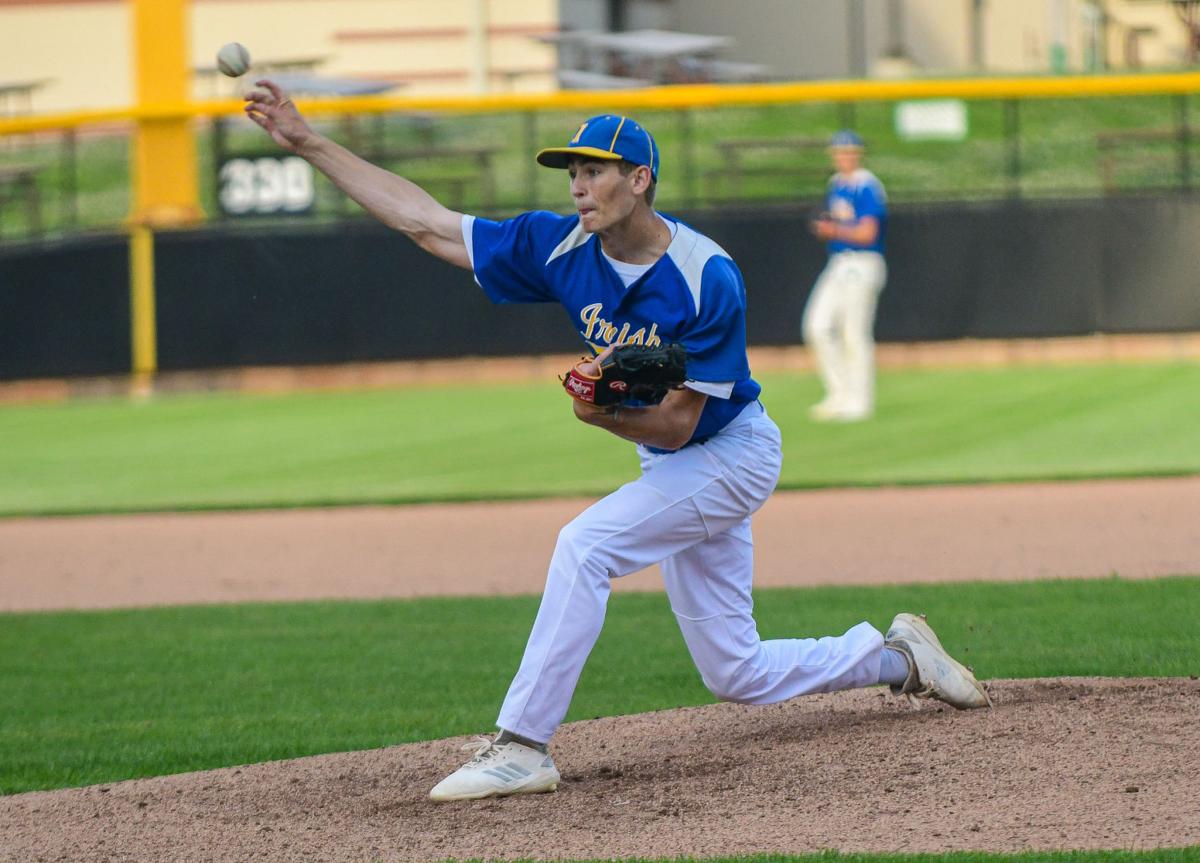 Prince of Peace junior JR Wauford delivers a pitch during Game 2 of the Irish’s doubleheader against North Linn on Wednesday. 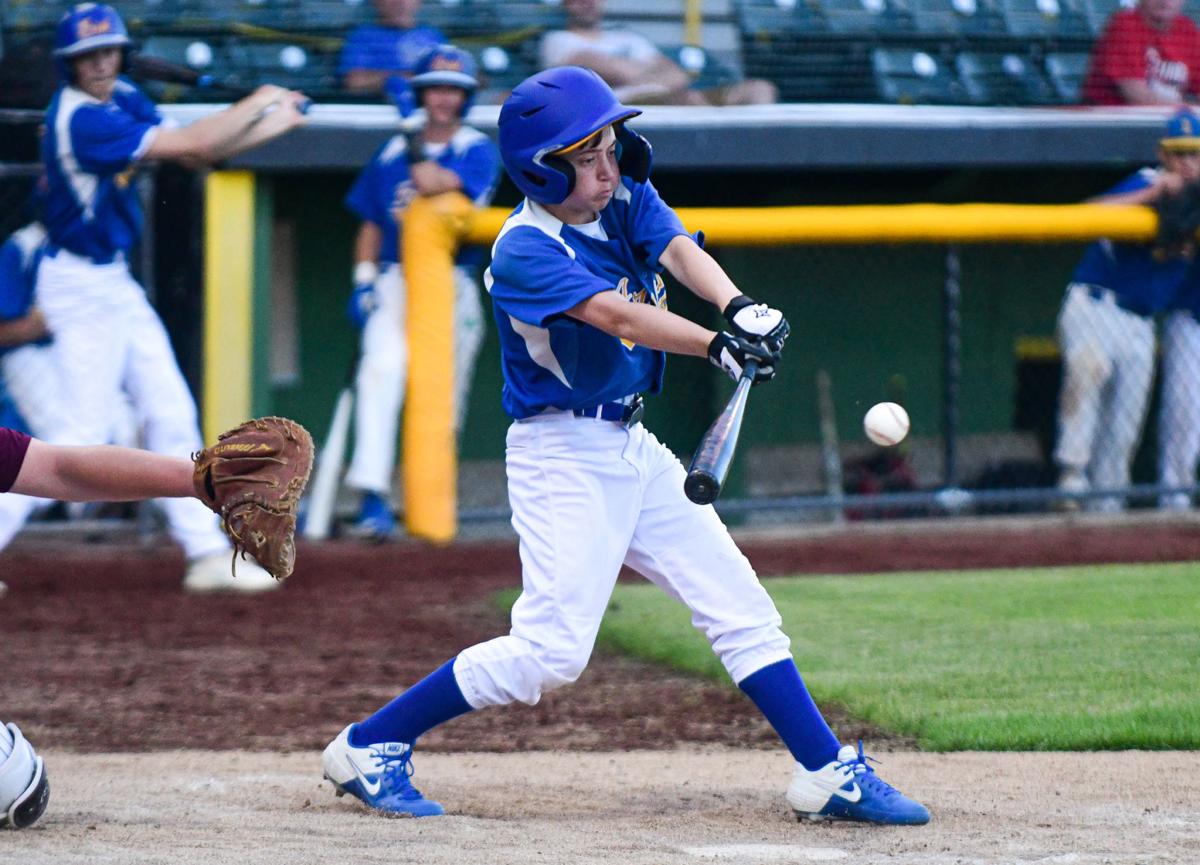 Prince of Peace’s Eric Berry swings at a pitch during the twinbill against North Linn on Wednesday night at NelsonCorp Field.

Prince of Peace’s Brody Dehner falls into the dust after attempting to tag out a runner at home after a passed ball. The Irish dropped two games to the No. 2 ranked North Linn Lynx on Wednesday night.

Prince of Peace junior JR Wauford delivers a pitch during Game 2 of the Irish’s doubleheader against North Linn on Wednesday.

Prince of Peace’s Eric Berry swings at a pitch during the twinbill against North Linn on Wednesday night at NelsonCorp Field.

CLINTON – In both of the Prince of Peace baseball team’s games on Wednesday night, the Irish struck first for an early lead.

And in both games, the No. 2 ranked North Linn Lynx proved too much to handle, surging back to take both of the Tri-Rivers Conference contests from the Irish at NelsonCorp Stadium.

The Irish knew they had their hands full coming into the contest, which was originally scheduled for Monday but was washed out. The Lynx have yet to lose a game, running over opponents and often by double digits. In 2019, North Linn took down Prince of Peace 11-0 and 17-0.

Pitching and defense wrote the storyline for the Irish as soon as they took the field at the home of the Clinton LumberKings. Countless errors, passed balls, wild pitches and walks filled both games as a young and inexperienced Irish team took on the state-ranked Lynx.

The very first pitch thrown by Brody Dehner in Game 1 hit the North Linn batter, sending him to the bases. He ended up scoring on a wild pitch just a few pitches later, rounding the bases on his own with baserunning.

In fact, countless Lynx cross home plate off of wild pitches or passed balls in the first contest. The Irish also doled out 15 walks.

Prince of Peace did have a lead early on. In the home half of the first inning, Brody Dehner moved to first after taking four balls. He stole second, and then third, eventually crossing home on a passed ball to put the Irish on the board.

Kyle Sager wore a pitch to make it to first and scored off a JR Wauford line drive down the left field line.

Kyler Wallace added to the score with an RBI single and the Irish took a 3-1 lead into the second inning.

Dehner, just a freshman for the Irish, showed fatigue in the second inning and the Lynx started making contact. He was replaced by Ruden in the middle of the inning but the Irish game up 12 runs.

The bleeding continued into the third with yet another pitcher coming to the mound. The pitching staff never found a rhythm to keep the Lynx at bay, nearly 20 hits littering the final box score.

The Irish’s final run came after Wauford tripled and scored on a Wallace groundout.

Game 2 looked a little different from the get-go. Wauford took the mound with a strong arm and the Lynx didn’t put a baserunner on in the first inning.

That gave the Irish offense a chance to strike first once again. Wauford kicked off the bottom of the first with a double and then Kyle Sager beat out a throw to first for a single. A walk to Brody Dehner loaded the bases. Kyler Wallace popped up a sac fly to score one, and then Gage Ruden doubled to score two more.

Eric Berry capped off the inning with an RBI single of his own to give Prince of Peace a 4-0 lead.

They held it until the top of the third when the Lynx struck back. They plated five runs to take a lead, adding more in the fifth and sixth while keeping Irish bats quiet. The Irish trailed 10-4 heading into the home half of the sixth.

Kyler Wallace started things out in that inning with a single and then the Irish drew two consecutive walks to load the bases. It looked like the Irish were going to cut into the lead, but two straight strikeouts left all three runners stranded.

The Lynx added to their lead with more fielding errors in the seventh.

While the Lynx stay undefeated, the Irish drop to 0-4. They will turn their attention to a twinbill against Starmont High School on Thursday night. Starmont is also winless, and was the Irish’s one win from the 2019 season.