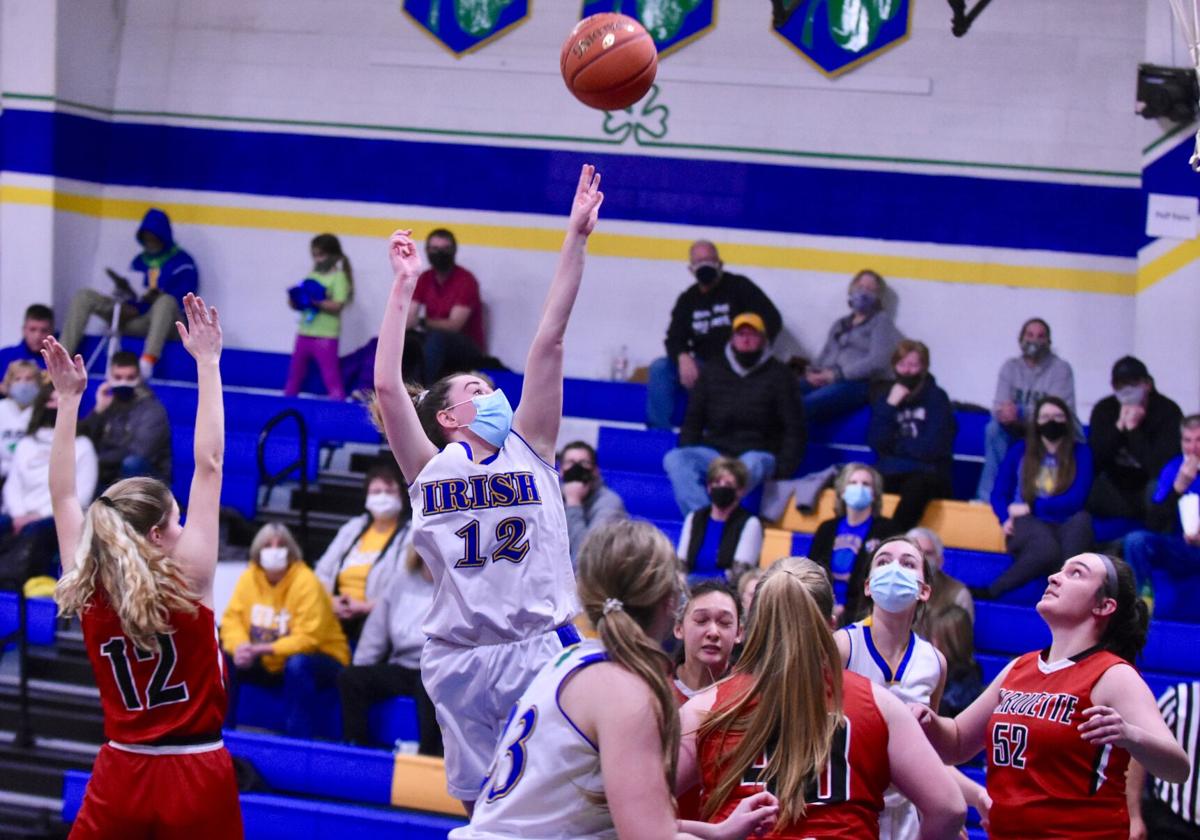 Prince of Peace’s Paige Kuehl (No. 12) puts up a floater over the Marquette Catholic defense during the Irish’s regional win Feb. 16 in Clinton. 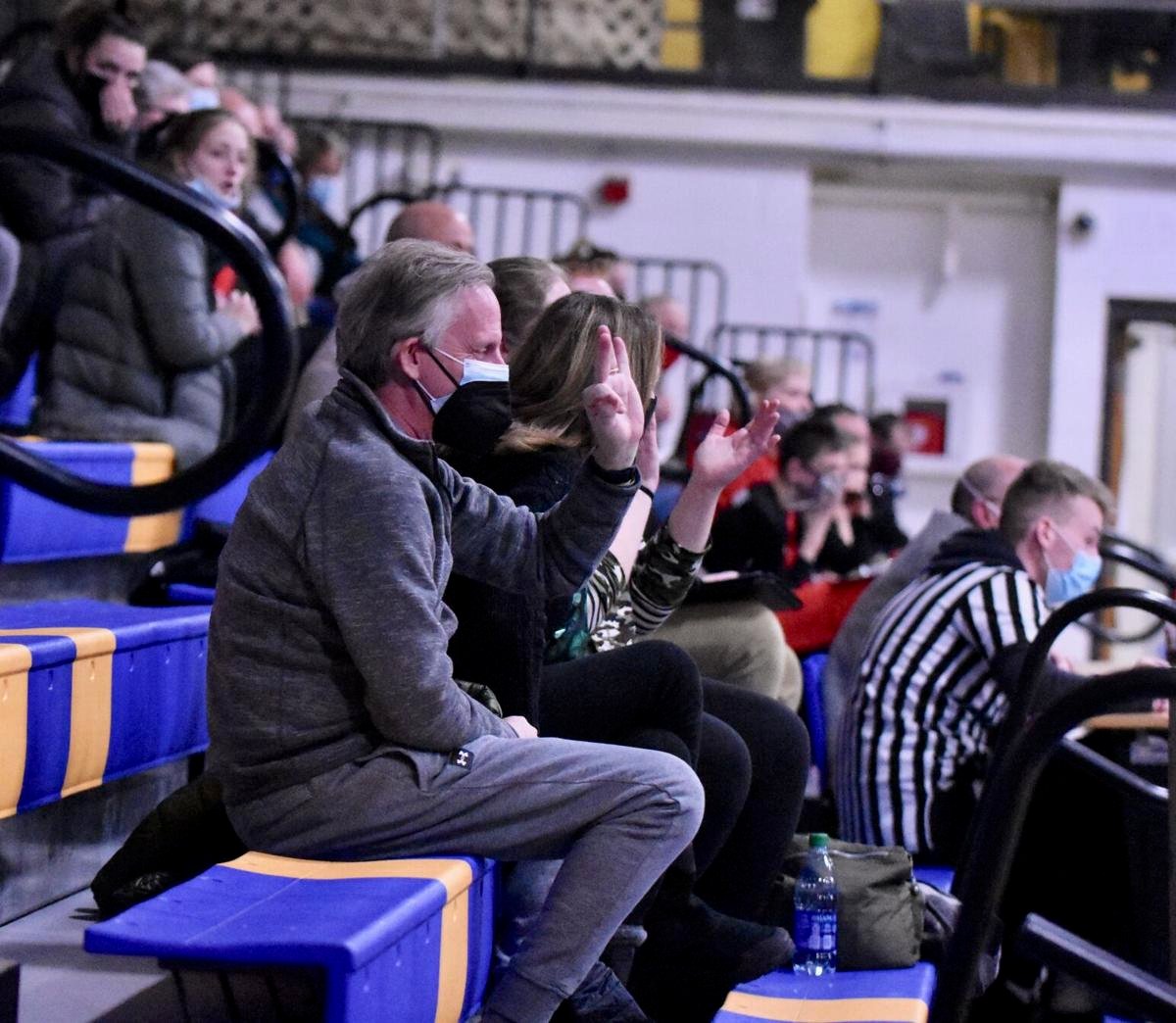 Prince of Peace coach Dave Nelson (center) motions to the Irish bench during their regional quarterfinal win over Marquette Catholic Feb. 16 in Clinton.

Prince of Peace’s Paige Kuehl (No. 12) puts up a floater over the Marquette Catholic defense during the Irish’s regional win Feb. 16 in Clinton.

Prince of Peace coach Dave Nelson (center) motions to the Irish bench during their regional quarterfinal win over Marquette Catholic Feb. 16 in Clinton.

CLINTON — The Prince of Peace girls basketball team defeated Marquette Catholic 61-36 in a Class 1A Region 5 Quarterfinal Tuesday at home, but that wasn’t the only good news of the evening.

Irish coach Dave Nelson, who has not coached the last few games due to an illness, made a return to the Joe O’Donnell Athletic Center and watched the Irish win from the bleachers.

“That was the highlight of the night,” Prince of Peace’s Kaelyn Goodsman said. “We were all really excited to see him because it’s been a while and he brings so much energy. It was really nice seeing him.”

It was a surprise for the team to see Nelson.

“It was pretty unexpected and a lot of emotions were going around,” Blount said. “It gave us so much motivation. Seeing him here was the greatest surprise.”

Though Nelson won’t be returning to his normal spot on the Irish bench anytime soon, he said he was fortunate to watch the team he loves.

“It’s nice getting back in the gym,” Nelson said. “The coaches have done a terrific job. The players have continued to work hard and it showed tonight. It was a nice job. Physically, I’m not up to the challenge yet and I don’t know how long it’s going to be. They’re in good hands and playing great basketball.”

Nelson was diagnosed with Encephalitis, a rare condition that causes inflammation of the brain.

“I’ve got a long road ahead, but overall, pretty positive,” Nelson said. “I’ll be on medication for quite some time and continue to get treatment out at Iowa City, but overall, looking positive but I have to be patient, which is really hard for me.”

“It’s quite rare and mine was even more rare,” Nelson said of his condition. “I was out in Iowa City for two and a half, three weeks and got back a few days ago. Great doctors, great spouse taking care of me. It’s just nice being in the gym tonight. This is a treat.”

The Irish (16-4) took an early lead and never trailed during the win over Marquette. They opened the game on an 8-0 run thanks to buckets from Blount, senior Paige Kuehl and senior Isabel Hansen.

The start of the game was delayed a few minutes after Goodsman vomited near the Irish bench just before tipoff.

“I usually get really nervous, especially in cross country, but I haven’t done that since my freshman year, but I knew it was a really big game and I was pretty nervous and I’m glad with the outcome,” Goodsman said.

Luckily, she was able to recover and was third on the team with 13 points.

“It was just my nerves at the beginning, but then it kicked in and all the fans’ energy really brought us all up and it was really good,” Goodsman said.

“We had really good team play and Marquette’s a rivalry,” Isenhour said. “They’ve had a good team over the years if you look at the number of banners they have, so when you can beat Marquette soundly like we did, it’s a good feeling. Fundamentally, they play sound and our girls closed out. Defensively, I give a big credit to how we closed out.”

Blount led the Irish with 16 points and Kuehl had 14.

The Irish now turn their attention toward Springville in a regional semifinal 7 p.m. Friday night at Springville. Springville previously defeated Prince of Peace 57-54 on Dec. 12 at Clinton.

The Irish have been hoping for a rematch — now they’ve got it.

“We lost by three points and we’ve wanted to play them ever since,” Blount said. “We’re really looking forward to it and we’re going to play our hearts out.”