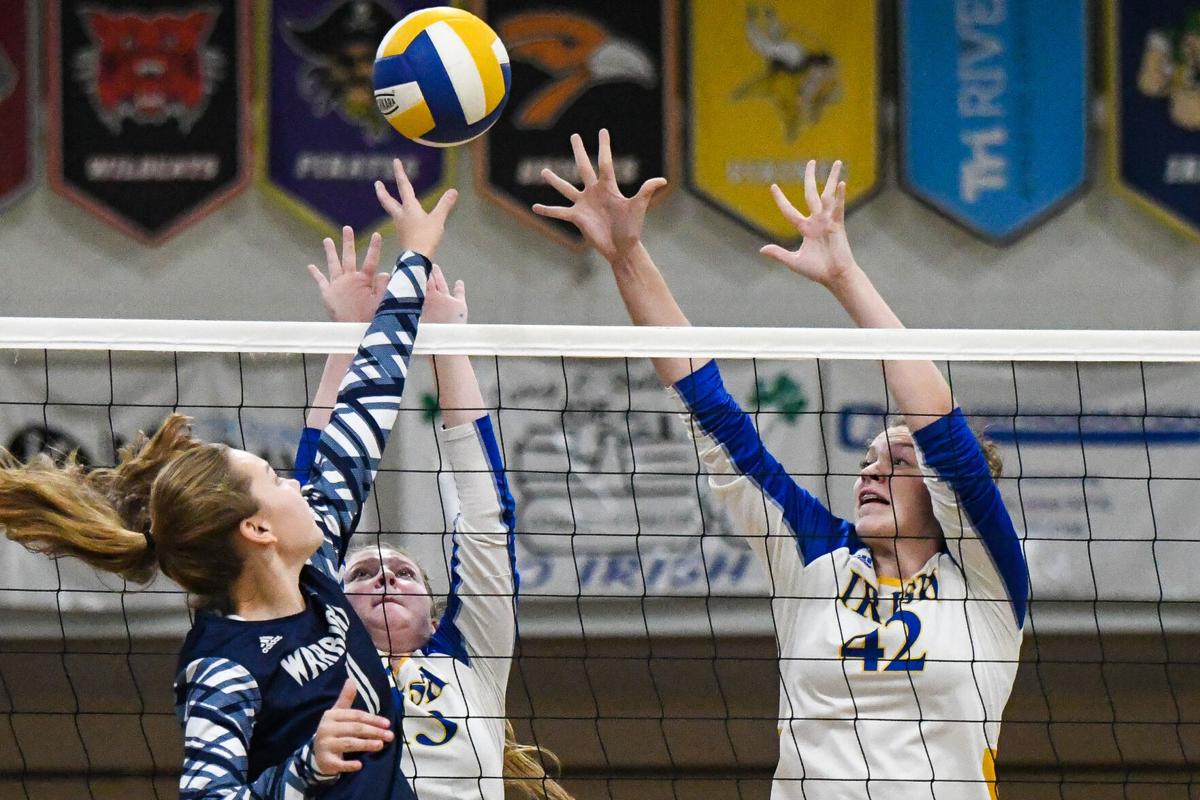 Prince of Peace’s Madison Zachert and Sarah Moeller go up for a block attempt during the Irish’s 3-0 win over Calamus-Wheatland Tuesday night at the Joe O’Donnell Sports Center. 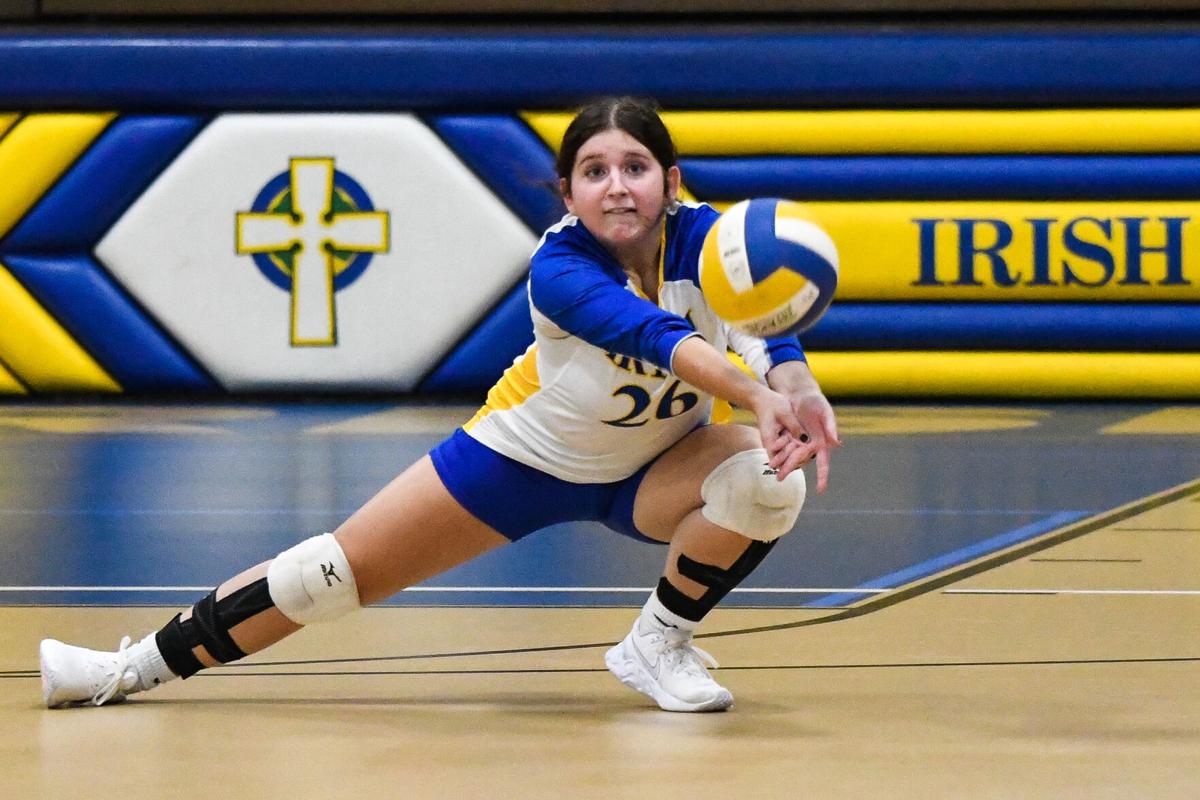 Prince of Peace’s Kiely Debo digs up a ball during the Irish’s win over Calamus-Wheatland at home on Tuesday night. 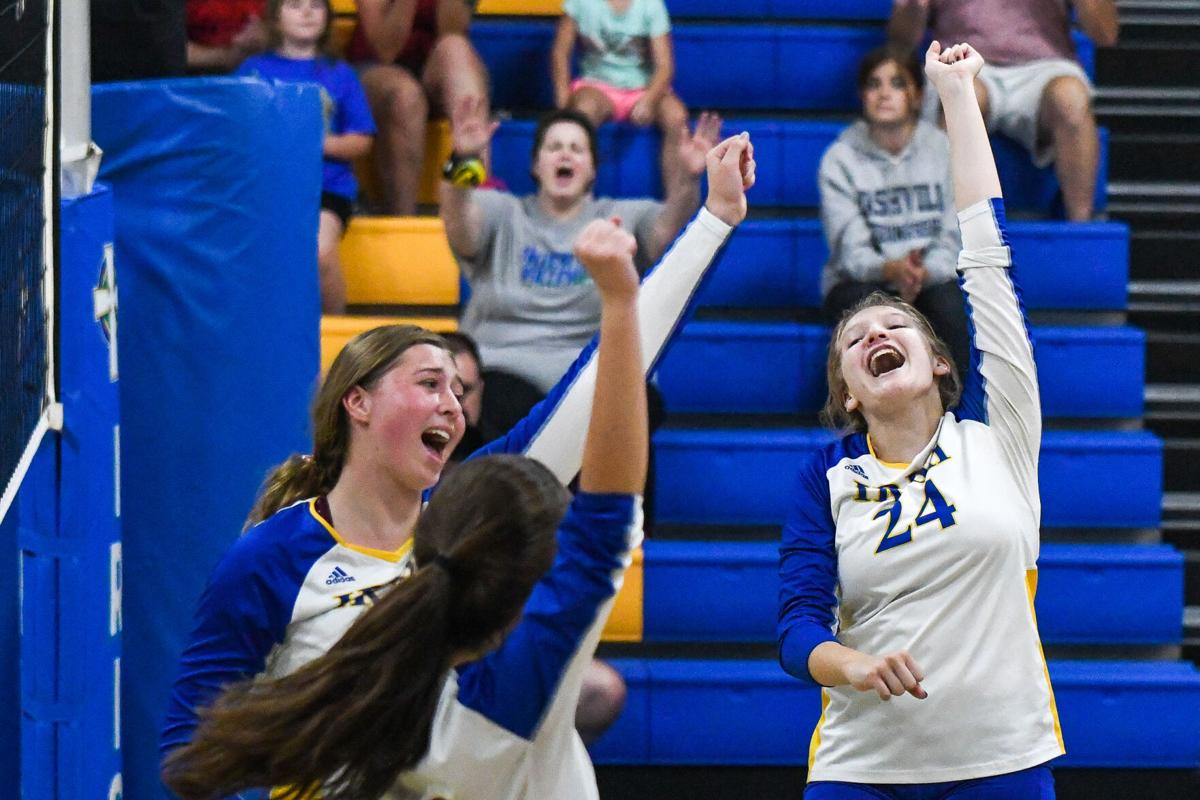 Prince of Peace’s Shannon Kenneavy and Lilly Isenhour celebrate a point during the Irish’s third straight conference win over Cal-Wheat.

Prince of Peace’s Madison Zachert and Sarah Moeller go up for a block attempt during the Irish’s 3-0 win over Calamus-Wheatland Tuesday night at the Joe O’Donnell Sports Center.

Prince of Peace’s Kiely Debo digs up a ball during the Irish’s win over Calamus-Wheatland at home on Tuesday night.

Prince of Peace’s Shannon Kenneavy and Lilly Isenhour celebrate a point during the Irish’s third straight conference win over Cal-Wheat.

CLINTON – With one final ace, the Prince of Peace volleyball sealed off a Tri-Rivers Conference sweep of Calamus-Wheatland at home on Tuesday night.

Although they grabbed the 3-0 victory, it was nothing short of a hard-fought win for the Irish.

Prince of Peace beat Cal-Wheat 25-22, 25-21, 25-20. It was their third straight TRC win, and one that they wanted. Earlier this fall, the Irish were actually swept by the Warriors in two sets at the Prince of Peace Invitational.

“We knew coming in we had to play well and we did today,” senior Lilly Isenhour said. “We had some times when we were kind of down but it never really felt that way, and that was a big part of it. It was definitely a big win for us.”

That final ace to seal the game came off of the serves of Shannon Kenneavy, who led the team with six aces Tuesday night. Kenneavy served five straight to end the third set.

“I feel like we’re controlling the game more when we’re able to do that,” Kenneavy said. “It pumps us up more than if we were to miss. When we get our serves in it helps our momentum.”

Before that, the third set was a slow starter for Prince of Peace. Error after error, both on the serve and the attack, had them trailing by as many as five throughout the beginning.

“I really think we just needed to pick each other up,” Kenneavy said. “Everyone makes mistakes and nobody is perfect so it helps when you have good teammates to help pick you up.”

In fact, the Irish didn’t tie the game up until the score sat at 17-17, and then had to string together a few points to tie the game back at 20.

The first two sets featured lead exchanges by the two Class 1A schools as well. Prince of Peace jumped out to a significant lead in the middle of the first set and held off a Warrior come back.

Head coach Stacie Kenneavy called a Prince of Peace timeout while they still held a 1 point lead. Out of the timeout, Sarah Moeller received a quick set from setter Shannon Kenneavy and put it away.

“I think that when people see they can do that, it helps everyone,” Kenneavy said of the offensive play. “It’s exciting and really picks everyone up, especially if we’re feeling down. It makes people say, okay, I guess we can do this.”

Lilly Isenhour notched a kill and Kenneavy served in ace to help put up the final points in set one.

Kenneavy started Set 2 off with five straight serves once more, including three aces.

Although they jumped out to the early lead, the Irish were playing from behind a few moments in. A couple of well placed roll shots from Nyah Thomas and Lilly Isenhour cut the Cal-Wheat lead to two.

A big block at the net helped, not to mention multiple touches that helped the Irish pass up Cal-Wheat attacks.

“Blocking just slows the ball down and helps our passers,” Isenhour said. “If we’re not getting touches, I play back row so I know how hard it is to be passing when there’s no block. We have to keep that up and we did good today. We have to make sure we’re getting out and getting out block set. We have to get there and keep watching the ball.”

Another kill from Moeller tied everything up 18-18. Moeller ended up leading the team with nine kills, while Isenhour put up six.

The Irish put a few more balls away and couple with a few Warrior errors they won the second set as well.

Prince of Peace finished with 53 digs on the night. Braxton Morhardt and Lilly Isenhour had nine each, Kiely Debo and Shannon Kenneavy each had eight, and Avery Dehner had seven.

“We definitely did better in the back row,” Isenhour said. “We’ve been working on that a lot, just reading where the ball is going and talking to each other.”

The Irish have won three straight conference games, making their only Tri-Rivers Conference East loss so far to No. 4 ranked Lisbon. They head on the road Thursday to take on Easton Valley. The River Hawks have also not lost a game on the East side of the Tri-Rivers.

“I’m excited,” Isenhour said. “We have to show up, we have to play and not play timid. We have to be a team.”