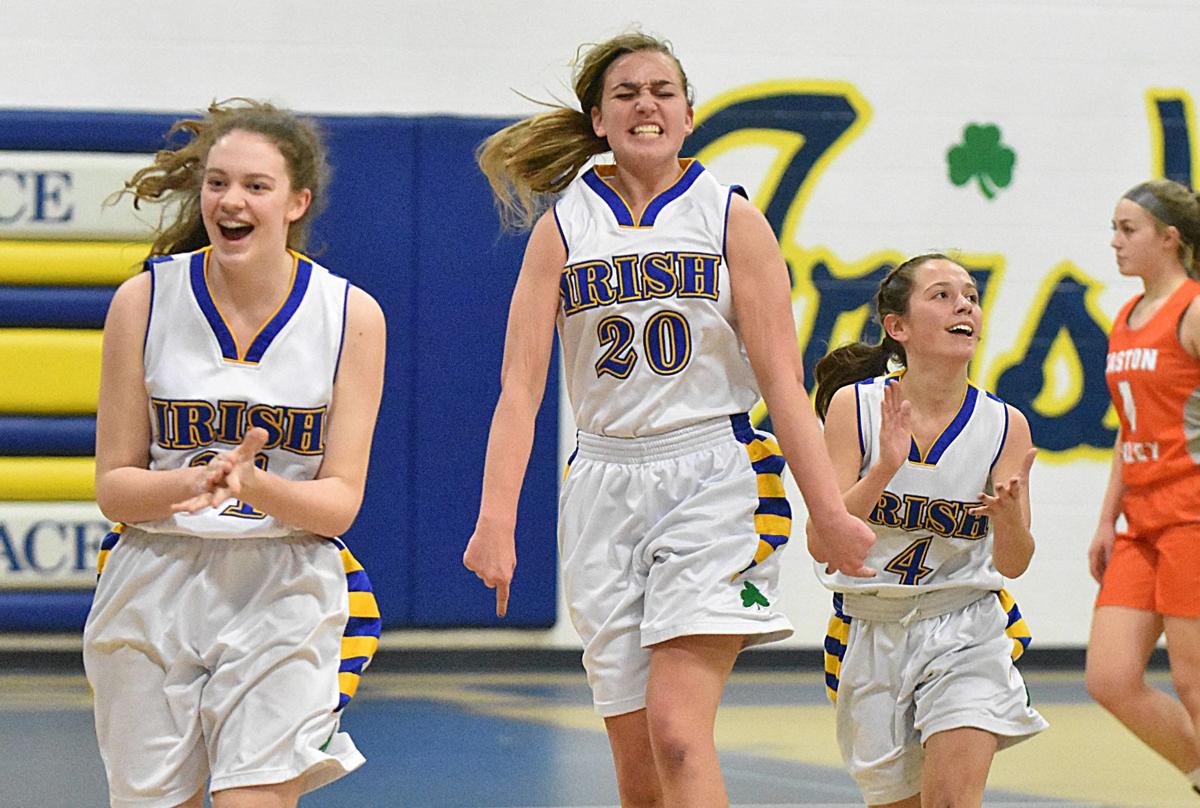 Prince of Peace’s Sarah Moeller, Anabel Blount (20) and Kaelyn Goodsman (4) come off of the floor at the end of the first quarter after a three from Isabel Hansen gave the Irish a 19-3 lead in their regional game. The Irish beat Easton Valley 46-26 to move on in the regional bracket, knocking the River Hawks out. 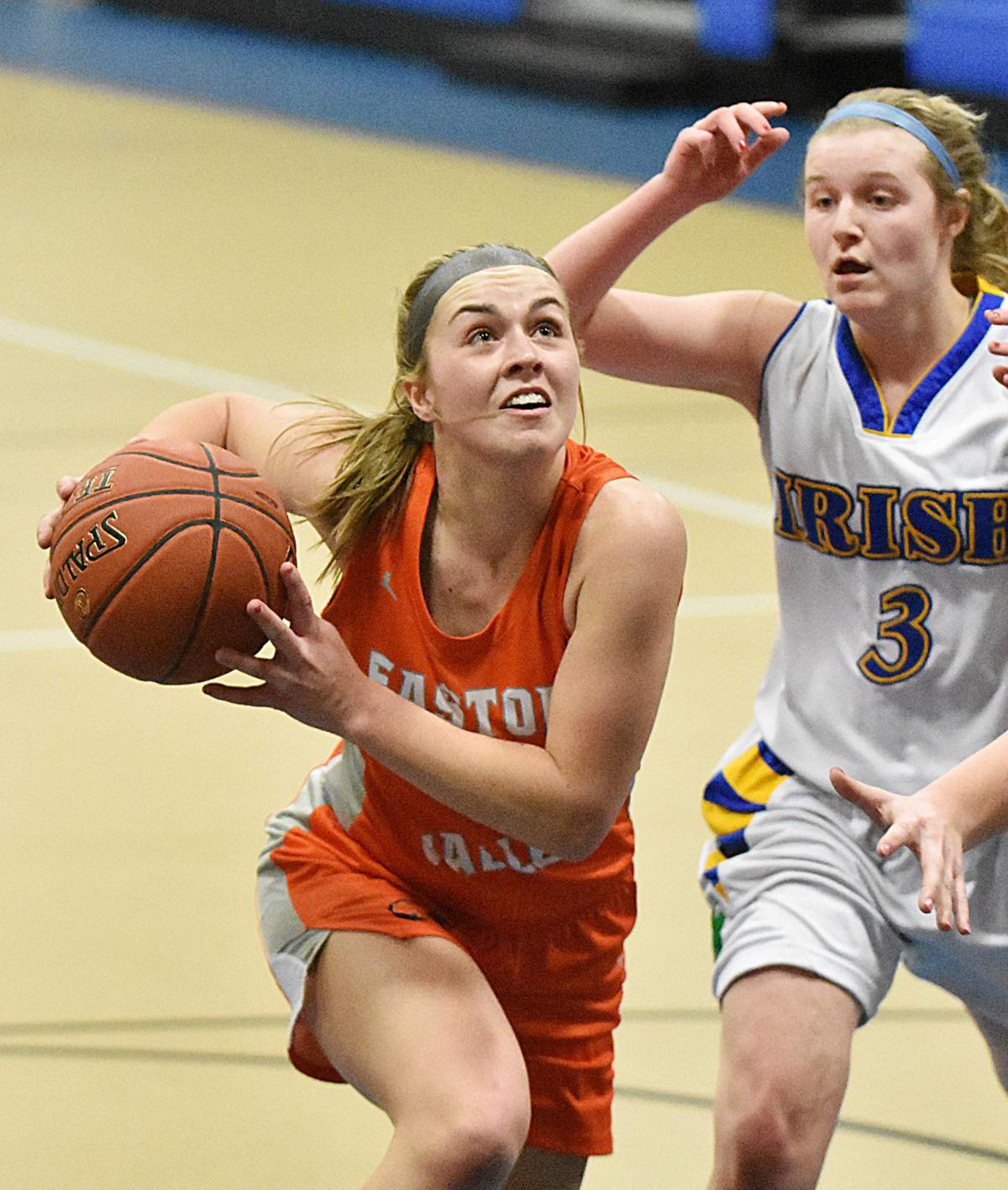 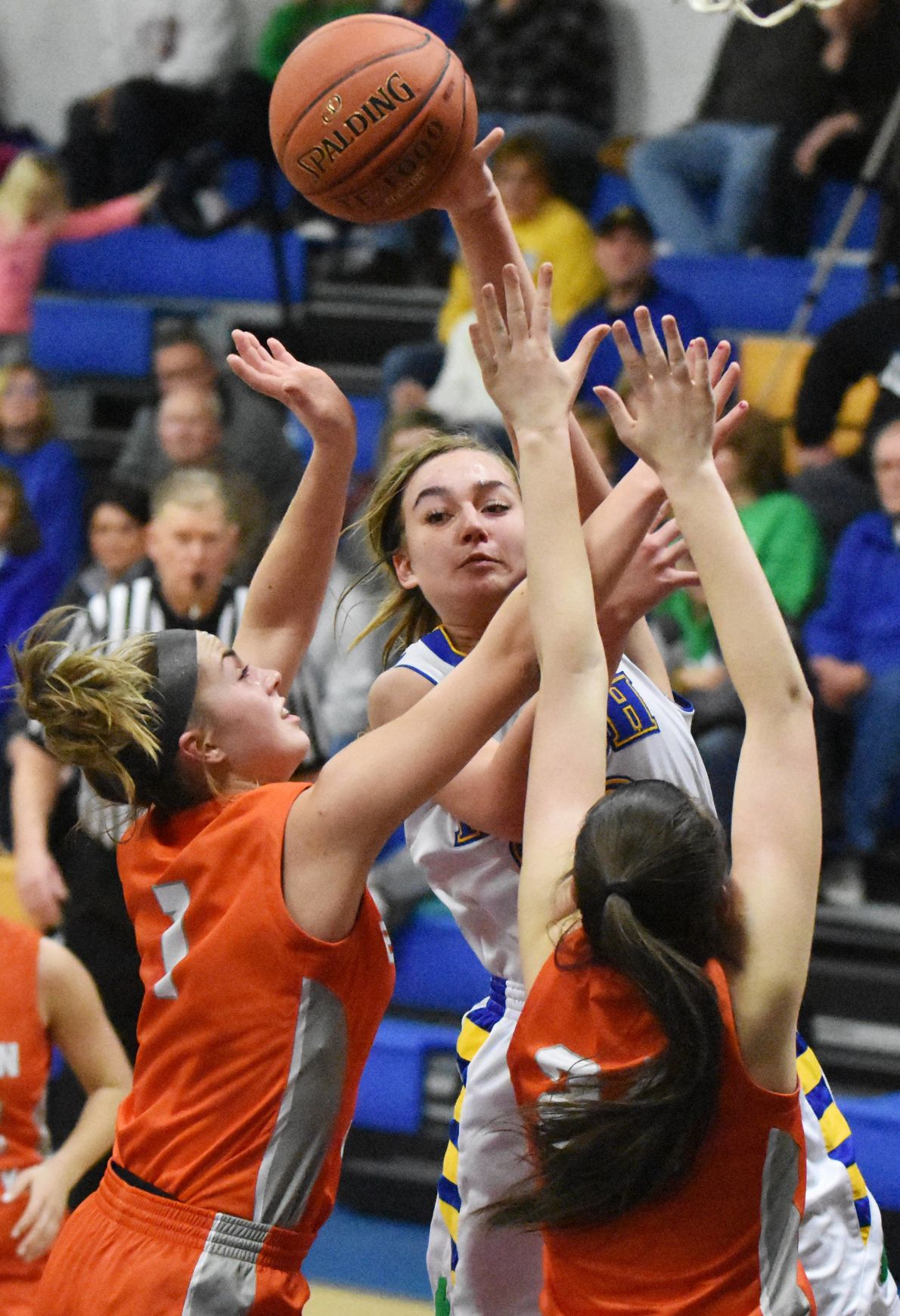 Prince of Peace’s Anabel Blount gets a pass over an Easton Valley double team to a wide open Lilly Isenhour in the second half of the Irish’s Thursday night regional win. 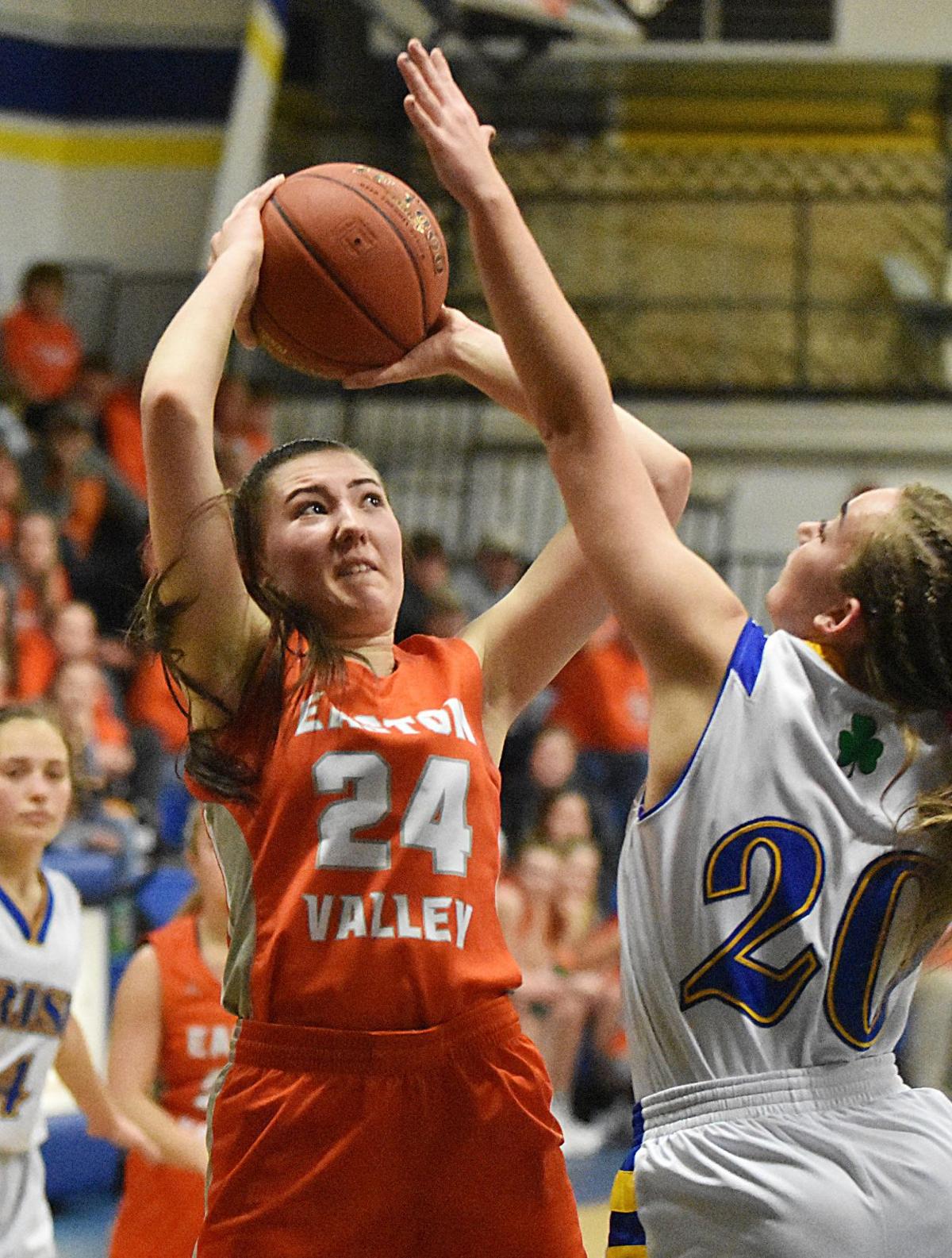 Prince of Peace’s Sarah Moeller, Anabel Blount (20) and Kaelyn Goodsman (4) come off of the floor at the end of the first quarter after a three from Isabel Hansen gave the Irish a 19-3 lead in their regional game. The Irish beat Easton Valley 46-26 to move on in the regional bracket, knocking the River Hawks out.

Prince of Peace’s Anabel Blount gets a pass over an Easton Valley double team to a wide open Lilly Isenhour in the second half of the Irish’s Thursday night regional win.

CLINTON – The Easton Valley girls’ got off to a slow start on Thursday night, and the Prince of Peace squad capitalized.

The sluggish first quarter for the River Hawks helped catapult the Irish to a 46-26 regional victory in Clinton, moving Prince of Peace on to Round 2 and ending Easton Valley’s season.

“We talked about it before the game – if you don’t have some nervous energy then you don’t care,” Prince of Peace head coach David Nelson said. “The girls came out and really did care.”

The Irish shook off post-season jitters and came out ready, jumping out to a 9-0 lead before the River Hawks could find the hoop. Sydney McNeil drained a three almost five minutes into the game to stopthe bleeding momentarily but less than a minute later Isabel Hansen drained her own three to give the Irish the first double-digit lead of the night.

McNeil ended with 11 points for the River Hawks to lead the scoring.

And a margin that wouldn’t change. Isabel Hansen drained another three pointer to end the quarter, giving the Irish the 19-3 advantage after just eight minutes. Hansen ended with a season and team-high 16 points on the night.

“It felt like anything that could have gone wrong for us today, went wrong,” Easton Valley head coach Chad Gruver said. “We couldn’t rebound, we couldn’t make free throws, we couldn’t hit shots.”

“We hit some outside shots that were important,” Nelson said. “We talked about having an in-and-out game. Isabel [Hansen] had a career game and that was really good to see.”

The bleeding didn’t stop in the second quarter. Liviah Johnson and McNeil both found paths up the middle of the lane for buckets, and Sydney Stoll made it to the foul line once, but the Irish had a comfortable 26-8 lead at halftime.

“Easton Valley is a really good team,” Nelson said. “We knew that even though we got out to a a nice start, they were going to charge back.”

Nelson was right, it wasn’t over yet. The River Hawks came out battling and a bucket by Johnson in the middle of the third quarter cut the lead to just 11.

“We told them to go out and play hard,” Gruver said. “We tried to get them to attack more – we probably passed a little too much. We knew coming out of halftime we had to turn it up and I thought we did a nice job of doing what we could tonight. Just too little too late.”

The Irish called a timeout to collect themselves and came out with the answer.

Paige Kuehl dribbled the ball coast-to-coast down the left side, and on the next possession Anabel Blount flipped the assist across traffic to a wide open Lilly Isenhour. The River Hawks found themselves fouling in hopes of getting the ball back, and the Irish rolled from there.

Prince of Peace went 9-for-14 in the fourth quarter from the free throw line.

“The big thing at that juncture was that we have to rebound the basketball and we have to play good defense,” Nelson said. “If we do that we can win this game. They had multiple possessions where they pulled down three and four attempts and that’s unacceptable for us. We did what we needed to do.”

“They all work really hard,” Gruver said. “They’re a special group with a lot of talent. It started clicking here in the second half of the season and they were getting comfortable.”

The Irish move on in the Class 1A Region 4 bracket, meeting Tri-Rivers Conference opponent Marquette Catholic. The Mohawks have lost just once this year and boast the No. 2 ranking in Class 1A.

The Irish have lost in both meetings this year, the last time by ten points.

That regional quarterfinal will be Tuesday in Bellevue.