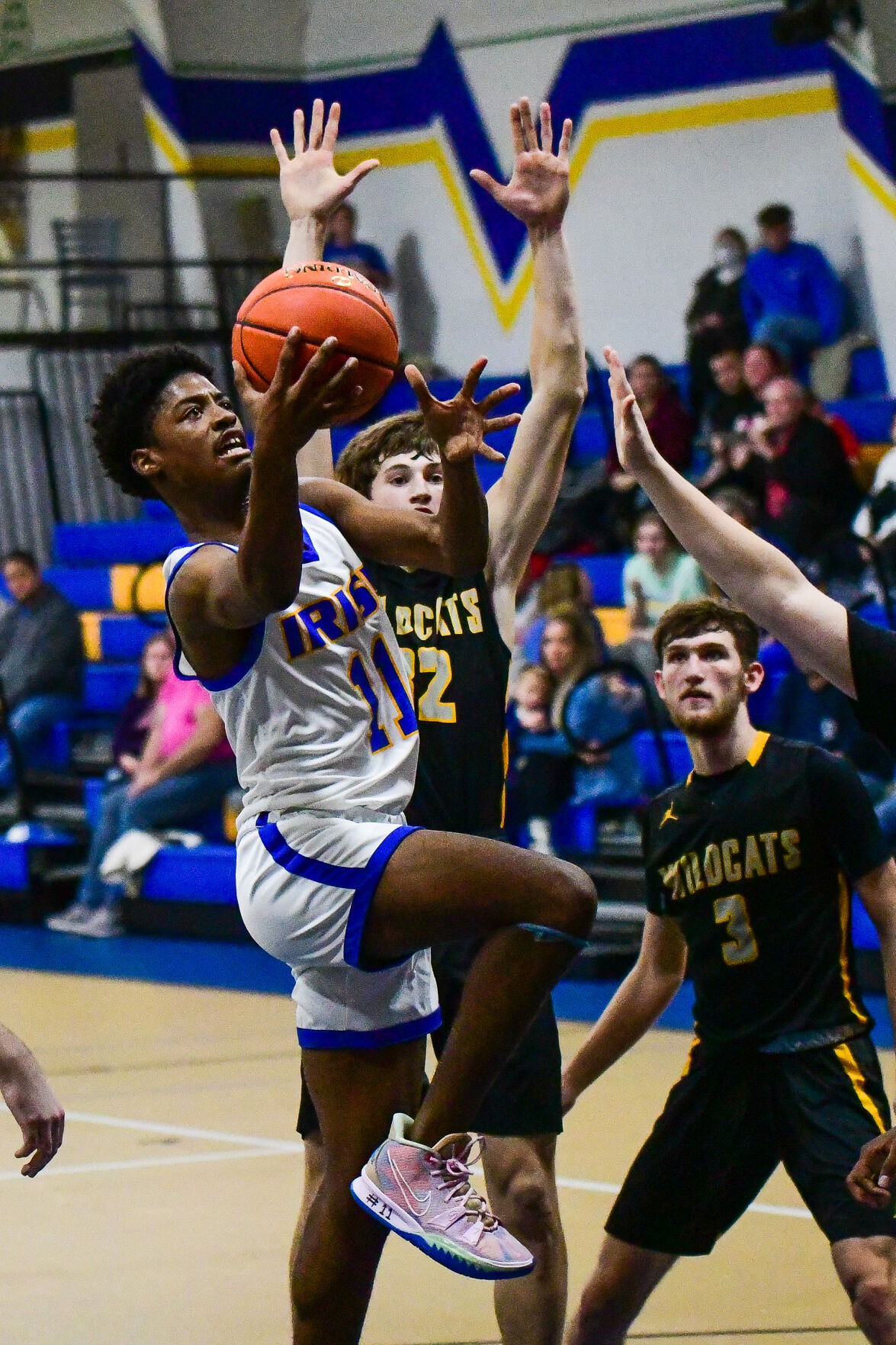 Prince of Peace sophomore Jhikeith McGraw drives and takes a shot during the Irish’s 52-37 loss to Maquoketa Valley Friday night. 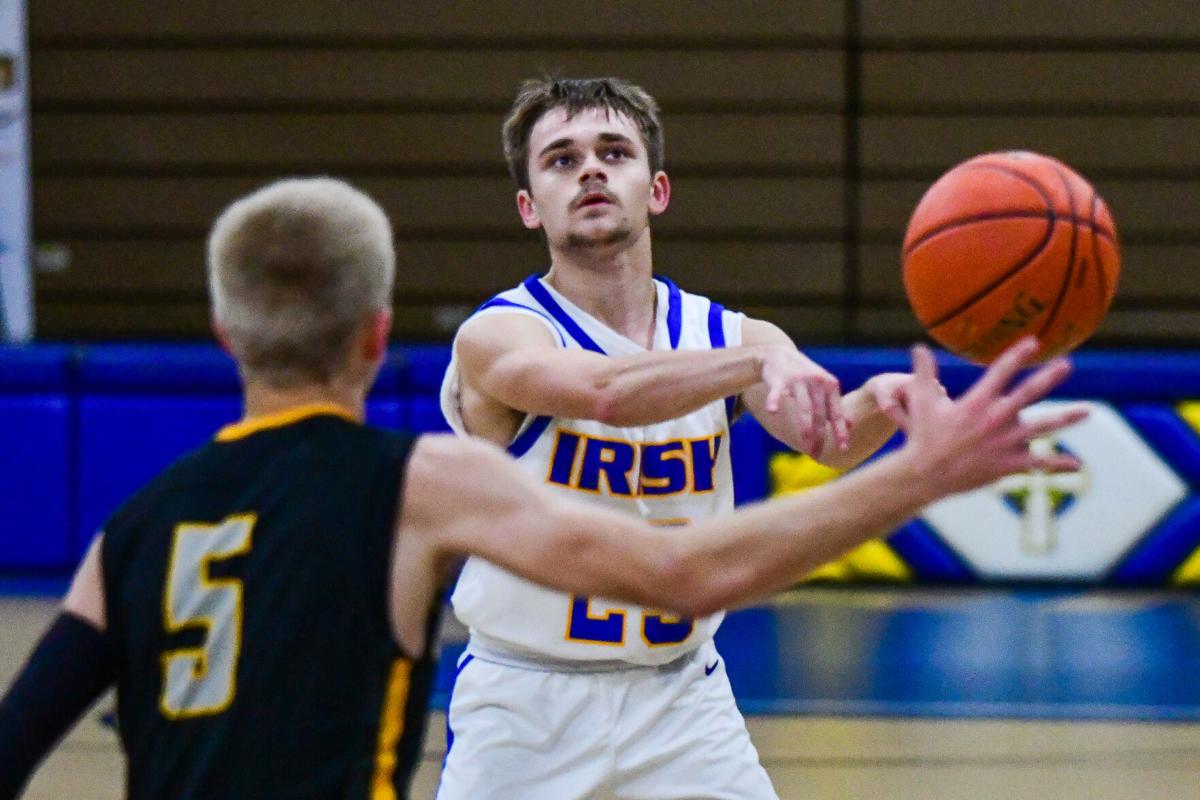 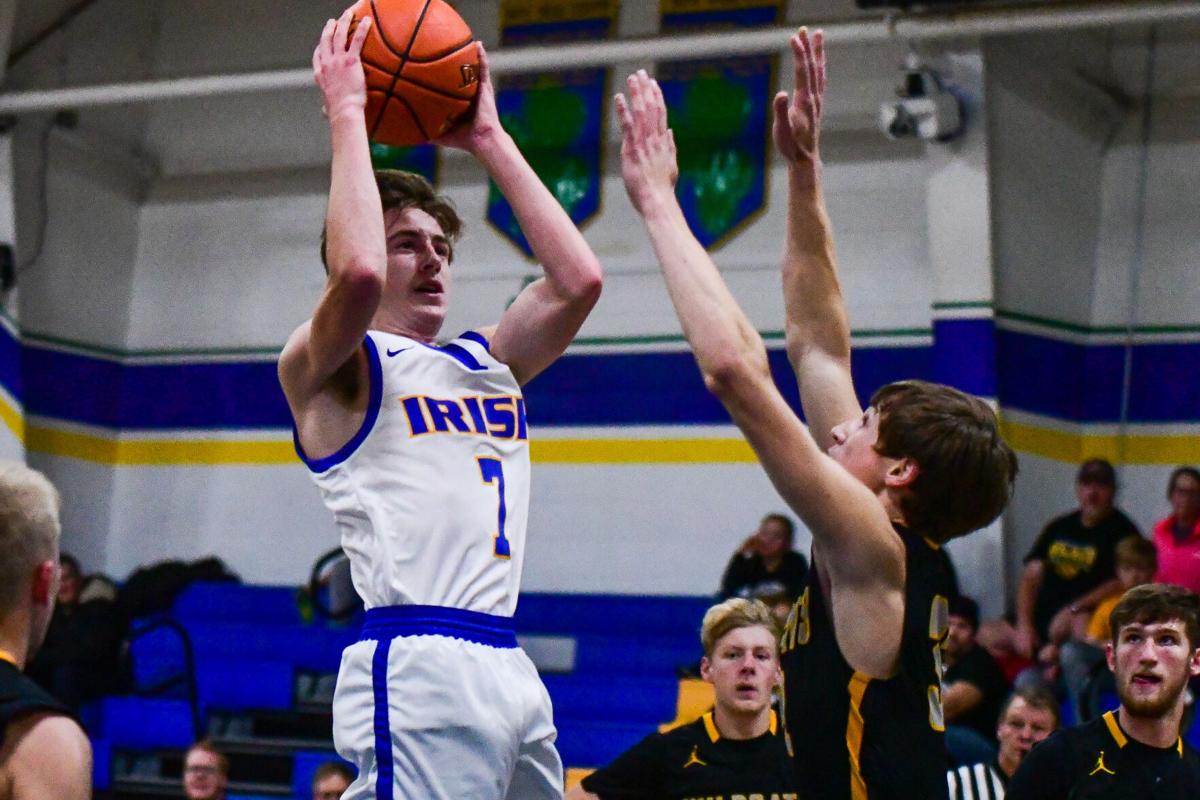 Prince of Peace senior Marcus Blount looks for a shot over defense during the Irish’s loss to Maquoketa Valley Friday night. 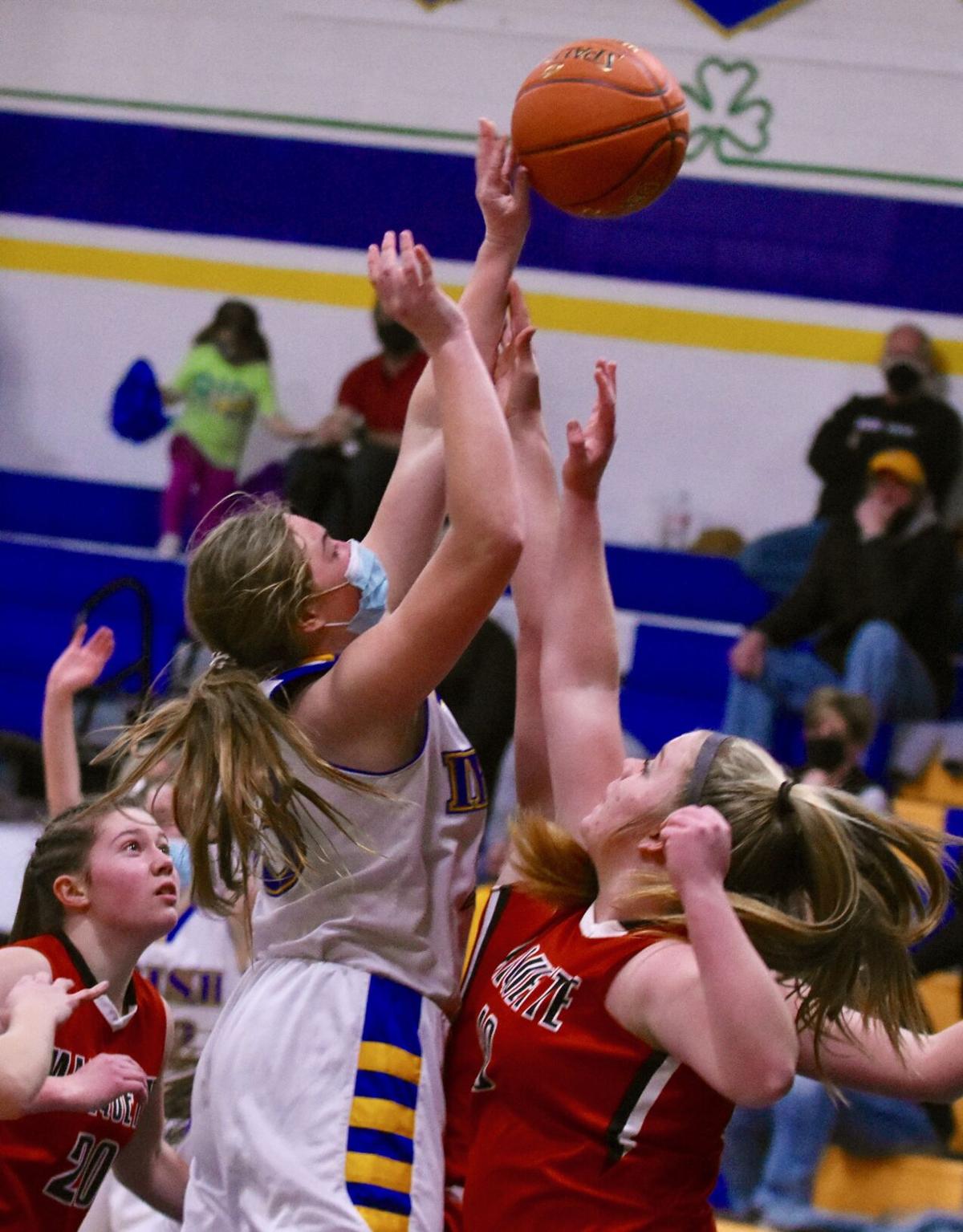 In this Herald file photo, Prince of Peace’s Lilly Isenhour fights for a ball during a 2021 Irish home game.

Prince of Peace sophomore Jhikeith McGraw drives and takes a shot during the Irish’s 52-37 loss to Maquoketa Valley Friday night.

Prince of Peace senior Marcus Blount looks for a shot over defense during the Irish’s loss to Maquoketa Valley Friday night.

In this Herald file photo, Prince of Peace’s Lilly Isenhour fights for a ball during a 2021 Irish home game.

CLINTON – Maquoketa Valley proved too much to handle for the Prince of Peace boys on Friday night, and they fell in their home opener 52-37 at the Joe O’Donnell Sports Center.

That was despite a comeback effort by the Irish.

“We played half of a game,” Prince of Peace head coach Gerry Murphy said. “When you only play 16 minutes you’re going to get beat. The other team took it to us, we had no energy and they did.”

Prince of Peace trailed 29-8 at the half, but came out with renewed energy. Hakeal Powell kicked off the scoring with a midrange basket over defense, then Marcus Blount stepped back to nail a three-pointer.

Just a few plays later, Jaxon Dehner hit his own three to cut the lead to 14.

The renewed energy also showed on the defensive end. Maquoketa Valley’s point guard, Avery Holtz, gave the Irish fits all night. They picked up the aggression at the top of the key on Holtz, and the Wildcat scoring slowed.

At the end of the quarter, Marcus Blount came own with a rebound and broke out fast, tossing it down the court to Powell, who put in the bucket. The score was cut to 37-25 with eight minutes left.

The aggressive defense took a toll on the Irish’s point guard Marcus Blount. Blount notched his fourth foul with a reach on Holtz just a minute and a half into the final quarter.

On the next play, he was called for an offensive charge and his night ended.

With Blount out, the Irish struggled to set up an offense. The roster is full of underclassmen, including sophomores Eric Berry, Jaxon Dehner and Jhikeith McGraw and freshman Hakeal Powell who were all on the floor when Blount exited the game.

“Somebody has to step it up, and they have to do it as a team not as individuals,” Murphy said. “We fell in love with shooting the three-point shot, and obviously that wasn’t working out.”

The Irish couldn’t gain anymore ground on the Wildcats.

“Inexperience, youth, getting caught up in the moment and not doing what they should be doing,” Murphy said. “Jacking stuff up instead of running plays.”

Offensive rebounding was a sore spot for Prince of Peace the entire night. Their roster is on the smaller end, but the Wildcats put up a large percentage of their points off second-chance shots.

“We thought it was 30 points, and they ended up with just over 50,” Murphy said. “That and then dribble penetration. Between the offensive rebounding and that, too many easy baskets. They controlled the tempo.

“We’d fight back and then they’d get an easy basket or an offensive rebound. It’s like beating your head against the wall.”

After jumping out to a 5-1 lead in the first quarter, the Irish didn’t score for nearly eight minutes while the Wildcats ran up a lead.

“We didn’t run any offense,” Murphy said. “We didn’t do any of the things we should have done and we scored eight points.”

Meanwhile, the zone that the Irish started the game with was not working. The Wildcats were finding plenty of outside shots, draining five threes in the first half.

“There were terrible breakdowns,” Murphy said. “We didn’t have five people out there playing together tonight.”

Prince of Peace (1-1) will head to North Linn next Tuesday. Murphy knows that to get to the next level of playing, his young roster needs to find a rhythm together as a team.

“Play hard every practice, every drill,” Murphy said. “Play like it’s a game winner. Until we get that mentality, we’re going to be an average team.”

CLINTON – Before the boys’ loss, the Prince of Peace girls team picked up their first win of the season with a 41-33 win over Maquoketa Valley in front of their first home crowd.

“It feels great honestly,” junior Sarah Moeller said. “We started off kind of slow in the beginning but we really got our defense together and cleaned up our offense and turnovers and it turned out really well.”

It was an overall defensive effort for the Irish, who dropped their first two games of the year to Calamus-Wheatland and Central City.

For a group that is still getting used to playing together, defense has been a key while their offense finds a rhythm. They found it in a zone on Friday night.

“We’ve been going over defenses and we hadn’t really found anything that was working,” senior Lilly Isenhour said. “Yesterday in practice we did this defense and we said that looked really good.

“We communicated well and it wasn’t something we thought would be our best option but it ended up really good for us.”

Moeller led the scoring in the paint with 20 points, 12 of those coming off of free throws. The Irish have a fairly tall roster with Moeller coming in at the tallest, and post-play is something they’re relying on as a team .

“There was a lot of openings outside of the defense, but it was definitely the guards getting it to us with a lot of great passes,” Moeller said.

The girls (1-2) will also head to North Linn next week.

Arnold E. Outzen, 94 of Clinton passed away Monday, January 24, 2022 at the Alverno. Snell-Zornig Funeral Homes are assisting the family with arrangements. Full obituary will be in Saturday's paper.