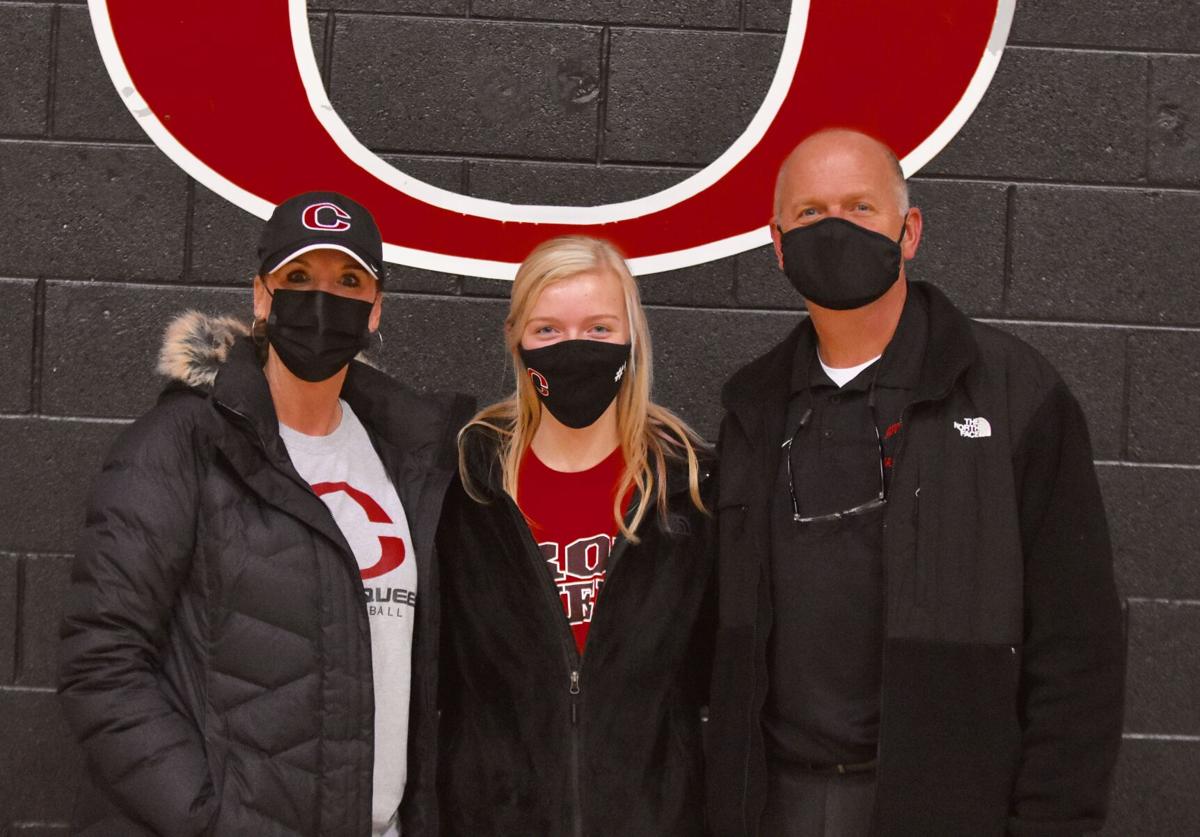 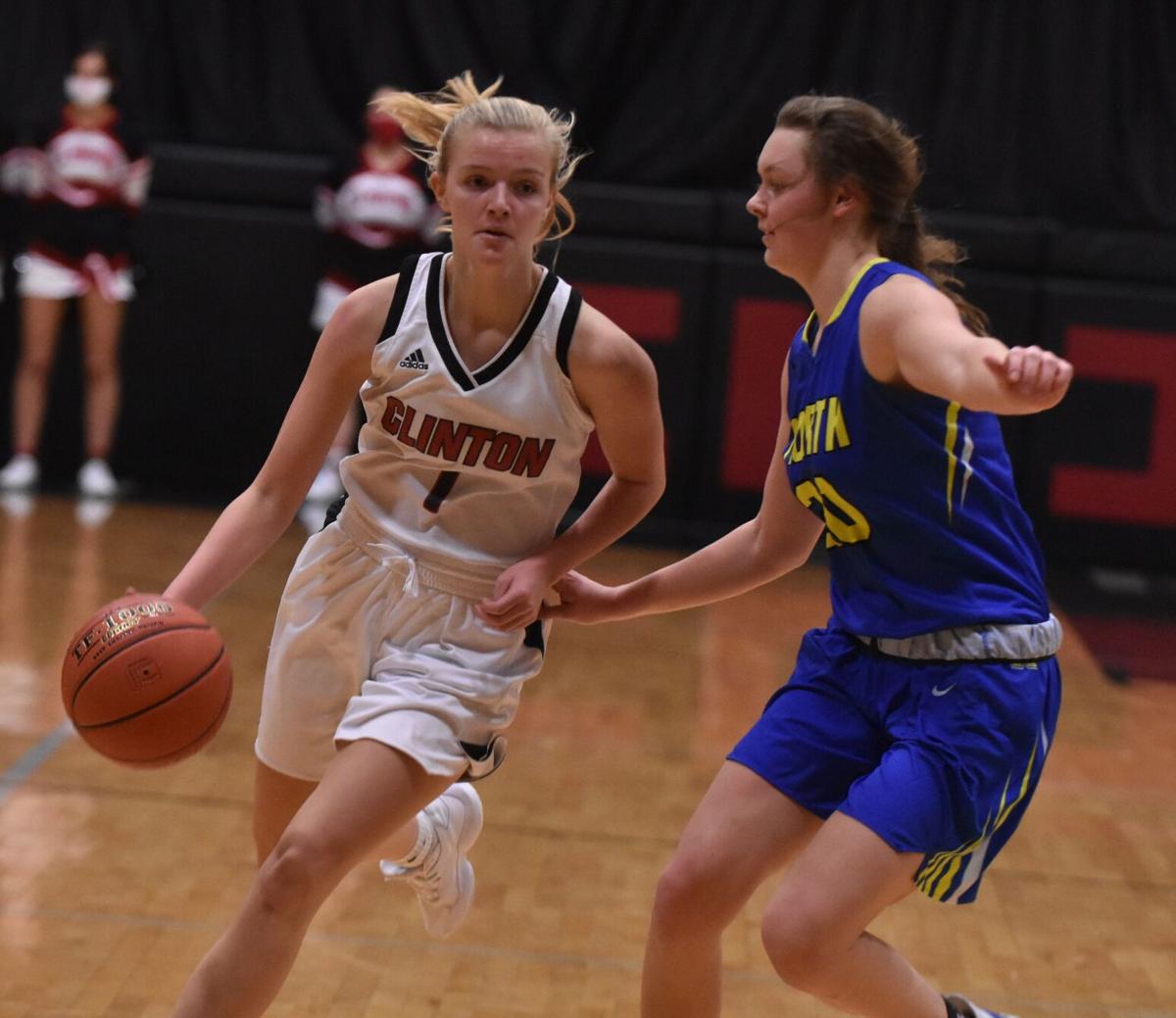 Clinton senior Elle Davis (left) drives past a defender during the River Queens’ loss to Davenport North Dec. 22 in Clinton. It was Davis’ last game in a Clinton jersey before developing symptoms for MIS-C.

Clinton senior Elle Davis (left) drives past a defender during the River Queens’ loss to Davenport North Dec. 22 in Clinton. It was Davis’ last game in a Clinton jersey before developing symptoms for MIS-C.

CLINTON — Clinton senior Elle Davis doesn’t plan on going to college for anatomy or any other medical field anytime soon.

She’s had more experience with it — not by choice — than most high school seniors.

Davis, a leader for the Clinton girls basketball team, was diagnosed with COVID-19 in October. She recovered, but her last game with the River Queens came Dec. 22 in a loss to Davenport North.

Davis got sick on Christmas day and the following Sunday, was taken to urgent care. The doctors there told her she needed to get to the hospital at the University of Iowa in Iowa City. She was going to be airlifted, but had to be taken by ambulance due to inclement weather.

“It was pretty scary watching your kid and your wife leave in an ambulance,” Clinton girls basketball assistant and Elle’s father John Davis said.

Elle Davis spent her first night in the Intensive Care Unit of the University hospital because her heart, lungs and kidneys were shutting down. She spent six more nights in the children’s hospital.

Davis was diagnosed with Multisystem Inflammatory Syndrome in Children (MIS-C), a condition linked to COVID-19. The condition causes organs and tissues to become inflamed. Not much is known about it and doctors are still uncovering information on what it can do to those who get it. It is rare to develop symptoms after having coronavirus and even rarer in adults, but those who get it develop these symptoms four-to-six weeks after COVID: fever, vomiting, diarrhea, stomach pain, rash, tiredness, fast heartbeat, rapid breathing, red eyes, redness/swelling of the lips and tongue/hands/feet, headache or dizziness and enlarged lymph nodes.

Emergency warning signs for the condition include severe stomach pain, difficulty breathing, bluish lips/face, confusion and inability to wake up or stay awake.

While most eventually recover, it can be life threatening — as Davis found out.

“The doctor said her organs got inflamed, they’re still ready to fight COVID even though it’s gone,” Elle’s mother Anne Davis said. “Her organs turned on themselves and started shutting down. It’s so bizarre.”

Davis’ parents had to give her shots in her stomach until Jan. 19. She can participate in any physical activity for at least six months and will have checkups with a cardiologist, and she will have a stress test in a few months. In addition, Davis has myocarditis, another condition associated with COVID-19. The only symptoms she deals with now are occasional shortness of breath and peeling hands and feet.

Now, Davis joins her father on the bench for basketball games, helping out the team in other ways. Right when she found out she couldn’t play basketball anymore, she knew she still wanted to be a part of the team.

“I knew right when they told me that I would still want to be part of the team and cheer them on,” she said. “(The team) has been supporting me throughout the whole thing.”

Still, the adjustment hasn’t been easy.

“It’s been really different and makes me really sad,” Davis said. “It was really surprising. At first, I didn’t really know how to take it because I wasn’t expecting it at all.”

The illness put things in perspective for the Davis family.

“You come together and realize what’s important,” Davis said. “We’re all disappointed she can’t play basketball, but her health — she’s got a good head on her shoulders and going to go out to the University of Iowa next year for school, but her health is most important. It’s tough as a coach, her senior year. She’s a big leader on the floor for us, so it’s harder for the team.”

Elle’s father has been a big influence on her as an athlete and a person.

“He’s been my coach since as long as I can remember,” Elle Davis said. “Sometimes I want to punch him in the face, but he just wants what’s best for me and I’ve enjoyed having him as a coach.”

“It’s always fun to coach your kids,” Davis said. “From a coaching perspective, you’re probably hardest on your kids and I’ve been pretty hard on her at times, but she’s a good basketball player and a nice young lady. She’s put up with me and there’s days I’m sure she didn’t want me there and walked away from me because she was tired of hearing me talk to her, yell at her, but it’s been rewarding — I’m going to miss her.”

Even though Elle doesn’t don a River Queens jersey anymore, she’s getting to see what it’s like being in her father’s spot on the bench.

“She’s getting to see what we see sometimes when we’re yelling at players when they’re standing or not moving, not running the plays,” John Davis said. “She’s catching a little bit more of that coaching side, where you maybe don’t see that aspect when you’re playing.

“I can hear her yelling every now and then some things that they need to be doing, so she’s getting a different perspective of it, too.”

The coaching gene seems to be rubbing off on her.

Davis plans to pursue a degree in elementary education at the University of Iowa after high school.

Though her most recent memories at Iowa aren’t the most pleasant, the Davis family credits the hospital there with Elle’s recovery.

“We can’t say enough about the University of Iowa,” John Davis said. “They were unbelievable.”

More than anything, they hope to get the word out about MIS-C in case any other families have to deal with it. To find out more about the syndrome, visit https://www.mayoclinic.org/diseases-conditions/mis-c-in-kids-covid-19/symptoms-causes/syc-20502550.