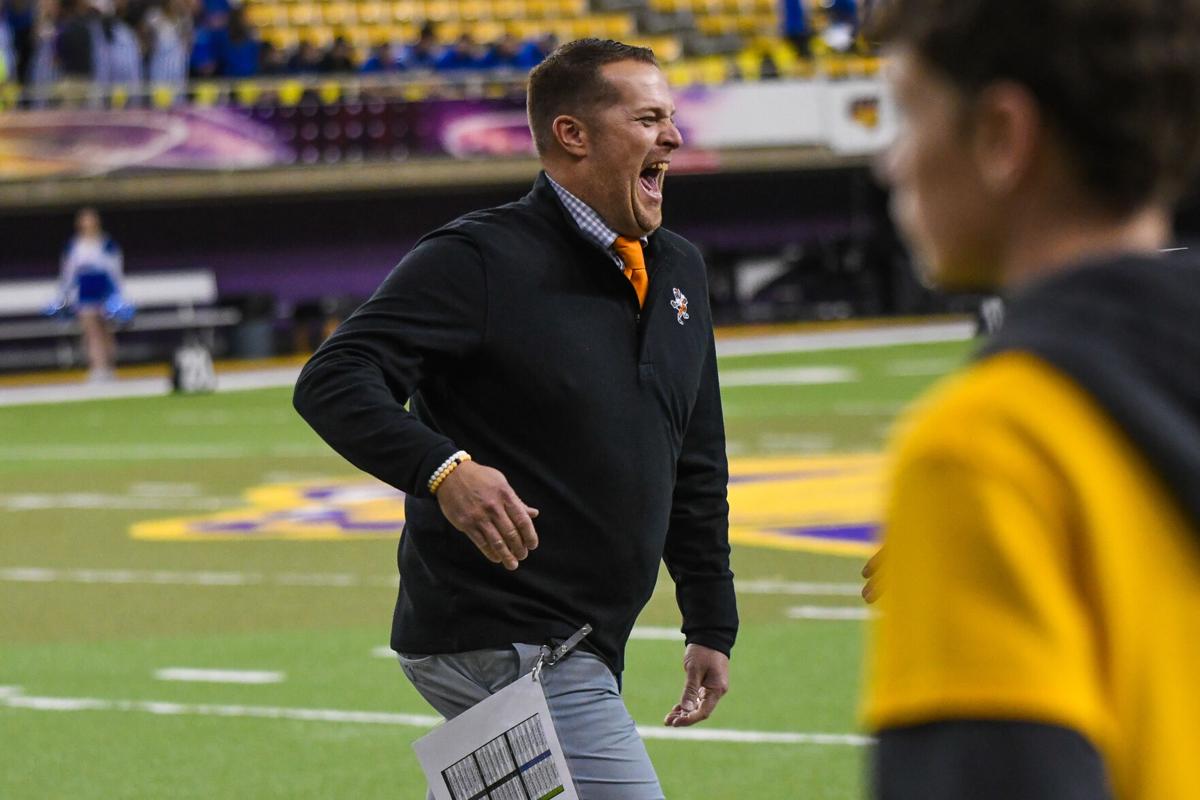 Tony Johnson comes off the field smiling after the River Hawks took down Remsen St. Mary’s in the 8-man state semifinals last week. Johnson and his team are playing for the title Thursday morning in Cedar Falls. 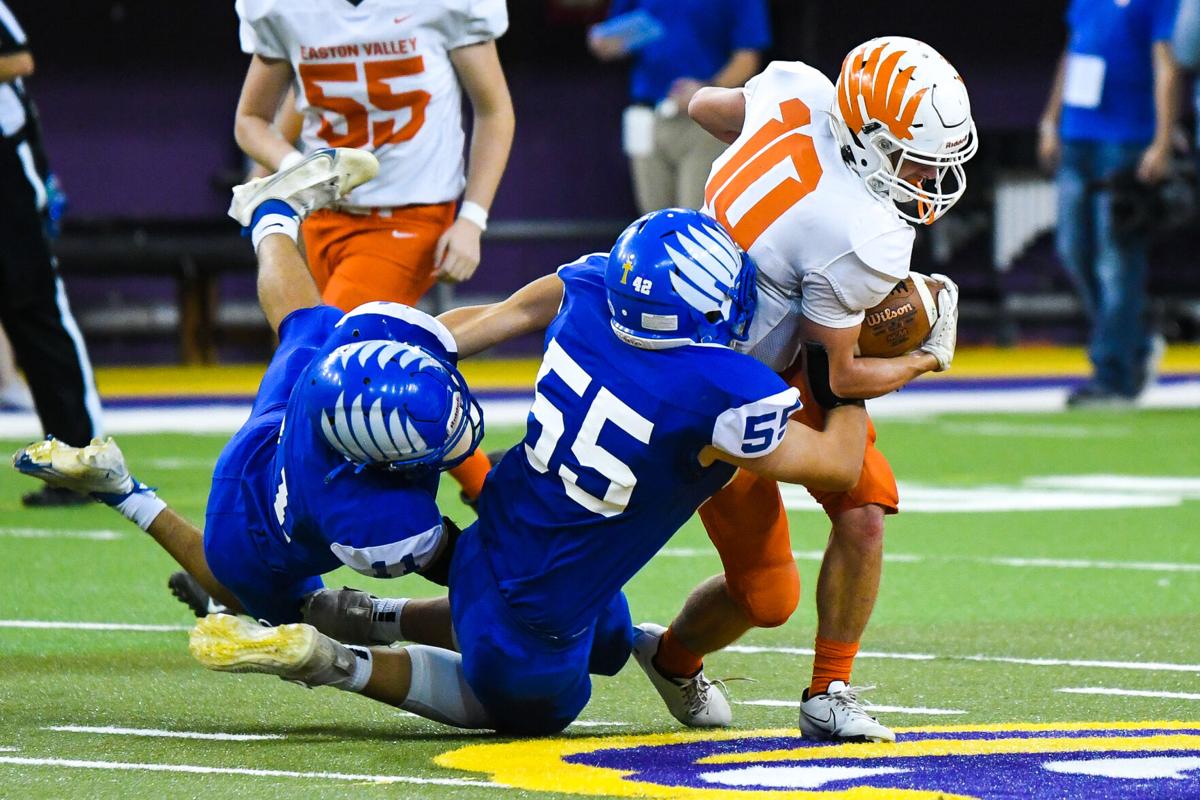 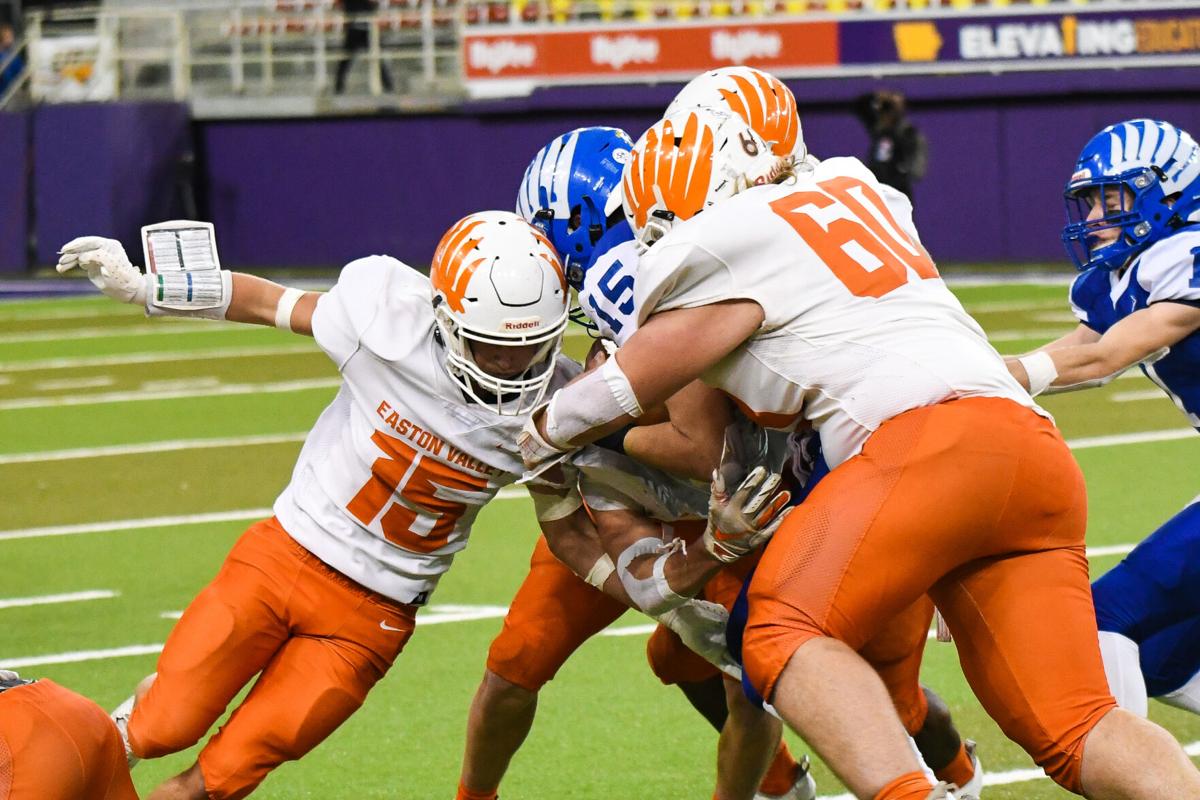 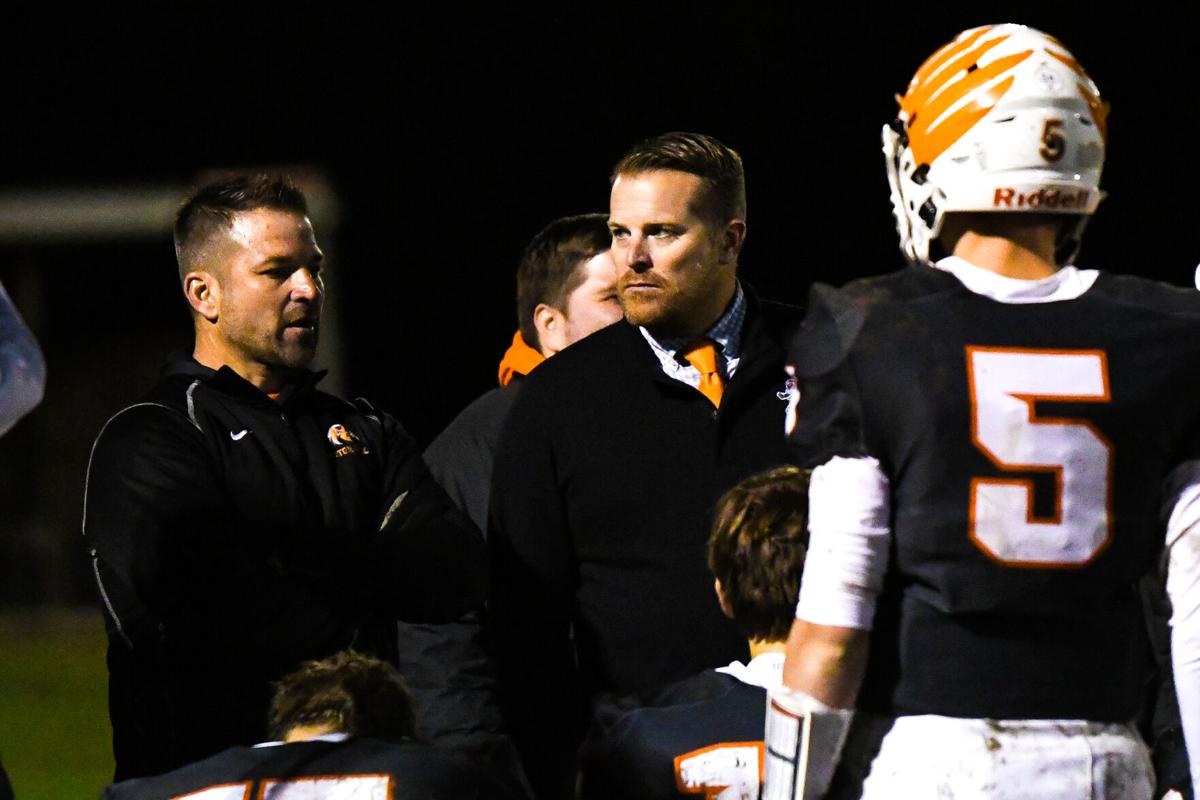 Tony Johnson comes off the field smiling after the River Hawks took down Remsen St. Mary’s in the 8-man state semifinals last week. Johnson and his team are playing for the title Thursday morning in Cedar Falls.

Easton Valley head coach Tony Johnson is in his fourth year in charge of the River Hawks.

That means for the first time since taking over, all his athletes have been coached by him and only him. His first freshman class now makes up his senior leaders.

“This group of seniors, they’ve been through the program for four years now,” Johnson said. “They’re kind of the product of what the program is all about.”

If they’re what the program is all about, they’re definitely making a positive statement. With a roster full of athletes who are immersed in his program, Johnson and the River Hawks are now playing for the school’s first ever state title on Thursday morning.

“It’s a little surreal,” Johnson said after the team’s semifinal win over Remsen St. Mary’s last week. “I’m just so proud of the kids – talk about a dog fight. Back and forth, back and forth, and we just kept asking for more from them. They showed tremendous heart and were just not going to be denied. I’m super proud of the kids and what they’ve been able to accomplish this year.”

Easton Valley has not lost a game this season, their most recent win coming in the state semifinal game over Remsen St. Mary’s last Wednesday. Thursday morning, they’ll take on CAM in the final 8-man game of the 2021 season in Iowa.

Easton Valley became a school in 2013 and has no state champions as the River Hawks at this point.

Playing at the UNI-Dome for a championship is quite the place to be after four years of work with a program. The River Hawks are led this year by that group of seniors that Johnson welcomed in as freshmen four years ago. That includes senior quarterback Conor Gruver plus seniors Andin Farrell, Dillon Beck and Carson Lee just to name a few.

“They’re a great group of kids that are willing to work hard with no egos,” Johnson said. “They don’t care about those individual statistics, they just want to win. I think that’s what makes them great.”

Johnson has been lucky with roster after roster filled with talented athletes since taking over. Offensively, the team has been one of the most prolific in the state the last four years – first under quarterback Nate Trenkamp who ended as one of the top in 8-man history and now under Gruver.

“I was a head coach in 11-man,” Johnson said. “I had to take that train of thought and narrow it down to an 8-man game. WE got that going kind of early, we got that going year one and we’ve added things since then. Depending on what our team looks like any given year, that’s where we make adjustments.”

The last few years, defense is where the River Hawks have stepped up their game. As their records have improved and postseasons have gotten longer, the margins of victory have continued to rise. Sure, they can score point all night long. Their accomplishment comes when they don’t let the other team score.

“A lot of things have evolved,” Johnson said. “We got a better idea of what we wanted to get done defensively and I think that’s why the last two years our defense has been so great.”

Johnson and his coaching staff have a fairly simple philosophy as far as their team goes.

“Accountability was the main thing,” Johnson said. “Hard work. When I took over, there were some things that were lacking in that area. We really wanted to focus on that.”

“Character building is huge, that’s always been a part of the program,” Johnson added. “When you instill all of that, the wins will come.”

Being the principal at Easton Valley High School also had it’s benefits as far as coaching goes. Not only is he seeing his kids on the field after at practice, but the entire football team knows he’s their from the moment the bell rings in the morning as well.

“Being the principal, academics is a big key,” Johnson said. “We wrap that all into a tight little package and that’s what we use.”

The River Hawks have certainly proved they’re capable of being the best in the state. They take on CAM bright and early in Cedar Falls to try to cap off their 2021 season with a perfect record and a state title.

“They’re not afraid to work hard and it shows,” Johnson said. “We have kind of a workman’s like approach to everything we do.”

QUICK LOOK AT THE COUGARS

Easton Valley is playing CAM, who is also in the middle of their first trip to the UNI-Dome.

The Cougars are coming in with a 12-0 record as well. CAM and Easton Valley have no opponents that they have both faced this season. The Cougars beat Audubon in their semifinal game 66-29. Only four of their wins were by less than 50 points, their closest game being a 16-point victory over Audubon early in the regular season.

The River Hawks have the leg up when it comes to offensive damage through the air. Conor Gruver has 2871 passing yards this year, leading the state with 51 touchdowns throw. His favorite target is Hayden Felkey, who has 41 receptions for 974 yards. Aidan Gruver, Carson Fuegen and Andin Farrell all step up for big receptions game after game as well.

Felkey is the defensive leader for the orange and gray. He has 115 total tackles, including 42 for a loss and 17 sacks. The most comparable defensive numbers for the Cougars come from senior Joe Kauffman, who has 102 tackles, but only seven for a loss this year.

The Cougars have very spread out stats defensively, beating the River Hawks on fumble recoveries and interceptions this year. Meanwhile, the River Hawks have dominated in the backfield, knocking down 142 tackles for a loss and 33 sacks.