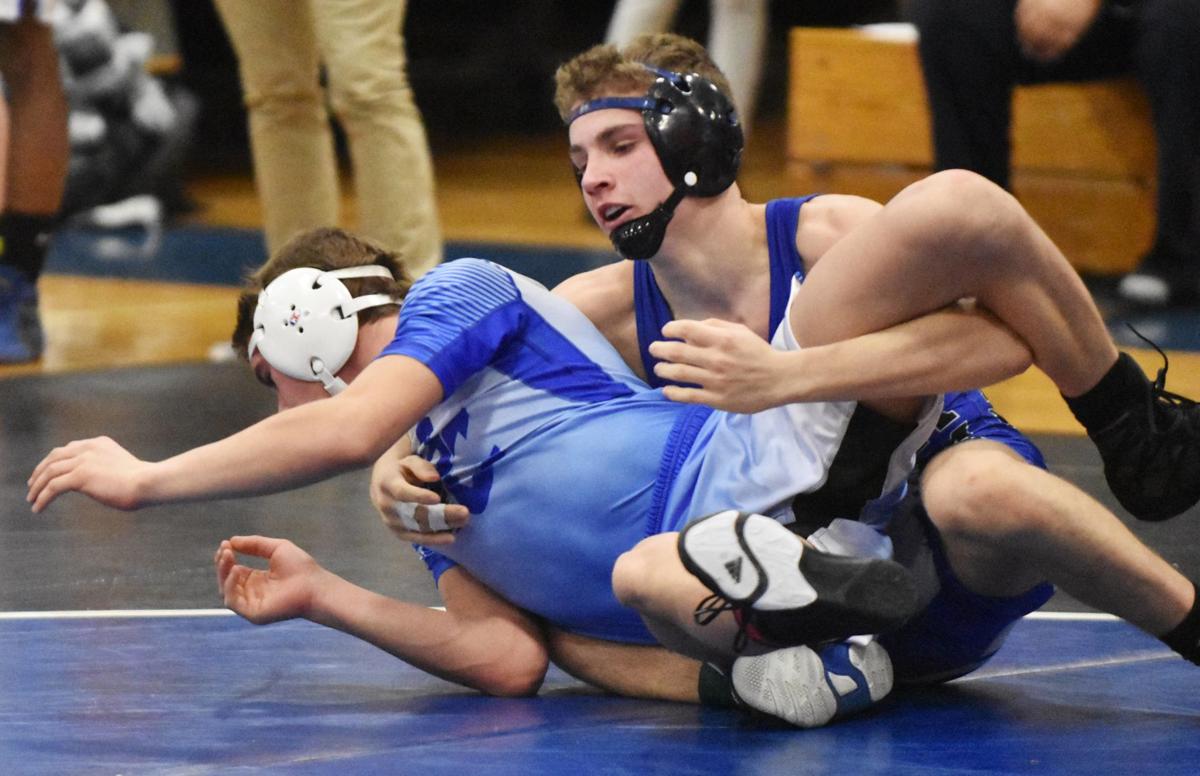 Camanche sophomore Eric Kinkaid works his Northeast opponent at a Indian home meet earlier this year, getting himself in position for a pin. 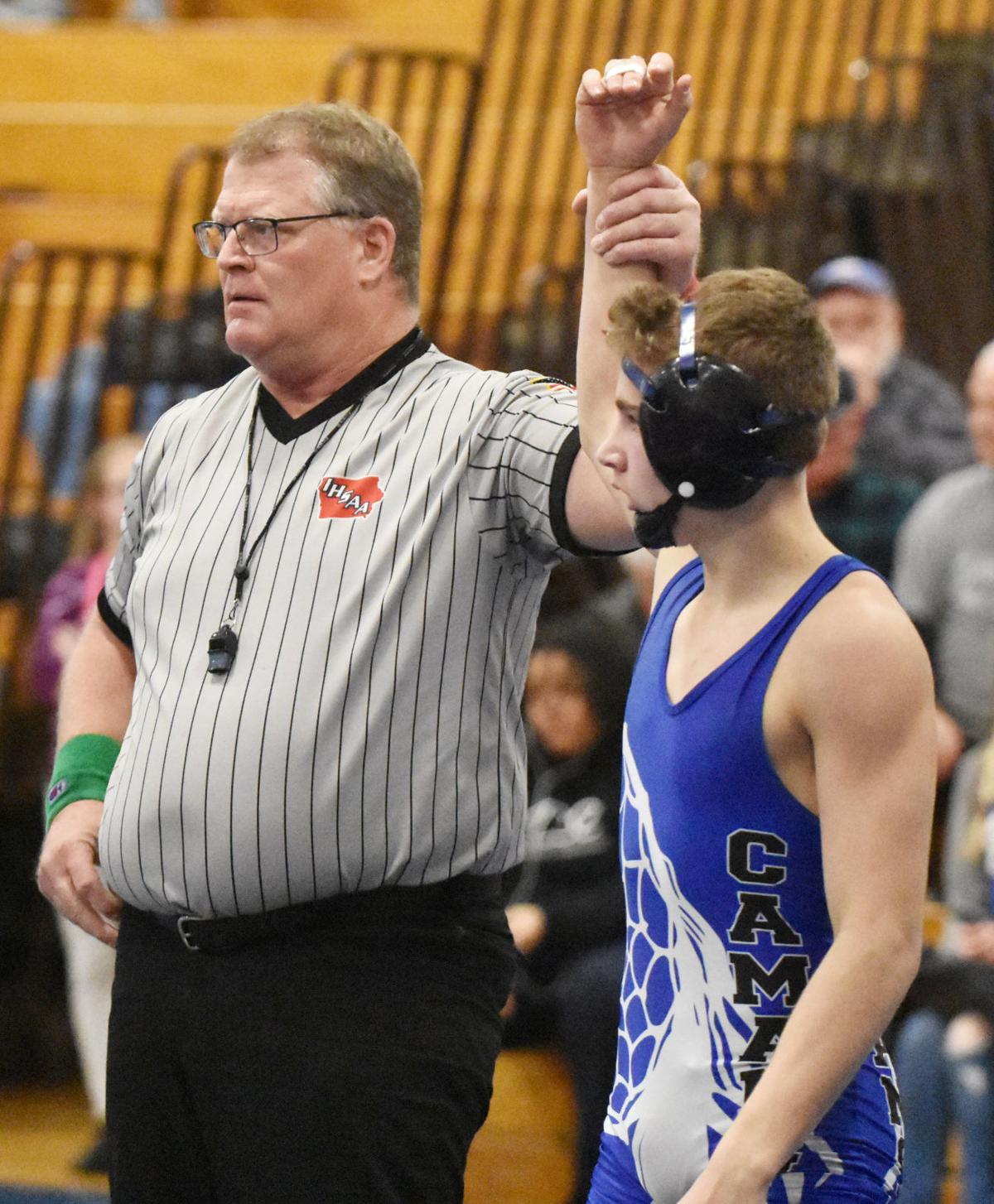 Camanche sophomore Eric Kinkaid is pictured after a win at the Indians’ home dual meet earlier this season.

Camanche sophomore Eric Kinkaid works his Northeast opponent at a Indian home meet earlier this year, getting himself in position for a pin.

Camanche sophomore Eric Kinkaid is pictured after a win at the Indians’ home dual meet earlier this season.

As a freshman wrestler, Kinkaid came out and impressed on a powerful Camanche wrestling team, qualifying for the state meet as an individual.

He didn’t stop there. He shocked everyone with an upset win in his first round, sending him to the Class 2A podium and home with some hardware.

“That was the most exciting part of the tournament for me,” Kinkaid sid, looking back at his first win. “I was looking forward to it before the tournament even started. I wanted to get that win, I didn’t want to lose in the first round and I knew I could do it.”

He’s back for his second year as a varsity wrestler, and off to an impressive start. He has just two losses so far, taking home a number of tournament titles along with his wins.

Not that that’s a surprise for the 132-pounder after last year’s success.

“Winning that first match made me want to win more and more and continue what I’m doing into this year and past this year,” Kinkaid said.

It’s not always easy to find success on the mats immediately at a young age. The Camanche Indians have a number of impressive wrestlers across the board, many improving every single year and peaking as upperclassmen.

But Kinkaid was powerful out of the gates, and still getting better.

“I think he’s that magical combination of his temperament, his abilities, his surroundings,” head coach Brent Carstensen said. “It’s all come together to make a special opportunity for him in high school.”

Kinkaid has been wrestling from a very young age, and definitely puts the time in the room. He’s a multi-sport athlete for the Indians, playing football and baseball as well, but wrestling is where he really focuses his time.

“This sport is my life, I love it,” Kinkaid said. “Wrestling is my thing. I love the other sports but when wrestling season comes around that’ all I think about.”

It helps that there’s some family influence, too. His father, Ryan Kinkaid, serves as an assistant wrestling coach for the Indians under head coach Brent Carstensen.

That’s made a difference for Eric.

“He’s been there since day one and has been helping me and he’s a reason I’m the wrestler I am today,” Eric said. “He pushes me and motivates me in the room and makes me a better wrestler.”

The Indians as a whole are a very close-knit wrestling team. They’re constantly on their feet supporting each other, and they certainly have plenty to be excited about.

For Kinkaid, one teammate he’s looked to since his freshman year is Brennan Kramer. Kramer is just a year older than him, but the two compliment each other. Kramer is one of Camanche’s most vocal and positive leaders, while Kinkaid is a very focused athlete.

Plus, Kramer wrestles just one weight class above Kinkaid, making him a key training partner.

“I’ve learned stuff from everyone but I learn a lot from Brennan Kramer,” Kinkaid said. “I wrestle with him every day and even though he hasn’t done the sport as long he’s earned so much so fast, even stuff I don’t know. He’s motivational and positive. I’m in the zone and he helps with that.”

Although there’s been plenty of leadership for Kinkaid to look to from freshman year to now. Both Baylor Crigger and Eric Campie, who graduated last year, were state qualifiers at times for the Indians.

Seniors Ben Vogel and Jason Huling have had plenty of success, Vogel a past district qualifier who will be looking to push through the postseason this year.

Jaxon Bussa and Logan Waltz are juniors and also will be eyeing postseason spots.

“I think we push each other,” Kinkaid said. “Everybody brings something to the table. We all get stuff from each other and it puts us up to the next level.”

Wrestlers across the state have had to deal with various cancellations for weather over the last few weeks, keeping them from competition. That means extra work in the practice room, and that’s certainly what Kinkaid and the Indians have been doing.

With sectionals and districts looming, there’s only one mentality: work hard.

“If I keep working and working harder I’ll get where I deserve and get where I need to go,” Kinkaid said. “My teammates will do the same.”