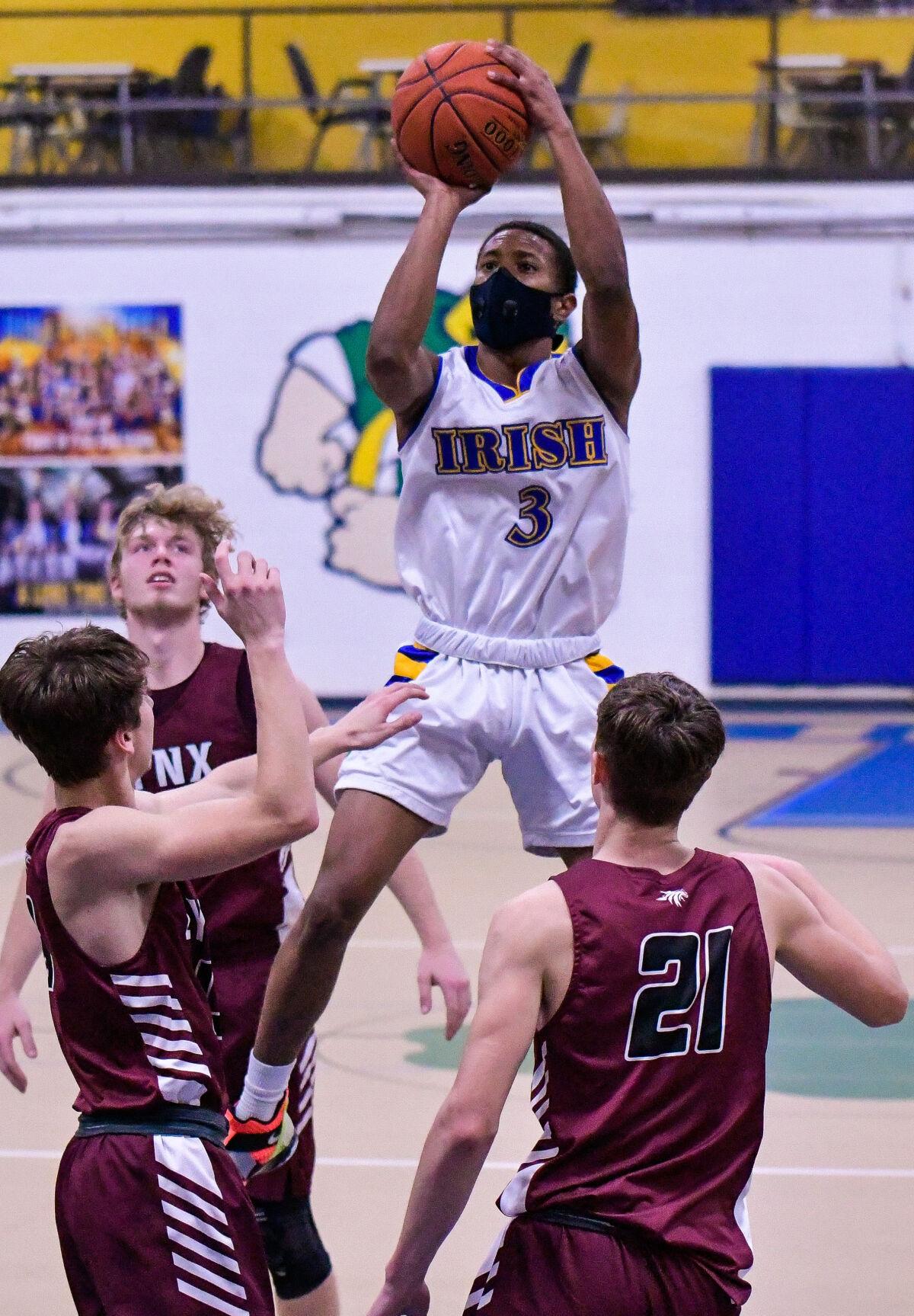 Prince of Peace’s DaSean Mingo (center) takes a jump shot during the Irish’s loss to North Linn on Dec. 8 in Clinton. 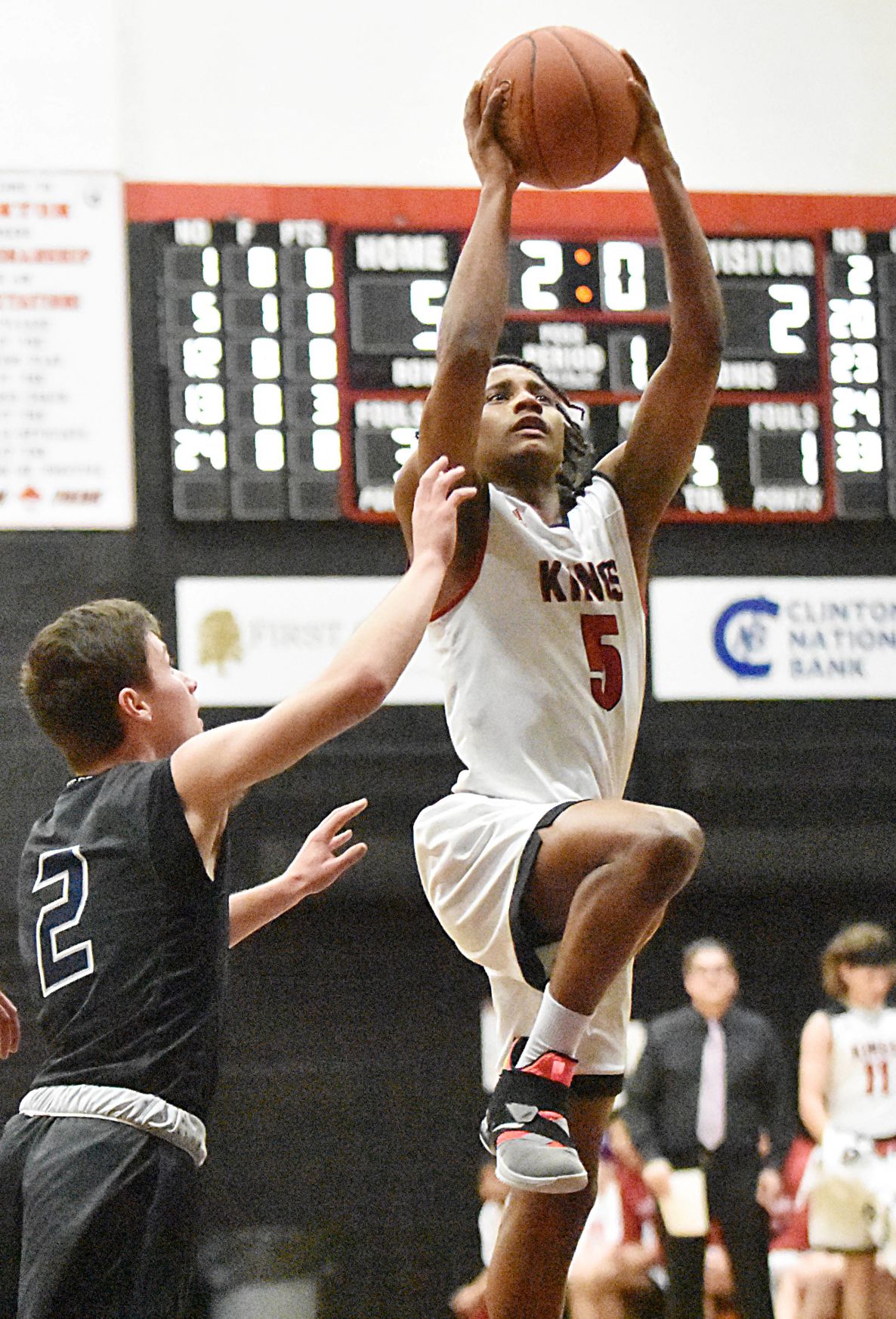 DaSean Mingo attempts a shot in the lane during the first quarter of a Clinton game last season.

Prince of Peace’s DaSean Mingo (center) takes a jump shot during the Irish’s loss to North Linn on Dec. 8 in Clinton.

DaSean Mingo attempts a shot in the lane during the first quarter of a Clinton game last season.

Growing up in Aruba can do that to a person.

But snow? He’ll take that any day.

Mingo, a senior on the Prince of Peace boys basketball team, has been in Clinton for two years as a foreign exchange student from Aruba. He speaks four different languages — English, Spanish, Dutch and Papiamento, Aruba’s native language.

He spent his junior year at Clinton and transferred to private school Prince of Peace his senior year because rules state that international students can only stay at public schools for one year. Mingo leads the Irish in points-per game (16.8), rebounds-per game (4.6), assists-per game (2.9) and steals-per game (4.4). He recently came back from a four-game absence after quarantining due to a possible COVID-19 exposure.

Getting to be one of the top players in the area has been no easy journey.

“I was feeling hopeless,” Mingo said. “I was like, ‘I’m not going to get to play that much anyway, but I had people motivating me and telling me to just stay ready in case.”

In Aruba, the basketball scene is a little different.

Mingo’s family is from the tropical island, and Mingo grew up playing for his dad on club teams. He was excited to get to the U.S. and play more varied competition.

“I was really excited to get out, see new competition,” Mingo said. “On an Island, there’s not many people, so you just play the same people a lot. I was really excited to meet and compete with better people. You play a lot of teams that are from different cities, different counties, so it’s really different (in the U.S.). Aruba is small. Most of the people I played against, I knew them. We were friends.”

Mingo said the vibe in America is much different from Aruba.

“Aruba is laid back,” Mingo said. “It’s a vacation island. Over here, I feel I’m actually more dedicated and I have more purpose for what I want to do.”

He credits his father with preparing him for a higher competition level in the states.

“He was always on me to go my hardest,” Mingo said. “It was tough at first, but I got used to it. He was always there. My dad always expected me to be doing the best — always. Like, no one is allowed to beat you. Then when I got home off the court, he would talk to me about it, so it was like no escape, but he really helped me to become better.”

Because Iowa High School Athletic Association (IHSAA) rules stipulate an international player must sit out 90 days upon arrival before participating in sports, Mingo only played five games at Clinton. To play his senior year, he had to transfer to a private school and wanted to transfer to Prince of Peace during the fourth quarter of his junior year.

Prince of Peace received all of Mingo’s paper work and his father came up from Aruba and registered him in February of 2020 — then COVID happened.

That set off a series of events that put Mingo’s basketball career in jeopardy.

Mingo ended up finishing his junior year at Clinton because the Prince of Peace administration felt it was in his best interest academically to finish the year at Clinton, under the circumstances.

Prince of Peace’s email request to forgo the 90 more days Mingo was required to sit out before competition was denied by the IHSAA. Prince of Peace felt that Mingo, due to not being able to transfer during his junior year because of COVID — which would have allowed him to play a full basketball season, even with the 90 days — had a reasonable case to be fully eligible for basketball season. If the IHSAA’s ruling would’ve held up, Mingo would not have been able to participate until January.

After that, Prince of Peace athletic director Jennifer Hansen-Wauford did a Zoom call with a special committee to appeal the decision, but was again denied.

“I kept saying, ‘I can’t believe this. This is unbelievable,’” Hansen-Wauford said. “That’s why we kept fighting it so much. Truthfully, after the second time I lost against that committee, he was down in the dumps. I felt so bad for him. I said, ‘We’re not done, we’re going to try one more thing.’

“He’s a happy-go-lucky kid and his whole demeanor had changed for awhile.”

Mingo said it was hard to keep hearing bad news.

“I was really expecting to get a whole season this year,” Mingo said. “Last year at Clinton, I only got to play five games. On top of having to wait 90 days, I also came like a month late to school, so I had to wait even longer. Going to Prince of Peace, I was expecting to have a full season and get some full varsity experience.

“Then I heard their requirement to sit out and I was like, ‘Dang, again?’”

Finally, Hansen-Wauford had to go in front of a judge against a lawyer from the IHSAA via Zoom. Prince of Peace did not have a lawyer present, but the judge understood the circumstances and overturned the decision, making Mingo eligible immediately.

“Because we did what was in the best interest for DaSean and looking at him academically instead of athletically, the judge overturned their ruling — he just said, ‘He should be eligible,’” Hansen-Wauford said.

When they received the final decision, Hansen-Wauford was beyond excited.

“The day I got the letter, I was so excited,” she said. “I was running up to his classroom, flew open the door of the classroom and I’m like, ‘We won!’ DaSean looked at me and he goes, ‘Me?’ And I’m like, ‘Yes! DaSean you get to play!’ He came over and he gave me a big hug. It was so awesome.

“It was worth every second of fighting for him because he’s a great student, he’s a great kid and he’s a really good ball player and he deserves to be able to play.”

Mingo didn’t know what was happening when he found out the good news.

“She came in running, I was like, ‘What is happening?’” Mingo said. “I saw her face and then she told me, and I just wanted to cry. I was so happy.”

He returns the favor by doing his best on and off the basketball court.

“I’m extremely grateful,” Mingo said. “She still helps me out to this day and I don’t know how to repay her. I’m just going to do my best every time, because if it wasn’t for her, I wouldn’t be having a full season.”

Hollywood hasn’t come calling for Mingo’s story yet, but at times, it felt as if they were in a movie all along.

“It’s almost like a movie,” Hansen-Wauford said. “The best part of this is, if he could get a really good scholarship to a school and play basketball, that would be a great ending, wouldn’t it?”

Mingo — besides the brief quarantine during the season — has been able to play his senior year without any complications and his time with the Irish has gone well.

There was an adjustment period, though.

“It started off rough,” Mingo said of the team chemistry. “We didn’t really know each other that well, but as practice and games went by, we got pretty close and now we’re doing great.”

Playing under coach Gerry Murphy has done wonders for his game, too.

“He really believes in me,” Mingo said. “He always tells me to shoot more, be focused, be a leader on the court and off the court. He really motivates me to do better.”

The Irish are now gearing up for a postseason run. Mingo knows what he has to do

“I’m just trying to go as hard as possible because I know some of these guys depend on me to do my best and I can’t really have any off days on the court,” Mingo said. “I try to be a good team player as well.”

If the past year has proven anything, it’s that Mingo will handle any challenges thrown at him.

“He’s got a lot of grit to him and he’s very resilient,” Hansen-Wauford said. “He’s just a fun kid.”