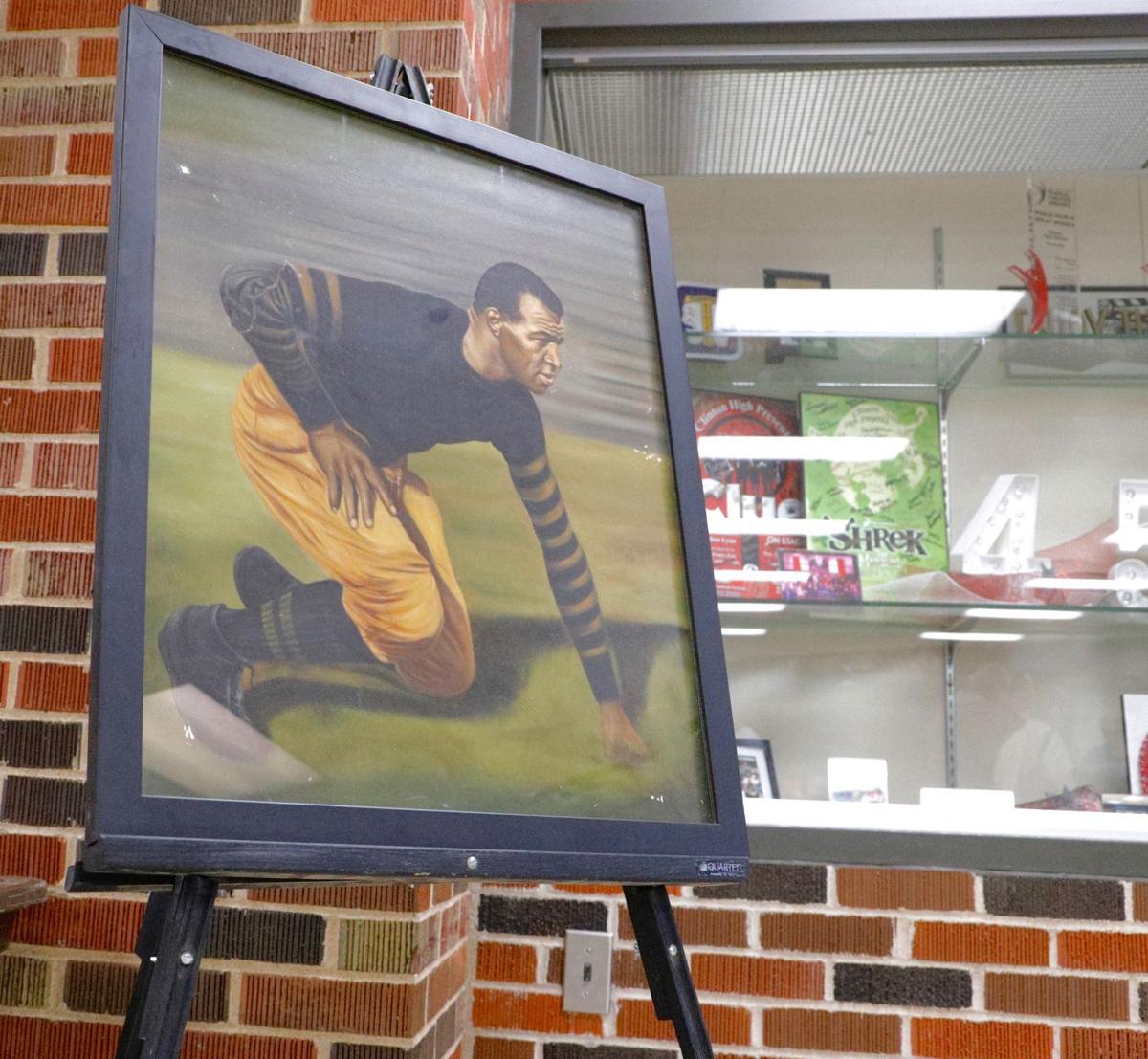 Frederick “Duke” Slater played football for Clinton High School from 1913-1915 and for the University of Iowa from 1918 to 1921. He was a first team All-American in 1921 and a member of the Hawkeyes’ 1921 national championship team. His photo was displayed during a history celebration at CHS. 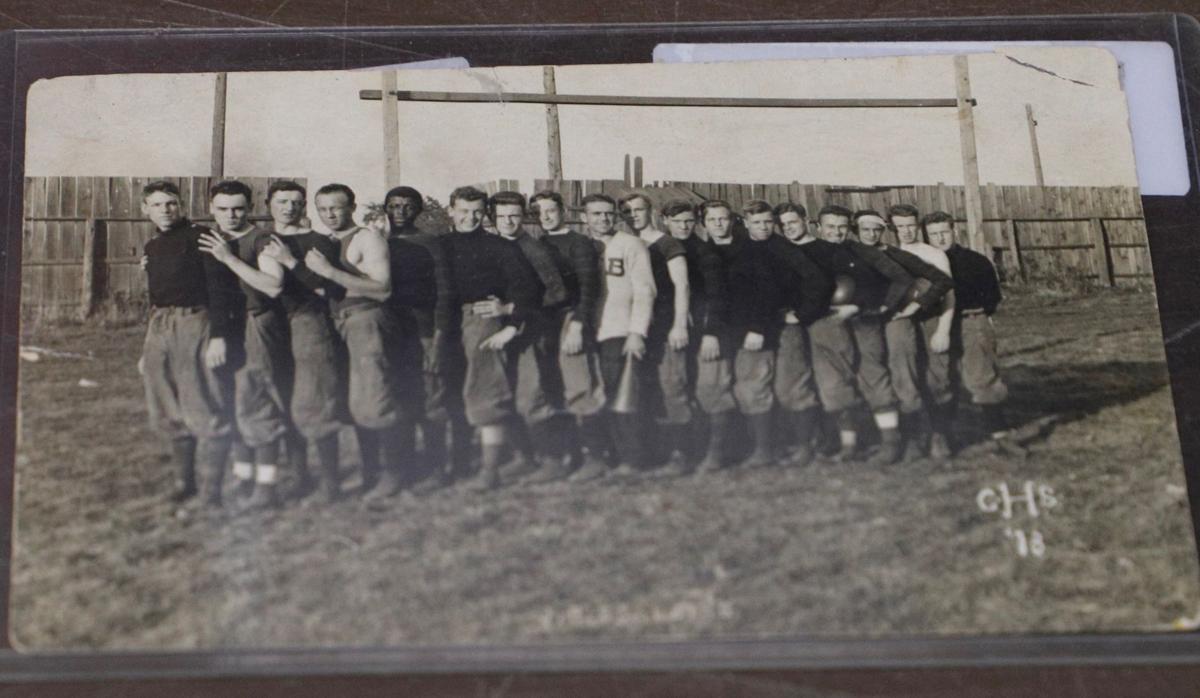 Frederick “Duke” Slater played football for Clinton High School from 1913-1915 and for the University of Iowa from 1918 to 1921. He was a first team All-American in 1921 and a member of the Hawkeyes’ 1921 national championship team. His photo was displayed during a history celebration at CHS.

CLINTON — The Clinton LumberKings are celebrating one of the most — if not the most important sports figure to ever come from Clinton, Iowa on Saturday.

The LumberKings are hosting a Duke Slater bobblehead night, commemorating the Pro Football Hall of Fame inductee who played at Clinton High School, the University of Iowa and then in the National Football League from 1922-1931.

The first 750 fans with a paid admission to the LumberKings’ game against the Normal Cornbelters 6:30 p.m. Saturday get a one-of-a-kind Duke Slater bobblehead approved by the Pro Football Hall of Fame. There will be Hall of Fame-themed door prizes as well.

Neal Rozendaal, an author and lifelong Iowa Hawkeyes super fan, will be in attendance at the game Saturday as a representative of the Slater family. He will also have some of his books available at the game, one of which is a biography on Slater.

“I just found him to be a fascinating individual and his life story is really amazing,” Rozendaal said. “At that time, he was not in the Pro Football Hall of Fame and I knew this was a guy who belonged in the hall of fame. I wanted to feature him and be able to write more about him.

“He’s just such a compelling individual. He’s someone who has such a unique history within sports and he’s the kind of guy who’s really a role model for any young kid growing up.”

Slater was elected to the NFL’s 2020 Centennial Hall of Fame class, but is officially being recognized in this year’s induction after last year’s was canceled due to COVID.

Rozendaal led a campaign trying to get Slater inducted.

“He’s finally getting the recognition he deserves,” Rozendaal said.

Rozendaal said he is one of the most talented players to ever play the game.

“He was always one of the largest players on the field,” Rozendaal said. “He was exceptionally strong. He was a guy who had a background — because of the fact that he came from a poor family — he had to do manual labor jobs to really pay his way through the University of Iowa.

“He’d haul brick and he’d shovel gravel, he’d move concrete, and he’d do these kinds of blue-collar jobs that made him exceptionally strong, so even when there were other players his size on the field, Duke Slater was one of the strongest guys out there. He was also extremely quick — he’d play on punt returns and kickoff returns, and he was often one of the first guys down the field despite the fact that he was a big lineman.”

Slater was inducted in the inaugural College Football Hall of Fame class of 1951. Though he is most recognized for his football prowess, Slater had a second act of life that was just as successful.

“He was someone who used football as a springboard to even greater things in life,” Rozendaal said. “He was able to use his fame at the University of Iowa and the fact that everybody on the campus just admired and revered him to come back to Iowa — he came back during the offseason when he played in the NFL and was able to earn his law degree in 1928.

“His post-football career is almost as significant as what he did on the field.”

Though he went to high school in Clinton, Slater was born in the south side of Chicago and eventually settled down there after his playing days. In 1948, he was elected to the Cook County Municipal Court and received nearly a million votes. Slater was the second African-American judge in Chicago history.

“I’m very excited to see the city of Clinton recognizing Duke Slater because one of the things that I found in my research is that he loved Clinton,” Rozendaal said. “He moved there when he was about 13 years old and he went to high school at Clinton — he had some great days there. Even after he had become a judge, he made frequent visits back to Clinton to see his family and friends there. He loved the town there and he was very proud of the fact that he was from Clinton, Iowa.

“My hope is that his election to the Pro Football Hall of Fame is a really special moment for the folks in Clinton because he really was a native son of that town and he had a lot of love for the city of Clinton. I’m excited to see them have an opportunity to celebrate his legacy, because he was certainly a proud member of that community.”

Slater had his bust unveiled back in April — now, he’s just weeks away from being officially inducted.

“Anytime you go to Canton, Ohio, you’ll be able to see a bust of a Clinton High School native,” Rozendaal said. “To me, that’s just a wonderful thing.”