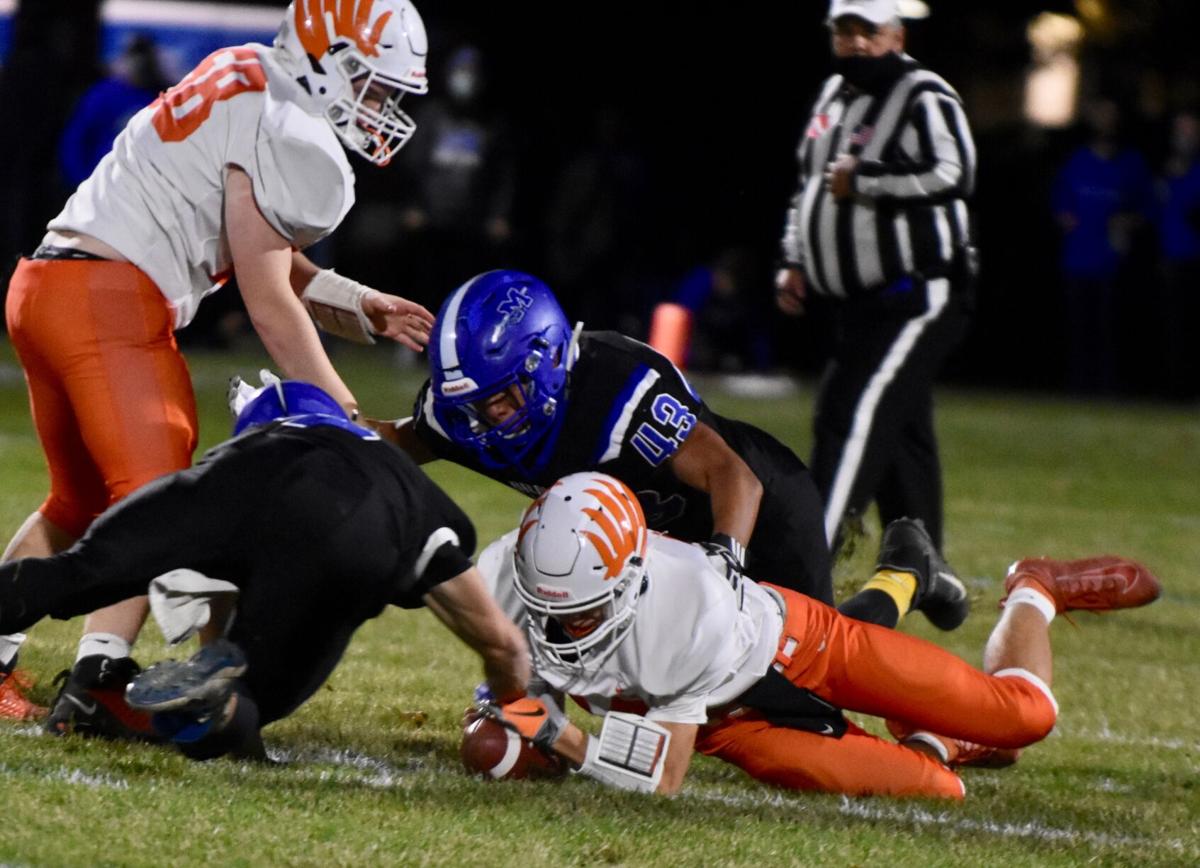 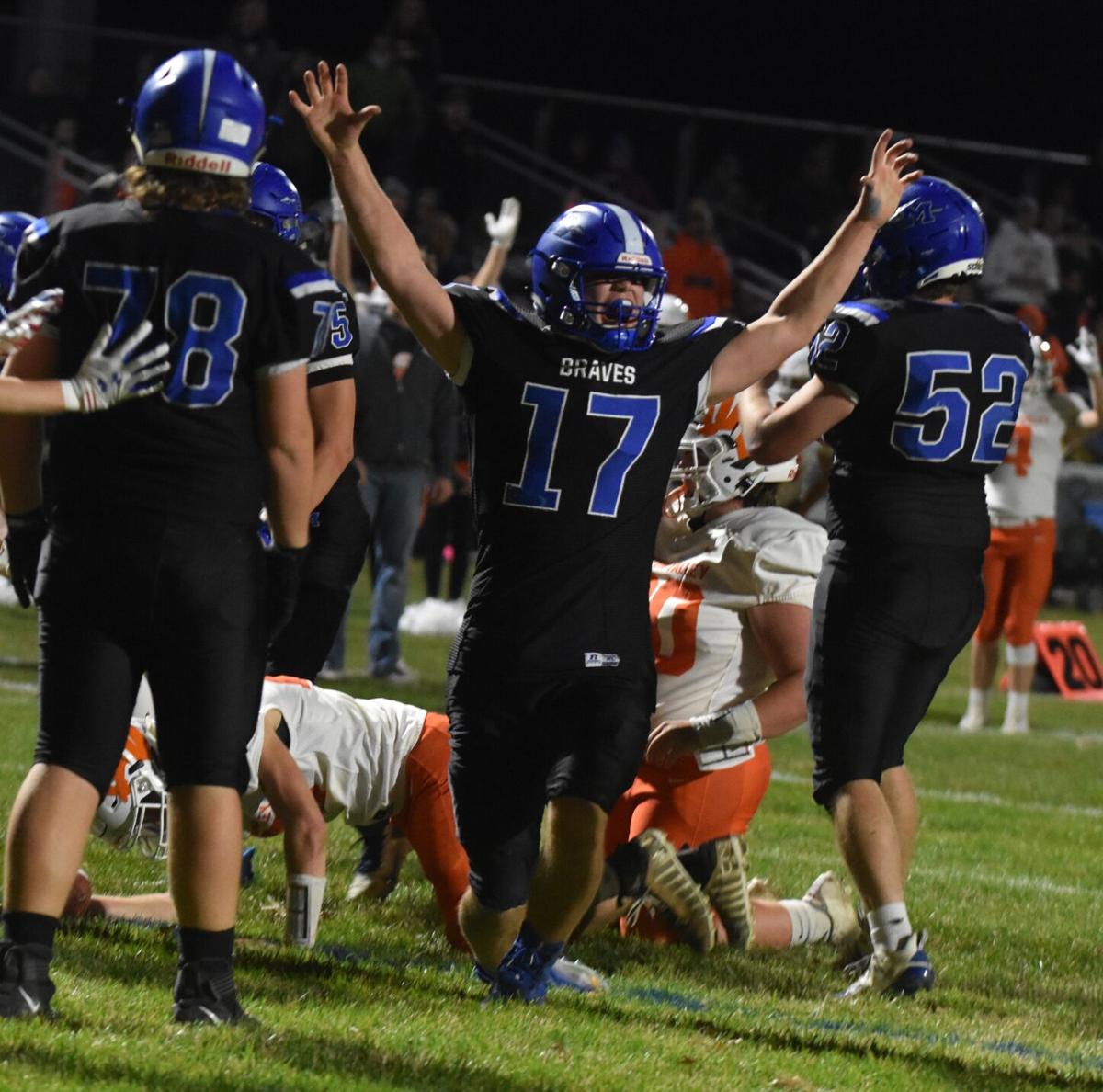 Montezuma quarterback Eddie Burgess celebrates after a touchdown during the Braves’ playoff win over Easton Valley Nov. 6 in Montezuma. 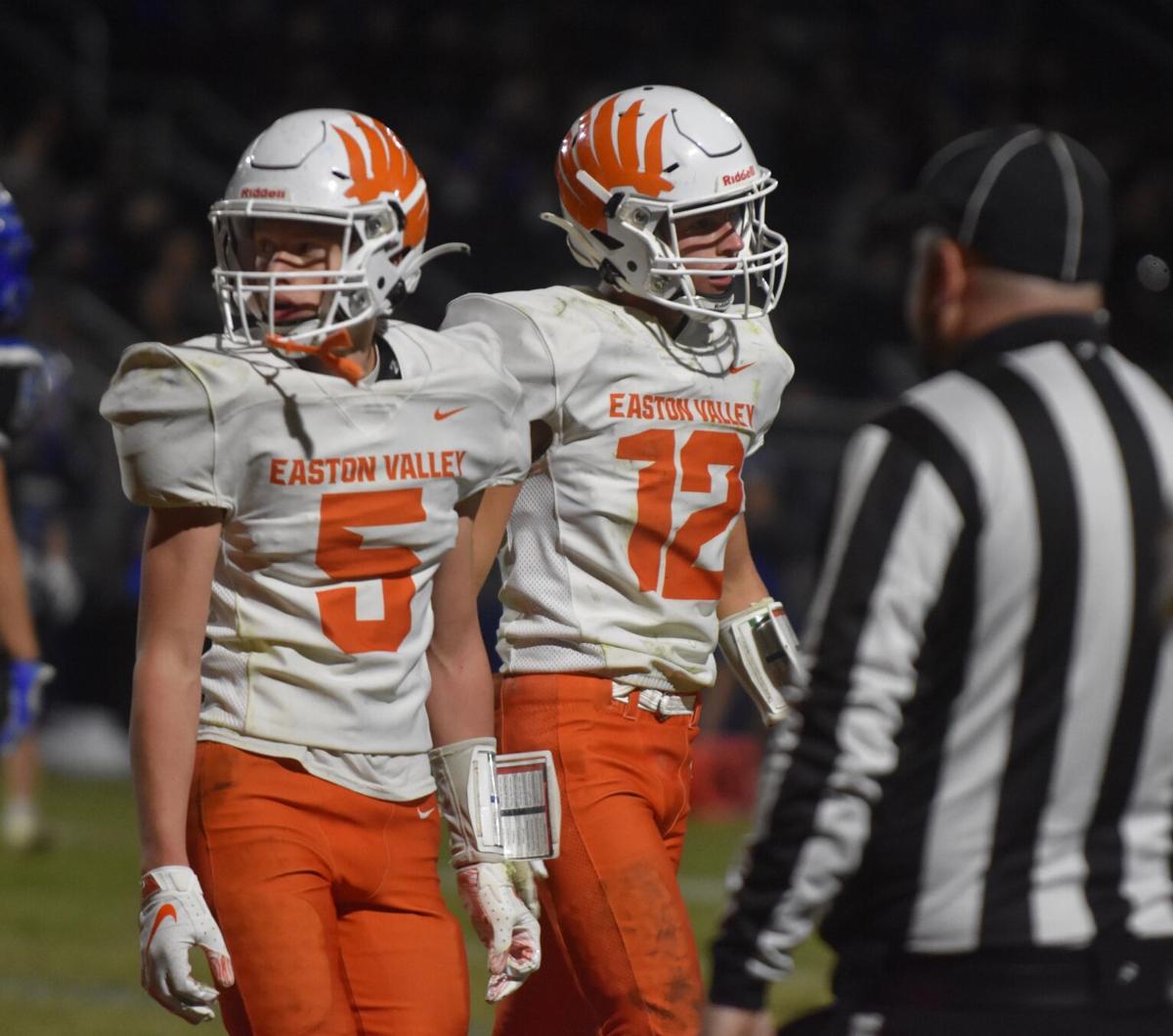 Montezuma quarterback Eddie Burgess celebrates after a touchdown during the Braves’ playoff win over Easton Valley Nov. 6 in Montezuma.

MONTEZUMA — As the Easton Valley football team exchanged hugs and words of encouragement for the final time, coach Tony Johnson looked at his 18 players.

“It’s year three in the program and some of these seniors started for me as sophomores,” Johnson said. “I love these guys. They just play their hearts out. We’ve got 18 guys padded up and they just give me everything they’ve got all the time.

Montezuma defeated the River Hawks 62-35 in an 8-man football playoff quarterfinal on Friday.

Easton Valley had some early turnovers and had trouble containing Braves quarterback Eddie Burgess, who led almost every offensive category. He had 517 passing yards on 29-of-43 passing with seven touchdowns and two interceptions, and had a rushing score. The Braves built a 40-22 halftime lead and controlled the second half.

The River Hawks ended the season in the quarterfinals for the second-straight year.

“The early turnovers were key,” Johnson said. “I think we started to get a rhythm offensively, we were able to throw the football but those turnovers — you can’t turn the ball over against a team like that. That’s a great football team and in my personal opinion, that’s the team to beat. That really put us behind the eight ball and it was a struggle fest after that. It took us out of what our game plan was going to be.”

Two minutes into the first quarter, Montezuma’s Trey Shearer intercepted Easton Valley deep in Braves’ territory, and Montezuma scored in three plays — a 26-yard pass from Burgess to Kodie Strong, a 44-yard Burgess run and then a 17-yard TD pass to Cole Watts for the first score of the game.

After the River Hawks went three-and-out, the Easton Valley defense stopped Burgess on a rush attempt on fourth down and one, giving EV the ball back.

A 60-yard run from Fuegen set the River Hawks up deep in Montezuma territory, but a fumble a few plays later turned the ball back over to the Braves.

Burgess launched a 53-yard pass to Watts and then ran it in on a four-yard TD to make it 13-0 with 3:26 remaining in the first quarter.

The River Hawks responded with a 10-yard, play-action TD pass from quarterback Conor Gruver to Parker Olson with under two minutes to go in the quarter, but the Braves came right back with a 19-yard TD pass from Burgess to Strong on third-and-goal to begin the second quarter, making it 20-6.

With 7:52 remaining in the second, the River Hawks faced a fourth-and-goal from the two-yard line, but the Braves’ defense stepped up and stuffed a Murphy run at the one-yard line.

Both Murphy and Johnson thought it was a TD.

“I was looking down, I crossed the plane and Burgess hit me and I came behind the line,” Murphy said.

Burgess completed a 79-yard shovel pass to Watts for a score the very next play, increasing Montezuma’s lead to 28-6.

“That one hurt,” Johnson said.

Fuegen scored on a one-yard direct snap, but that was followed by back-to-back Montezuma TDs on a 57-yard pass to Strong and a 50-yard pass to Shearer, making it 40-14.

“Definitely just their depth and the depth of their diversity,” Fuegen said. “Their quarterback could freaking sling the ball all around the field to a multitude of receivers and he could run the ball like no other. Just all of that combined makes them a really tough football team. They’re going to be tough to beat.”

Fuegen caught a 30-yard TD pass from Gruver and had a rushing TD in the second half.

“The one thing I love about Porter, he leaves everything on the field,” Johnson said. “He just did an outstanding job again. His efforts are just amazing and he’s a great leader. I’m going to miss him a lot.”

Fuegen is proud of what the seniors accomplished.

“We’ve been together since we were young,” Fuegen said. “We’ve always loved football so much and we’ve worked so hard at it. It’s just been our goal to be successful and leave our legacy. I think we did a pretty good job.”