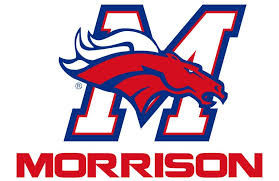 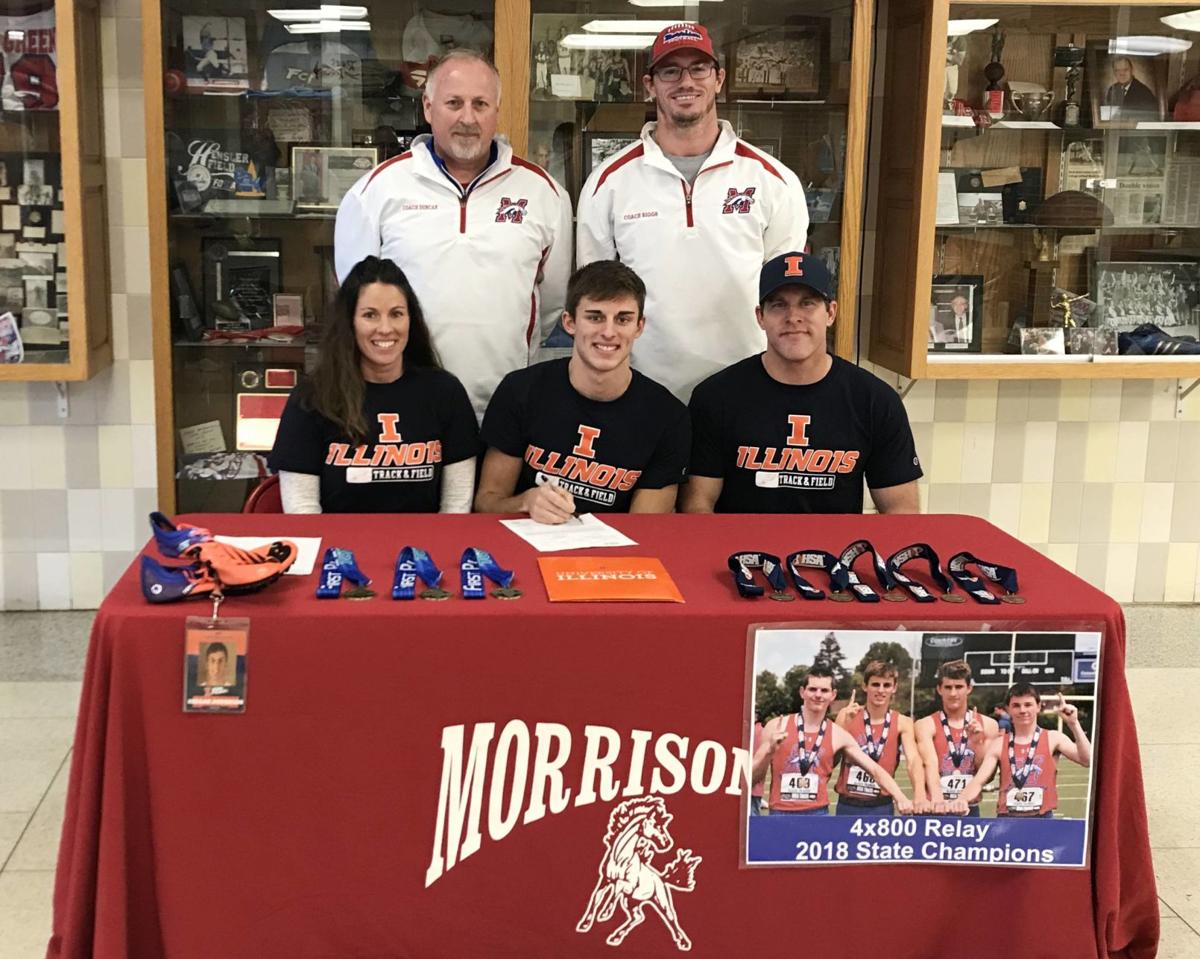 In this photo, Morrison head track coach Tim Duncan (back left) and assistant coach Sammy Biggs (back right) pose with athlete Keegan Anderson and his parents while he signs his letter of intent to run at the University of Illinois. Duncan is retiring as head coach of the program after over three decades, with Biggs taking over in the head spot.

In this photo, Morrison head track coach Tim Duncan (back left) and assistant coach Sammy Biggs (back right) pose with athlete Keegan Anderson and his parents while he signs his letter of intent to run at the University of Illinois. Duncan is retiring as head coach of the program after over three decades, with Biggs taking over in the head spot.

He still stepped down from his position after over 30 years of leading the Mustangs.

Still, it’s not exactly the retirement party Duncan was planning on throwing. The Mustangs were ranked as the preseason No. 1 team in the Class 1A after a fourth place finish last year.

“You’re not supposed go out like this,” Duncan reflected.

Duncan is from Indiana, coming to Morrison and leading the Mustangs for over three decades. He knew at the beginning of the season that it would be his last.

The storyline was supposed to be different. After placing fourth last year while riddled with injury and misfortunes, the Mustangs were poised to come back as one of the top programs in the state.

“At some point I had to come to grips with it,” Duncan said. “If it was my first or second year coaching … I’m an older guy and you learn that you can’t control anything that’s beyond your control. You just have to go with it. Were all disappointed, it’s terrible.”

Duncan, who’s not much for accolades, brushes off many of the things he’s seen in his time and credits the athletes instead. But – he recognizes that this year was going to be something special.

The Mustangs returned their state lineups from the year before. Duncan called it “kind of a generational thing”.

“I’ve had great teams don’t get me wrong, but on paper this team had the talent,” Duncan said.

Through his years as a coach in the track program and in other areas, he’s learned plenty. The biggest thing, though, was not to focus on the milestones.

He says the accomplishments can speak for themselves. It’s all about the people his programs are producing.

“Probably the biggest thing is that even though you want the kids to have success, that’s not what it’s really about,” Duncan said. “It’s about making them better people so after theyll be good husbands, good fathers, good members of society.”

That society just happens to be small town Illinois for a lot of them. Morrison houses a population of right around 4,000, and that small town feel has bled into the way Duncan approaches his coaching.

“It’s definitely about the people. the family atmosphere, that what we talk about in track all the time,” Duncan said. “We’re just like a family, we have our moments but we always have each others’ backs.”

That family feel has showed itself gloriously in Duncan’s successor. One of his former athletes is taking over at the helm of the Morrison boys’ track and field team: Sammy Biggs.

Biggs won multiple state medals, including state championships, during his time with the Mustangs and graduated in 2006. He moved on to a Division I track program and later returned to Morrison to become and assistant coach at the school that molded him.

He’s been on the field for the last few years, the Mustangs’ biggest supporter. Duncan has the utmost confidence in handing the program over to one of his best runners.

“You won’t find many people more passionate,” Duncan said. “His commitment, his knowledge of track, and he just has this thing that kids don’t want to disappoint him. I don’t know that that’s something you can learn. He just has it.

“Just because you’re an awesome athlete it doesn’t always translate into an awesome coach. But it helps that when he says something it’s believable because he’s done it.”

His coaching philosophy of building good people over good athletes is part of his confidence.

“Of course you want to build your program and have talent, but the most important thing is make them good people,” Duncan said. “That’s what’s so great about where I’m at now and leaving the program to Sammy. I know it’s in awesome hands. Not because of his accomplishments but because he’s an awesome person.”

The whole Morrison community is still reeling from the disappointment from the cancellation of spring sports. Many runners are moving on to college careers.

But many will also come back. The cupboard is not bare for the Mustangs next year, another exciting season in store for 2021. This time in new hands.

It will be in Biggs’ hands that time around.

That doesn’t mean Duncan won’t be near by. He’s poured a lot of passion into his time with the Morrison School District and with the town. He’ll be watching, and remembering what made his job so fulfilling.

“It’s the people,” Duncan said. “You can go to any community and kids will say ‘I can’t wait to get out of here’. But it’s funny how many kids I see that are former students, and they’re raising their kids here. That says something in itself.”