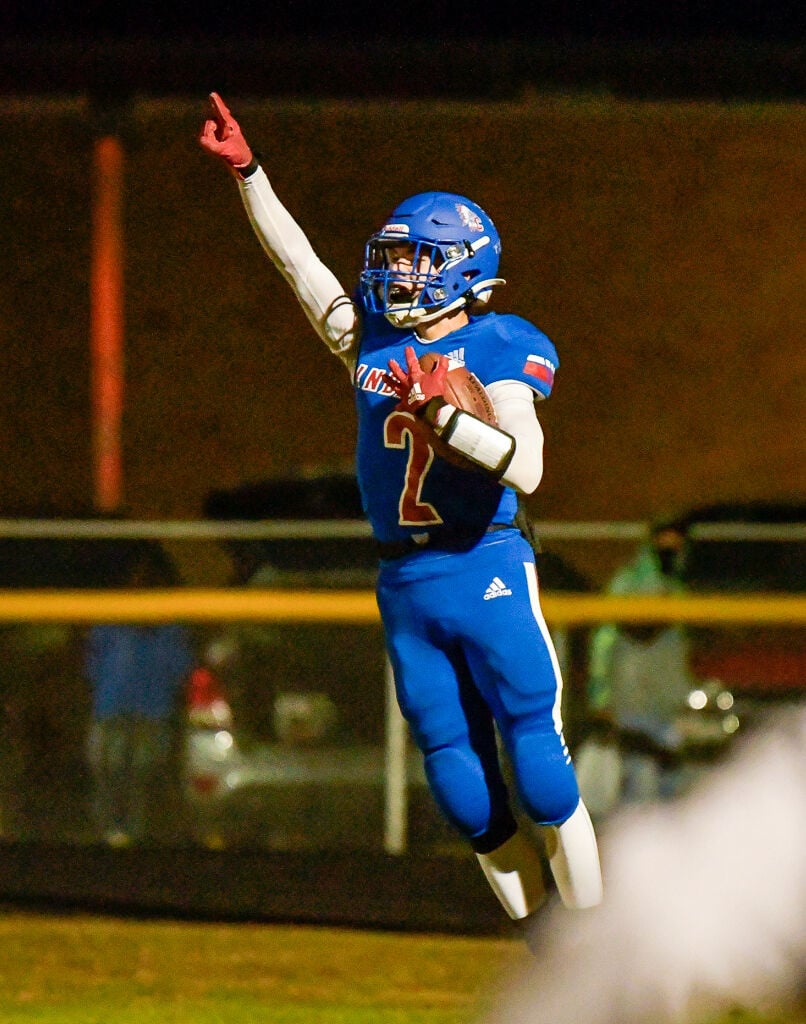 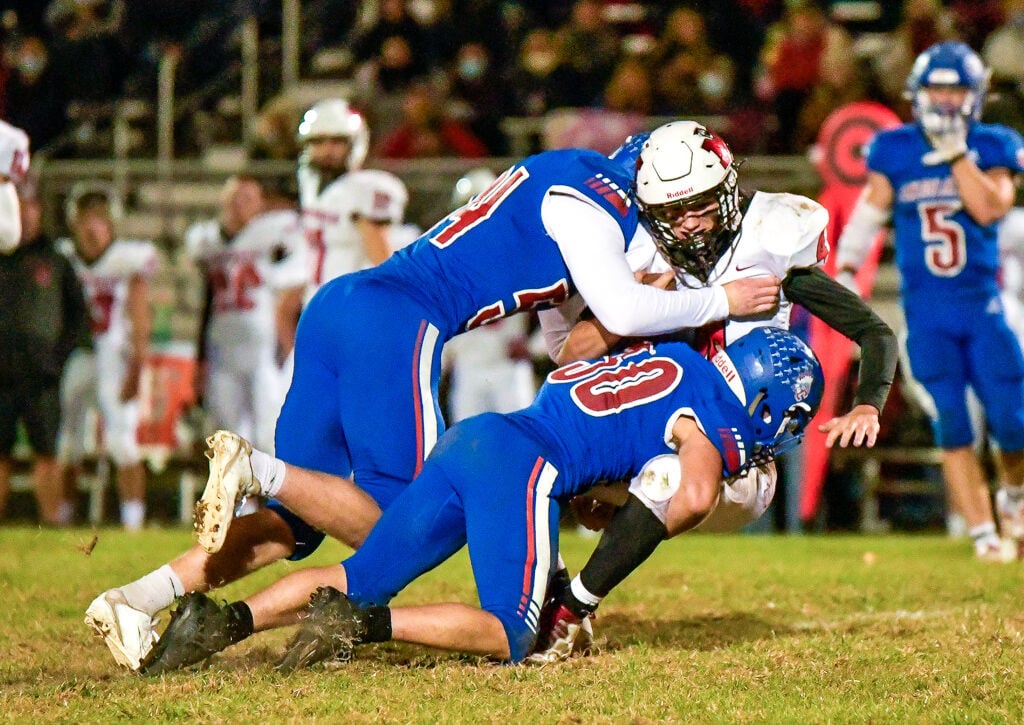 Camanche’s Zayne Feller (top) and Eric Kinkaid (bottom) make a tackle on a Monticello ballcarrier on Oct. 2 in Camanche.

Camanche’s Zayne Feller (top) and Eric Kinkaid (bottom) make a tackle on a Monticello ballcarrier on Oct. 2 in Camanche.

CAMANCHE – With a minute to go in the first half, the No. 8 Camanche football team was seeing something no one could have expected.

With a significant lead already, Logan Shaw stripped a ball out of a Monticello player’s hands on a rush attempt. Nolan Kagemann landed on it, and just a few seconds later the Indians punched it in the endzone for a 34-7 lead over a top-10 team.

“We got on them early,” head coach Dustin Coit said after the win. “And our defense was really good tonight. Monticello has a ton of fire power and our defense set the tone, made a lot of nice plays and shut them down. Then our offense made the plays when they needed to.”

The Indians took a dominant and unprecedented win from the No. 6-ranked Monticello Panthers at home on Friday night. On paper, everything seemed to be in Monticello’s favor.

The win was the Panthers’ first loss and leaves the Indians alone at the top of Class 2A District 5.

The size difference didn’t scare the Indians. Two of the smallest on the roster – Eric Kinkaid and Logan Shaw – made huge plays for the Indians in the first half. Kinkaid had multiple tackles for loss and Shaw stripped a ball in the first half that turned into a touchdown.

Kinkaid wrestles for Camanche – at 132-pounds. He’s been the leading tackler for the Indians all season.

“Our defense is just on another level right now,” Kinkaid said. “Every position is strong and we’ve been really performing.

“Everybody on the team felt the momentum today. We focused on our quickness and our athleticism. That’s what we practiced all week and I think we executed.”

It was all part of an overall defensive effort that impressed. Plays in the backfield were rampant for Camanche. Monticello quarterback Luke Lambert came in with nearly 1,100 passing yards and the Indians had him targeted.

“He’s their primary runner and playmaker,” Coit said about Lambert. “I thought we did a nice job. He took a lot of shots and our defense was great.”

Lambert threw two picks, double what he’s thrown this season. The Indians also kept him from making a complete pass in the entire third quarter.

The Indians made a stop on the first drive, and then they utilized their possession. They made slow progress down the field before reaching fourth down and two. With just 24 yards to the endzone, they went for it.

Quarterback Mike Delzell tossed a pass to Logan Shaw near the visitor sideline, who grabbed it and extended the play to the 15-yard line. The next play, Cade Everson broke through and crossed the goal line for the first score of the game.

“[Shaw] made a good play for me and that started to open things up for us and gave us momentum,” Delzell said. “The outside linebacker and corners were playing pretty far back and I knew they were going to jump the curl route.”

A good kick from Logan Waltz and the Indians nabbed a 7-0 lead they’d never relinquish.

Another stop, and Delzell launched a long pass downfield to Jordan Lawrence, who pulled it in to double the lead.

“We knew they were going to try to blow Cade [Everson] up and open up the box, so we thought it would open up the pass a bit,” Delzell said. “That’s exactly what they did.”

Monticello cut that in half, but Camanche had a quick answer. Mike Delzell took the ball on a quarterback keep and gained a crucial first down. Delzell then sent a ball flying 26 yards into the hands of Kyle DeWeerdt in the endzone.

“Mike is playing really well,” Coit said. “He made a lot of nice throws tonight, put them on the money. He keeps getting better each week. He’s got a knack for reading the defense and throwing it to the right guy when we need it.”

Cade Everson scored twice more in the first half for a 34-7 lead by halftime.

Camanche (5-1, 4-0) is looking for a district championship after the win. They remain the only team in the district with no district losses and welcome Maquoketa (4-1) next week. Beating the Cardinals would clinch the title for the Indians as they near the end of the coronavirus-shortened regular season.

“I feel great with where we’re at,” Coit said. “If we can get that district championship, we’re probably looking at a first round bye in the playoffs and we’ll absolutely take that.”