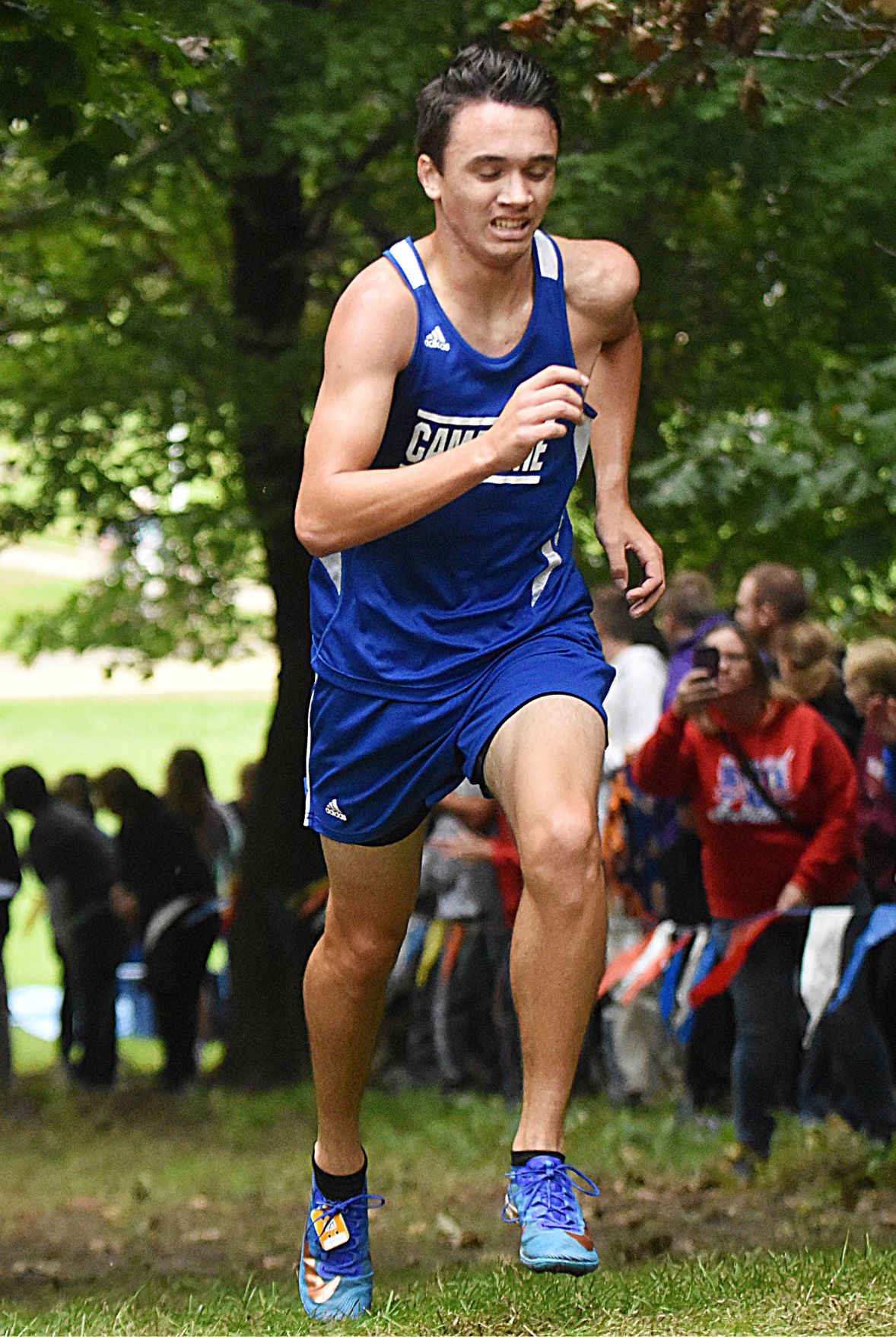 Camanche junior Dylan Darsidan sprints towards the finish line at the Jim Hetrick Invitational in DeWitt last week, which he won. 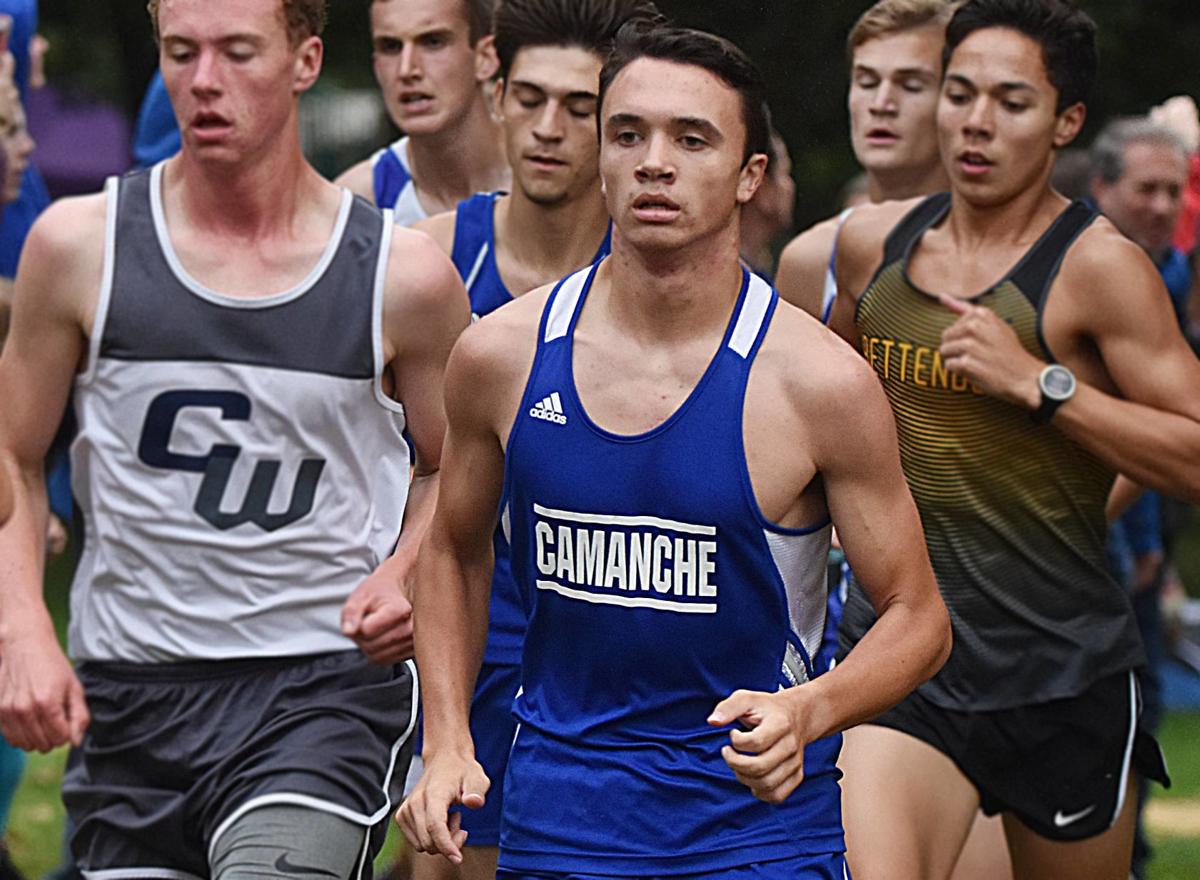 Camanche junior Dylan Darsidan runs with a pack at a cross country meet in DeWitt.

Camanche junior Dylan Darsidan sprints towards the finish line at the Jim Hetrick Invitational in DeWitt last week, which he won.

Camanche junior Dylan Darsidan runs with a pack at a cross country meet in DeWitt.

In fact, the No. 1 ranking put a little weight on his shoulders.

“I’m a little nervous, especially being thrown into the No. 1 spot,” Darsidan said. “It kind of shows me where I am and I’ve been able to see where I am against some of the top in the state.”

He slipped to No. 2 in the IATC rankings this week after the River Valley Conference meet where he took second. It was the first race of the year where he didn’t take the gold medal, which impressive considering his competition.

Just at the River Valley Conference meet he had to run against Tipton’s Caleb Shumacher and Bellevue’s Brady Griebel, the No. 1 and No. 3 ranked runners in all of 2A.

He’s used to it. After missing all of freshman year to injury, Darsidan came back and powered through sophomore year to end up with a 7th place medal at the Iowa High School Cross Country Championships in Fort Dodge.

When he received his medal on the deck in October of 2018, he felt accomplished but knew there was more coming.

“It felt really cool, especially after missing all of freshman year,” Darsidan said. “It really gave me a sense of what one year of me being healthy could do for me. It was relieving, but it was kind of a disappointment with knowing where I could have been.”

He had success in track season as well and once summer hit, he hit the streets of Camanche. All summer he put in mile after mile, running over 300 in the offseason.

“I was seventh in state and I wasn’t able to run much that summer before,” Darsidan recalled. “I knew I was so close to being in the top five that I was going to start the season in a high spot and putting in more miles would give me a good chance of having a good season. It’s helping a lot right now.”

He came out winning and he kept winning. In just one week, he managed to beat Shumacher and Griebel twice to take the No. 1 ranking in 2A.

“I wasn’t exactly sure how my season was going to go when I started, but once I was able to beat the No. 1 runner twice and move into the No. 1 spot, it felt pretty cool,” Darsidan said.

The Indians made school history last year, qualifying for the state meet as a boys’ team or the first time.

Returning a number of runners, including Darsidan, they’re looking for something similar. They’re currently ranked No. 9 in the state but have the hunger for a place at state this year.

They do have a number of threats before they get there, including No. 1 ranked Tipton and No. 3 ranked Monticello, who they’ve been chasing all year.

“They’re really dominant as a team,” Darsidan said. “We’re trying to get as close as we can but there are other teams we’re keeping in mind. We just need to put together good team performances that we expect.”

That included him turning into a leader for the Indians. He’s joined by senior Dodson Melchiori and senior Zach Leu, who both bring experience and seniority. They’re hoping to bring along some of their younger runners at they prep for districts on Thursday afternoon.

He may be going into the state-qualifying race with a No. 2 before his name, but that’s no matter to him. He’s proven multiple times that he’s capable of beating anyone in Class 2A and what the IATC rankings say doesn’t matter come Nov. 2 in Fort Dodge.

“I try to think of it as a placeholder until the state meet comes,” Darsidan said. “I want to show that I’m No. 1 at the state meet and that’s when it matters most.”