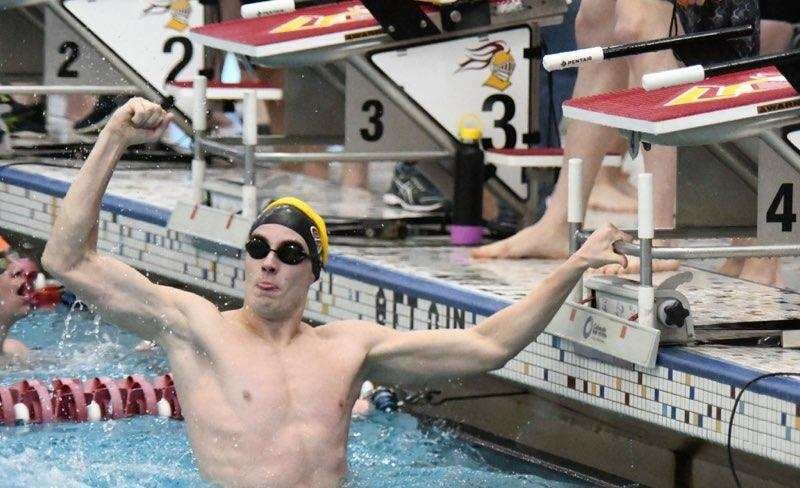 Sam Norman reacts when he sees his relay team’s time after swimming the anchor leg of the 200 Yard Freesyle Relay. 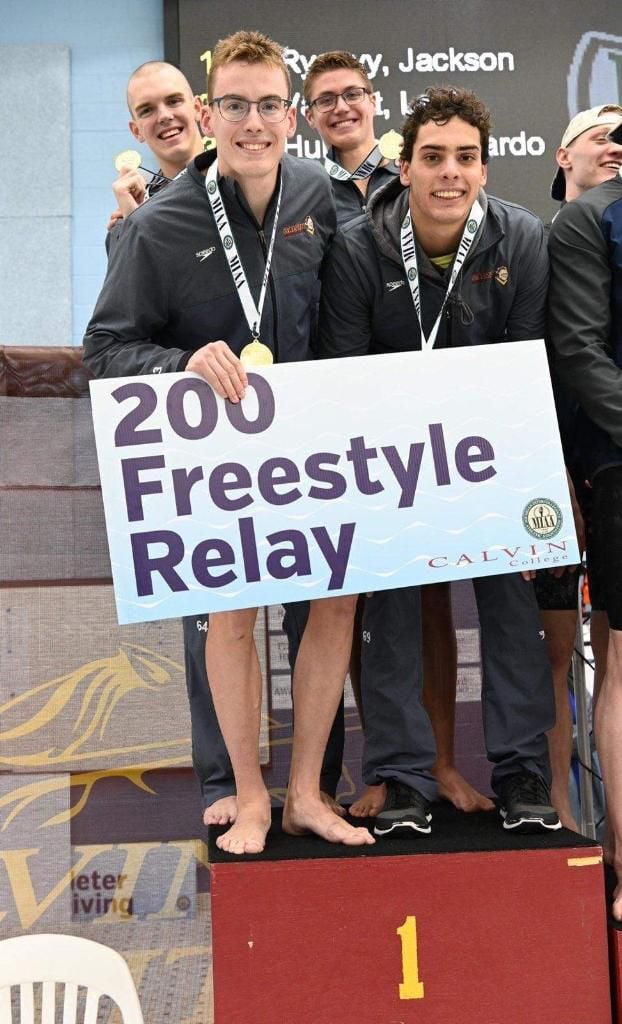 Sam Norman (front left) poses with his relay team after qualifying for nationals.

Sam Norman reacts when he sees his relay team’s time after swimming the anchor leg of the 200 Yard Freesyle Relay.

Sam Norman (front left) poses with his relay team after qualifying for nationals.

This year has been a break out year in the pool for Fulton graduate Sam Norman.

Norman, who graduated in 2017 and swam for the Morrison swim team, continued his swim career at the collegiate level after high school. He decided to take his talents to Calvin University in Grand Rapids, Michigan.

As a junior swimmer for the Knights, he was one of eight who qualified for the NCAA Division III Swimming and Diving Championships.

Unfortunately, the national swim meet has since been cancelled along with other sporting events across the nation due to the new coronavirus (COVID-19). It doesn’t take away from the fact that he was the anchor leg on the 200 Freestyle Relay that qualified for a meet of that caliber. It also didn’t take away the school record they broke.

“The nationals meet that I qualified for was cancelled unfortunately, so that was a pretty significant let-down,” Norman said. “We were seeded 9th in the country for the 200 Free Relay when the meet was cancelled, and top 8 become All-American. It was a bummer we didn’t get a shot, but we didn’t graduate any seniors this year from that relay.”

With all the success he’s seeing in his junior season, it’s pretty ironic that Norman almost didn’t stick it out. His freshman year at Calvin was a lot. He was over five hours away from his small town and his family, surrounded by all new faces and responsibilities.

“I wasn’t even sure I wanted to continue after the first couple weeks,” Norman recalled. “It was all very overwhelming at first, but I stuck with it.”

By the end of his first season, he had seen improvements in his time but not enough to make the top 16 who would score at the MIAA Conference meet. The same thing happened as a sophomore.

Then, he was qualifying for nationals.

“Junior year was the big year for me,” Norman said. “I was more committed to the sport than I ever had before, and I dropped a significant amount of time. Not only was I in the top 16 that scored at the end of the year, I was also an integral part of multiple relays.”

Norman went to Calvin originally because of the atmosphere he sensed. Coming from a small school and small community, it was important to move into one that fostered the same values and mentalities.

“I decided to swim at Calvin because of the team atmosphere and the way that Calvin’s swimming and diving team is really like a big family,” Norman said. “From the moment I stepped onto campus back in high school, I’ve felt welcome by everyone.”

Back when Norman was a swimmer for the Morrison Mustangs (Fulton co-op), that was one thing he gained from his time in the pool.

“I learned a lot about the importance of a close team, as a lot of my best friends from high school were on my swim teams,” Norman said. “I also learned about hard work from my coaches, who demanded nothing less.”

Although he’s in Grand Rapids now and a part of a collegiate swim team, he keeps those small-town, small-school values with him.

With all the success he’s been seeing, his favorite part of the sport continues to be his team.

“I know this is a common trend with these answers, but it really is an incredible closeness that we all share,” Norman said. “I have been invited to my head coach’s house for dinner multiple times, and it’s rare that there is a weekend in which swimmers aren’t hanging out together.”

Norman was an influence on his younger siblings, too. Sadie, Sara and Sydney Norman all swam for Morrison for the last four years, breaking their own records and leaving a mark on the Fillies’ program.

The distance hasn’t been an issue. His sisters and his parents are constantly supporting his endeavors in the pool.

Although they won’t be able to cheer him on at the national meet this year, they still have his senior season to look forward to.

“My family has always supported me in the pool, and part of me believes that it was because of them coming to my last big meet for the entire four days that I was able to swim like I did,” Norman said. :I am very appreciative to them not only for this year, but the way that they have always been my No. 1 supporters.”

Joan C. Naftzger, 92 passed away January 19, 2021 in Morton, Illinois. Graveside services will be 11:00 am, Saturday, May 15 at Lusk Cemetery in Albany, Illinois. Snell-Zornig Funeral Homes & Crematory is assisting the family.