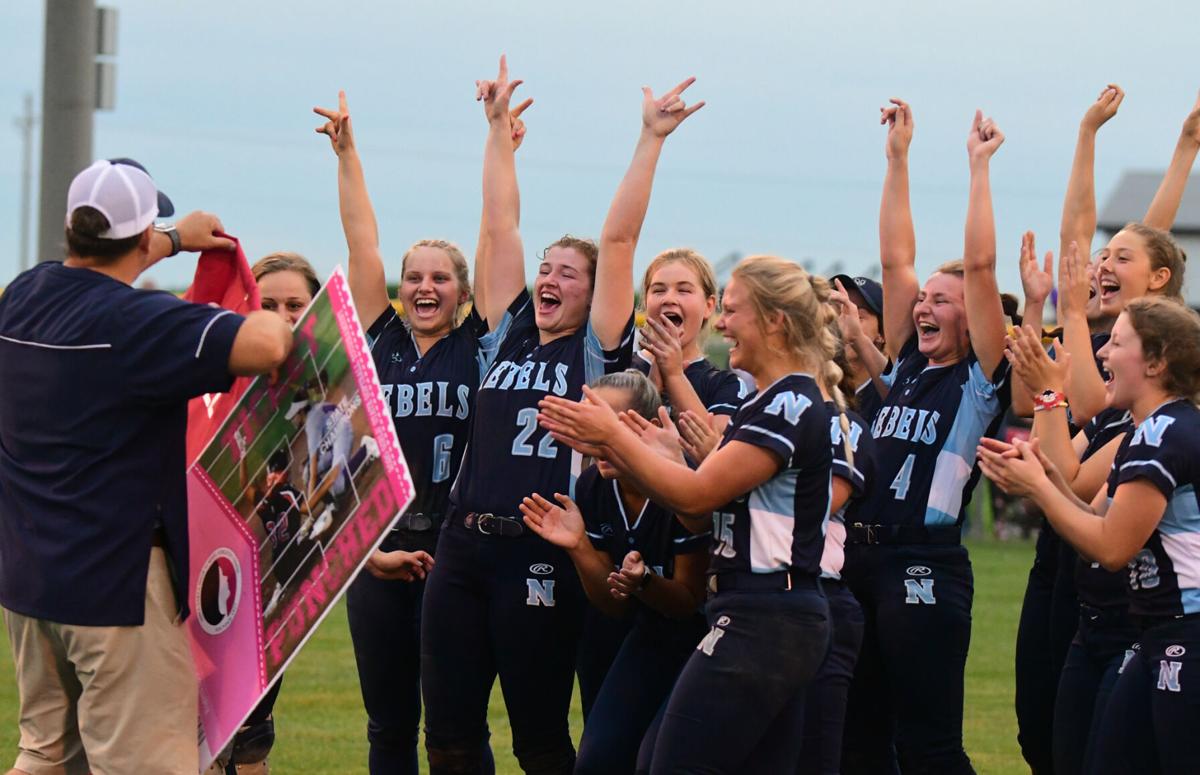 The Northeast girls softball team cheers as they wait for the state ticket and banner presentation from Northeast athletic director Troy Hansen after the Rebels beat Regina 2-1 on Monday night to clinch at state berth. 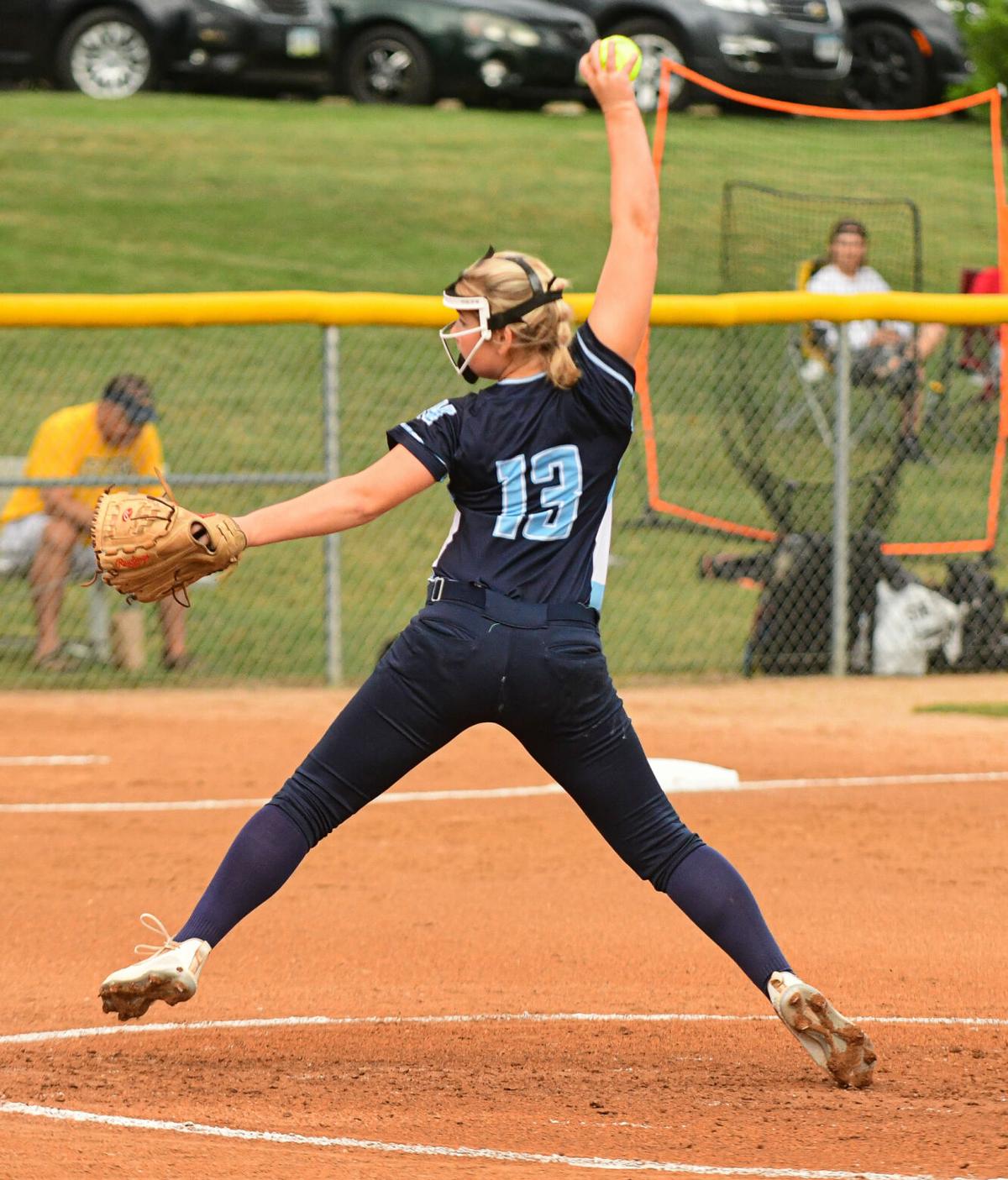 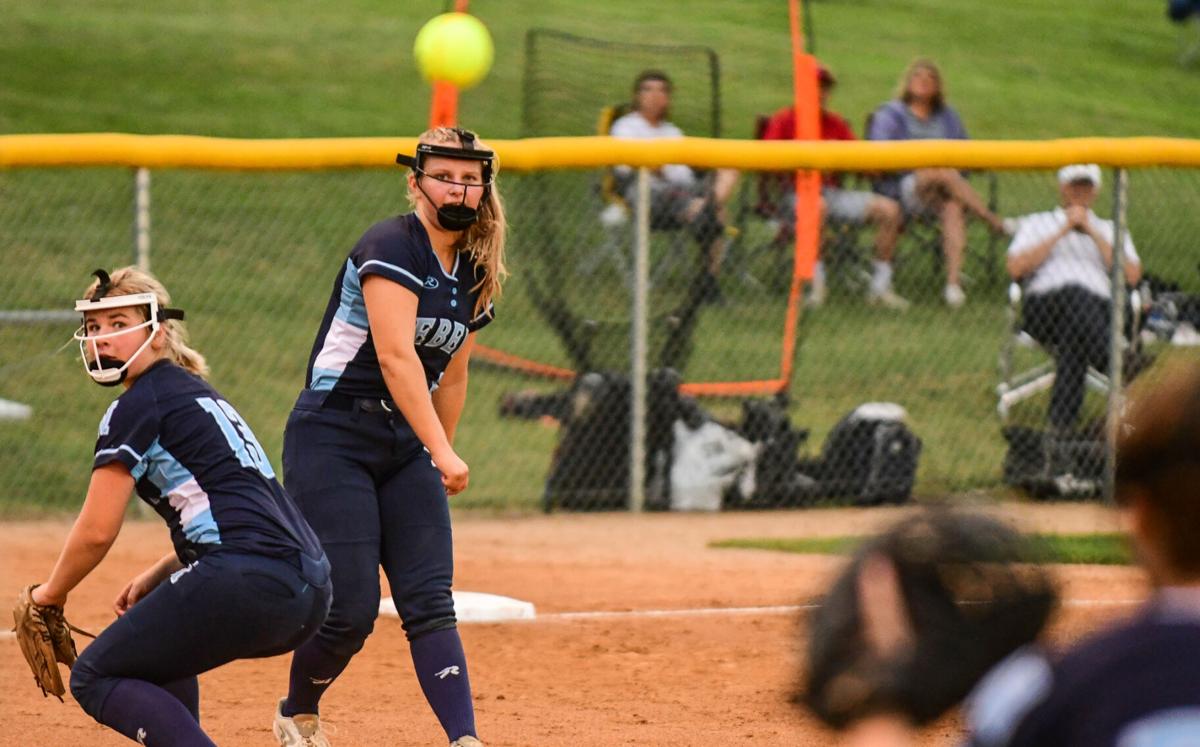 Northeast’s Valerie Spooner mades a throw from third base to first for an out during the Rebels’ 2-1 win over Regina Monday. 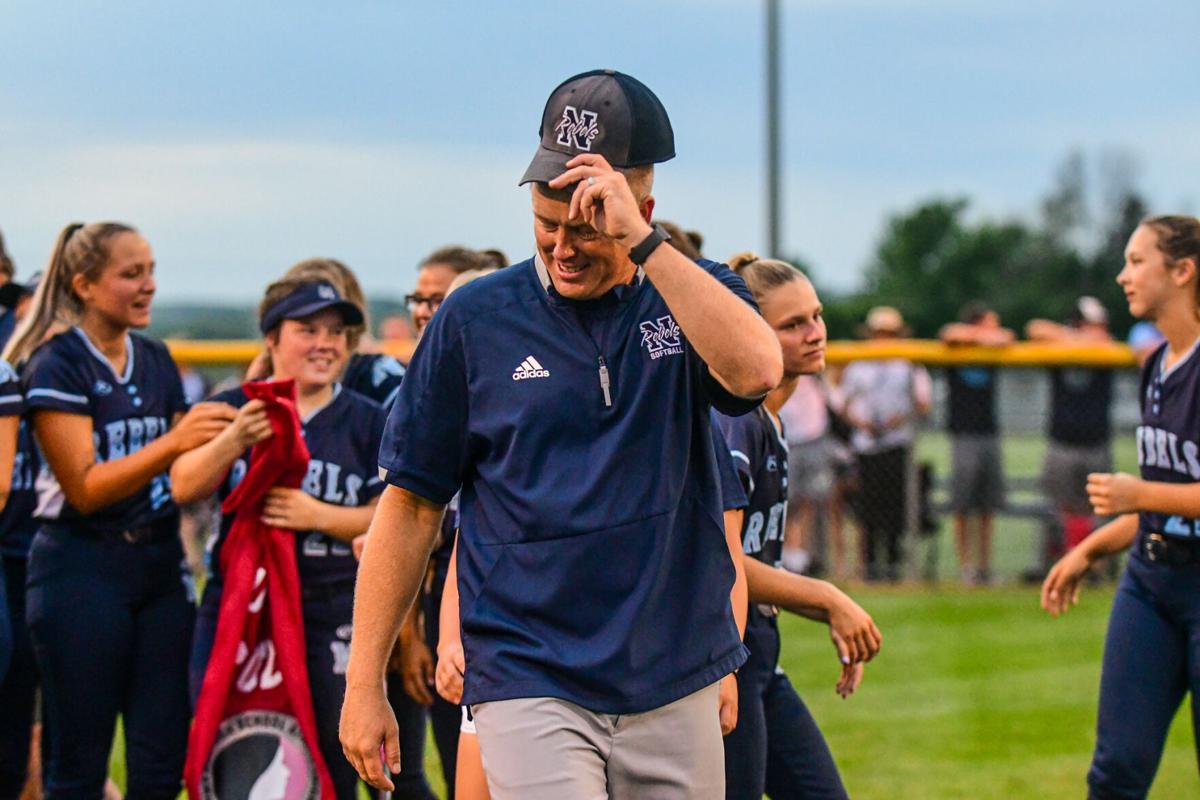 Northeast head coach Travis Eversmeyer walks away from where his team in celebrating after the Rebels clinched a state spot on Monday night at home.

The Northeast girls softball team cheers as they wait for the state ticket and banner presentation from Northeast athletic director Troy Hansen after the Rebels beat Regina 2-1 on Monday night to clinch at state berth.

Northeast’s Valerie Spooner mades a throw from third base to first for an out during the Rebels’ 2-1 win over Regina Monday.

Northeast head coach Travis Eversmeyer walks away from where his team in celebrating after the Rebels clinched a state spot on Monday night at home.

With one out to go to a state berth, senior catcher Bree Mangelsen made her way to the pitcher’s circle. Her pitcher, eighth grader Madison Kluever, had thrown two balls in a row and the Rebels had just a one-run lead.

What did she say? She asked the underclassman pitcher what pitch she wanted to throw.

“With her being an eighth grader, maybe never being in the position,” Mangelsen said. “I just know that she knows what she’s comfortable throwing. When she knows she can throw it, she’ll put it there. We talked all game about it and how we’re going to pitch our hitters.”

Kluever had one answer: change up

“That’s my best pitch and I’m very confident with that pitch,” Kluever said. “[I was thinking] let them hit it the whole inning, don’t try to strike everybody out. I have a great defense behind me.”

Kluever threw a strike and sent the last Regina batter to the pines looking, and with that out the Northeast softball team beat Iowa City Regina 2-1 and clinched the program’s first ever state berth.

“Holding on to that ball was unreal,” Mangelsen said afterwards. “It’s unreal of her to be that confident and to just put it there.”

In fact, it was the first state berth for a girls’ program at Northeast High School outside of track/cross country and they got to do it in front of a home crowd in Goose Lake. It was their 11th straight victory.

“Solid defense, great pitching and one big hit,” head coach Travis Eversmeyer said. “We thought we could hit her a little better than we did tonight, but our defense really came to play tonight.”

The Regals and the Rebels had met earlier this year, with the Rebels coming out on top with an 8-5 win. They knew it was going to be a tough matchup for them, but they stayed confident in their young arm. Kluever has pitched all but one contest this season for the Rebels.

She ended with eight strikeouts on the night.

The Regals actually scored first. Two quick hits in the first moved in one run, but some quick throws from right field to home and back to second base got the Rebels out of the inning with just a one-run deficit.

Some hard hit balls off the Northeast bats were snagged, and the Rebels didn’t plate a run in the first.

However, Alexis Ehlers started off the second inning with a single. Kluever, seventh in the batting lineup, helped her own cause with a towering home run to score two and give the Rebels the lead.

“She crushed that ball,” Eversmeyer said. “She made one mistake and Maddie made her pay for it.”

Northeast didn’t put any more runs on the board despite five hits, leaving four runners stranded. A lot of early swings sent deep fly balls into the outfield, but they were pulled in by Regal gloves. The only other times the Rebels scored two runs or less was in their two losses this season (Anamosa, North Scott).

“We had to play this game a little different,” Mangelsen said. “It was a pitching duel tonight.

“We were all excited to attack the ball. I think we all, just mentally knew we were on her, they just weren’t falling, and in time they’d come.”

The quiet offense didn’t matter with a defense that looked as sharp as ever. Quick grabs, first-base stretches, smart throws and no fielding errors kept the Regals quiet after the first. Add on Kluever’s pitching performance, and the final six innings were shutout innings at the hands of the blue and gray.

“They’re so good,” Kluever said about her infield. “I’m never worried if they hit it at all.”

The fans, which filled the outfield fence in Goose Lake on Monday night, stayed around as the teary-eyed Rebels made their way to the outfield for the banner presentation.

“To have everything ripped away from them school wise at the end of the year,” Eversmeyer said. “It’s even more sweet for them right now. Credit goes to them, they took a young pitcher under their wing, and found ways. I’m so proud of them.”

The Rebels (19-2) are headed out to Fort Dodge for the state softball tournament next week. The tournament begins July 27. Watch the Clinton Herald for more information as play draws near.