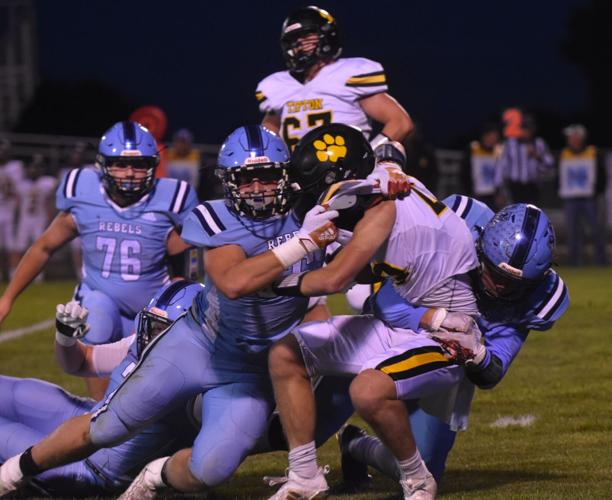 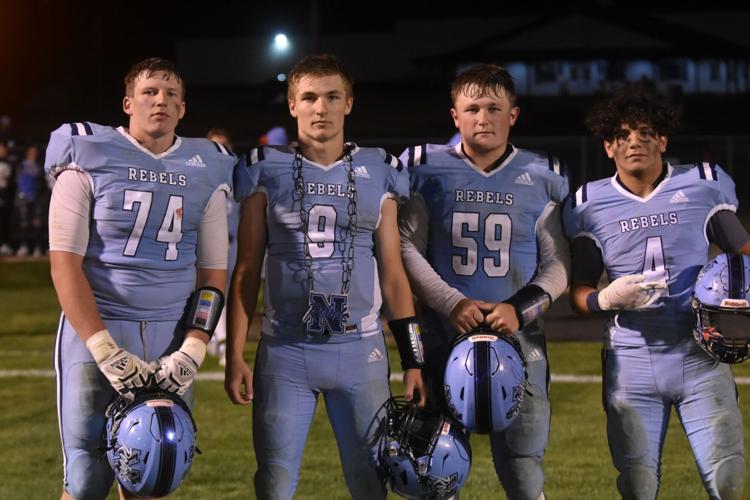 GOOSE LAKE – The Rebels came from behind to stun the Tigers on homecoming 28-26.

It was quite the game as the Rebels offense was able to wakeup late in the fourth quarter and pull off a big time win on homecoming night.

”We have a bunch of dudes and we came together at the end to get it done” Senior quarterback Gavin Kramer said.

The Rebels opened things up with a bang, scoring on the very first play of the game. Grant Gray got the sneaky kickoff return for the Rebels and he had a gap and did not miss it. He was able to cross the goal line and give Northeast an 8-0 lead just seven seconds into the game.

However, the Tigers did not take long to respond, moving the football with ease. The Rebels could not stop the Tigers run offense. The Tigers quarterback Ian Spangler broke free for a 25 yard touchdown run to put them on the board.

The Rebels were having trouble moving the ball offensively. Quarterback Gavin Kramer rolled out to his right on third down and was picked off by Caden Schmidt.

The turnover did not seem to hurt the Rebels as their defense was able to step up. They forced a turnover on downs around the midfield mark.

The Tigers defense did not let up as they were giving the Rebels all they could handle. The Rebels went for it on fourth down but were unable to get the right yardage and they gave the ball back to Tipton.

The Tigers found their stride as they began to march down the field with their run game. Junior running back Landon Holub gave them the lead as he punched it in from two yards. The Rebels blocked the extra point and the Tigers held a five point lead, 13-8.

The Tigers got the ball back and continued to run the ball. Tackling was an issue for the Rebels all first half and it continued late in the second quarter. Holub once again found the endzone, this time on a four yard run. Their two point conversion was no good and it became a 19-8 game.

Before the half, Kramer threw his second interception of the half on a deep out route. The Rebels entered the half down 11.

After allowing a nine yard gain to begin the half, the Rebels defense stepped up, forcing a turnover on downs.

The offense began to get something going as well, converting a fourth down and one. Immediately after, the Rebels turned what looked like a broken play into a 12 yard gain. Sophomore Grant Gray ran 14 yards for the touchdown. The Rebels converted the two point conversion and were right back in it down 19-16.

The Tigers answered right away, driving the ball and connecting on a 26 yard pass to Preston Daedlow. Tigers extend their lead 26-16.

Each team had to punt the ball on their next drives as neither offense was able to get much going.

Once again the Rebels could not get their offense moving and they had to punt the ball to the Tigers to end the third quarter.

On their next drive, the Rebels were able to move the ball through the air a little bit. 19 yard touchdown pass from Kramer to James Weispfenning. The two point conversion was no good for the Rebels and they found themselves down 26-22 with 5:44 to go in the fourth quarter.

A huge strip tackle forced the Tiger runner to fumble and the Rebels Kramer recovered the ball at their own 12 yard line.

Kramer is picked off by Caden Schmidt and the Tigers get the ball back with 3:12 to go. This is his third interception of the game.

The Rebels got the ball once more late in the fourth quarter and Kramer made the most of it. He scrambled out of the pocket for multiple big time first downs. He sprinkled in some passing and they found themselves with a first and goal from the four.

Kramer ran it in on the first play from the four yard line and they took the lead 28-26. They held up defensively and got the win 28-26.

”We just knew we needed to get it done. For some reason we let teams stay in it and we get down on each other. We came together at the end. It’s homecoming and we can’t lose on homecoming.” Kramer said.