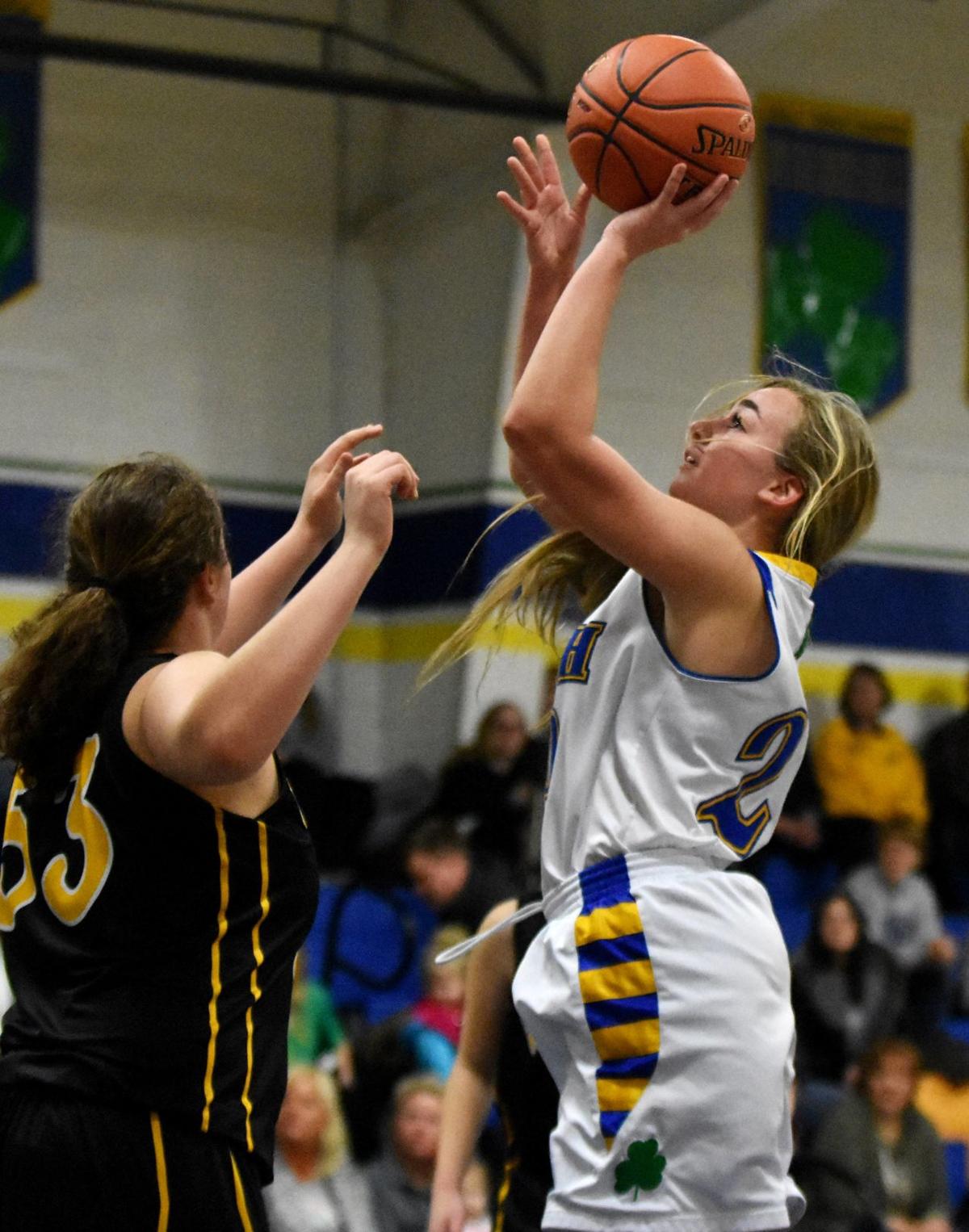 Prince of Peace junior Anabel Blount puts up a jump shot, one of her 30 points on Friday night. The Irish cruised to a 72-36 victory over Edgewood-Colesburg. 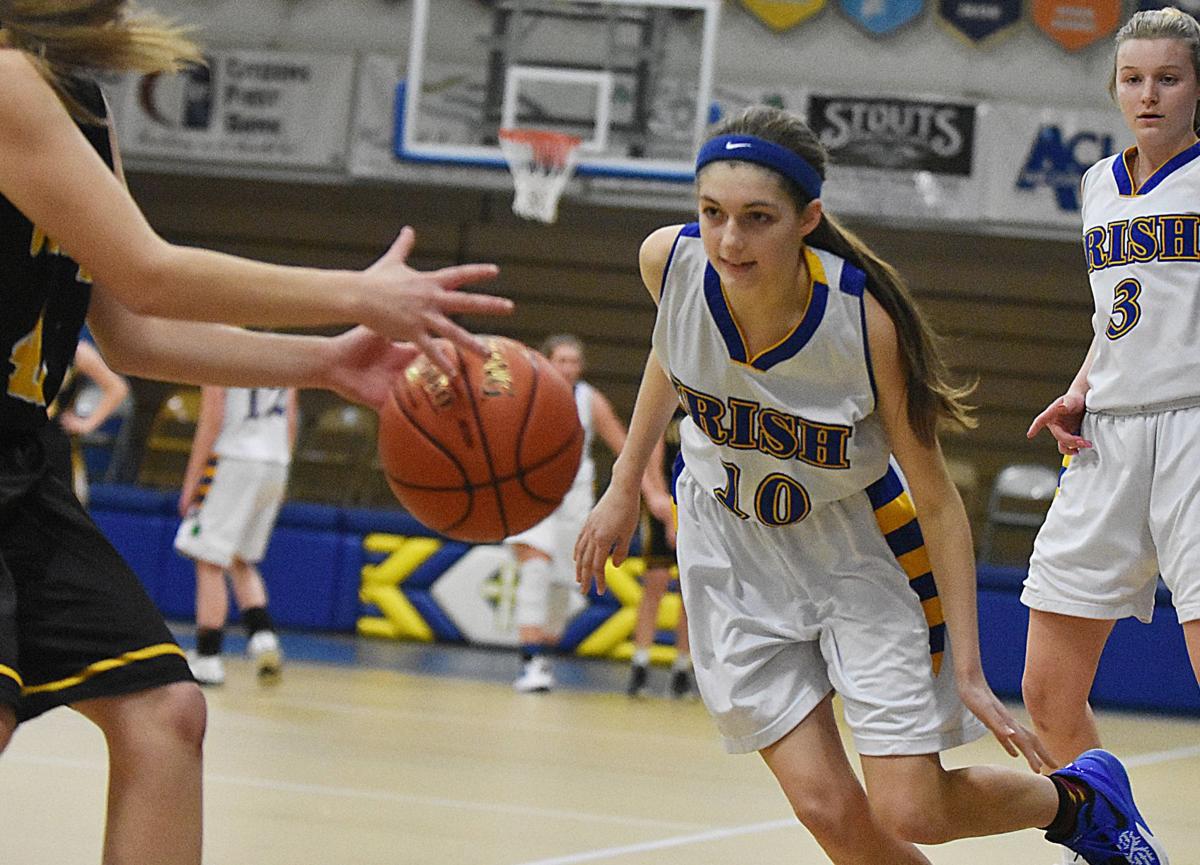 Prince of Peace junior Sophie Griffin dives for a pass in the back court during the Irish’s win over Ed-Co. 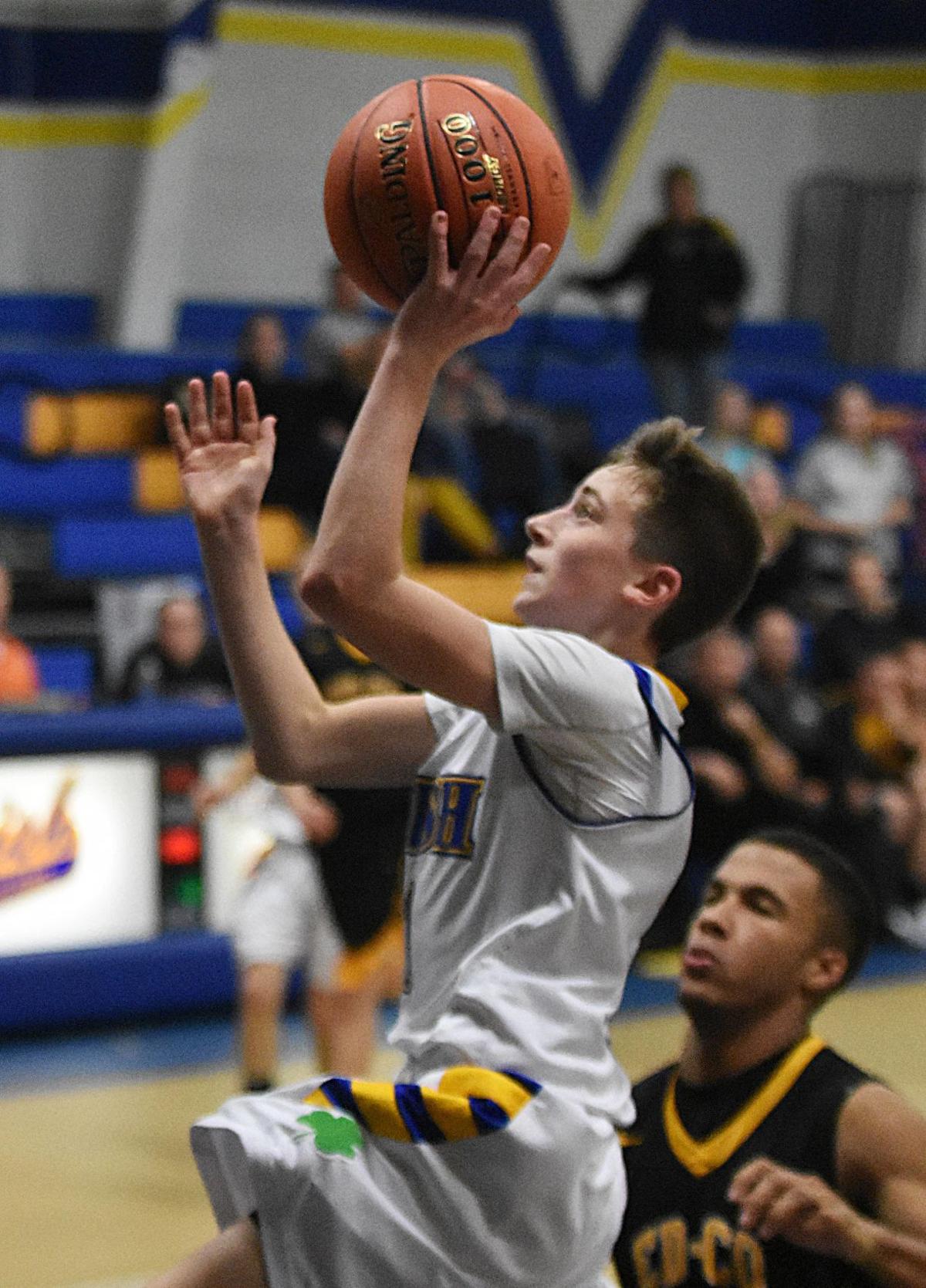 Prince of Peace’s Marcus Blount shoots the game tying layup for the Irish in their eventual overtime loss to Edgewood-Colesburg on Friday night, 50-49. 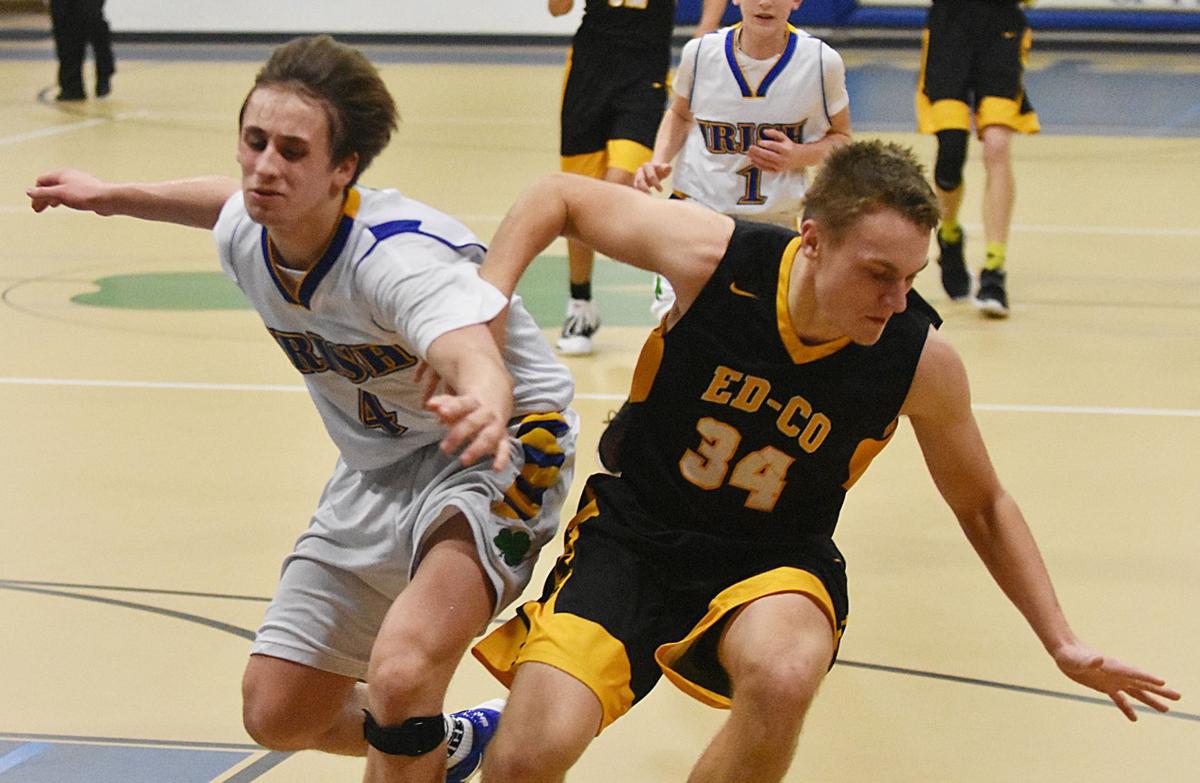 Prince of Peace’s Kyler Wallace fights for a ball on a play that would eventually send him to the bench with five fouls on Friday night.

Prince of Peace junior Anabel Blount puts up a jump shot, one of her 30 points on Friday night. The Irish cruised to a 72-36 victory over Edgewood-Colesburg.

Prince of Peace junior Sophie Griffin dives for a pass in the back court during the Irish’s win over Ed-Co.

Prince of Peace’s Marcus Blount shoots the game tying layup for the Irish in their eventual overtime loss to Edgewood-Colesburg on Friday night, 50-49.

Prince of Peace’s Kyler Wallace fights for a ball on a play that would eventually send him to the bench with five fouls on Friday night.

The Prince of Peace girls pulled out a big win after losing two in a row, defeating the Vikings 72-36.

“It was a fun, get up and down the court game,” head coach David Nelson said. “Our offense certainly came from our press tonight. This is really the second game this year that we have been able to pull together both sides of the ball. I hope it continues.”

They lost significantly to Class 2A No. 2 North Linn but only lost by five to No. 13 Maquoketa Valley. Either way, they were still feeling the sting of those consecutive losses when the Vikings stepped onto the court on Friday night.

They came out with an aggressive start, Lilly Isenhour getting the jump and then immediately getting a pass in the lane, which she drove up through defense to drive the foul.

After making a free throw, Anabel Blount stole the ball in the backcourt and turned that into a bucket, the first of her nine quarter points and an impressive 30 points in the game.

In fact, they didn’t let the Vikings score until two minutes into the game and by then had gotten a solid head start. By the end of the quarter, they had a 23-13 lead.

They didn’t stop there. They went on a 10-0 run in the first three minutes of the second quarter to extend. that point difference to a comfortable 20 points.

The Irish defended the Vikings aggressively, especially in the first half, consistently putting some kind of pressure on them in the backcourt.

Better yet, they filled in their positions when the ball got down the floor, not letting Ed-Co beat the press down the floor or to the hoop. Lilly Isenhour was impressive in the middle for them with multiple blocked shots whole guards like Isabel Hansen, Paige Kuehl, Kaelyn Goodsman and Sophie Griffin put pressure on fullcourt.

Prince of Peace improves to 3-2 on the year.

The boys had an entirely different game, ending in a heartbreaking 50-49 loss at the hands of the Vikings.

“A really heartbreaking loss,” head coach Gerry Murphy said. “How important were some of our role players tonight. They played hard and were able to finish, still a tough loss.”

Fouls proved to be the downfall of the Irish, who are still looking for their first regular season win despite recording two, 1-point games now.

The Irish led by two points after a highly-defensive first half. They came out running in the third quarter, extending that to a nine-point lead.

Then fouls started getting in the way. With Nathan Moeller, the Irish’s normal leading scorer, on the bench with four fouls, it was a different looking lineup on the court.

They were getting the job done. New faces like freshman Marcus Blount were putting in crucial buckets to maintain that lead.

Still, the Vikings weren’t going anywhere. With 5:47 left to play, they pulled within three points. Kyler Wallace then committed a bad foul in the backcourt, sending him to the pines with four and sending the Vikings to the line in the bonus, cutting the lead to just one.

Almost as soon as Wallace came back to the floor he exited again, recording his fifth personal foul. With these free throws, the Vikings took their first lead of the half.

Down three, Nathan Moeller came back to the court and put up a shot. Pulling down his own rebound not once, but twice, he tipped in a bucket.

The Irish still were trailing by two with time ticking. This time, it was the freshman with the heroics. Marcus Blount drove baseline, his 5-06 frame easing up the shot to knot the game up 41-41. The defense held the Vikings from there.

That sent the game to overtime. The Irish struck first with a point from a Gage Ruden freethrow and then a fastbreak pass from Moeller to Blount, giving them the three point lead.

The next time down the floor, Moeller was called for a foul on a questionable play, notching his fifth of the night and sending the second starter to the bench for the Irish. Ed-Co tied everything up with 2:15 left to play.

The Irish took the lead again with consecutive freethrows byt Blount, but then Ed-Co finished a couple of drives, giving them the 50-48 advantage with just 13.6 seconds left.

The Irish struggled to find a hole the perimeter, but CamRon Williams eventually did, putting up shot right before the buzzer. It didn’t land, but he went to the line with two shots.

He managed one free throw, but couldn’t get the other to fall, leaving the Irish one point short of their first win.

Blount ended with 12 points, one of the team-highs. Kyler Wallace also had 12, while CamRon Williams put in 10.

Both varsity squads are back in action next Tuesday, going on the road to Springville.