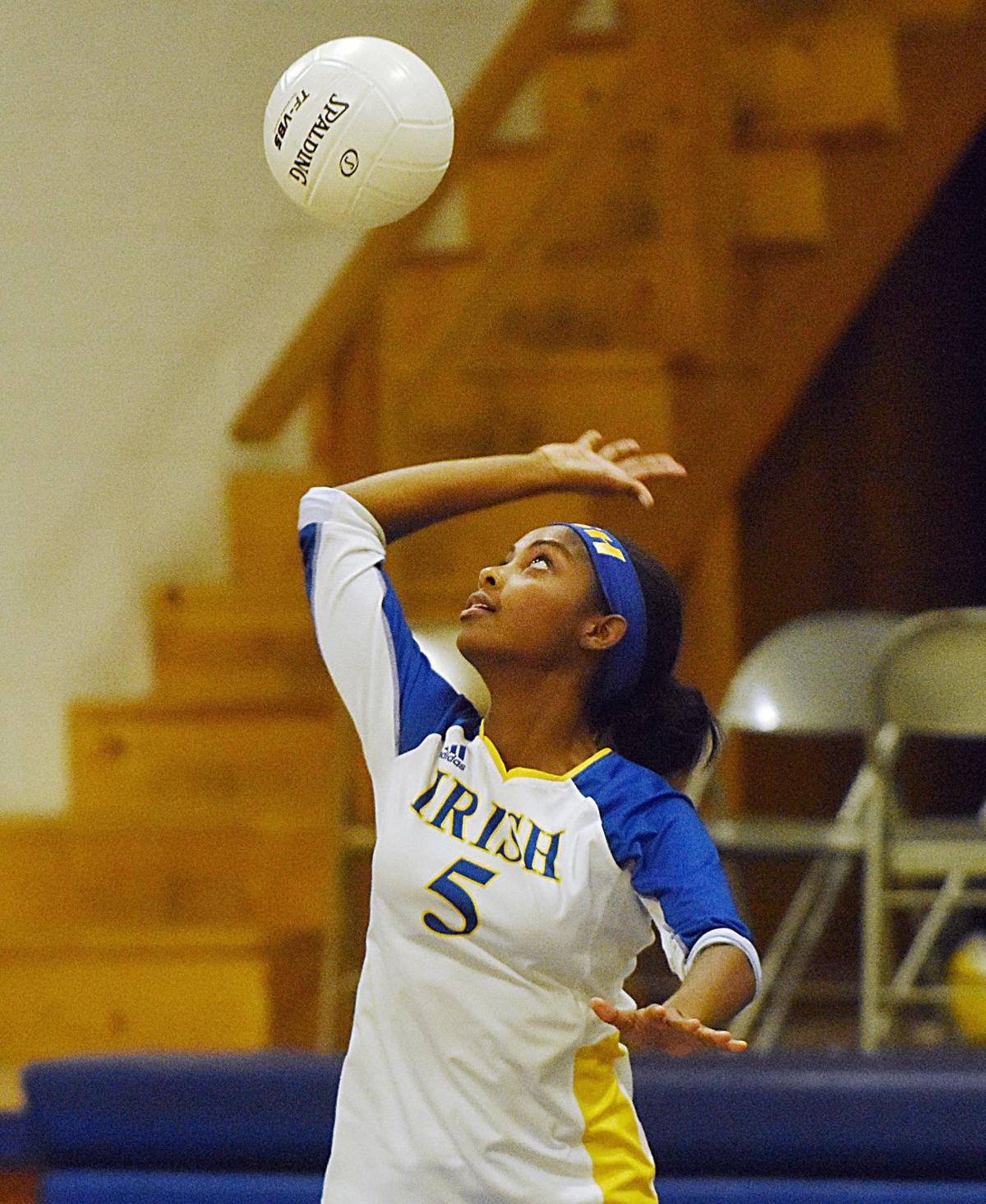 Prince of Peace freshman Nyah Thomas serves a ball during the Irish’s postseason win over Marquette on Tuesday night at home. 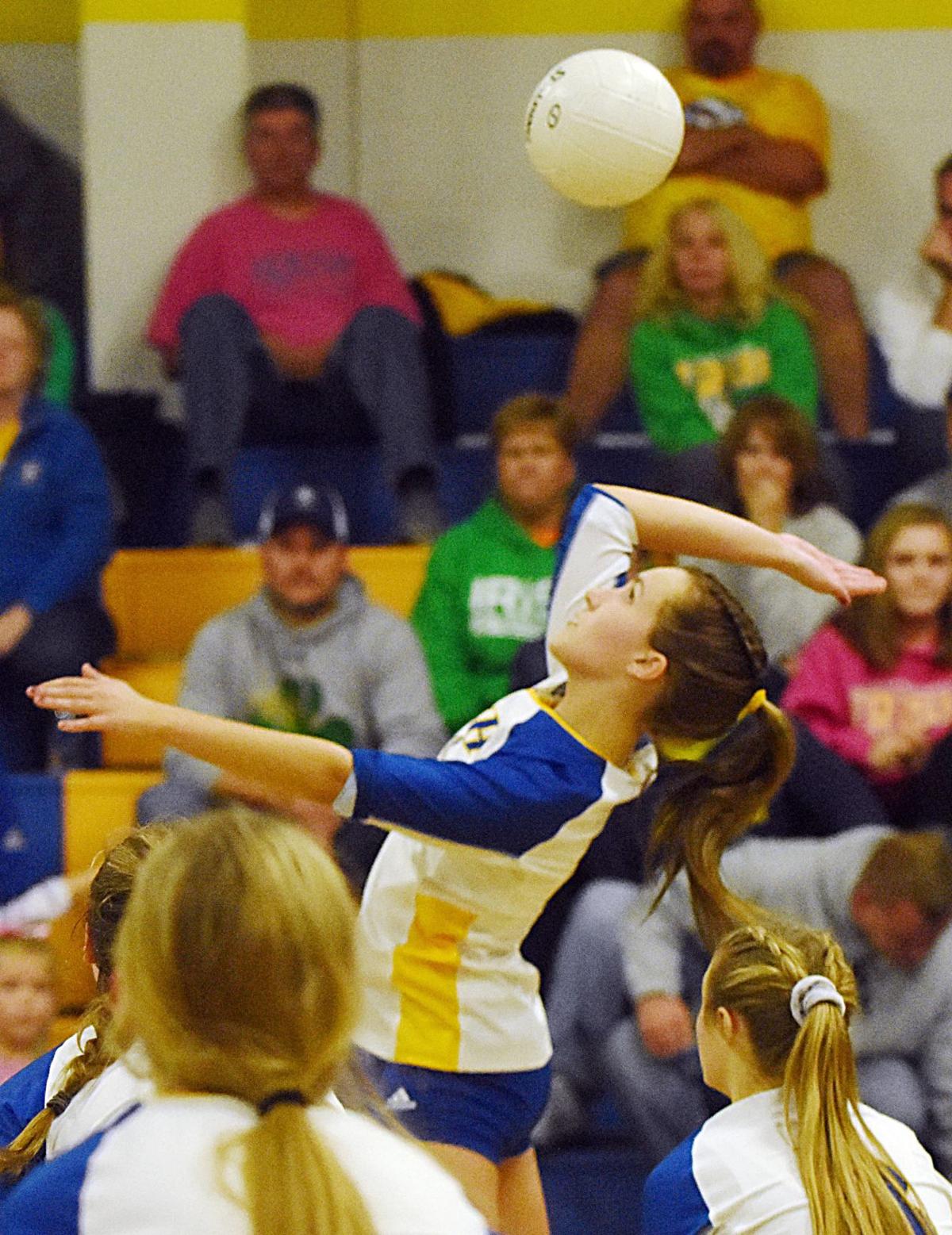 Prince of Peace junior Grace Dehner swings at a ball during regionals on Tuesday night in Clinton.

Prince of Peace freshman Nyah Thomas serves a ball during the Irish’s postseason win over Marquette on Tuesday night at home.

Prince of Peace junior Grace Dehner swings at a ball during regionals on Tuesday night in Clinton.

CLINTON – The Prince of Peace Irish set the stage for a local rematch after winning the first round of regional volleyball on Tuesday night at the Joe O’Donnell Sports Center with a 3-0 sweep over Tri-Rivers Conference foe Marquette Catholic.

The Irish handled the Mohawks in just an hour. This sends them to the regional quarterfinals, where they will see Easton Valley in The Joe once again. This will be the two’s third meeting in as many weeks.

“I would definitely say there was caution because you can’t look past anyone,” head coach Stacie Kenneavy said. “We didn’t want to overlook them by any means because on any given night people can come ready to play but I feel like we came ready to play.

The Irish put 27 kills away in the three quick sets, including a team-high from Anabel Blount. Lilly Isenhour had five and Sarah Moeller four.

“We were aggressive,” Kenneavy said. “We had a lot of swings and a lot less pushing. We didn’t send over a lot of free balls.”

They also served up eight aces, Blount serving two of those and both Grace Dehner and Paige Kuehl serving two a piece.

Even with the wide scoring margins, the Irish had shaky moments. Kenneavy wants to see more consistency, especially as they continue through the postseason.

“We started out really strong in the first set,” Kenneavy said. “Then we started to make some errors and play not as clean. The second set we talked about having a complete game from start to finish and again we had some wobble.”

The Irish now look towards Easton Valley, who has a lot of tools coming into their first postseason game. One of the things the Irish are focused on is blocking: both hitting against a big block and blocking some powerful hitters.

“It’s coverage because we know they have a block,” Kenneavy said. “We need to stay low on defense and get our own blockers to reach for that back line.

“I think if we keep doing what we’ve been doing on serve receive that can only help. We just need to work more on our coverage and blocking.”

The game is slated for Monday night at the Joe O’Donnell Sports Center in Clinton. The winner of that game will most likely face No. 7 Lisbon, another TRC team, in the regional semifinals.

BELLEVUE – The Northeast Rebels battled and ultimately fell on Tuesday night in the first round of the 2019 postseason, unable to post a win in their regionals loss to Bellevue.

The Rebels had faced the Comets multiple times throughout the regular season before Tuesday night, each contest going back and forth.

It was the first year under head coach Jacob Schaefer, who said earlier in the season that it was going to be a process to change the culture.

He also said earlier that the Rebels were “getting it”, the results would come as that continued.