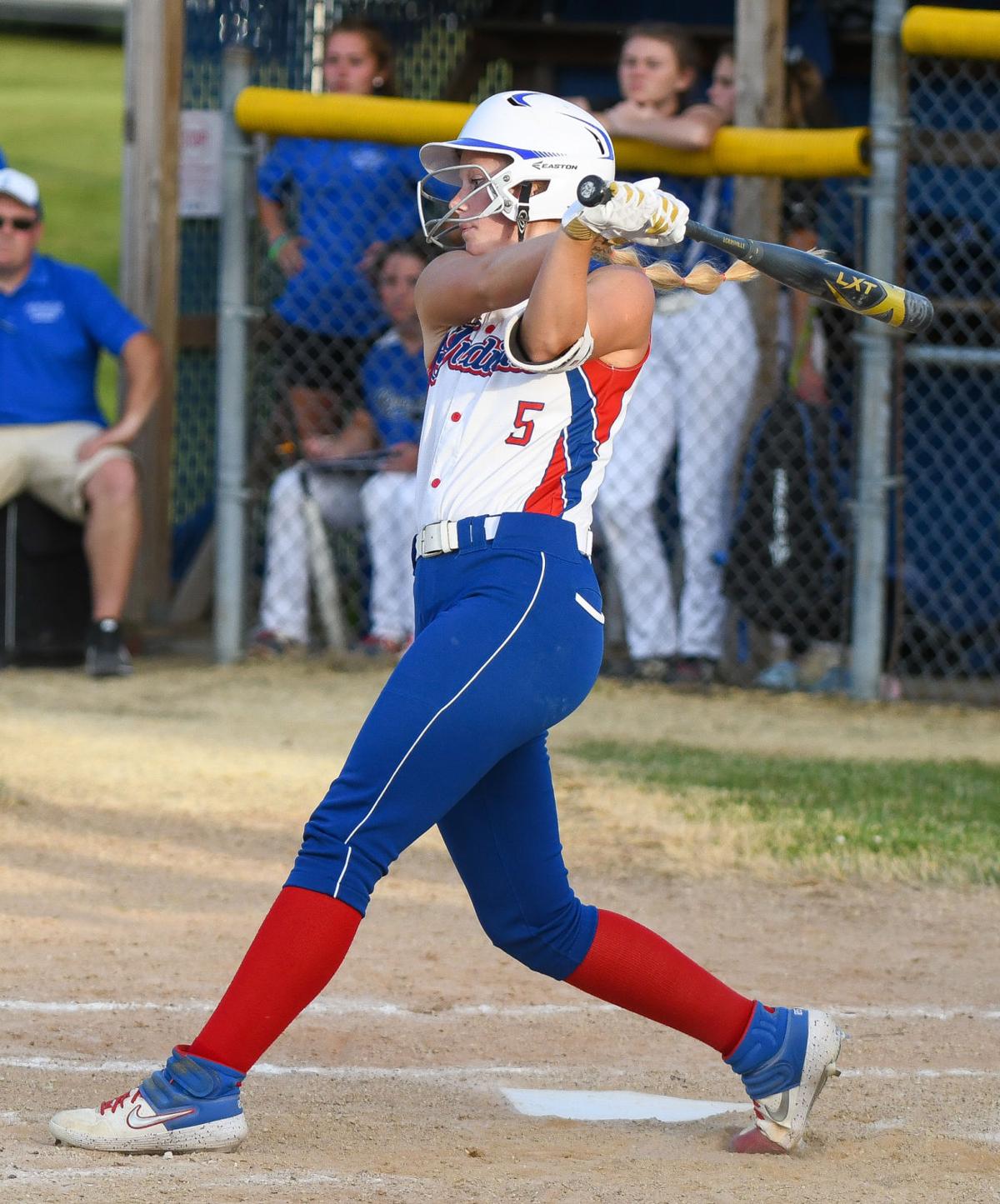 Camanche senior Tarah Wehde swings at a pitch during the Indians' 7-2 loss to Anamosa on Monday. 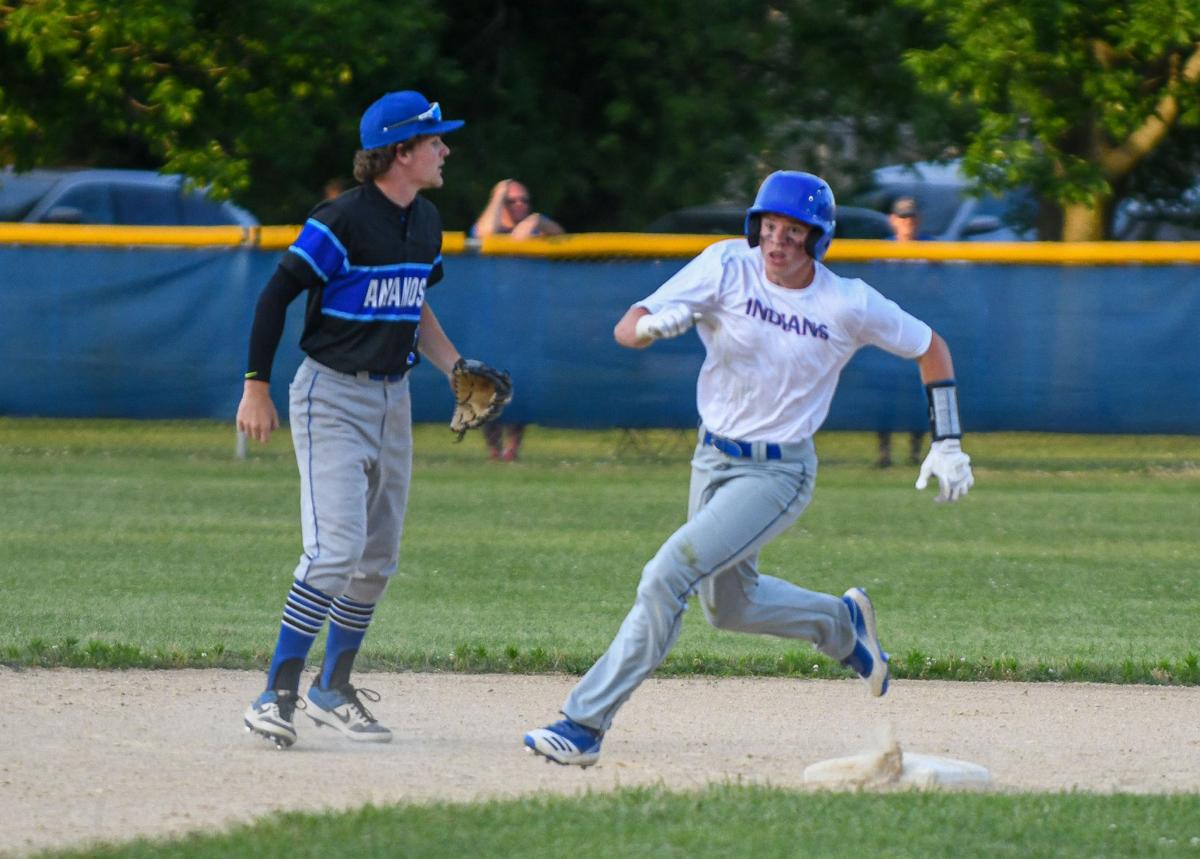 Camanche's Tucker Dickherber rounds second base during the Indians' game against Anamosa at home on Monday night.

Camanche senior Tarah Wehde swings at a pitch during the Indians' 7-2 loss to Anamosa on Monday.

Camanche's Tucker Dickherber rounds second base during the Indians' game against Anamosa at home on Monday night.

CAMANCHE – The Camanche softball team had a tough River Valley matchup to kick off their season and saw it end in a 7-2 loss to No. 4 ranked Anamosa on Monday night.

“We lost a hard fought game,” head coach Andrew Carbajal said. “I am really proud of my girls.”

The Indians held the raiders through the fourth inning, striking first with an RBI double from Abby Beal.

That’s when the Blue Raiders got their offense rolling, scoring five in the top of the fifth.

The Indians scored their second run in the seventh after a leadoff single from Tarah Wehde.

Wehde also pitched for Camanche, recording 10 strikeouts on the night.

“Anamosa is a very solid and disciplined program,” Carbajal said. “Our youth showed tonight and we need to work on our psychological game and know that anyone can hit. I also need to step my game up and get the girls ready for Thursday and Friday.”

The Indians (0-1) welcome Cascade to their home field on Thursday before heading to Goose Lake to see local and conference foe Northeast, who has the No. 13 slot in Class 2A.

DEWITT – The No. 2 Sabers kicked off the season with a battle of heavy weights, welcoming No. 6 Marion to the diamond. They took the 7-2 victory in both halves of the WaMaC doubleheader.

In Game 1, the Saber struck first. They managed to come out with the first two runs.

Marion evened everything up in the fourth, but the No. 2 team in the state broke out for five runs in the fifth inning to solidify their first win.

In Game 2, Central DeWitt scored two runs right off the bat, and continued that trend through the first half of the game. They took as much as a 5-0 lead before Marion pushed a run across the scoreboard.

Luke Anderson went 3-for-3 for the Sabers, driving in four runs in the process. Anderson also pitched through the sixth inning before being relieve by Boomer Johnson.

DeWitt (2-0) heads to Davenport Central High School on Wednesday for a doubleheader.

No. 13 Northeast impresses in opener

WELLMAN – The Rebels proved that they belong in the preseason rankings on Monday night, downing Mid-Prairie 11-0 to kick off the season.

Madison Kluever impressed for the Rebels from the circle, pitching six innings and allowing just one hit the entire night.

The Rebels were an offensive powerhouse, led by a 4-for-4 night from senior Bree Mangelsen. Neveah Hildebrandt, Makenna McDonald and Audrey Morris all had two RBIs on the night.

The Rebels (1-0) return to action on Wednesday, traveling to Calamus-Wheatland for a 7 p.m. first pitch.

WELLMAN -The Northeast baseball team was shut out on Monday night, falling 10-0 to the Mid-Prairie Golden Hawks on the road in five innings.

The Rebels (0-1) head to Calamus-Wheatland next, taking on the Warriors on Wednesday night.

The River Hawks led by nine by the time the third inning was done in the first game.

The River Hawks (2-0) play again this Thursday, heading to Edgewood-Colesburg for a Tri-Rivers Conference game.

ELDRIDGE – The Clinton River Kings split with North Scott on Monday, taking one win and one loss from their first Mississippi Athletic Conference doubleheader.

Clinton had a lead, but watching North Scott score four runs in the seventh inning to beat the River Kings 10-9.