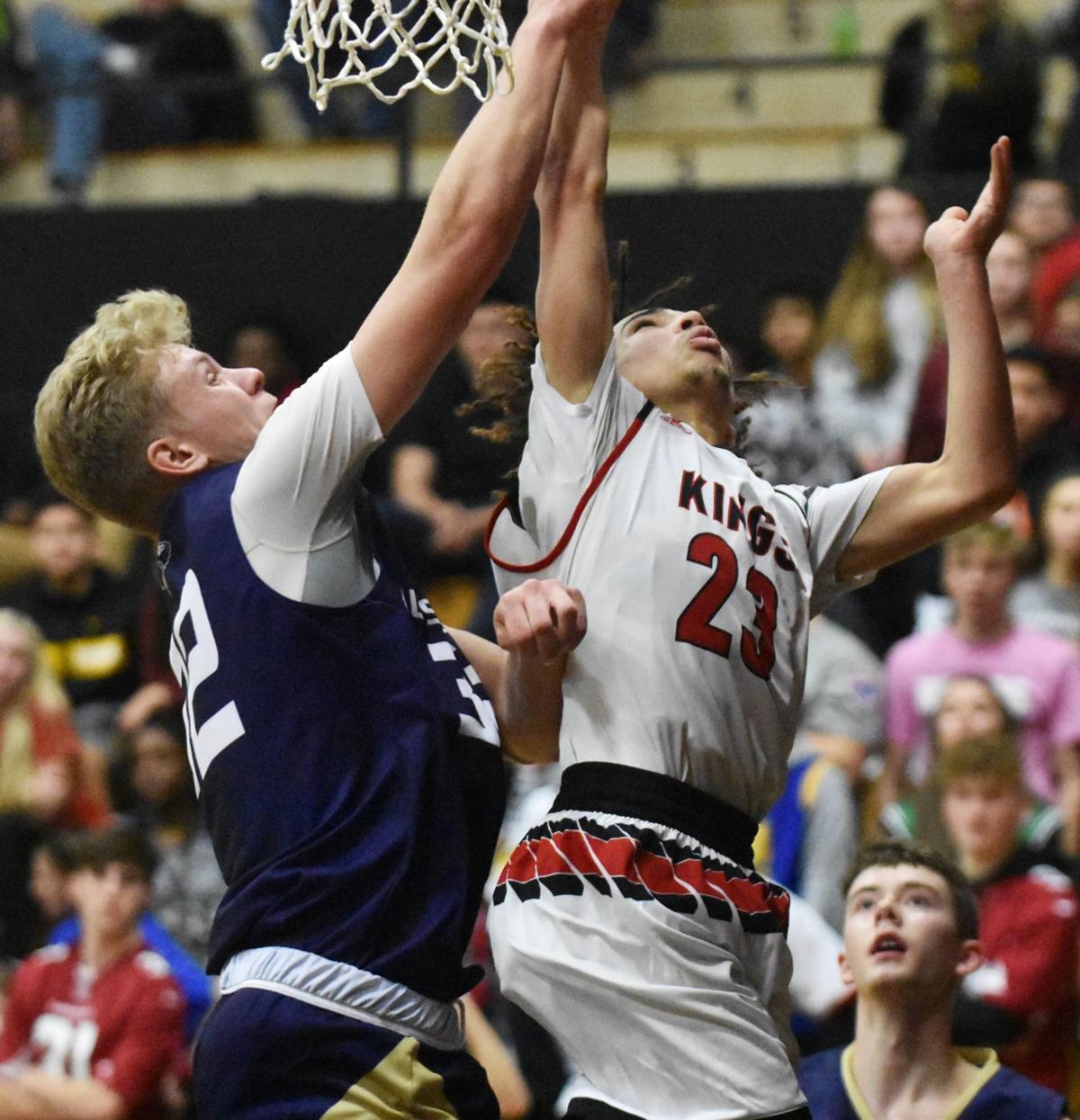 In this file photo from a Clinton home game, Clinton’s Taylon Hayes shoots against Muscatine defense. 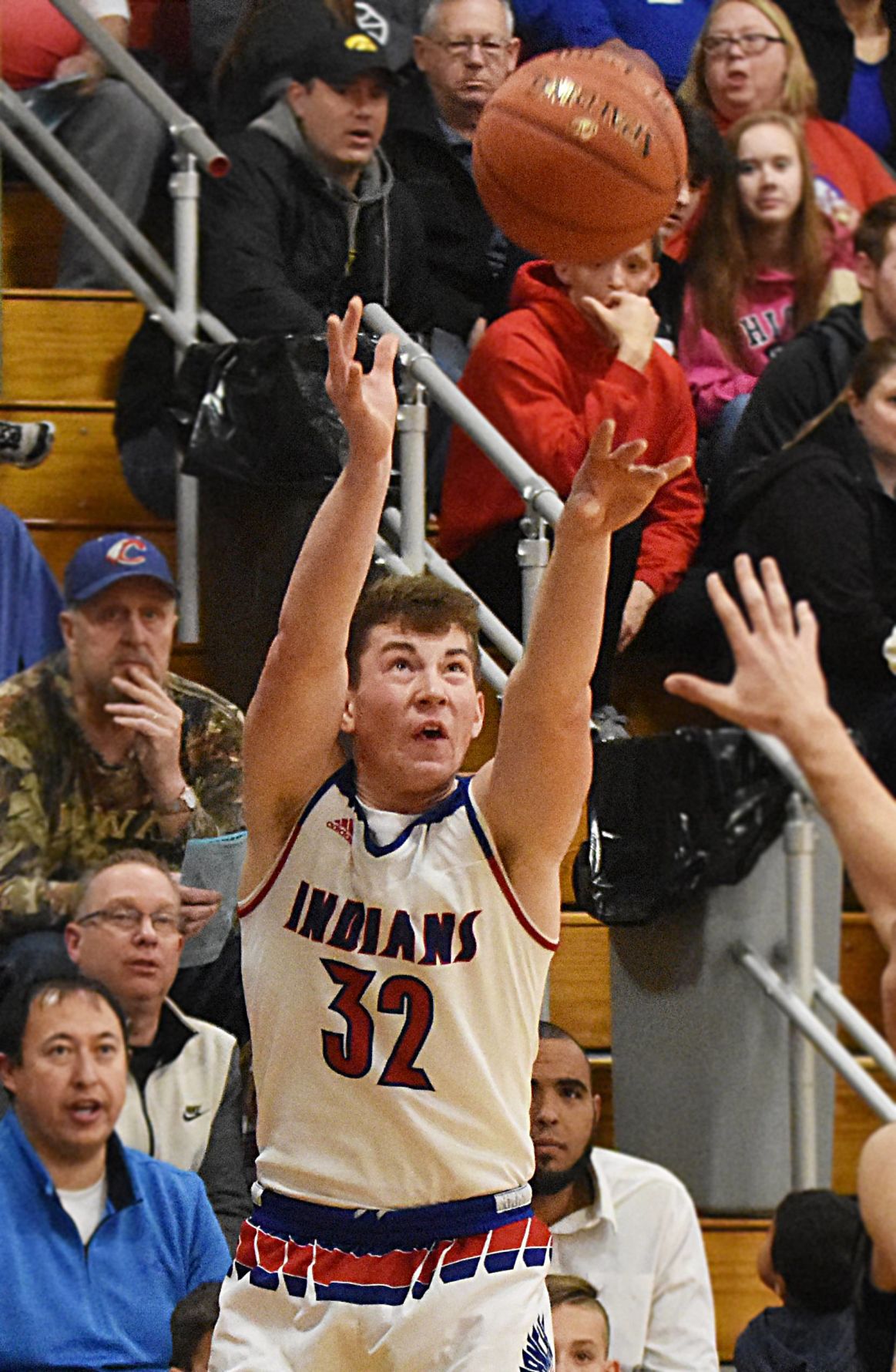 Camanche’s Mike Delzell shoots a three during his first game back with the Indians on Friday night. Camanche edged Regina 57-55.

In this file photo from a Clinton home game, Clinton’s Taylon Hayes shoots against Muscatine defense.

Camanche’s Mike Delzell shoots a three during his first game back with the Indians on Friday night. Camanche edged Regina 57-55.

Where was that rhythm the other 31 minutes?

“I don’t know,” Clinton coach Troy Ersland said after absorbing a 76-35 Mississippi Athletic Conference loss to Davenport Central at George Marshall Gym. “We were (really) tentative. We didn’t respond well to their pressure.”

Facing a pressure-packed defense that offered little opportunity for open looks, the River Kings never established an offensive consistency. Outside the third-quarter spree, points were something Clinton (1-3, 1-1 MAC) struggled getting.

“We were just tentative” said Ersland, who received 13 points from Treveon Bailey and 11 more from Damarcus Knox. “We were in our own heads. We know what we have to do, but we still have guys that as soon as they get a body on them, they stop. We’ve just got to learn to play through that.”

In their first conference road contest, the River Kings were unable to do that.

“We have a lot of guys who are playing their first year of varsity, so I think inexperience is part of it” Ersland said. “This gym can be intimidating, especially when Central has a good team like they do this year. Maybe it was nerves and inexperience, but that can’t be an excuse.”

Central (2-2, 2-0) seized control early, using a 20-3 run that covered parts of the first and second quarters to build a 28-8 lead. At one point during that spree, the Blue Devils converted eight of their 12 shot attempts and did not commit a turnover.

Spearheading the start was Central senior forward Kaiden Phillips. In the first half, Phillips hit six of his nine shots from the field – making both of his 3-point attempts – and nailed four of his five free throws for 18 points. The defensive end was equally impressive, with Phillips blocking seven shots.

In constructing a 48-18 halftime advantage, the Blue Devils converted exactly half of their 34 shot attempts and committed three turnovers. Central also was efficient, scoring on 25 of its 35 possessions.

“We played together,” said Phillips, who finished with 22 points, nine rebounds and eight blocks. “Everybody scored and we moved the ball well. That’s really it.”

On the other end, the River Kings simply could not convert shots.

“I’d write a book if I knew why [we did not hit shots],” Ersland said. “I thought we were settling for 3s in the first quarter and we were attacking the rim in the second quarter. It was like there was a lid on the basket. That’s how it is.”

What makes the frigid shooting more puzzling is the fact Clinton had eight turnovers in the first half and 13 for the game. During the first half, it converted five of its 27 attempts from the field.

“They’re a lot more athletic than we are,” Ersland said. “They’re super talented. We were trying to stay in front of them, but we couldn’t. I thought we gave up a lot of opportunities to take charges and make it difficult on them. We just stepped out of the way.”

During the opening minutes of the second half, the River Kings stepped up.

Two baskets from Knox were sandwiched around a Bailey hoop less than two minutes into the third quarter. Clinton finally had an offensive stretch that featured strong possessions and converted shots.

The goal now is building upon that 60-second stretch.

“We bounced back in the second half,” Ersland said. “How are we going to respond on Monday in practice? Our guys did a good job the last time (after) we got blown out against (Dubuque) Hempstead. We’ll bounce back.”

CAMANCHE – The Indians hadn’t seen the Regina Catholic Regals since they knocked them out at the Class 2A substate game in Muscatine last year.

That one still stuck, but they erased it on Friday. They won a second half battle, scoring in the final ten seconds to take a 57-55 victory over the Regals.

It was the first game back for Mike Delzell, who was a big player in the win. LJ Henderson had the ball at the top of the key and took it in for the go-ahead bucket.

The Indians (3-0) travel with the girls’ team next Tuesday, taking on local foe Northeast.

The girls struggled against the Regals, 46-25.

Despite trailing 13-5 after the first half, the Indians managed to keep within single digits by the time halftime rolled around. Head coach Andrew Carbajal said the team “folded and were tired” as the Regals extended that lead in the second half.

The Indians (1-3) travel to Illinois on Monday to take on Riverdale. They return to conference play on Tuesday with Northeast.

Fulton really pulled away in the second quarter, holding the Mustangs to just five points and taking a 38-21 lead.

Conner Barnett and Kyler Pessman led the offense, Barnett putting up 20 and Pessman adding 19. Bradlee Damhoff also had a double-double.

INDEPENDENCE – Both DeWitt varsity teams had no issues in Independence on Friday night, taking the full varsity sweep.

With nine different Sabers putting up points, the No. 11 Central DeWitt girls’ team was able to roll to a 54-16 stomping of Independence.

Taylor Veach was the only player in double digits with 19. Allison Meadows had eight, and both Lauren Cooper and Grace Pierce had seven a piece.

The boys also won, led by three double digit performances that lifted them to a 67-44 victory ,also keeping them perfect.

Alex McAleer led with 13 points, while Henry Bloom put up 11 and Tucker Kinney another 10.

TIPTON – The Northeast girls moved their record back to .500 with a 61-43 win over Tipton on Friday night.

The post players were the difference makers for the Rebels with Emma Fowler putting in 17 and Claire Abbott 15. Alexis Ehlers also scored 13 points.

Four of Fowler’s points and seven of Abbott’s were from the foul line. The Rebels went 20-for-27 from the line.

The Lady Rebels (3-3) will welcome Camanche next Tuesday.

PRESTON – The Easton Valley boys took down Central City on Friday night 68-48, powered by a 23-point performance from Kaleb Cornilsen.

The River Hawks trailed 16-15 after the first eight minutes, but took the eight point lead by halftime. Cornilsen put up 14 in the second half to help them extend that lead.

CLINTON – The River Queens struggled to keep Davenport Central at bay the first half, eventually falling to the Mississippi Athletic Conference foe 61-30.

The River Queens were only able to put up nine points in the first half, falling behind early.