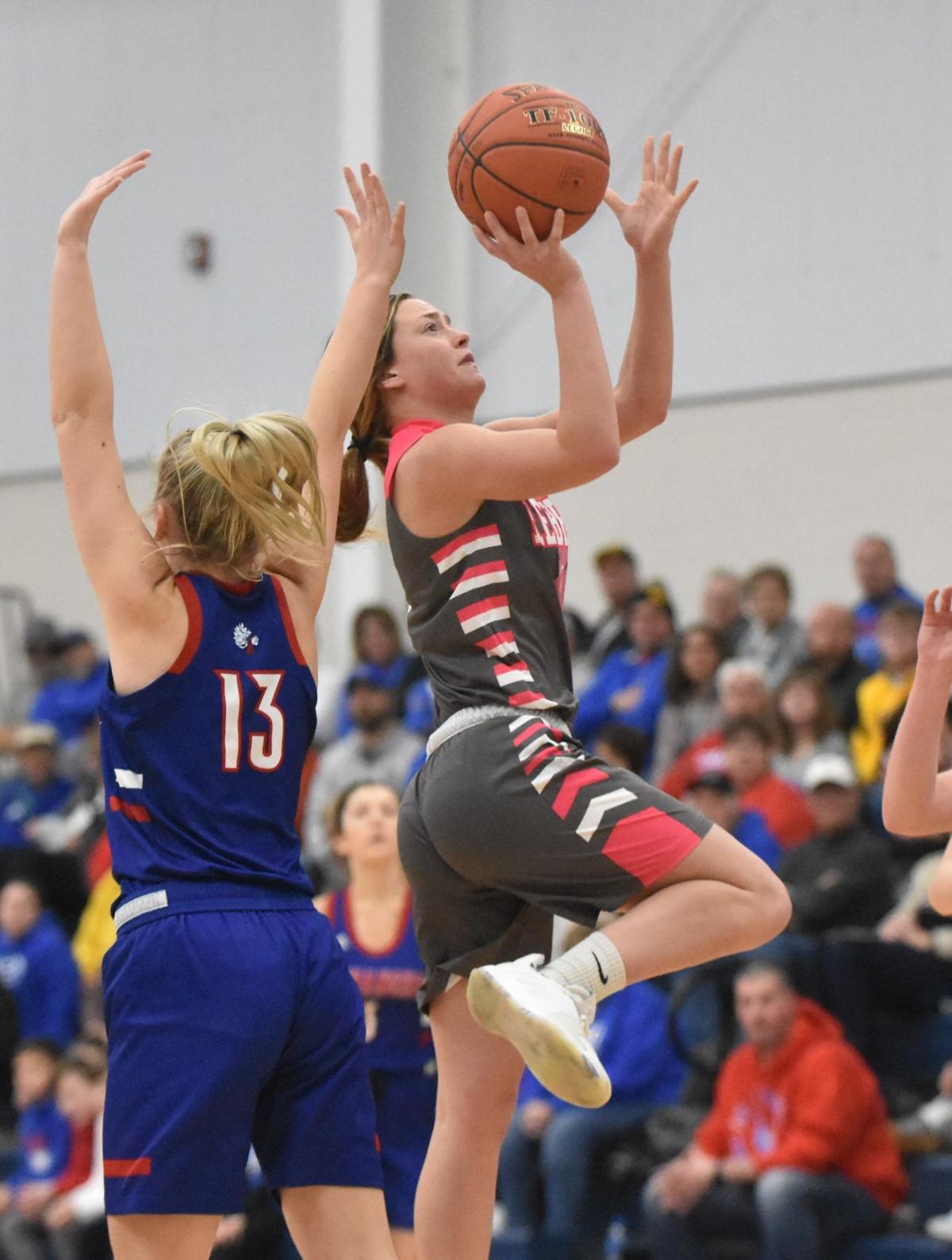 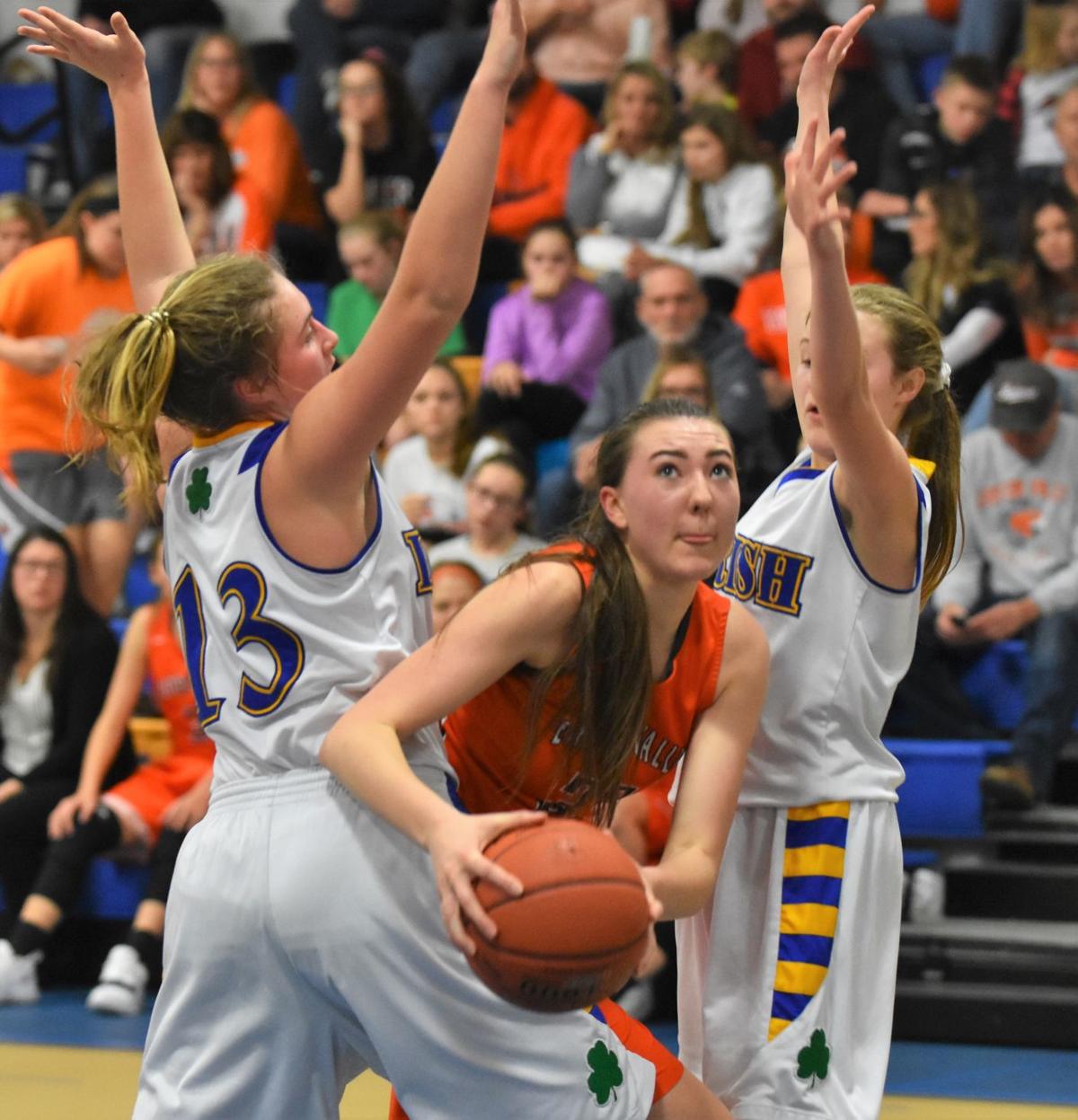 In this Herald file photo, Easton Valley’s RaeAnn Carlson pushes through Prince of Peace defense. Carlson had 21 points on Friday in the River Hawks’ win over Cedar Valley Christian.

In this Herald file photo, Easton Valley’s RaeAnn Carlson pushes through Prince of Peace defense. Carlson had 21 points on Friday in the River Hawks’ win over Cedar Valley Christian.

The Rebels led by just three points by the time halftime rolled around, but outscored Mid-Prairie 19-11 in the third quarter.

Emma Fowler, who impressed with 28 total points, had 20 in the second half. That included nailing three 3-point field goals.

The boys bounced back from their first and only two losses of the year with a win over Hawks as well, winning 51-38.

The Rebel boys improve to 6-2.

The Rebels have a quick turnaround, welcoming Wilton to their home court on Saturday afternoon for another River Valley Conference contest. The girls tip off at 1:30 p.m. with boys to follow.

SPRINGViLLE – RaeAnn Carlson’s double-double helped the River Hawks get back to winning ways in a dominant 56-17 vctory on the road at Cedar Valley Christian.

Carlson had 21 points on the night, pulling down 11 rebounds at the same time. She also had three blocks and five steals for the River Hawks.

The River Hawks held the Knights to just three points in both of the opening two quarters.

Sarah Driscoll scored another 11 and Sydney Stoll had nine.

The Easton Valley girls improve to 4-5.

The River Hawk boys stayed undefeated on the year with another dominant win over Cedar Valley Christian.

Jessen Weber led with 18 points, while Kaleb Cornilsen put in 16 – all in the first half. Both Hunter Holdgrafer and Nate Trenkamp had 13 a piece.

The River Hawks improve to 8-0.

The River Hawks play again on Tuesday, welcoming Tri-Rivers Conference and local foe Prince of Peace to their home court.

DYERSVILLE – Another double digit win for the Central DeWitt girls’ team in in the books after they downed Beckman Catholic 62-52 on Friday night.

The game was close for the first half of play, with the Sabers taking a four point lead into the half. They came out and held Backman to just seven points in the third quarter to extend their lead.

DeWitt boys down No. 1

DEWITT – The Central DeWitt boys may have gotten the statement win they needed to squeeze into the state rankings.

The Sabers welcome No. 1 Beckman Catholic to their home court on Friday night, their first contest out of the break. While the Blazers sit in the top spot in Class 2A, the Sabers haven’t yet garnered enough votes to make it into the standings.

However, the edged the Blazers 58-55 on Friday night for their first victory over a ranked opponent.

The Sabers (6-1) will travel next, heading to Center Point-Urbana on Tuesday.