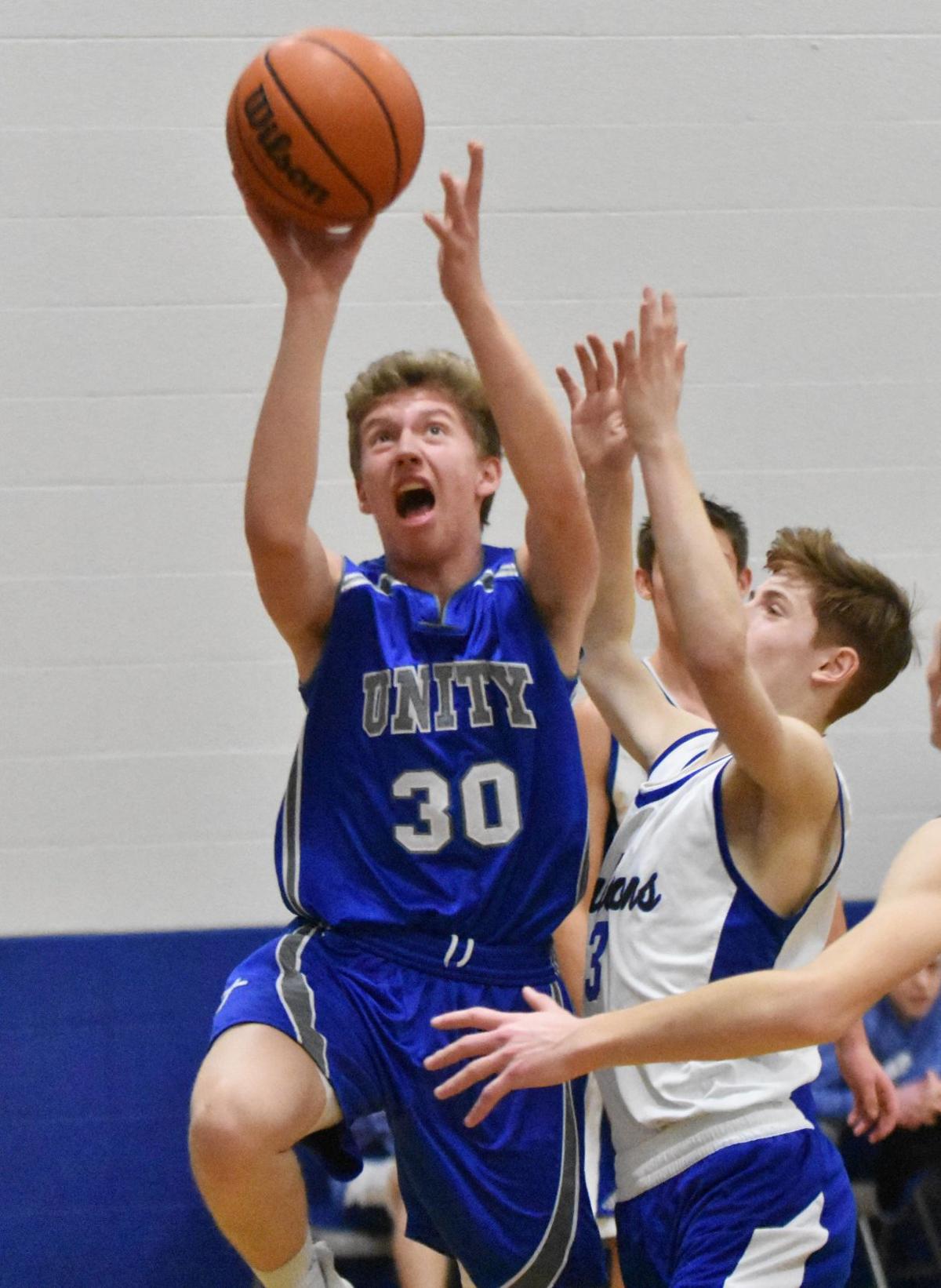 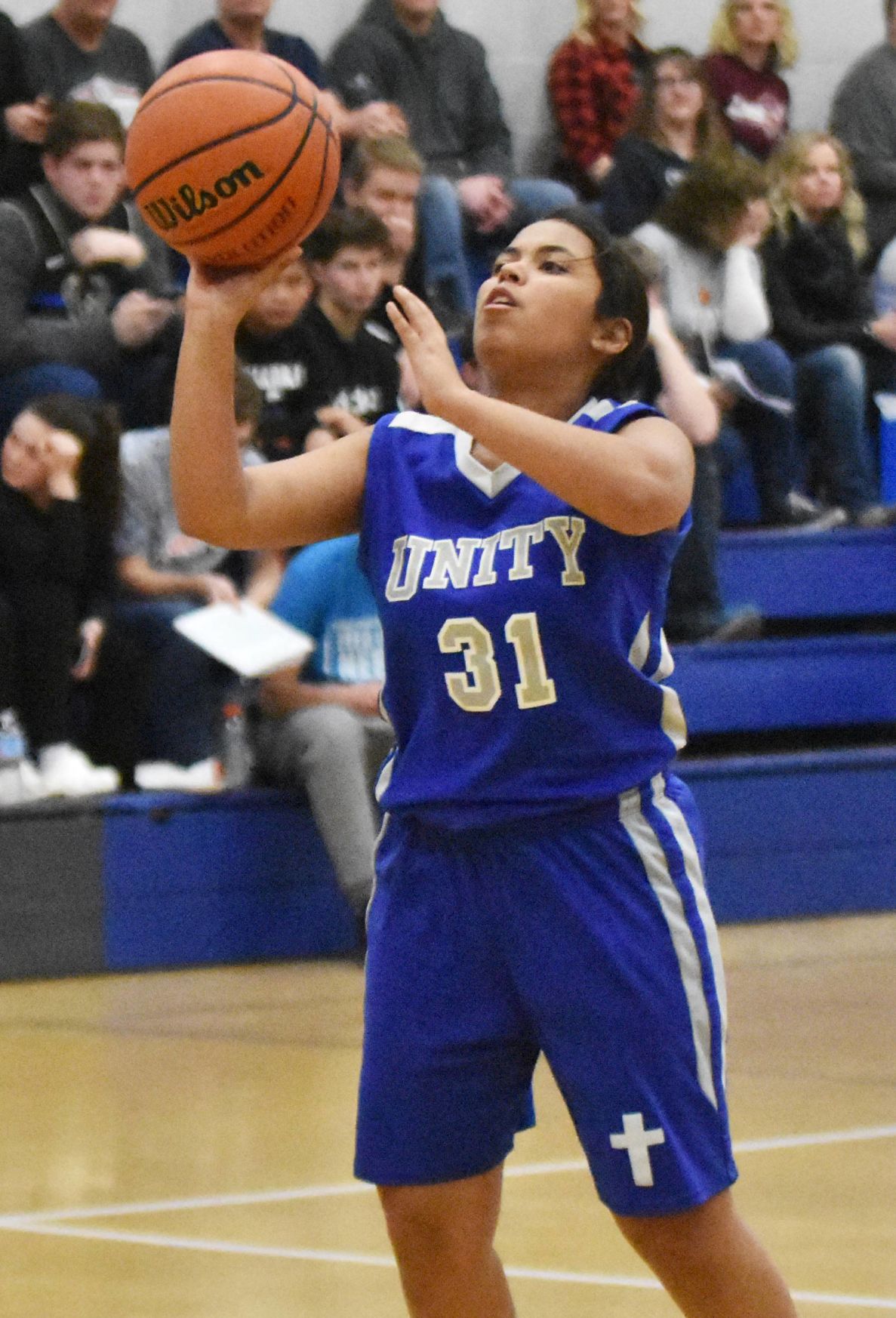 Unity Christian’s Sarah Freeman shoots from the top of the key during the Knight’s loss in the NICC Tournament on Friday in Dixon. 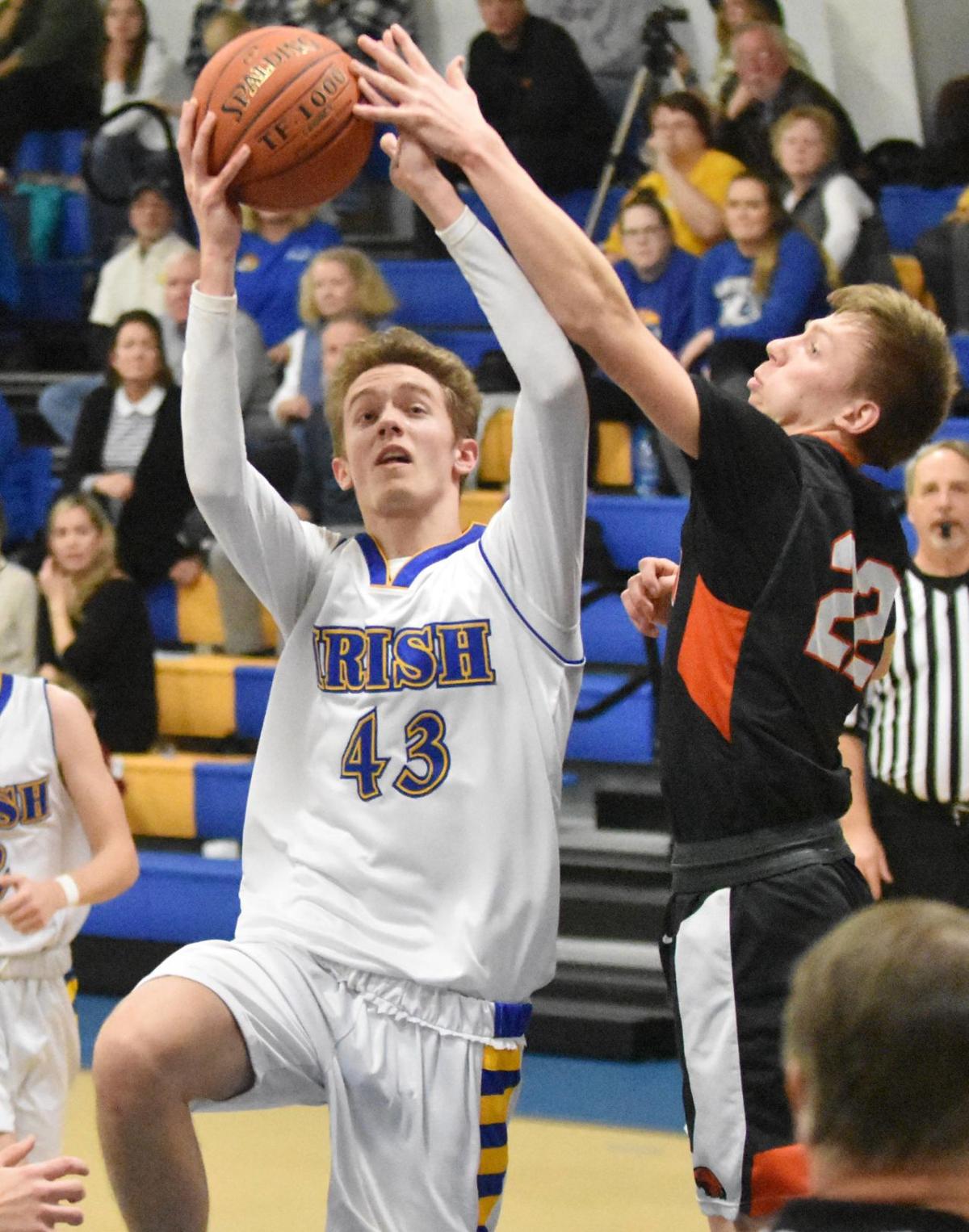 In this file photo, Prince of Peace senior Nathan Moeller shoots the ball during the Irish’s game against Easton Valley. The Irish took a homecoming win over Marquette on Friday night for homecoming.

Unity Christian’s Sarah Freeman shoots from the top of the key during the Knight’s loss in the NICC Tournament on Friday in Dixon.

In this file photo, Prince of Peace senior Nathan Moeller shoots the ball during the Irish’s game against Easton Valley. The Irish took a homecoming win over Marquette on Friday night for homecoming.

Unity bows out of NICC Tourney

The Unity boys couldn’t keep up with the size of the home team, Faith Christian, falling 64-42.

The Unity boys stayed with Faith in the first half, the likes of Ty Bickelhaupt and Andrew Appel driving the lane, and Weston Hintz hitting outside shots.

Eventually, Faith’s height got to the Knights. With a tall and experienced group of upperclassmen, the Knights struggled to control rebounds and defend in the lane.

A four-point second quarter certainly didn’t help the Knights, either.

Ty Bickelhaupt led with 11 points, while both Shawn Tegeler and Weston Hintz put up 10.

The very young Unity girls were plagued by turnovers in a 51-39 loss to Galesburg Christan to kick off the tournament.

Carrie Willoughby put up a jumper from the baseline and then Michelle Striley put in an offensive rebound to cut the lead to 13-10, but two straight turnovers sent the Lions up by seven by the time the first ended.

In the second half, the Lions’ Kate Potter was unstoppable, using both speed to drive the basket and an outside game to drain threes. Her buckets and assists helped the Lions jump up to a 26-12 lead just six minutes into the second half.

The Knights had nine turnovers in those first eight minutes, on their way to 39 total throughout the game.

Willoughby led the scoring effort with 18, while Michelle Striley put up 13.

The tournament continues Saturday morning, although both Unity squads are done with competition. The three point contest and conference awards are also handed out Saturday.

Irish can’t hold off No. 2 Mohawks

CLINTON – The Prince of Peace girls had the Marquette Mohawks on the ropes on Friday night, pulling within four late in the game.

The Irish had to foul to stop the clock, and the No. 2 Mohawks pulled away and took a 44-34 victory from the Irish on their homecoming night.

The Irish got out to a slow start against the Tri-Rivers Conference opponent. They committed well over double digit turnovers and saw the Mohawks easily putting up points in the paint.

They were able to score just five points in the first quarter, falling being 13-5 quickly.

The Irish continued to get good looks, finding posts Lilly Isenhour and Sarah Moeller wide open, but they couldn’t finish.

The Irish boys took a quick lead and held on for their homecoming win on Friday, avenging a loss earlier this season. Prince of Peace downed the Mohawks 66-49.

Junior Kyler Wallace exploded for a season-high 30 points on the night, while Marcus Blount added 12 and Nathan Moeller another 11. The Irish led by 12 after the first quarter and never relinquished their hold on the Mohawks.

The Irish ladies (11-9) will wrap up their regular season on the road on Tuesday, traveling to Midland. The boys (7-11) will join them on the roadtrip.

CAMANCHE – The Camanche boys had an early night on Friday with a cancelled girls game, but it didn’t affect them as they downed Anamosa 91-65.

The Indians were led by a double-double from Caleb Delzell, who put away 28 points and 11 rebounds. Cameron Soenksen added another 20 points to the mix.

The Indians had been struggling with illness throughout the week, even cancelling a practice earlier. The girls forfeited their contest with the Blue Raiders on Friday night.

The Indians (16-2) and will now play conference foe Monticello on the road on Tuesday.

MARION – No. 10 Central DeWitt girls couldn’t overpower No. 2 Marion, while the boys nabbed the upset in a home varsity split on Friday night.

For the girls, it was just the second loss of the season – both coming to top three teams in the state. The Sabers had the lead after one, but watched that swing the other way as Marion took the 26-20 lead by halftime.

The Central DeWitt boys (12-5) play Northeast his Saturday in a non-conference game before returning to WaMaC play next Friday against South Tama.

FULTON, Ill. – Coming off a huge win over a ranked Rockridge team, the Fulton boys continued dominating their season with a 63-33 win over Sherrard on Friday night.

Bradlee Damhoff lead with 18 points on the night, while Connor Barnett added another 16.

The Steamers improve to 20-6 and 7-0 in the Three Rivers Athletic Conference.

WYOMING – Another win for the No. 1 Easton Valley boys kept their conference and overall record perfect on Friday.

The posts led the way for the orange and gray, with Hunter Holdgrafer ending with a team-high 16 points and Logan House adding another 14.

Easton Valley (18-0) is one of just four undefeated teams in the entire state. They play two home games next week, starting with Morningstar Academy on Monday and then returning to conference play by welcoming Lisbon on Tuesday.