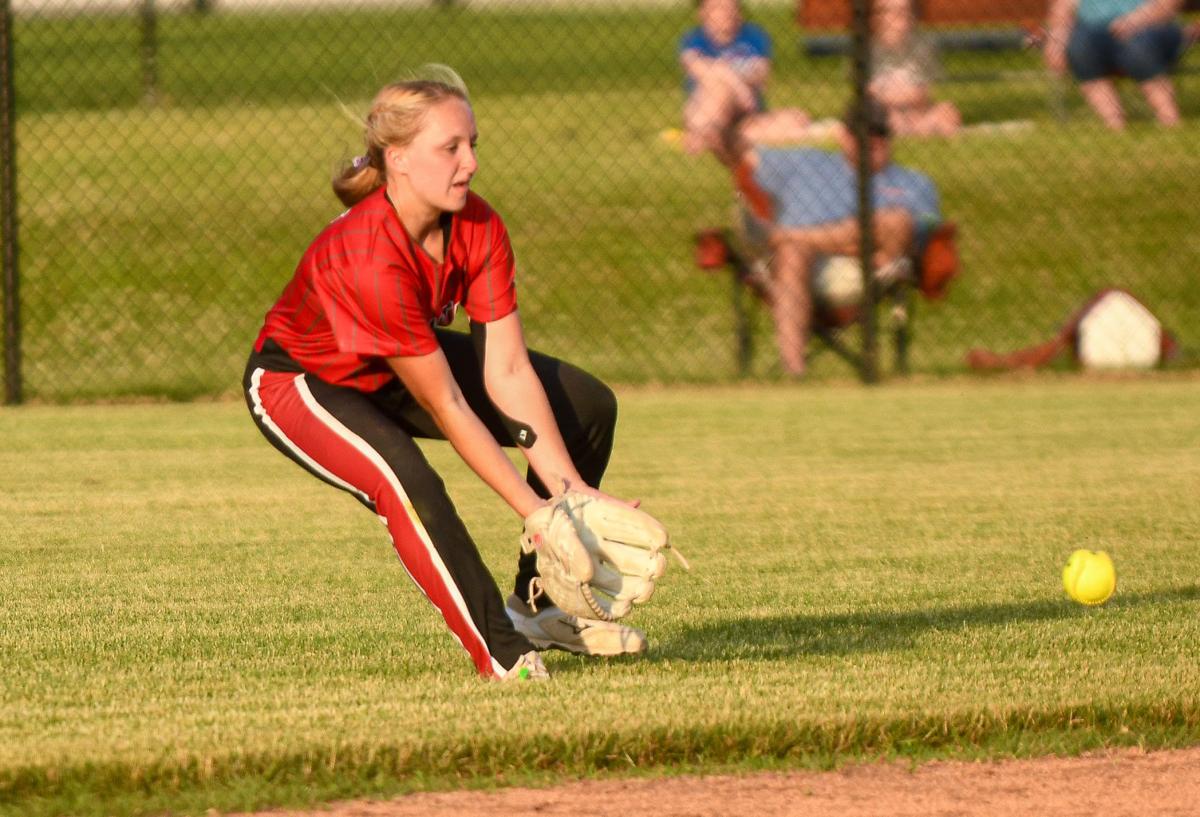 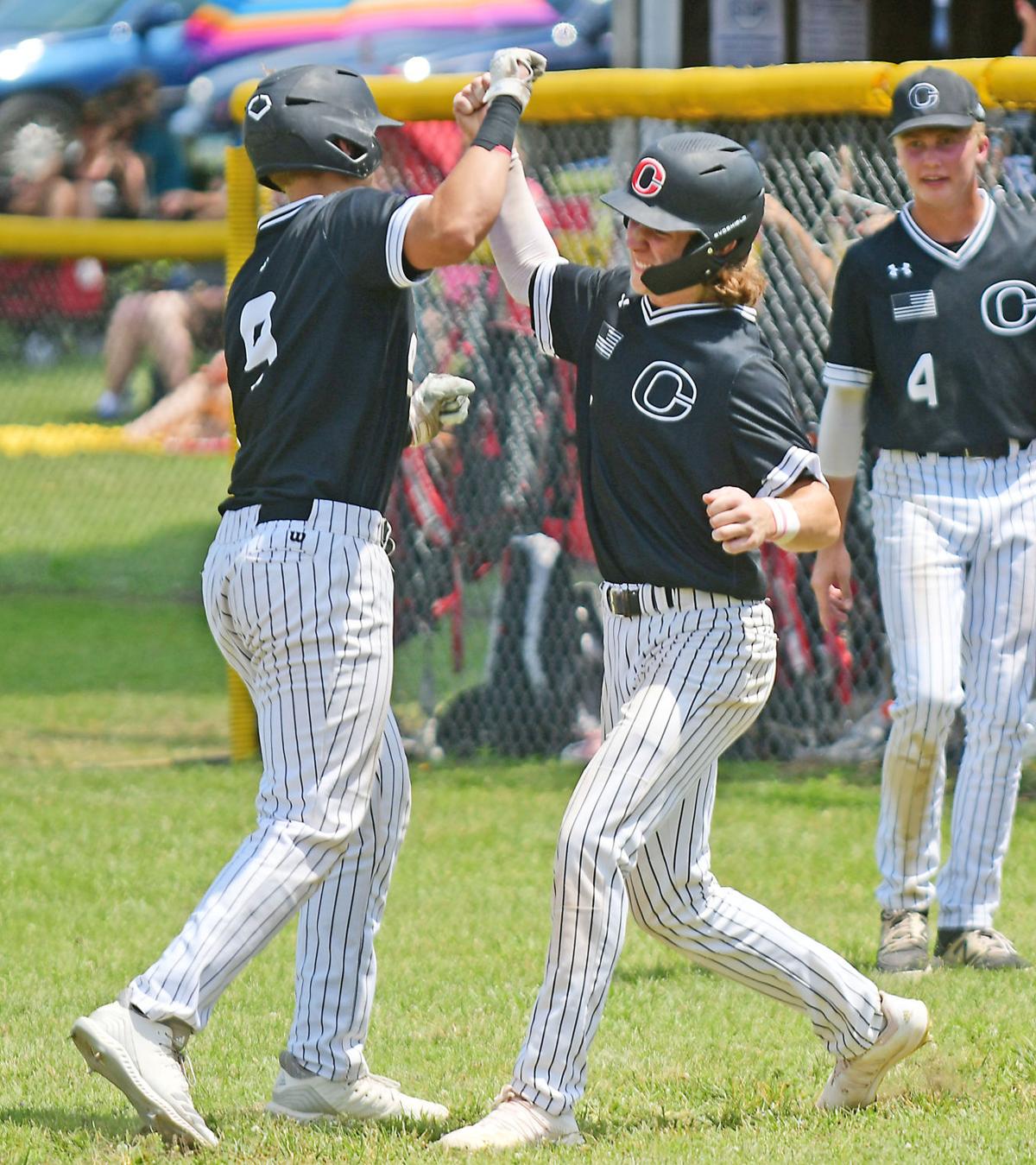 In this Herald file photo, Clinton senior Max Holy (7) meets sophomore Jai Jensen after Jensen hit a home run for the River Kings in their 8-6 win over Camanche.

In this Herald file photo, Clinton senior Max Holy (7) meets sophomore Jai Jensen after Jensen hit a home run for the River Kings in their 8-6 win over Camanche.

Lauren Brennan and the River Queens held off the Wildcats to start the game with a scoreless first. , but the second started with a leadoff double. An error and three more singled plated the first three runs of the game.

North then came out and scored eight runs in the third inning, seven of them coming with two outs recorded.

The Queens weren’t able to plate a run until the third inning. Emma Milder reached base on an error and then managed to scored on an Amber Lee RBI single.

North once again jumped out on Clinton early in the second game. They scored three runs in the home half of the first inning, adding four more runs through the rest of the game.

After the three-run first, though, the Queens never let the Wildcats score more than one an inning.

The Queens struggled to move runners around. They left 12 runners stranded throughout the night, only socring one run in the top of the sixth. A lead off single by Casy Mandrell was brought across home on a single from Lauren Brennan.

Clinton falls to 2-8 on the season.

The River Queens return to action on Thursday, traveling to the Quad Cities once more to take on Davenport Central.

WILTON – Camanche baseball snapped a losing streak while the softball team dropped their fourth straight in varsity contests at Wilton on Monday night.

The softball team had a comeback effort fall short, losing 7-6 to the Beavers.

“Tough loss tonight,” softball head coach Andrew Carbajal said. “We dug a hole and our girls battled adversity to almost overcome it. We had a huge seventh but couldn’t finish.”

The Beavers plated six of their runs in the first two innings.

After a solo homer from Tarah Wehde to lead off the first inning, the bats were silent for the Indians until the seventh inning. A leadoff double from Jamie Robertson ended up resulting in five runs for the Indians, just short of tying the game.

“We need to work on building grit and keep believing we are good enough to play in our conference,” Carbajal said.

The baseball team went to extra innings for the second time in the last three contests, coming out on top 4-3.

In the top of the eights, a groundout by Ethan Buckley scored the go-ahead run for the the Indians, and then Logan Shaw came on in relief to end the game.

Brayden Lodge pitched six innings for the Indians, allowing just two runs and one hit over his six innings of work, striking out six.

The baseball team is back in action on Tuesday night, taking on the No. 1 ranked Central DeWitt Sabers on the road.

The softball team and baseball team both play on Wednesday, welcoming North Cedar to their home fields for a makeup game

DEWITT – Class 2A No. 6 Beckman Catholic visited the newly ranked No. 1 Sabers on Monday, and the Sabers came away with a clean sweep in yet another battle of heavyweights.

The Sabers won the first game 2-1 and then blanked Beckman 10-0 to finish out the night.

The Sabers are back in action on Tuesday night, welcoming non-conference opponent Camanche to their home diamond.

CASCADE – The No. 7 Northeast softball team had no issues rebounding from their first loss last week, taking down Cascade 15-4 on Monday night in River Valley Conference action.

Claire Abbott and Bree Mangelsen both knocked in three runs a piece, while Valerie Spooner added three hits to the mix to accumulate the six-inning victory. Thirteen of the Rebels’ runs were scored in the first three innings.

Madison Kluever pitched the five innings for the Rebels, allowing eight hits and four runs while striking out two. The Cougars knocked two balls out of the park as a part of their eight hits.

On the baseball field, the Rebels picked up their first victory of the season, winning 1-0 over the Cougars.

The Rebels tallied just four hits, but one of Dakota Stevenson’s knocked in the only run of the game in the top of the seventh.

Stevenson also pitched six and a third innings, allowing just three hits and no runs. Cade Hughes came in to close out the game and solidify the win.

The Rebels improve to 8-1 on the year and will play a doubleheader against Central DeWitt Tuesday night back in Goose Lake. The baseball team improves to 1-7 and return to action on Thursday night, welcoming Regina Catholic to Goose Lake for more RVC competition.

CAMANCHE – It was a good, clean win for Clinton baseball on Saturday afternoon.

After a conference doubleheader filled with errors to end their week, the River Kings bounced back with an 8-6 win over the ranked Class 2A Indians.

“I think defensively we played pretty well and we were able to string some hits together,” Clinton coach Kevin Cunningham said. “I think that was pretty good for us.”

Joe Simpson started for the Kings, not allowing a hit in his first innings of work. Tavian Bailey took over on the mound, all of the Indians’ hits coming in his three innings.

“Real happy with how our pitching battled,” Cunningham said. “You never know what you’re going to get in the morning, either.”

Jai Jensen went 2-for-four with four RBI, including a homer in the seventh inning.

Clinton scored four runs in the top of the third, plating three more in the fifth and one in the seventh. All eight runs came off of just five total hits. The Indians recorded a plethora of walks and three fielding errrors.

“We’re going through a stage of a little mismanagement on the field,” Camanche coach Darryl Cochran said. “Errors are getting us a little bit.”

Meanwhile, clean defense and pitching held the Indians at bay. Their offense quieted, they weren’t able to make a real run at the River Kings until the seventh inning. They scored four runs, but never got closer than two.

“We’ve leaving a lot of runners on base,” Cochran said. “Our approaches weren’t the best. We had our opportunities early on.”

Clinton’s Monday game was postponed on Monday, taking the field again on Wednesday with another non-conference game against Class 3A No. 1 Central DeWitt. The Indians played in Wilton on Monday night, see C1 for scores.