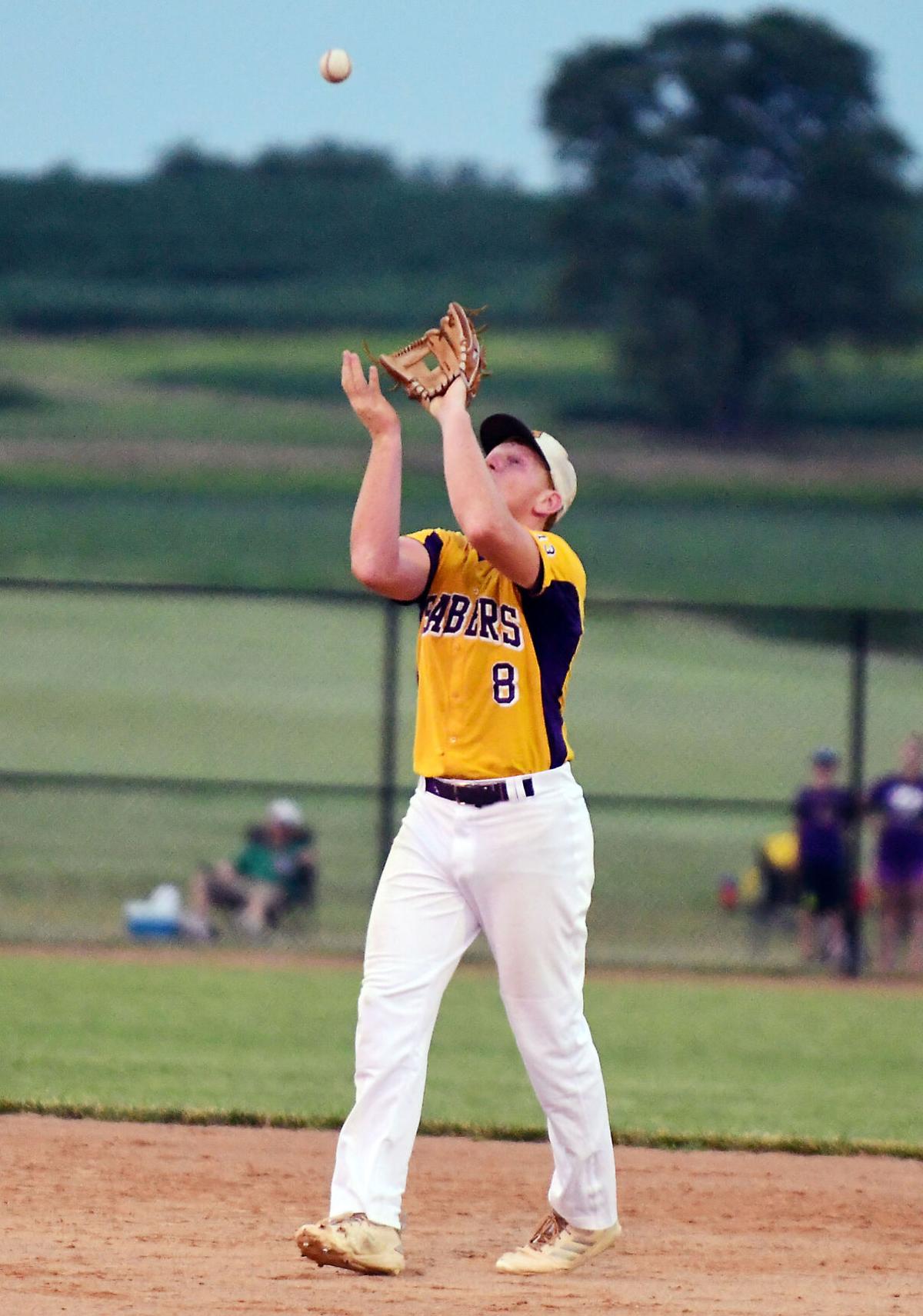 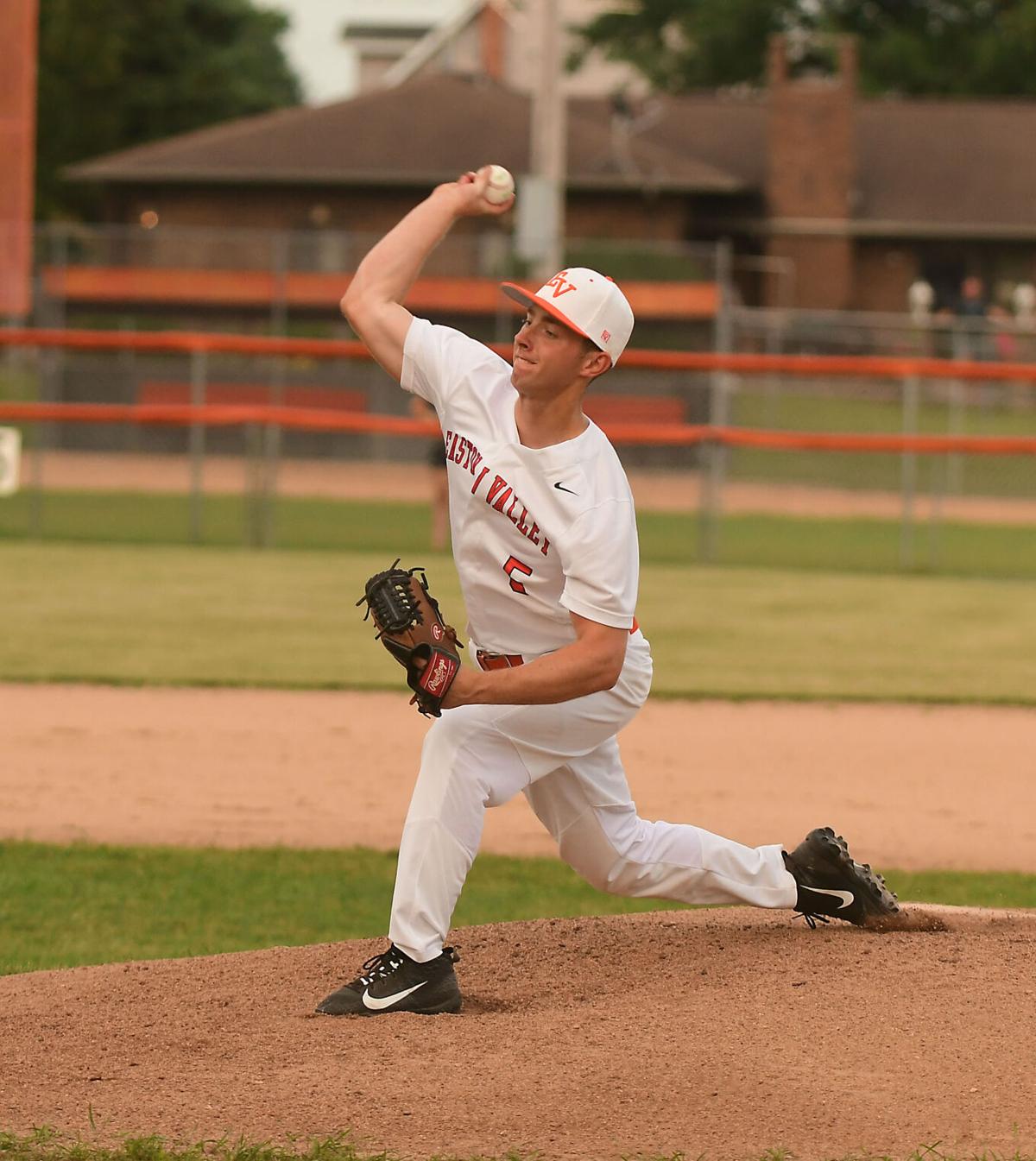 Easton Valley’s Austin Franzen delivers a pitch during the River Hawks’ game against North Cedar. The Knights handed the River Hawks their first loss of the season in the 3-1 contest, ending the postseason hopes.

Easton Valley’s Austin Franzen delivers a pitch during the River Hawks’ game against North Cedar. The Knights handed the River Hawks their first loss of the season in the 3-1 contest, ending the postseason hopes.

No. 3 Sabers advance to 3A substate

DEWITT – A 3-0 win clinched a district championship for the Class 3A No. 3 ranked Central DeWitt baseball team on Monday night, knocking out Center Point Urbana and sending the Sabers on to a sub-state game late this week.

The three-hit shutout came from the arm of senior Alex McAleer, who pitched all seven innings for the Sabers. McAleer struck out seven, walked two and allowed no runs in his time on the mound.

In the bottom of the second, three consecutive singles from Nolan Haack, Henry Bloom and Ben Mason loaded the bases for the Sabers. Kaiden Muhl sent a fly ball to right field,allowing Haack to tag in for the first run of the game.

Ben Mason scored the second run of the inning on a wild pitch.

The third run for the Sabers came in the home-half of the fifth inning. John McConohy walked to lead off the inning, stealing second and advancing to third. That allowed a sac fly from Tucker Kinney two batters later to sen McConohy home for a 3-0 lead.

Central DeWitt will welcome Marion to their home field on Wednesday night for a chance at a ticket to state. The two met in the first game of the season, the Sabers walking away with two separate 7-2 victories.

Saber softball bows out of tournament

EPWORTH – In one of the closest games of the season, the Central DeWitt softball team was thwarted in the final inning on Saturday night, falling 3-2 in an extra inning battle with Western Dubuque.

The Sabers had the 2-1 lead heading into the seventh inning at Western Dubuque High School, looking for a trip to the Class 4A regional final. The Bobcats plated a run in the seventh to send things to extra innings, and then managed to score in the eighth to end things.

MILES – The No. 9 ranked Easton Valley baseball team was handed their first loss of the season on Saturday night by a red hot North Cedar squad, ending their postseason hopes in the Class 1A district final.

The Knights, who beat two top-9 teams in the last two games, beat the River Hawks 3-1 in Miles.

It was a battle between pitchers for most of the game, as Easton Valley’s Austin Franzen and North Cedar’s Ethan Sahr went head-to-head. Sahr ended with 11 strikeouts in his six innings of work. Tyler Thursten relieved him.

The River Hawks left five runners stranded throughout the night.

The Knights plated all three of their runs in the top of the sixth inning off of Franzen. North Cedar recorded their first hit of the night, followed by two more doubles and then another single to score three.

The River Hawks responded with a lead off double from Aidan Gruver in the bottom half of the same inning. Gruver eventually scored on a passed ball, cutting the lead to 3-1.

Jessen Weber wore a pitch in the bottom of the seventh to reach base, but he never made it home.