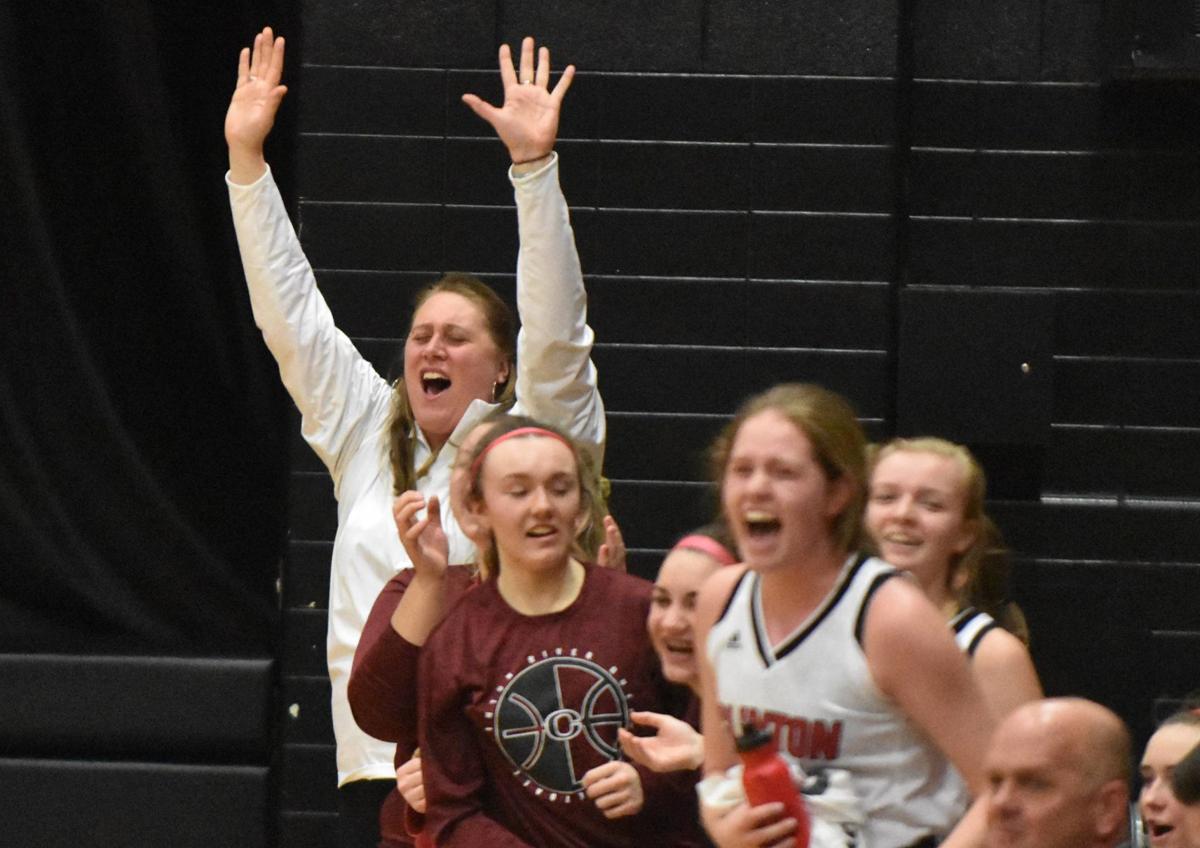 Head coach Cathy Marx and the Clinton bench react to a basket made by Michelle Powell during Clinton’s 51-41 victory over Burlington Tuesday night. 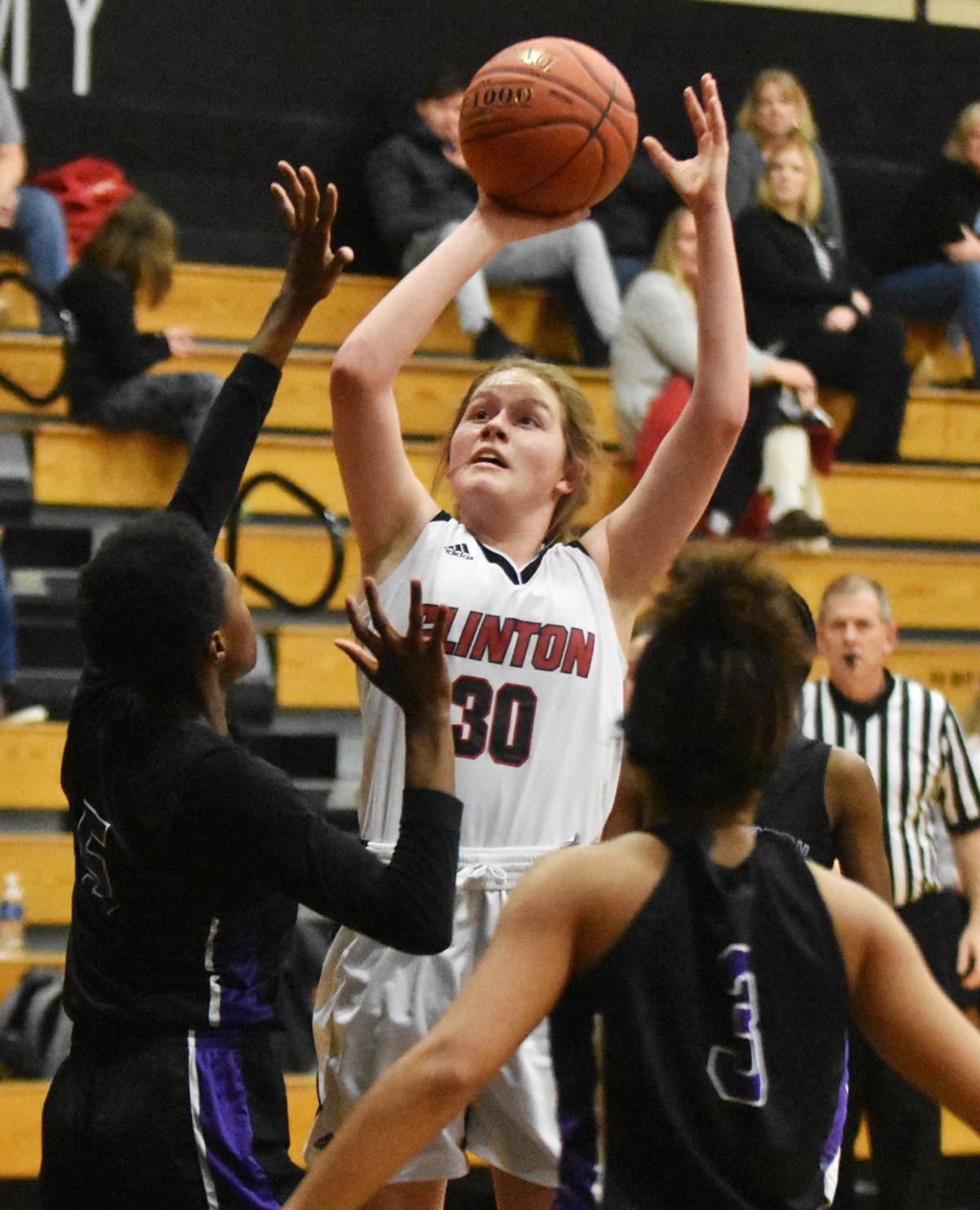 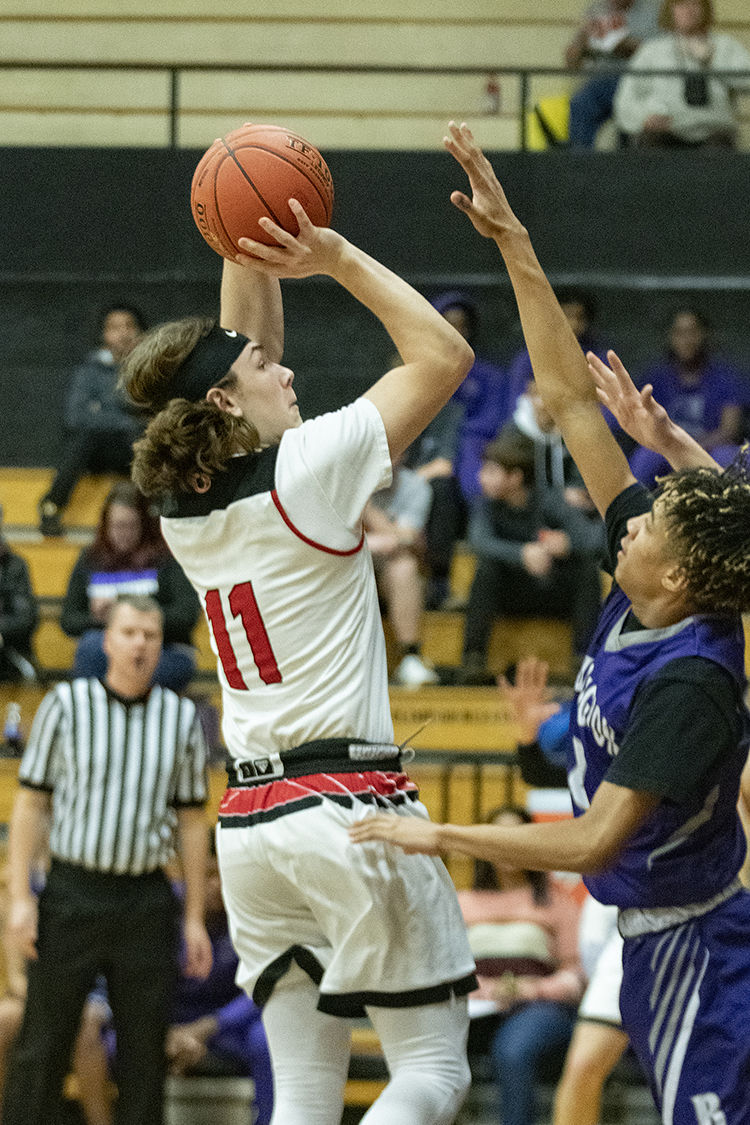 Head coach Cathy Marx and the Clinton bench react to a basket made by Michelle Powell during Clinton’s 51-41 victory over Burlington Tuesday night.

CLINTON – The Clinton River Queens have been struggling with turnovers and scoring all year, but made huge strides on Tuesday night.

It led them to their first win of the season and the first win under new head coach Cathy Marx. With a season-high offensive performance, the River Queens took down Burlington 51-41.

The Clinton girls came out of the gates with determination. On one of their first possessions Makenzie Cooley pulled down an offensive board and put it back it.

The Queens committed a couple of turnovers, letting the Grayhounds get in front of them on the other side of the court. That allowed Burlington to take the lead early, but Clinton quickly responded.

They trailed by just two after the first eight minutes.

That’s when they lit up. The Queens went on a 10-3 run to start the second quarter.

That run was capped by a bucket from Michelle Powell, who got a powerful post position on the left block before kissing it off the glass. That sent the bench into a frenzy, while Coach Marx just held her hands in the air and yelled.

Jamie Greenwalt nailed a three a few minutes later to give the River Queens their first double-digit lead not only of the game, but of the season.

The Queens improve to 10-1 and stay at home for the Mississippi Athletic Conference games later in the week. Although inclement weather is expected, the Queens are still scheduled to welcome Davenport West to Yourd Gymnasium on Friday night.

DEWITT – It didn’t take long for Taylor Veach and the No. 10 ranked Central DeWitt Sabers to get going on Tuesday night against the visiting No. 12 ranked Maquoketa Cardinals. The night ended in a 52-26 Saber victory.

The sophomore guard made her first three shots, including two three pointers to grab a 10-2 lead to start the game.

Coach Chad Specht was pleased with how the Sabers were able to bounce back after a close loss to Center Point Urbana last week.

“We try not to look at too many highs and lows and try to stay as even keeled as possible,” Specht said.

By halftime, the Sabers had built a 31-15 lead and managed to hold off a strong push by the Cardinals lead by Autumn Dykstra and Nell Sybesma early in the third. Veach lead all scorers in the game with 27 followed by Allison Meadows with 10. Meadows stepped up big when Veach fell into foul trouble early in the third quarter.

“It was great to see other players involved,” said Coach Specht. “We wanted to hold off on Taylor until the fourth quarter and the reserves were moving the ball well.”

Central DeWitt eventually claimed a 52-26 win using stifling defense around the rim on the Maquoketa forwards. Coach Specht was proud of the way his team bounced back.

“This is a good sign for the team, we couldn’t ask for anything more as coaches,” Specht said.

Central DeWitt improves to 10-1 and will face West Delaware at home on Friday. Maquoketa falls to 8-3 and will travel to Solon Friday.

CAMANCHE – The Camanche girls had absolutely no answers for a powerful Monticello team on Tuesday night, falling 48-7 at home in a River Valley Conference contest.

“Tough loss tonight,” head coach Andrew Carbajal said. “Monticello is a great team and the biggest team we’ll see. This game shows we have work to put in.”

The Indians were only able to score three points in the first half, a lone three-pointer from Emy Seeser. That sent the Panthers up 24-3 by halftime.

Seeser put in two free throws in the second half while Danika Dodson also made a basket, the extent of Camanche’s points.

The Indians return to action on Thursday in a game moved up because of weather, traveling to Wilton.

No. 1 Cougars too much for Rebels

GOOSE LAKE – The Northeast girls lost their second in a row on Tuesday, falling to the top-ranked Cascade Cougars 72-32.

The Rebel were able to put up only 11 points in the first half falling behind by double digits early on.

Northeast (7-5) turns their attention to North Cedar, who visits Goose Lake on Thursday.

Clinton runs out of horses in Burlington loss

CLINTON – Cold second half shooting and tired legs plagued the Clinton boys basketball team in the second half on Tuesday, allowing Burlington to take a 65-49 win from the Kings on their home floor.

The River Kings were right with the Grayhounds through the first half, still within striking distance by halftime.

The third quarter had the Kings within five points of the Grayhounds before their shooting went cold. They managed just four points through the first half of the final quarter, watching the Grayhounds extend their lead back out.

Damarcus Knox was the leading scorer for Clinton, putting up 13 points. That included a crucial six in the second half during the Kings’ rally. Max Holy had 11 points, seven coming in the final two quarters.

PRESTON – The No. 4 Easton Valley boys had no problems staying perfect with a 66-34 win over Tri-Rivers Conference opponent Lisbon on Tuesday.

After leading by single digits after one, the River hawks outscored the Lions 21-4 in the second quarter.

Kaleb Cornilsen had 25 points, while both Cade Jargo and Jessen Weber put up 11

Central DeWitt Bounces Back Against Maquoketa

The Central DeWitt Sabers outlasted the visiting Maquoketa Cardinal boys 63-39  in front of a large doubleheader crowd in DeWitt on Tuesday night.

“We got a lot of guys who can put the ball in the basket so we try and find the guy that’s got it going. We’d like to do it a little better, a few too many turnovers, but when you're trying to play unselfish sometimes that happens, too.”

After a back and forth first quarter, Central DeWitt came out aggressive in the 2nd quarter attacking Maquoketa’s 2-3 zone while building a 28-19 lead, but ended up on the receiving end of four offensive fouls. This forced Coach Gallagher to look to his bench for others to step up.

“Guys like John McConohy, Ben Mason & Kaiden Muhl have been solid for us off the bench all year. It’s really their first shot at varsity basketball so the credit goes to them for being prepared and working hard. We feel good when those guys are in the game.”

Senior Tucker Kinney was able to find baskets in the paint while the Saber guards moved the ball through the Maquoketa zone, sinking a game high 16 points including 8 in the second quarter.

“I thought he did a great job attacking the offensive glass and making us box out every possession. When he gets it on the low block, he can rebound well and score,” Gallagher said.

The Sabers closed the game on a 14-9 run in the fourth quarter to improve to 7-2 on the season and will travel to face West Delaware Friday while the Cardinals fell to 2-7 and will play at Benton on Friday as well.