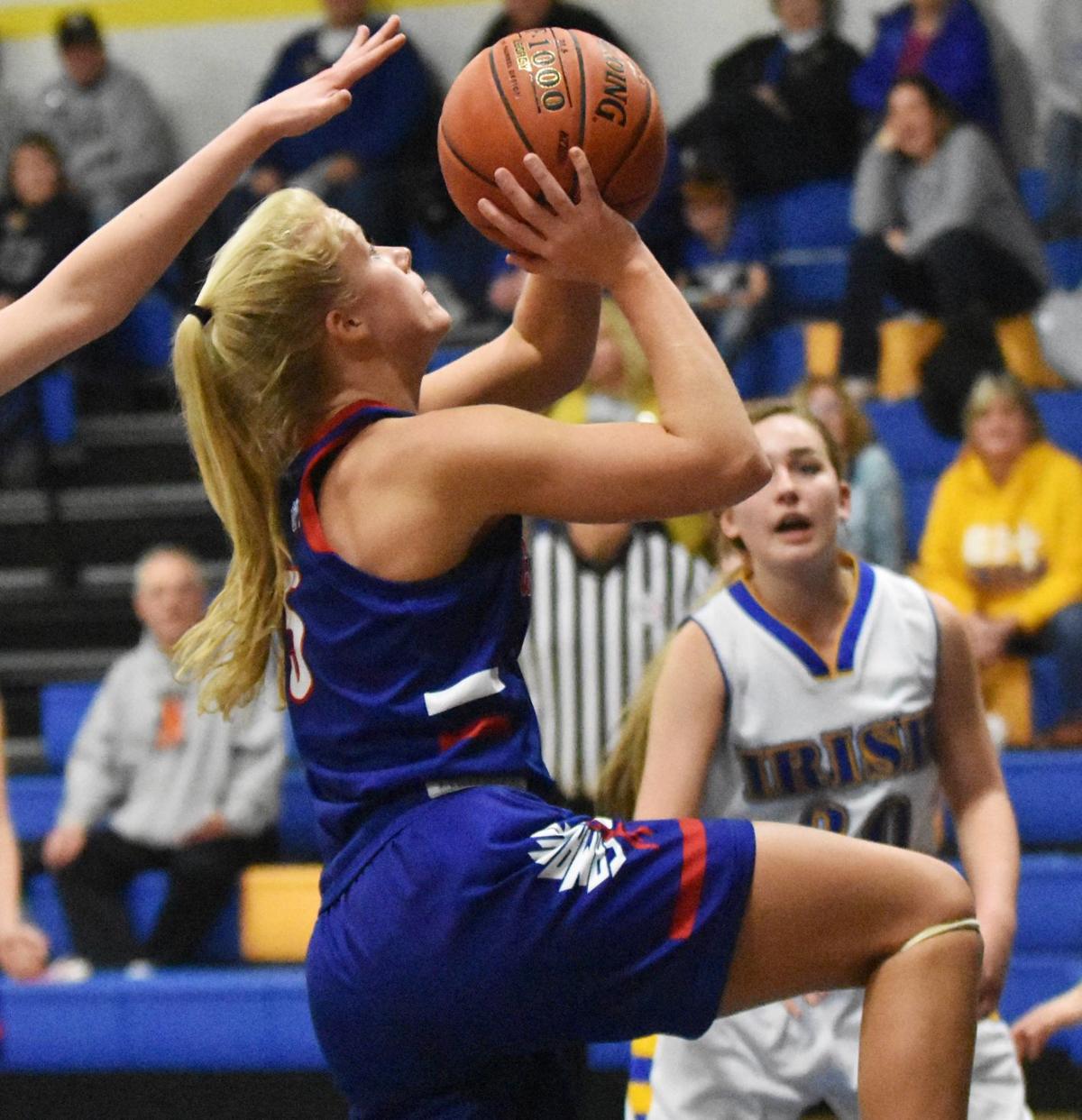 In this file photo, Camanche’s Tarah Wehde shoots a layup at Prince of Peace. The Indians won a road game over North Cedar on Tuesday night. 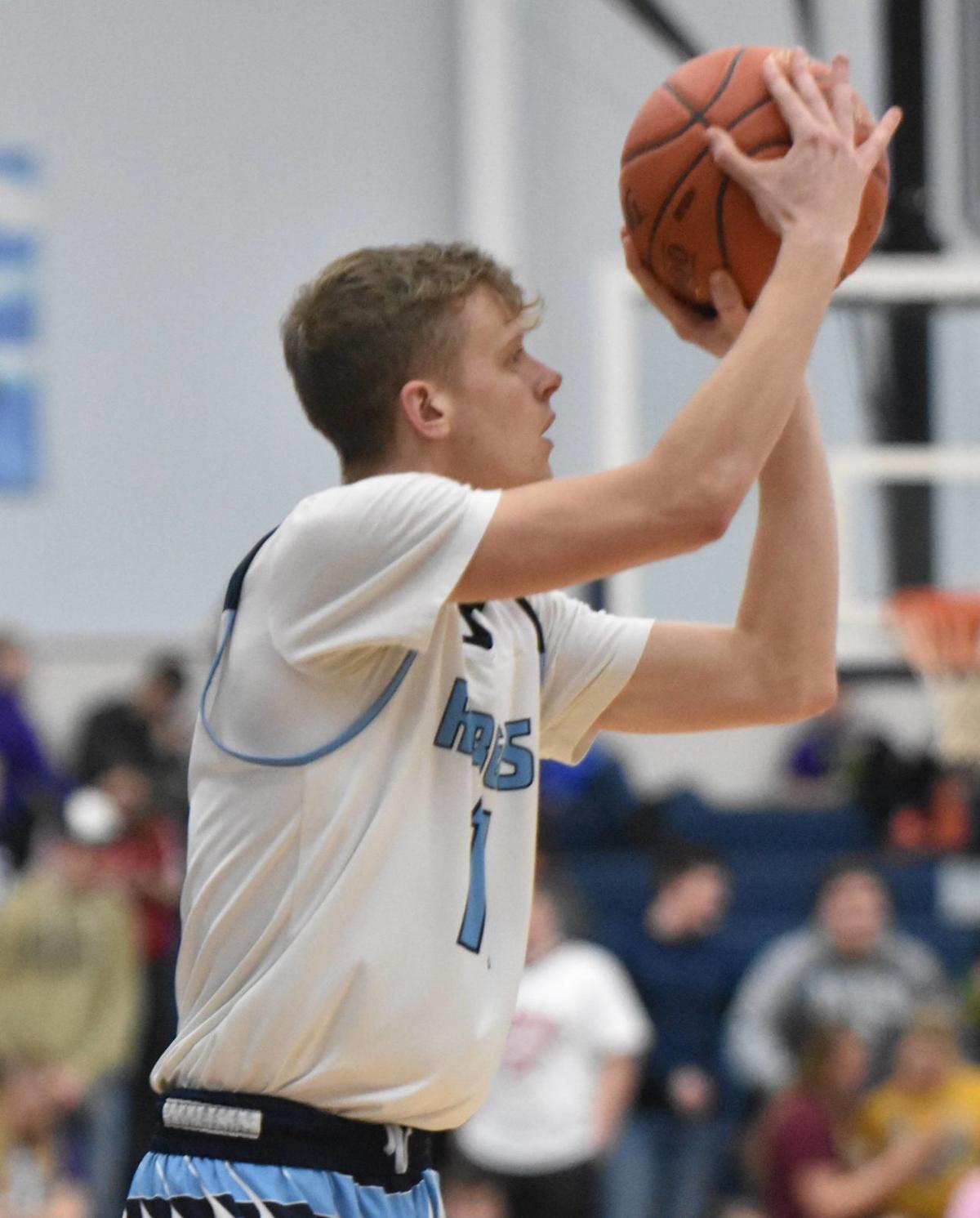 In this file photo, Northeast’s Grant Rickertsen shoots a three during a home game against West Liberty. Northeast won a road game against Anamosa on Tuesday.

In this file photo, Camanche’s Tarah Wehde shoots a layup at Prince of Peace. The Indians won a road game over North Cedar on Tuesday night.

In this file photo, Northeast’s Grant Rickertsen shoots a three during a home game against West Liberty. Northeast won a road game against Anamosa on Tuesday.

CLARENCE – Both the Camanche girls and boys picked up River Valley Conference wins on Tuesday night, downing North Cedar in a varsity sweep on the road.

The Indian ladies took a 68-55 win over the Knights home to Camanche, led by a 17-point effort from senior Tarah Wehde.

Wehde hit four threes – part of the teams’ seven total, to kick start her 17 points. Aubrey Carstensen and Maci Sloane both had 12 and Lauren Snyder put in 10.

The score was tied 50-50 at the start of the fourth quarter, but the Indians jumped out and drained seven free throws to help lift them to a lead. Snyder had five of her ten points in the fourth.

The girls improve to 5-11 on the season.

The Camanche boys suffocated the Knights with with an 83-44 victory, holding them to just 19 points in the fist half while they took a commanding lead.

CALAMUS – For the second time this year, the No. 1 Easton Valley boys reached triple digits, rolling Calamus-Wheatland and capping off a double varsity win for the River Hawks.

Both Jessen Weber and Kaleb Cornilsen scored over 20, with Weber putting up 27 and Cornilsen another 24. Cade Jargo, Nate Trenkamp and Hunter Holdgrafer also reached double digits.

The River Hawks drained 12 threes, including five from Weber in the first half alone.

Easton Valley improves to 15-0, remaining one of the five teams in the state who have yet to lose a game.

RaeAnn Carlson and Sydney McNeil led the River Hawks in a 52-40 win over Calamus-Wheatland. Carlson put up 17 points and McNeil 15, while the two combined for 15 rebounds as well.

The River Hawks were behind after the first two quarters but dominated the third, outscoring the Warriors 18-4. They improve to 8-7 on the season.

Easton Valley will now take a short break, returning to action next Tuesday when they take the short trip to Prince of Peace.

DEWITT – The No. 10 Central DeWitt girls were led by 19 points from Allie Meadows in a 56-40 win over Beckman Catholic on Tuesday night at home.

Five players, aside from Meadows, hit threes in the effort as well. Taylor Veach had 11 points and Talbot Kinney finished with seven.

Central DeWitt improves to 13-1 and will stay at home for their next WaMaC contest, welcoming Mount Vernon on Friday night.

ANAMOSA – Both the girls and boys teams managed to get the victories on Tuesday night in a road River Valley Conference match up against Anamosa.

The girls took down the Blue Raiders 69-45, rebounding from a loss to No. 12 West Liberty.

The boys extended a win streak to three games, taking down the Blue Raiders 54-40. They improve to 10-5 on the season.

The Rebels stay on the road on Friday, making a short trip to Camanche for another RVC game.

CLINTON – The Irish picked up a varsity sweep on Tuesday night in Tri-Rivers Conference play, both teams dominating Cedar Valley Christian at home at the Joe O’ Donnell Sports Center.

Three girls scored in double digits for the Irish in a 67-27 rout of the Huskies.

Anabel Blount finished with 15, Isabel Hansen with 14, Paige Kuehl with 13 and Lilly Isenhour with 10.

The Irish struggled to score for the first four minutes of the game, actually falling behind 10-5 by the time the first quarter ended. They came back to outscore the Huskies 24-9 in the second quarter and never looked back. They improve to 9-8 on the season.

The Irish boys improve to 5-9.

The Irish head on the road next, traveling to Lisbon on Friday.