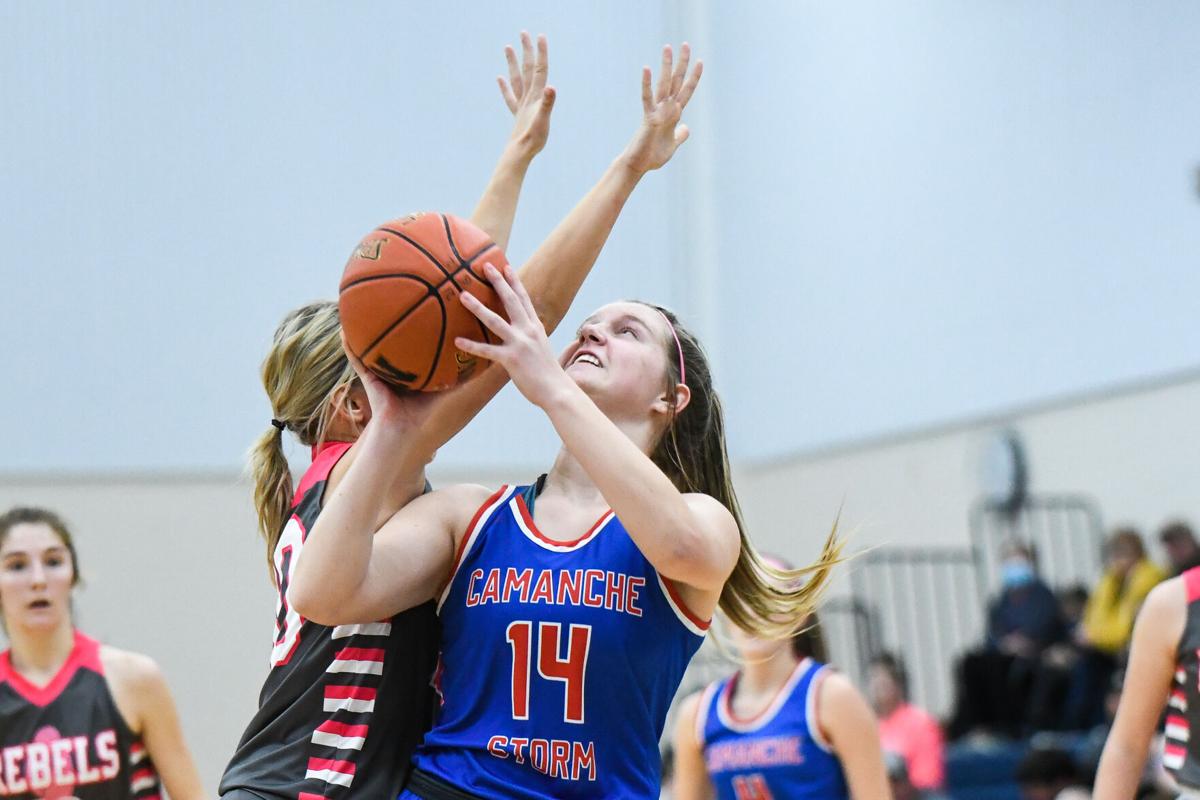 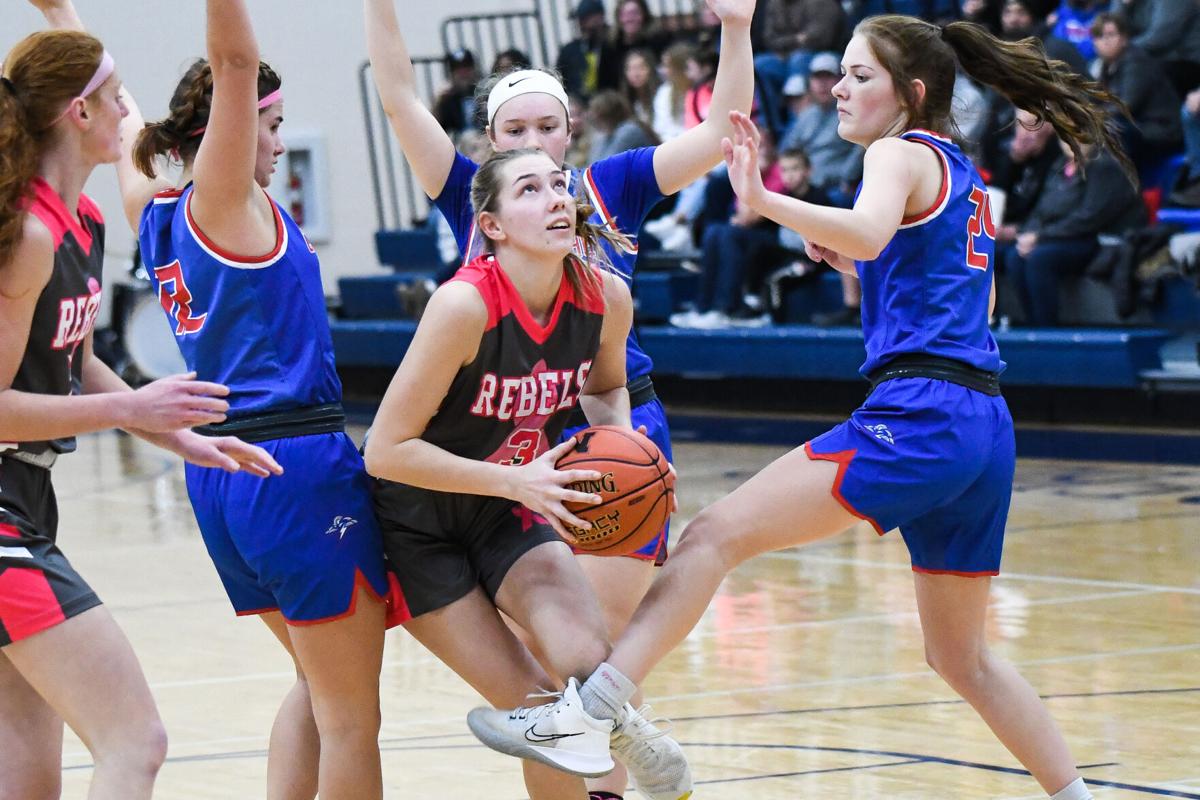 GOOSE LAKE — Confidence is what the Camanche Storm are pointing to after winning two games in the last four days.

That included a 44-35 win over Northeast in River Valley Conference action Tuesday night.

“[There’s momentum] for sure,” Camanche’s Emerson Crigger said. The Storm also beat Clinton on Saturday by a significant margin. “Our defense is doing great, our posts are driving and passing it back out, that’s where we’re getting a lot of our points from.”

The Storm fell behind quickly at the beginning of the contest. Northeast had a 9-7 lead after one quarter and then went on to outscore Camanche 9-2 in the first half of the second.

Emerson Crigger knocked down a three and the Storm took off.

They finished the quarter outscoring Northeast 11-0 to take a 20-18 lead into the halftime break.

They continued scoring and knocking balls out of the Rebels’ hands in the beginning of the half, not letting Northeast score until 5:40 when Morgan Foster was fouled.

“I think the team is really meshing well this year,” Danika Dodson said. “I know if I’m going, I have my trap coming. We trust each other and we move as one. We have a lot of chemistry and that’s helping our defense a lot.”

They had a ten point lead after another three by Crigger, who finished with a team high 16. Danika Dodson also had nine for Camanche.

“Coming out, I want to shoot and do this for my team,” Crigger said. “We want to get as many points as we can.”

The Rebels looked good when they were moving the ball inside. Alyssa Fowler led the team with 10 points on the night.

“[Alyssa Fowler] has been doing better on her inside moves,” head coach Johnny Driscoll said. “Still have to get the ball up a little bit but she has a really nice touch and is confident with the ball. You see a couple times when she goes coast to coast and gets a smile on her face and know she’s having fun, that energy transfers to the rest of the girls.”

They stopped looking to score after the Storm caused a few turnovers late in the first half. They started moving the ball along the perimeter and looking for passes instead.

“It’s inconsistent,” Driscoll said. “Some games we attack the gaps like we’re supposed to, attack the hoop. Other games, we get complacent and look to just get rid of it.

“WE have ball handlers and they’re not utilizing their skills every game.”

The Rebels did attempt a comeback and cut the lead to single digits, but the Storm finished when they needed at the free throw line.

“I knew I needed to stay calm,” Danika Dodson said. “We needed to look for girls, but stay calm when defense came for me. We knew it was going to be a wild crowd, so we just had to stay focused.”

The Northeast girls (4-4) travel to Regina on Friday night. Meanwhile, the Camanche girls (3-3) will return home and host Durant.

The Sabers scored the first 23 points of the contest and only allowed six points the entirety of the first half. Taylor Veach had 14 points in the first quarter alone.

The Sabers improve to 4-1 and will travel to Davenport Assumption Friday night.

The Central DeWitt boys also got a win on Tuesday, beating West 52-49 in a MAC thriller. Shawn Gilbert had a game-high 22 points for the Sabers, inlcuding ten points in the fourth quarter.

CAMANCHE – Tuesday night brought three local wrestling teams to the mats in Camanche, with the Central Dewitt Sabers coming out on top.

The Sabers beat Camanche 63-15. Picking up wins for the Storm were Rylan Toppert at 106, Hunter Log at 126, Ethan Benavides at 132. Topper won over DeWitt’s Dolan Theisen by a 6-1 decision.

Picking up pins for the Sabers in the Camanche portion of the double dual were Ryan Kramer at 138, Cael Grell at 145, Carter Donovan at 152, Lawrence Flynn at 160, Layton Slaymaker at 182, Mitchell Howard at 220 and Sam Gracert at 285. Howard won by fall in just 16 seconds and Slaymaker also won under 25.

Camanche did pick up a win over the Steamers as well. Picking up their second pins of the night for the Storm in the Fulton dual were Hunter Long and Ethan Benavides.

For the Steamers, Zane Pannell had two pins on the day at 182, pinning Camanche’s Ben Gravert in under a minute. Ben Fosdick at 138 also doubled up his wins by fall, as did Connor Sheridan at 152 who pinned Camanche’s Preston Rumler in 36 seconds.

All three are back in action on Saturday at Central DeWitt’s home invitational.

Carey M. Christoff, 56, of Clinton passed away Thursday, January 27, 2022 at the University of Iowa Hospitals and Clinics. Services are being planned for spring at the Camanche Chapel Snell-Zornig Funeral Homes & Crematory.