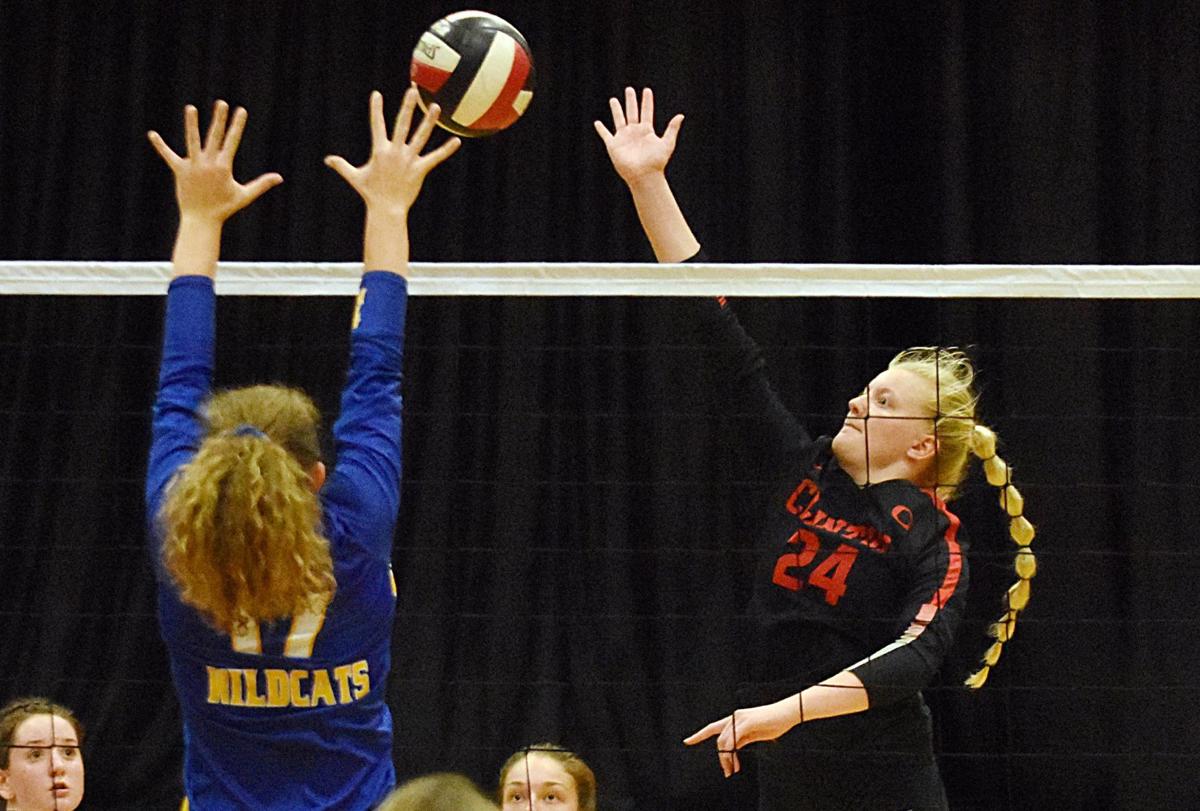 Clinton’s Bailey Wing (24) reaches for a ball on an attack during Clinton’s 5-set conference win over Davenport North on Tuesday night at home. Wing ended with 10 kills for the River Queens. 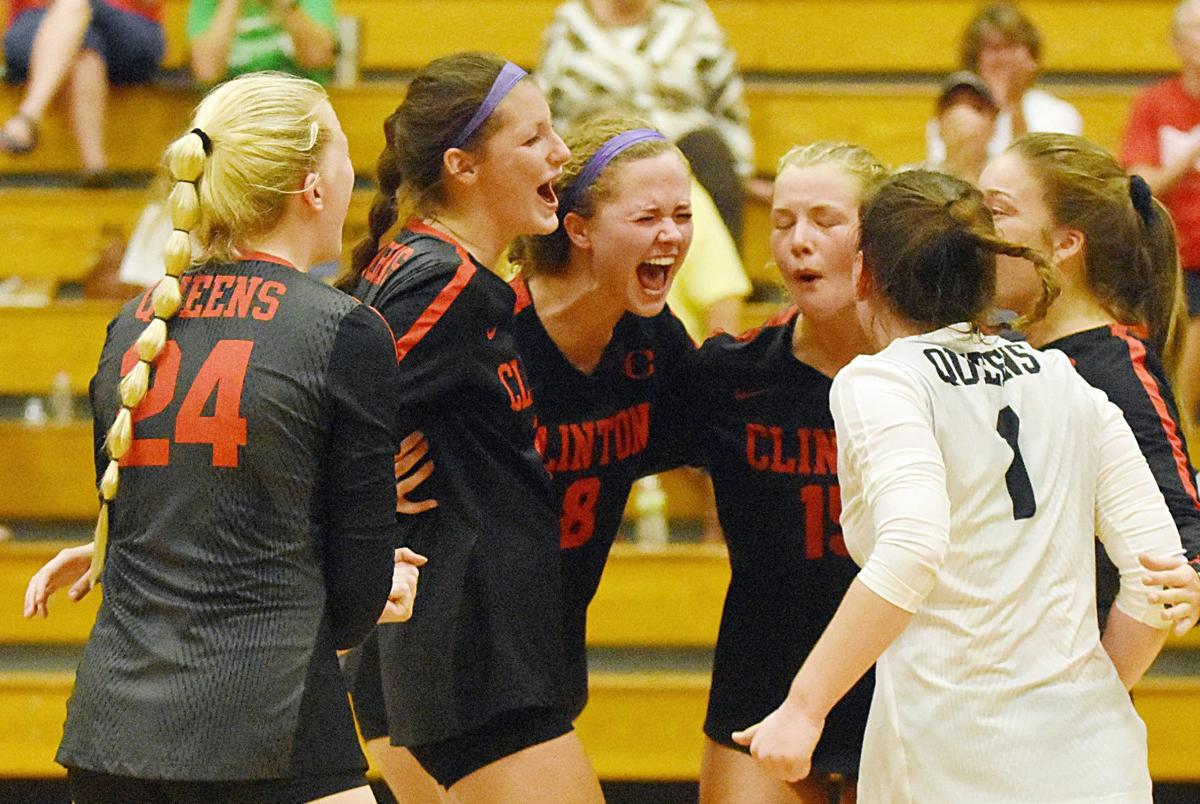 The Clinton volleyball team celebrates a point in the fifth set during their win over North on Tuesday night. 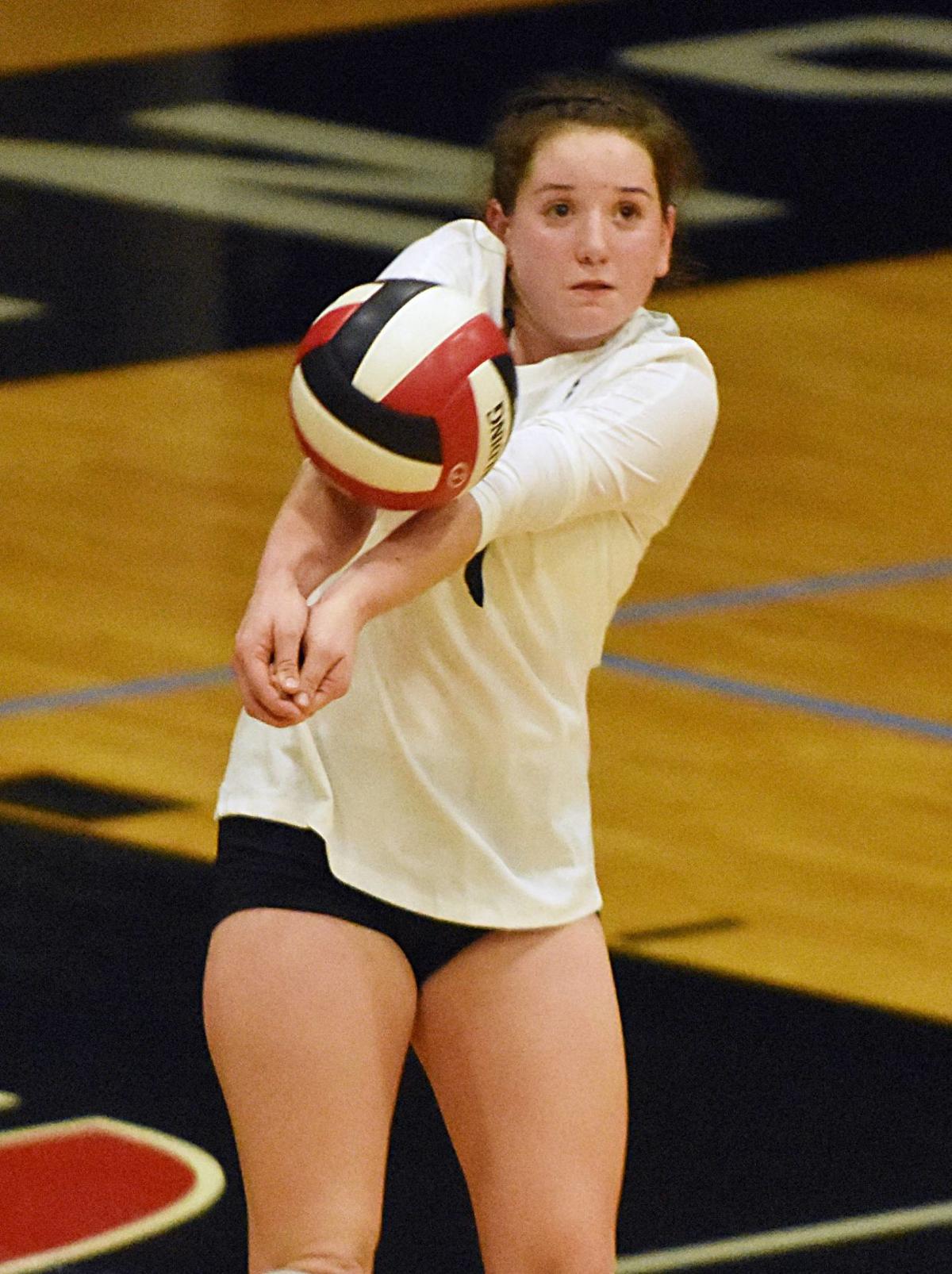 Clinton’s Riley Mussman passes up a ball during Clinton’s Mississippi Athletic Conference win over Davenport North at home on Tuesday. 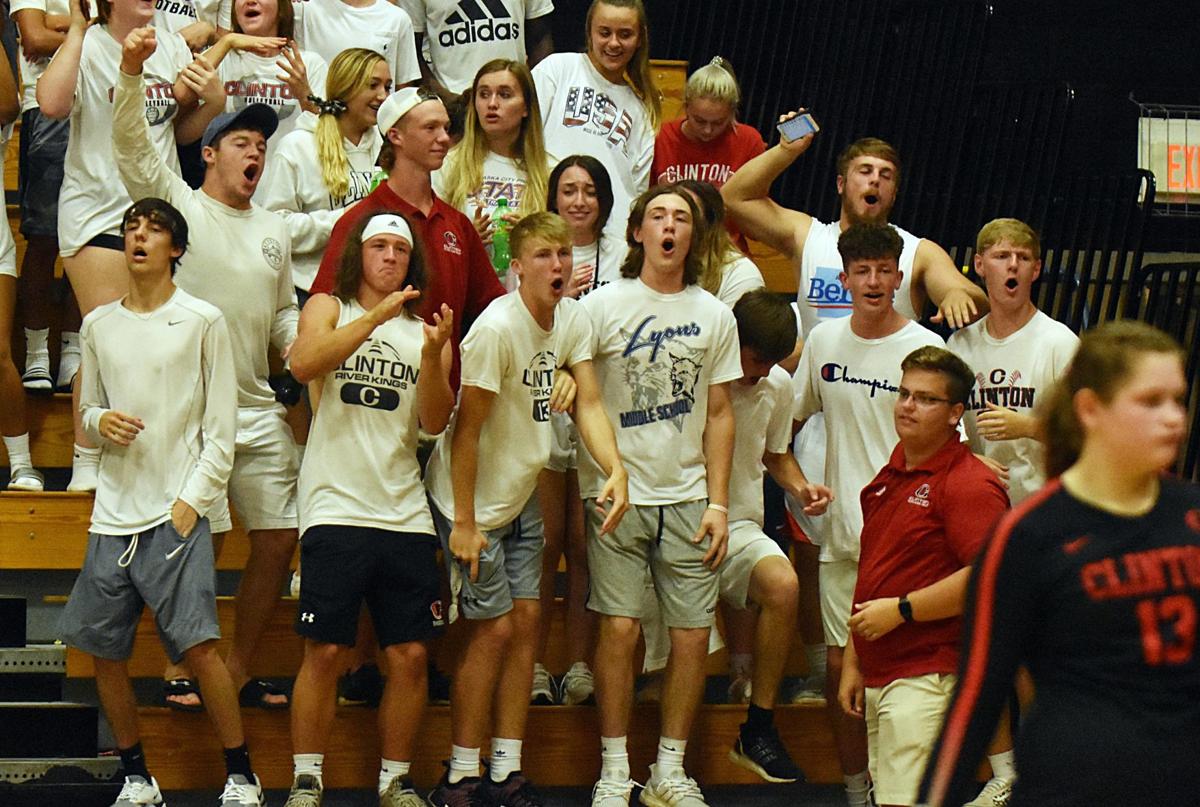 The CHS Royal Army cheers for the Clinton volleyball team before the start of the fifth set on Tuesday night, which would end in a River Queen win over Davenport North.

Clinton’s Bailey Wing (24) reaches for a ball on an attack during Clinton’s 5-set conference win over Davenport North on Tuesday night at home. Wing ended with 10 kills for the River Queens.

The Clinton volleyball team celebrates a point in the fifth set during their win over North on Tuesday night.

Clinton’s Riley Mussman passes up a ball during Clinton’s Mississippi Athletic Conference win over Davenport North at home on Tuesday.

The CHS Royal Army cheers for the Clinton volleyball team before the start of the fifth set on Tuesday night, which would end in a River Queen win over Davenport North.

CLINTON – The Clinton volleyball team sure made their first Mississippi Athletic Conference win an exciting one.

Deep in the fifth and final set on a Tuesday night home match in Yourd Gymnasium, the River Queens found themselves down 14-13 to Davenport North with match point coming up. Head coach Micah Cewe called his final timeout of the set.

“We told them to take a deep breath,” Cewe said. “We came up with a set play and told them to get the ball in Kelly [Clark]’s hands.”

The Queens came out and got the ball to Kelly Clark, who swung around a single blocker for a kill.

The Wildcats came back with a kill of their own off the hands of Clark and Kaylee Camp.

Bailey Wing evened things up once more at 15-15 with a kill, sending things to extra points.

After the Wildcats found an empty corner to take the lead once more, setter Brooke Mulholland pushed back to find middle hitter Makenzie Cooley, who put the slide attack away cross court. On a chaotic rally, Cooley saved the day with a lunging top to send a ball over the net, where it found the court to give the Queens a 17-16 advantage.

“Makenzie Cooley is very unorthodox in her swing and her play but she finds ways to get things done,” Cewe said. “A tight ball, she swipes. A ball behind her, she can get that ball up. That’s what we needed.”

“If I could give us one word it would be resilient,” Cewe said. “A lot of things could have gone wrong and a lot of things did go wrong at times, but for our kids to stay calm and aggressive and there for each other, that’s what won the game for us.”

The River Queens came out and dominated the first two sets with a flowing offense, big block up and scrappy play. They looked on pace to sweep the Wildcats, who came in with a similar record on Tuesday night.

“We really played good volleyball in sets one and two,” Cewe said. “Consistent from start to finish, which is good to see.”

In the third set, the Queens let up a bit. They started handing over free points in the form of serving and attack errors, visibly dropping the energy as the set went on.

That same trend continued in the fourth. Swings were heading far out of bounds and too many serves found the net instead of the Wildcat back row.

“We knew North would throw things at us and it wouldn’t be an easy three,” Cewe said. “We only have eight regular season games a year that are best three out of five, and the MAC is tough. We have to find ways to stay consistent and aggressive longer.”

The lineup, which looks a little different than the last home game and even more different from the one before that, was excited through and through with new faces filtering in and out. The Queens have a little different looking lineup nearly every game, and approach Cewe says keeps them consistent throughout the lineup.

“We want all 17 kids to fight for their spots,” Cewe said. “We’re very balanced and when one struggles we can bring another one in. We want them to earn every point and every position.”

The consistency throughout the lineup showed Tuesday, with the front row evenly contributing. Clark, Davis and Wing all had double digit kills with 12, 11 and 10 respectively. Clark and Kaylee Camp dominate the net with five blocks each, whole Makenzie Cooley added another two.

Rylie Mussman dug up 23 balls in the back, with Brooke Mulholland, Kira Price and Lakin Houzenga combining for another 32.

The River Queens (7-14) will now look to win two in a row, taking on Davenport West on Thursday on the road. The Falcons have yet to win a game this season.

WYOMING – The Prince of Peace Irish won their second conference match in a row with a three set sweep of Midland on Tuesday night.

“We had a slow start to the first game but we started to pick it up and run our offense,” head coach Stacie Kenneavy said. “I’m very proud of how they pulled together as a team and turned things around.”

Lilly Isenhour and Anabel Blount both had seven kills, while Paige Kuehl and Sarah Moeller added four each.

Isabel Hansen and Blount both served two aces each of the team’s seven whole also leading the back row in digs.

The Irish (10-12) welcome Calamus-Wheatland to the Joe O’Donnell Sports Center on Thursday night to go for a third consecutive Tri-Rivers Conference win.

MORRISON – The Fulton golf team didn’t quite finish their regular season perfect after falling to Riverale, Newman and Princeton in the Three Rivers Athletic Conference golf meet on Tuesday morning.

“It was a disappointing day,” head coach Kevin Ver Hoeven said. “Although the way Riverdale played we wouldn’t have beat them at our best.”

The Steamers had beaten Riverdale earlier in the season, handing the Rams their first conference loss in five years.

Andrew Schrader finished second in the field with a 74. Both Josh VanderPloeg and Patrick Wiebenga shot an 88.

Ian Wiebenga finished with a 90 on the day while Alex Hartman golfed a 92 and Landon Meyers a 106.

The Steamers now turn their attention to regionals, where they hope to return individuals to the state meet. Schrader has qualified the last two years.

“Our kids are perfectionists and that is what has gotten them to where they are but it is also what makes it difficult for them when they don’t play up to their standards,” Ver Hoeven said. “Still, we have a lot to play for and I am confident that we will be up to the challenge.”