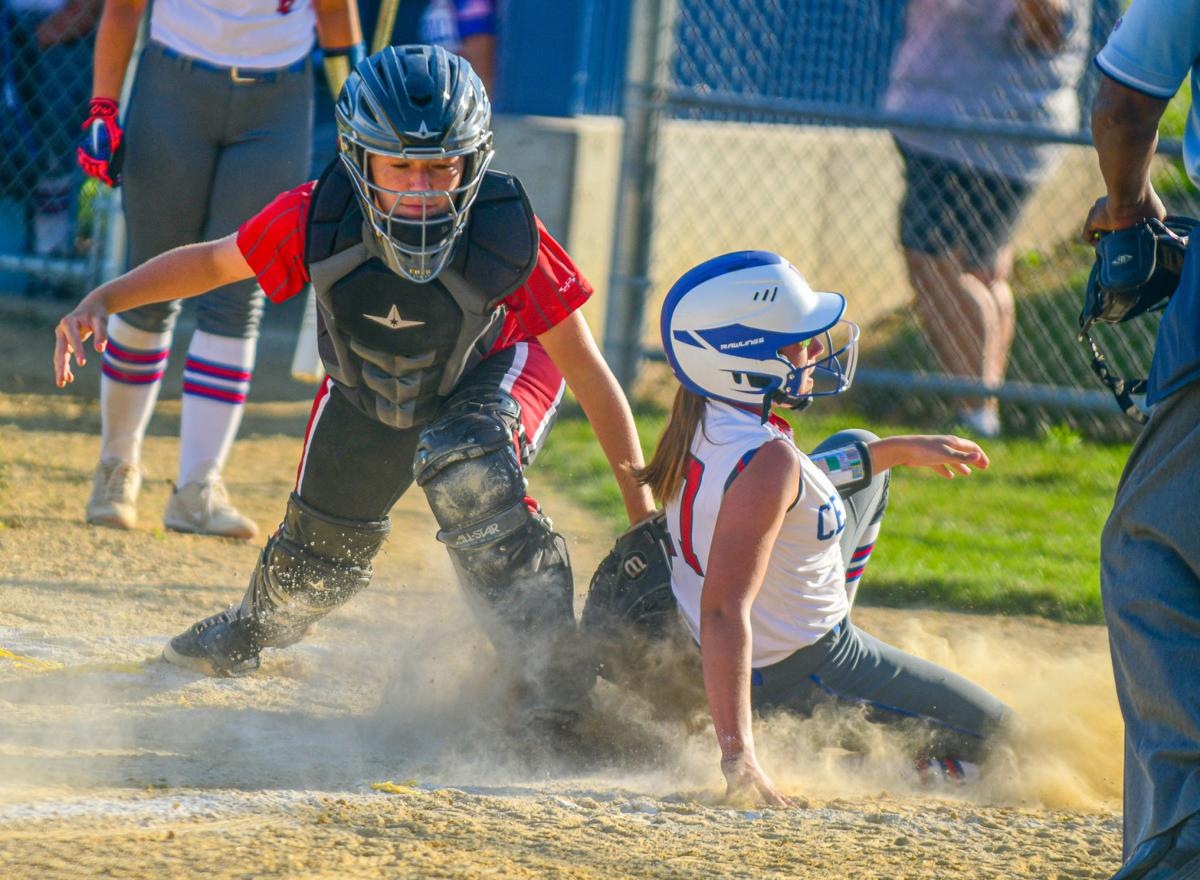 Clinton catcher Casy Mandrell tags out a Davenport Central runner at home, keeping the Blue Devils off the board in the first inning of Game 2 of the MAC doubleheader earlier this season. 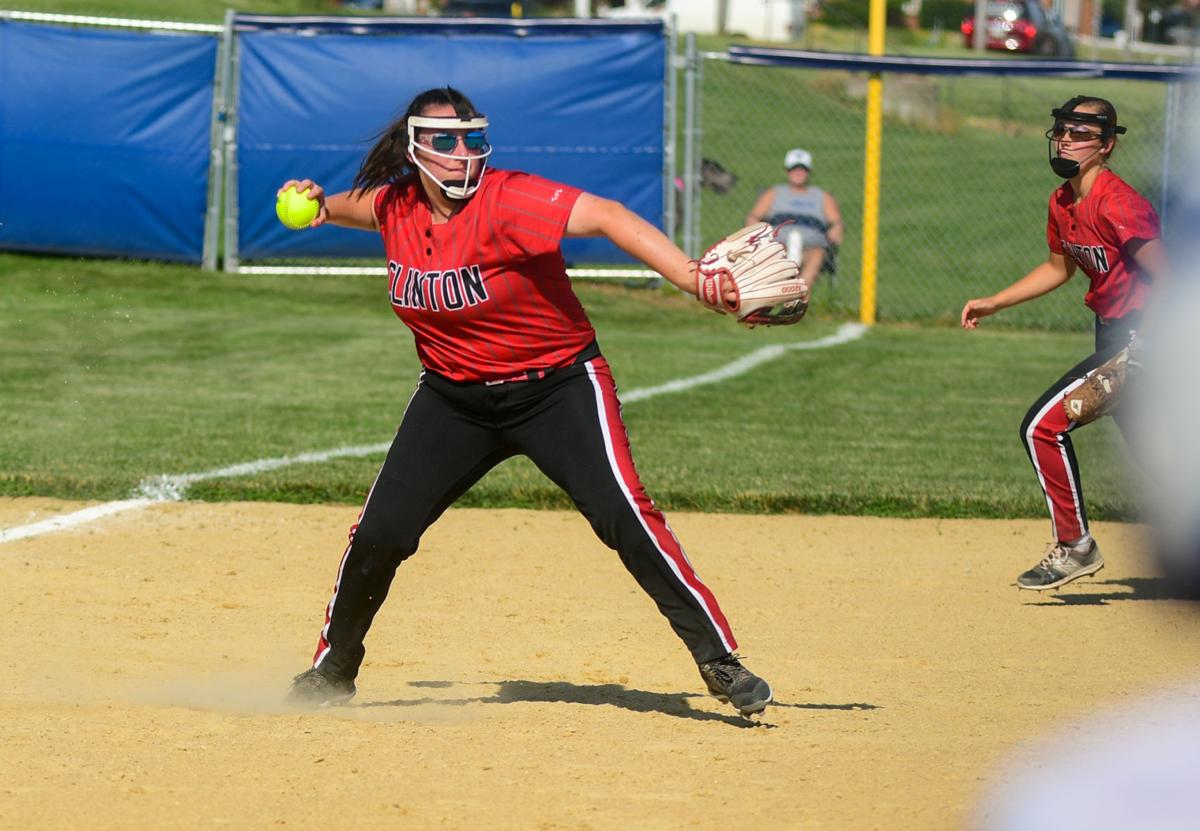 Clinton’s Madison Meggenberg looks to throw to first during the Queens’ first game against Davenport Central on Thursday. 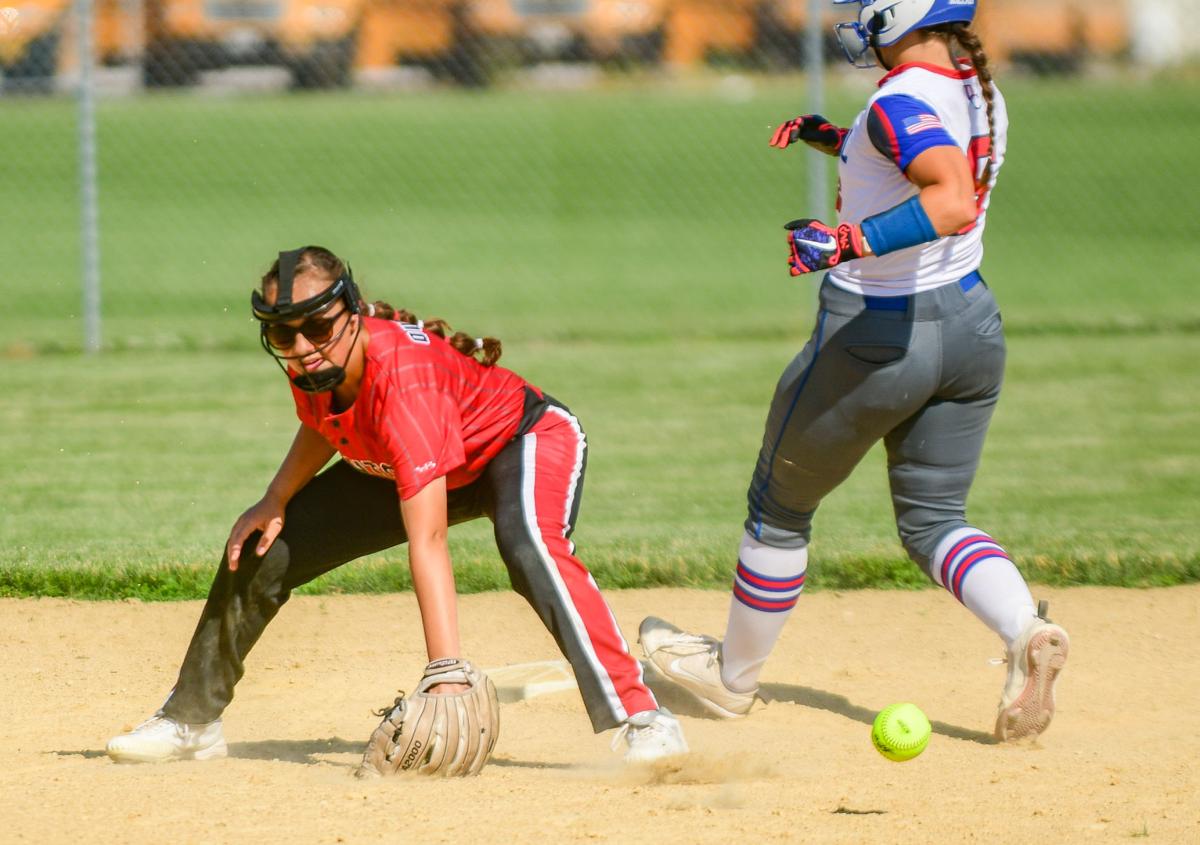 Clinton’s Amber Lee reaches for a throw that was made to her at second bade while a Central runner steals.

Clinton catcher Casy Mandrell tags out a Davenport Central runner at home, keeping the Blue Devils off the board in the first inning of Game 2 of the MAC doubleheader earlier this season.

Clinton’s Madison Meggenberg looks to throw to first during the Queens’ first game against Davenport Central on Thursday.

Clinton’s Amber Lee reaches for a throw that was made to her at second bade while a Central runner steals.

DAVENPORT – With a final snap to first base, the River Queens ran off of the softball field at Brady Street Stadium in celebration.

The final out gave them the complete doubleheader sweep of the Davenport Central Blue Devils, the softball team’s first Mississippi Athletic Conference wins of the season.

“We were consistent all over,” Clinton head coach Nate Herrig said. “Everyone participated tonight and that was big. They knew what they were supposed to do and they were ready.”

The River Queens held off a comeback effort to take the first game 6-5 and then blanked the Blue Devils 6-0 in the second game.

They jumped out to the hefty lead from the get-go. The River Queens plated two runs in the first and then kept their offense going. Makenzie Cooley started the fourth inning with a solo shot over the outfield fence, and then Emma Milder turned a single into an RBI. Milder ended up stealing second and third and scoring on a throwing error, giving the Queens a 5-0 lead.

The Queens ended with six hits, but had a lot of contact heading deep into the outfield.

“Anytime you can go up there and put the bat on the ball like that, get a good hit, it definitely builds some confidence. You’re not going out there hitting a weak fly ball or ground ball, it gives you confidence every time you’re up there.”

They held a five-run lead until the sixth. Lauren Brennan was the arm for Game 1, and with some fatigue the Blue Devils started to make contact with her strikes. After Central cut the 6-1 lead to 6-3, Herrig went to the circle for a chat with his starter.

“I just tried to get out there and get those kids to smile a little bit,” Herrig said. “Break up the monotony. I said listen, you’re still playing the game, play it like you know how and go on from there.”

Brennan came back out in the seventh and finished the game.

“We really battled in Game 1, we got ourselves out of a jam,” Herrig said. “Lauren [Brennan] came out and shut them down. She threw a lot of pitches tonight and shut them down really well. It was big. She stepped up, she showed her leadership and everybody picked her up there.”

Behind pitcher Natalie Dornbush in Game 2, the Clinton defense really shone bright. With two Davenport runners in scoring position in the bottom of the first, Madison Meggenberg hedged the throw just long enough to keep the runner on third. She then made the out at first, and Makenzie Cooley shot the ball right to the Glove of Casy Mandrell for the out at home. The heady double play ended the inning and avoided any runs for the Blue Devils.

Later in the game, Mandrell snapped the ball to third to catch a runner off base, another big play.

Clinton’s right fielder Rylee Wisor ran after a single and made such a quick throw back in that the Queens were able to catch the runner off base immediately.

The clean defense, along with Dornbush’s effort, helped them keep the Blue Devils off the board completely in the second contest.

“Those [plays] enabled us to get out of the innings,” Herrig said. “We had a great day of practice yesterday .. got them moving and I think that carried over to tonight.”

The Queens once more recorded six hits in the second contest.

The River Queens have the holiday weekend off, returning to action on Monday night with a twinbill against Davenport West at the Durgin Complex in Clinton.

“We started really tough,” Herrig said. The Queens played three ranked opponents in the first two weeks. “We got through our murderer’s row at the beginning, but we played some decent ball. That was big, we’re getting the confidence and the experience, we’re not as sloppy as we were. Our age is not as much of a factor as it was two weeks ago.”