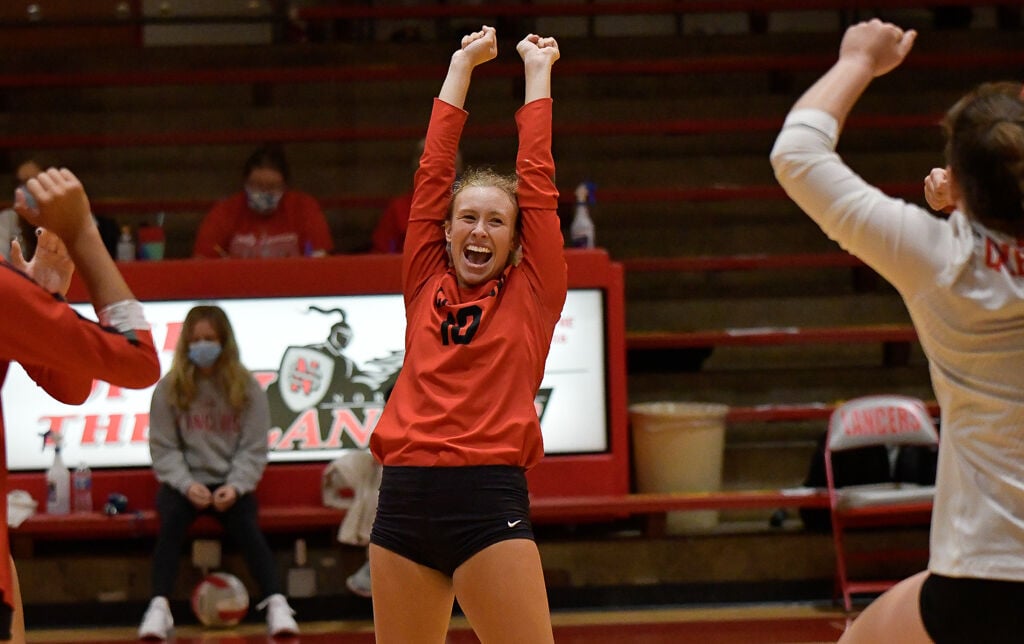 Clinton’s Jamie Greenwalt (No. 10) celebrates after a play on Sept. 12 in Eldridge. 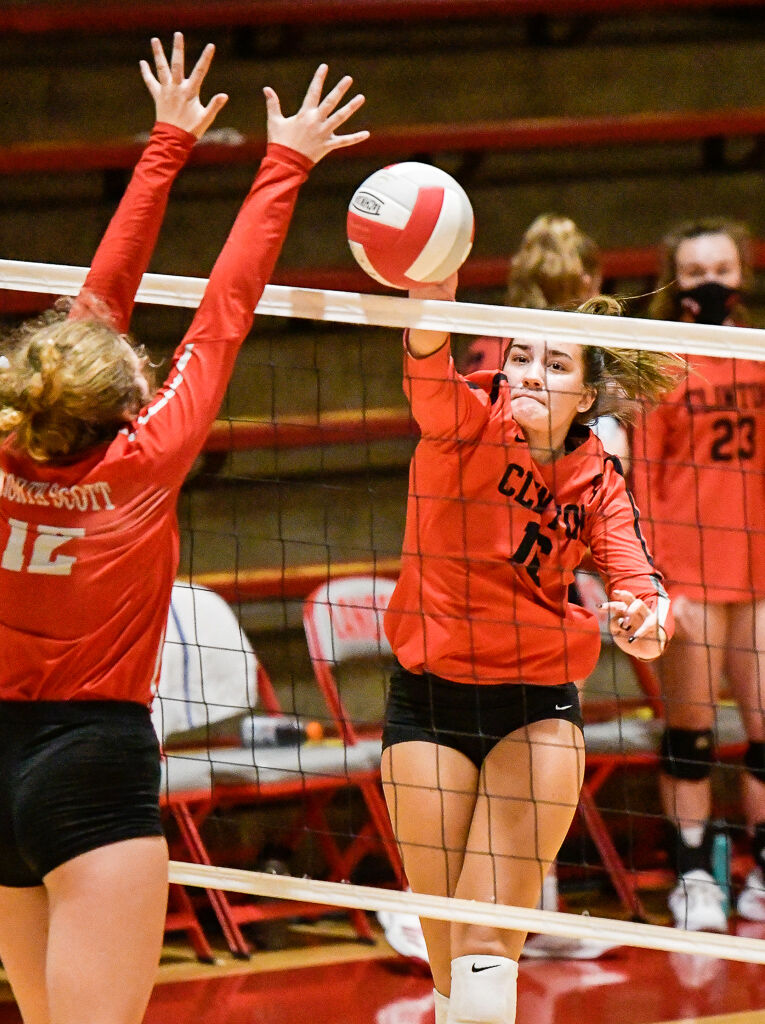 Clinton’s Kailyn Graves (right) sends a ball over the net on Sept. 12 in Eldridge. 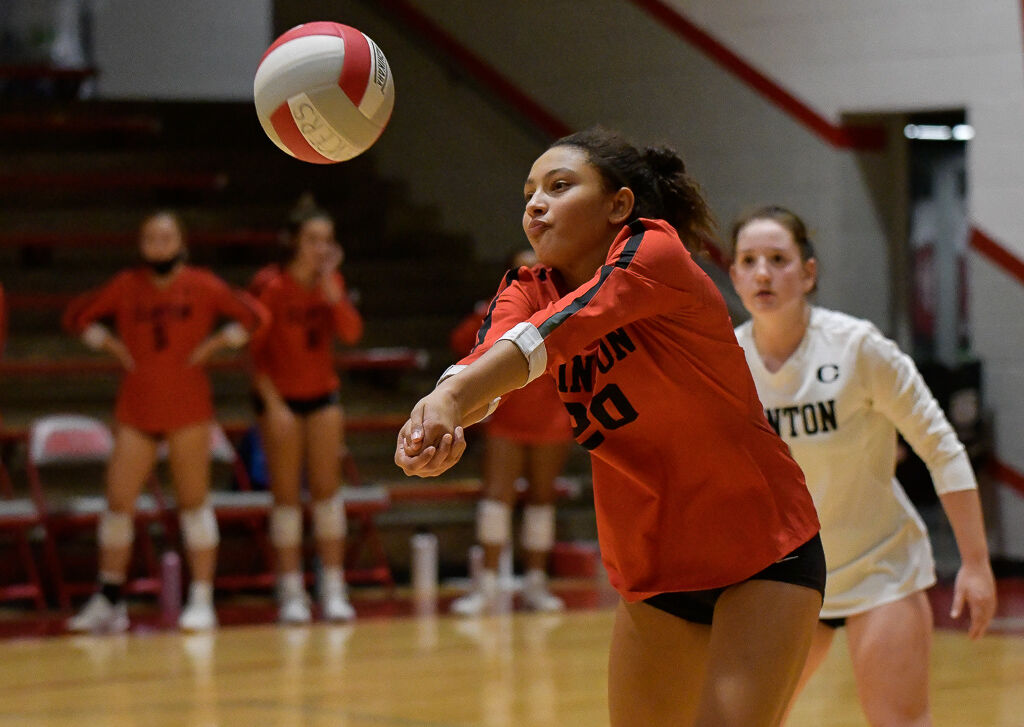 Clinton’s Makayla Howard (No. 20) competes on Sept. 12 in Eldridge.

Clinton’s Jamie Greenwalt (No. 10) celebrates after a play on Sept. 12 in Eldridge.

Clinton’s Kailyn Graves (right) sends a ball over the net on Sept. 12 in Eldridge.

Clinton’s Makayla Howard (No. 20) competes on Sept. 12 in Eldridge.

ELDRIDGE – The Clinton volleyball team entered into Saturday’s North Scott Invitational with just one win on the season. On paper, it looked like that’s all they were going to get from the six-team tournament.

They didn’t settle for what was expected, though.

“Our goal was to get three wins today,” Clinton head coach Micah Cewe said. “Anyone outside of our team would say we’re supposed to go 1-4. For our girls to flip that, I can’t say how incredibly proud I am of their effort.

“It wasn’t about height or anything like that, it’s all about heart.”

The River Queens surprised the entire tournament by rolling to a 4-1 record on the day, taking down three top-six teams in the process.

Clinton was joined by Davenport West as the only two unranked teams featured at the Lady Lancer volleyball tournament in Eldridge this weekend. Rounding out an impressive lineup was Class 4A No. 1 Xavier, Class 4A No. 2 Western Dubuque, Class 4A No. 6 North Scott and Class 3A No. 5 Union.

Clinton’s only loss came to the No. 1 Xavier Saints.

Xavier’s roster featured height not commonly seen in high school volleyball, and the block sent the River Queens into pandemonium. The first three attack attempts were blocked right back to their side of the court.

The flustered Queens fell 21-11 in the first set, but came storming back. Creative swings and setter pushes kept the volleyball out of the hands of the Saints. More importantly, the scrappy back row dug up everything thrown their way and made saves that surprised Xavier on the other side of the net.

“A team like that, we know we can’t outhit them,” Cewe said. “We have to play better defense. At times we did.

“We have a senior-laden group committed to playing defense. Our first line of defense is our block, and it’s not the strongest and we know that. Our second line, our back row, all of them really commit and are scrappy. They don’t want that ball to fall.”

The Queens didn’t have quite enough in the last match of the day, also missing kill-leader Makayla Howard in the last set. They fell 24-22.

Although they missed out on the sweep, they downed the No. 2 Western Dubuque Bobcats to kick off their winning spree. They followed that up with a sweep of Union and then avenged a regular season loss with a 3-set battle with the Lancers.

The victories were a little surprising after a sluggish start in the A.M. The Queens downed Mississippi Athletic Conference opponent Davenport West 21-11, 21-14 to kick off the day but were disappointed in the play they saw.

“We kind of played at 50-75 percent and still got by, and that’s the wrong mindset,” Cewe said.

They wanted to see more, and they did.

“The level of competition we saw got better as we went,” Cewe said. “We knew we had to raise that bar every single game. We need to find a way to play at that bar all the time.”

Makayla Howard led the Queens in kills on the day with 37. Makenzie Cooley added 22 more from the middle and Elle Davis put away 13.

Libero Rylie Mussman impressed all day defensively and finished with 32 digs, followed by 22 from Jamie Greenwalt and 21 from Lexy Lemke.

Greenwalt impressed for the Queens from her spot as setter. She had her digs and added six service aces, 11 kills and 82 assists.

The River Queens are back in action on Tuesday. They’ll take on Davenport West once again, this time in a best-of-five MAC game at Yourd Gymnasium.

“It’s a confidence booster,” Cewe said. “If they don’t gain confidence from this then we have some other issues to tackle. They did everything we asked and more today.”