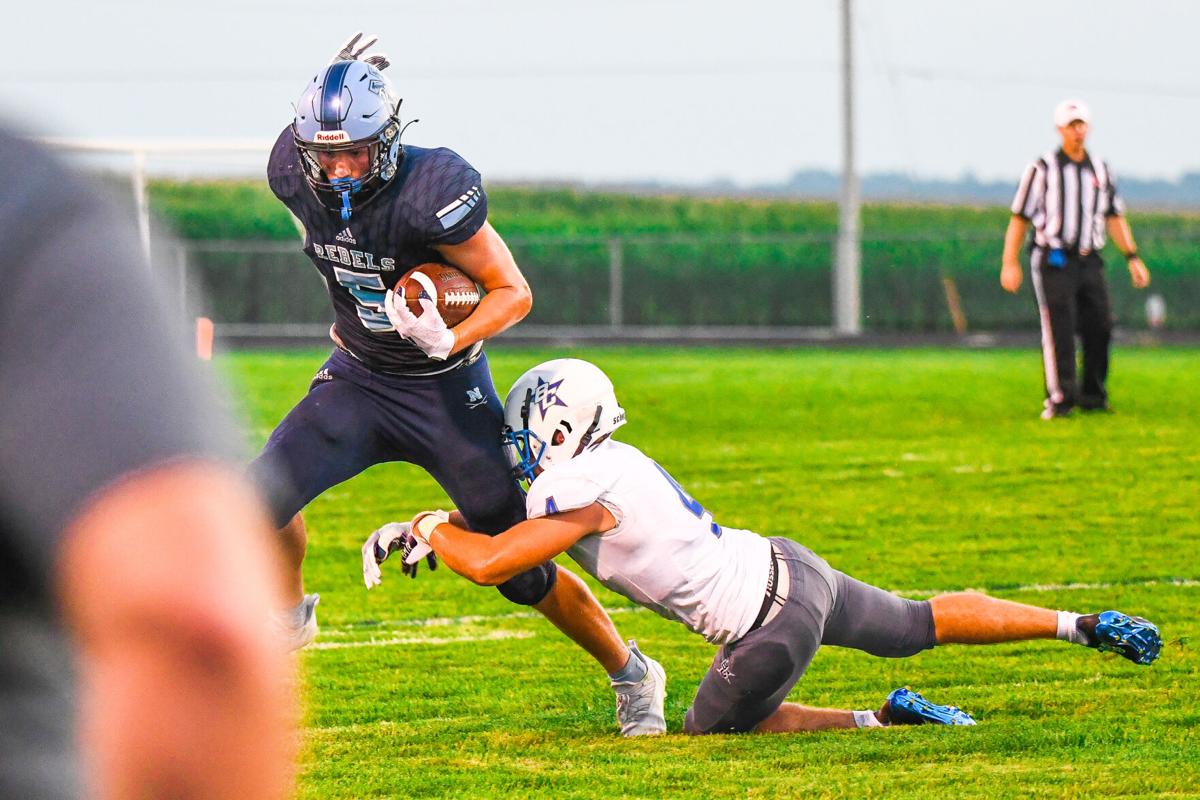 In this Herald file photo, Northeast senior Cade Hughes tries to avoid a tackle on a run during the Rebels’ game against Bellevue in Week 1 of the football season. 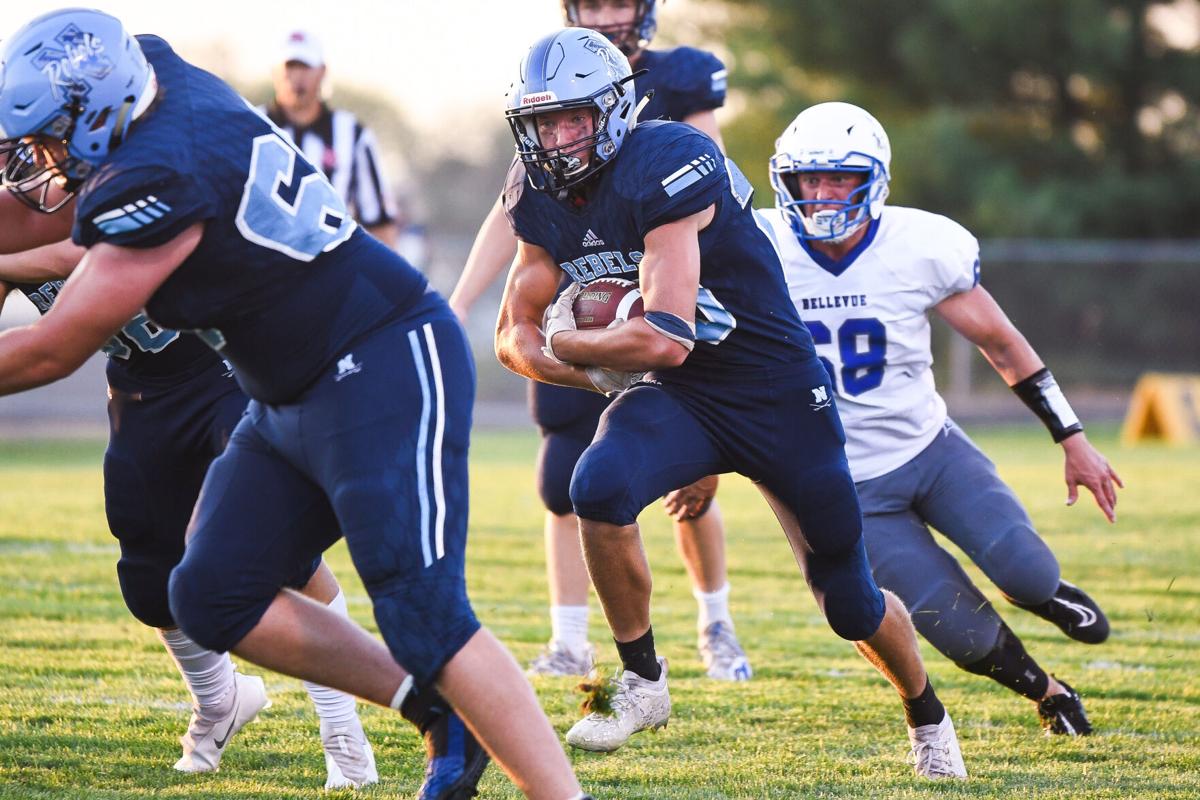 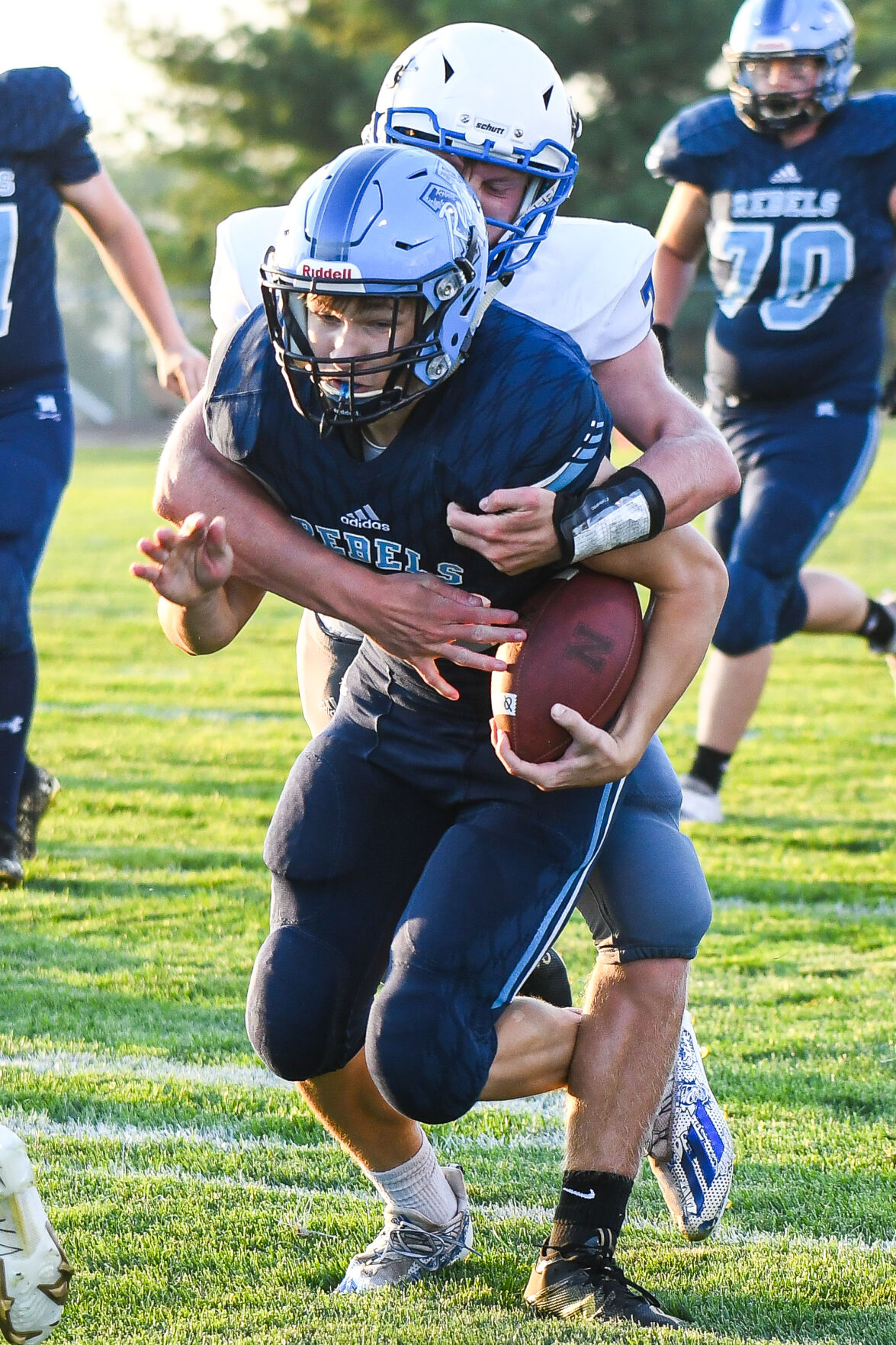 Carie Kuehn/Clinton Herald In this Herald file photo, freshman Gavin Kramer is brought down on a run during the Rebels’ game against Bellevue earlier this fall.

In this Herald file photo, Northeast senior Cade Hughes tries to avoid a tackle on a run during the Rebels’ game against Bellevue in Week 1 of the football season.

Carie Kuehn/Clinton Herald In this Herald file photo, freshman Gavin Kramer is brought down on a run during the Rebels’ game against Bellevue earlier this fall.

GOOSE LAKE – The last time the Northeast football team saw playoff competition (minus the automatic game in 2020 due to coronavirus) was in the fall of 2009.

That’s going to change after the Rebels ensured their spot in the 2021 playoffs with a win last Friday.

Northeast has won four straight, including going 3-0 so far in Class 2A District 5 play. Their win on Friday at West Liberty verified they’ll finish high enough in the district to be a playoff team.

It’s been a process, but the lineup on the field on Friday nights in Goose Lake has learned how to win. The group is full of seniors who have multiple years of varsity experience in numerous sports already on their resume.

Not only that, but they’ve learned how to be on the right end of a close game. The Rebels actually started the 2021 season 0-2, losing by just one touchdown to Bellevue and losing in overtime to Wilton. That’s helped them with four straight wins, including one overtime and two by three points or less.

“The biggest difference I would say in those games is the experience we had earlier in the year with them,” Hughes said. “ sS a team, we’re learning how to win those close games.”

The experience is really showing on the offensive end for the Rebels. Hughes is a leading receiver for Northeast and has been in the position since he was an unerclassman. He has 530 receiving yards on the year on 33 catches.

Senior Carter Pataska has another 250 and senior Ty Hudson adds 100.

Senior Caleb Gruhn has rushed for over 200 yards this year as well.

“The strength we have on offense is all the weapons we have,” Hughes said. “There isn’t just one guy that is capable of making a play. When teams try and stop one or two of us we have still have other playmakers open.”

The offense has been nothing short of impressive. Along with the returning athletes, the roster has added freshman quarterback Gavin Kramer this season. Even though he walked into a seasoned roster, he’s quickly made his impact known.

“It was difficult at first,” Kramer said. “However, I have a great group of guys around me who have given me the confidence I have now. They help me get better every single day.”

Kramer is the team’s leading rusher with 575 yards. That’s added to his 1,019 passing yards so far this season.

Kramer has plenty of looks when he gets the snap.

“I can’t pick one thing,” Kramer said. “This offense is extremely well rounded. We have very talented guys at every position that work hard and work well together.”

Their speed aids them on the offensive side and on the defensive side of things, too. Full of state track athletes, the team has 11 interceptions so far this year from seven different athletes. They’ve also recovered seven fumbles, one for a touchdown.

“Our strength on defense would be our speed,” Hughes said. Hughes leads the team with 41 tackles, six of them for a loss. “Our defense is capable of flying around the field and making plays.”

Clayton Meyermann had 31 tackles, Carter Pataska has 28 and Grant Gray adds another 20 to the equation. consider the four sacks and 19 tackles for a loss and the Rebels have created a force to be recokoned with.

The experience helps, but the program also got a big shift in 2019.

“I would say the biggest difference between this year compared to other years is as teammates we’re a lot closer together,” Hughes said. “We’ve also been lucky enough to bring in coaches who have shared a lot of knowledge about football.”

It’s been an exciting year for Northeast fans and students alike, but it’s not over. The Rebels have two home games left to play and they may offer some of the bigger challenges.

They welcome local rival Camanche on Friday night. The Storm-Rebel matchup is a favorite every year and the Storm have just one loss in the district so far.

The Rebels wrap up the season against Monticello, who just beat Camanche by over 40 points. The Panthers are also undefeated in the district.

“We know that our toughest games are still ahead of us, but we know we can compete in those games and come out with wins,” Hughes said. “We’re playing really good football right now but there is always still room for improvement.”

The Rebels are playing with confidence, and rightly so. It’s been a long time coming and they’re ready to see where the next steps take the team.

“This team is hungry,” Gavin Kramer said. “We are working hard to get better every day so we can compete every single game.”