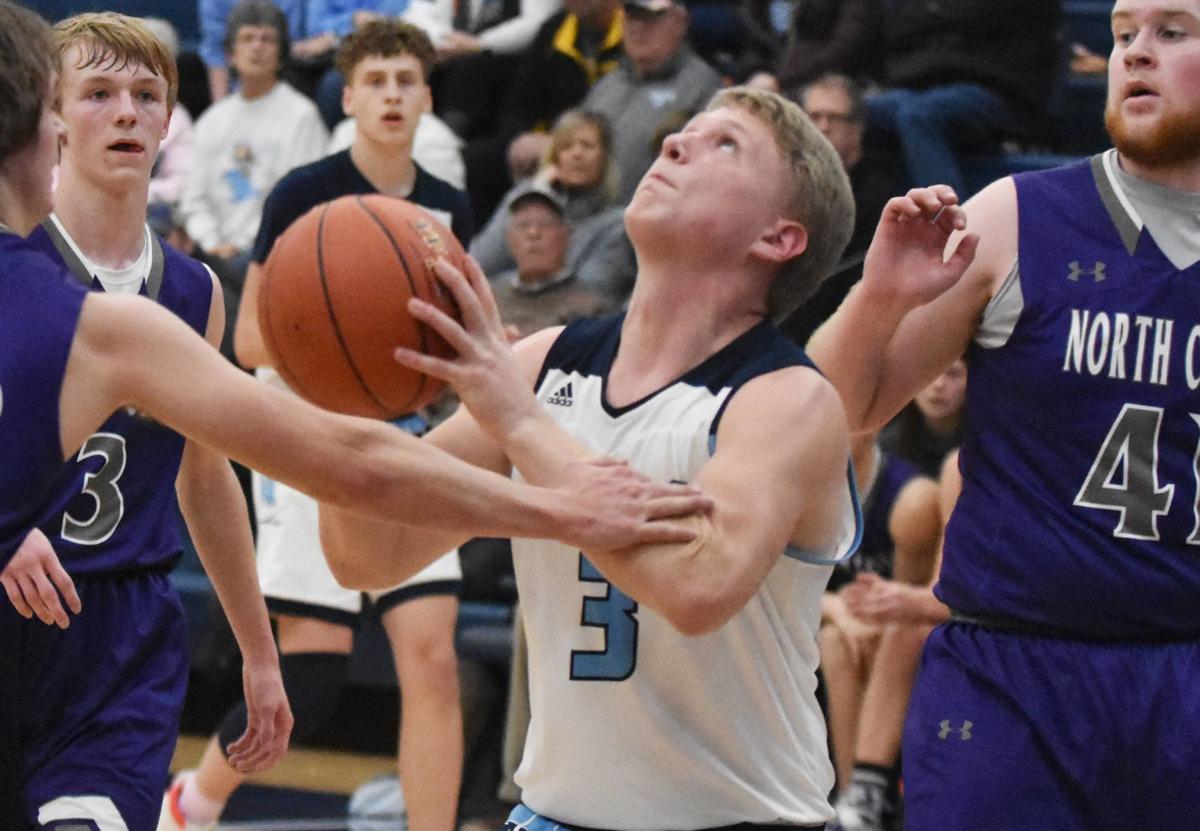 Northeast senior Dakota Stevenson looks for a shot while under the basket during the Rebels’ game against North Cedar. 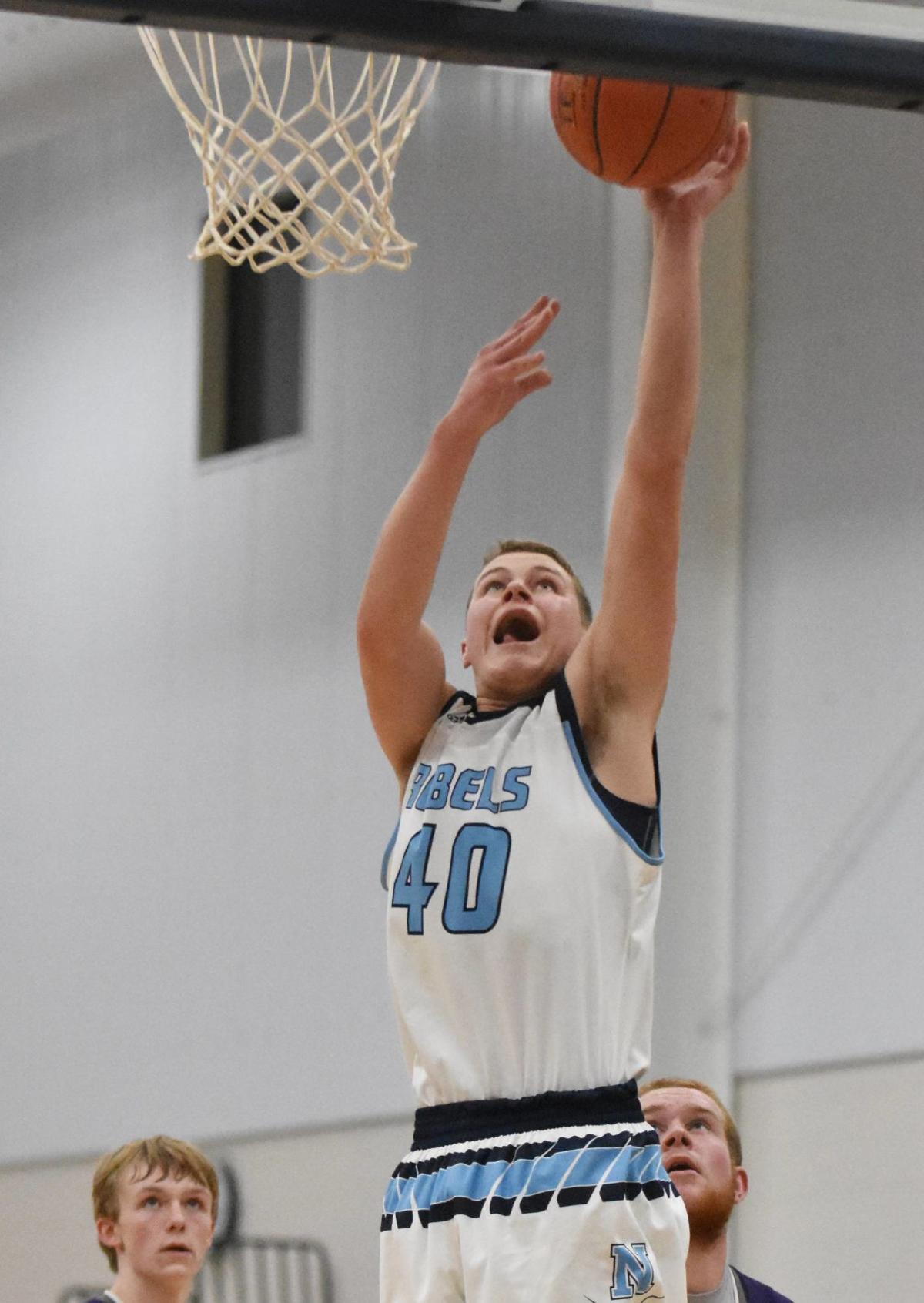 Northeast’s Judd Swanton puts up a shot from the block during an earlier home game for the Rebels.

Northeast senior Dakota Stevenson looks for a shot while under the basket during the Rebels’ game against North Cedar.

Northeast’s Judd Swanton puts up a shot from the block during an earlier home game for the Rebels.

The Northeast boys basketball team hasn’t had any breaks this entire season. It doesn’t get much easier over the next few weeks, either.

The Rebels (10-5) face tough opponents in their last six regular season games. First is No. 4 ranked Camanche on Friday, who beat them by nearly 20 earlier this season.

They have a quick turnaround and go on the road to see a 9-6 Durant team Saturday afternoon. They’re right back at it on Tuesday night, heading to Monticello. The Panthers beat the Rebels earlier his month 48-33.

Their offense has been looking for consistency all year. Their roster offers plenty of athletes capable of stepping up, things just have never clicked at the right time.

After a three-game losing streak, the Rebels picked up three quality wins to lead them into this next stretch of games.

“These games build the confidence,” first-year head coach Brandon Hansen said after their win over West Liberty on Monday. “Hopefully that springboards them to drive to the basket more instead of settling for jump shots. That’s what we’ve been stressing: get to the basket more.”

They’re definitely capable. The leading scorer switches between players from game-to-game. Six of the Rebels are averaging over five points, with four of them averagine between eight and ten.

That gives them plenty of options when it comes down to it.

“We’re all confident,” senior Dakota Stevenson said. “Any of the starting five can put up 10-plus. Anyone off the bench can score 10-plus. We don’t care about who scores, we just want to win games.”

It’s still been a process. The Northeast lineup has changed drastically over the last three seasons, and Stevenson has been there for all of that. He played as a sophomore, along with guard Trey McAleer.

On that team in 2017-2018, the Rebels had forwards Lucas Empen and Braeden Hoyer and things were very focused around the play in the paint.

After Empen graduated, Hoyer and the rest of the lineup moved to a more speedy style of play, but Hoyer still offered that powerful post position.

This year is the first without head coach Travis Eversmeyer, who coached for a decade. They’ve also moved to an even more guard-heavy lineup.

“When we were younger, [Travis] Eversmeyer developed us in feeding the post,” McAleer said. “Our games have really evolved to where we can attack off the dribble, set screens for each other and get open shots. We’ve just evolved as players and gotten more comfortable.”

They’re taking plenty of smart shots, with four of their top five scorers shooting over 35 percent from the field. Plus they have the outside threat especially from Stevenson, who is averaging 42 percent from beyond the arc.

“We know almost every game we step on the court we’re the smaller team with a smaller lineup,” guard Grant Rickertsen said. “It turns into a mental game.”

They’ve done plenty of work on those attacks to the rim, showing off their speed and athleticism. Plus, the work of Judd Swanton in the paint has helped makeup for some of that height.

Rebounding and post defense has been an area where they’ve struggled so far this year. The Rebels have one of the better perimeter defenses in the conference, but need to find more consistency in the paint as well.

“It’s a mind set thing,” Stevenson said. “If you want the ball, you have to go get it.”

The Rebels have all the tools and have proved capable, they’re just looking for everything to come together and preferably before district play kicks off in late February.

They made an appearance in the honorable mentions of the Class 2A state rankings, but fell out of them after losses to Camanche and Regina. That doesn’t bother them much.

Instead they’re focused on a top-five team and two honorable mentions in their schedule before the end of the year. They want to prove they can beat those teams, and then continue it into the postseason.

“We need to forget about what people say and focus on what we need to do every night,” McAleer said. “We need to figure out how to play together and beat these good teams.”