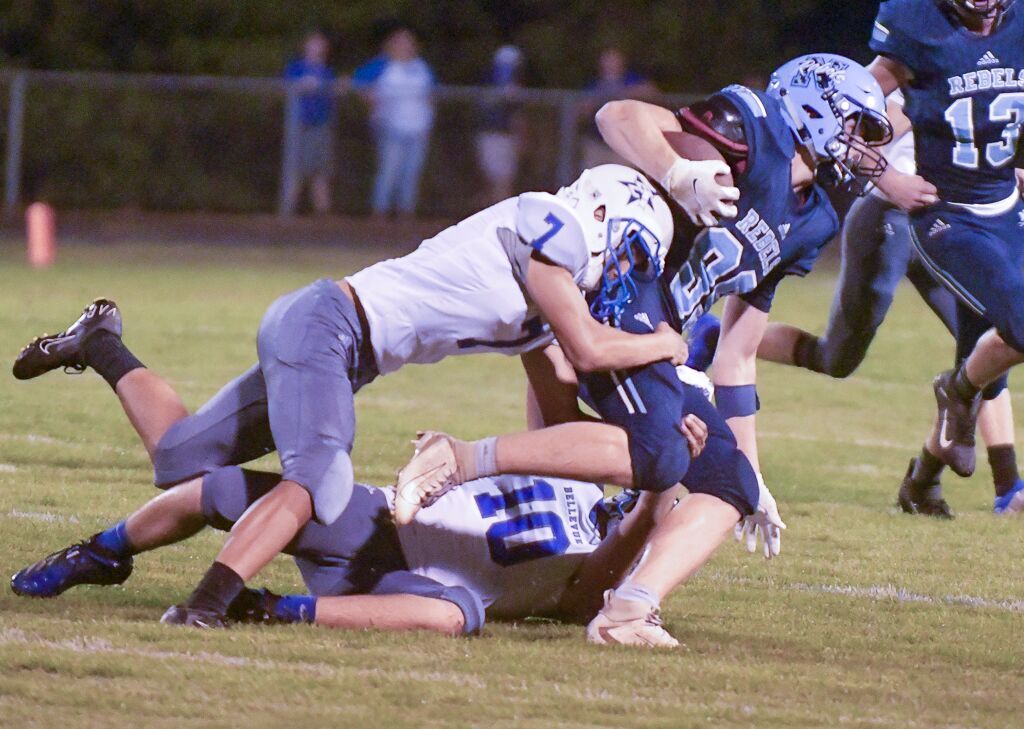 Northeast’s Ethan Snyder gets taken down after breaking away for a first down late in the fourth quarter of the Rebel’s season opening loss to Bellevue on Friday night. 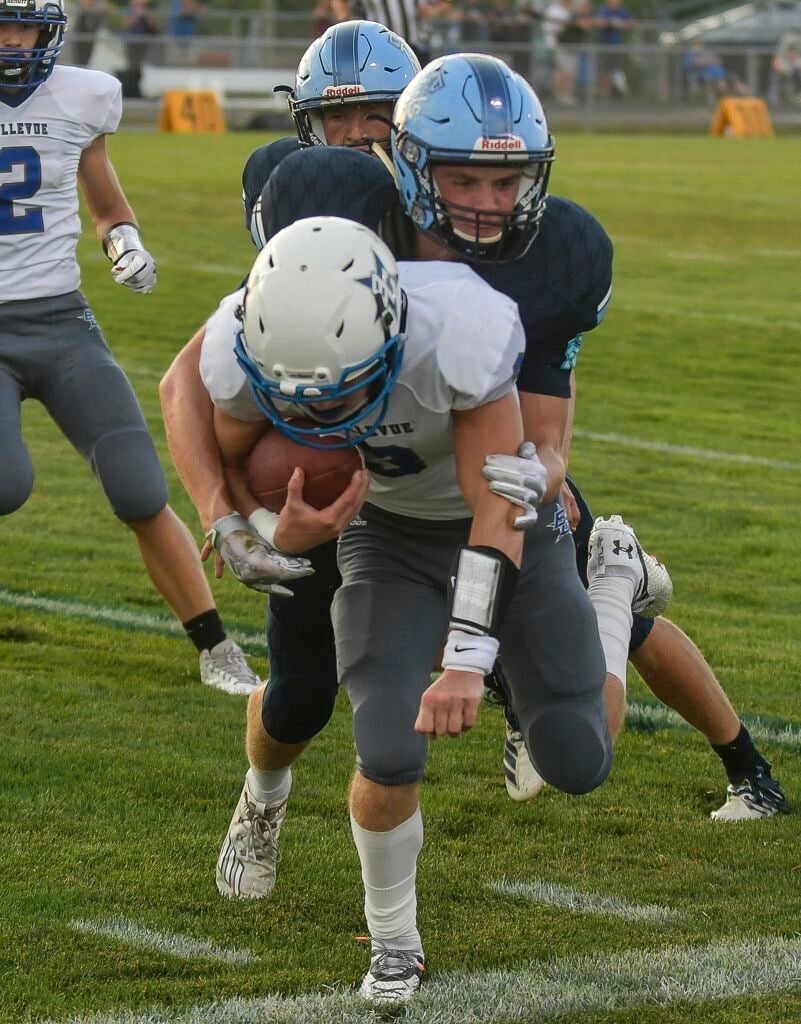 Northeast’s Ty Hudson makes a tackle at the sideline during the first quarter of the Rebels’ 41-0 loss to Vellevue. 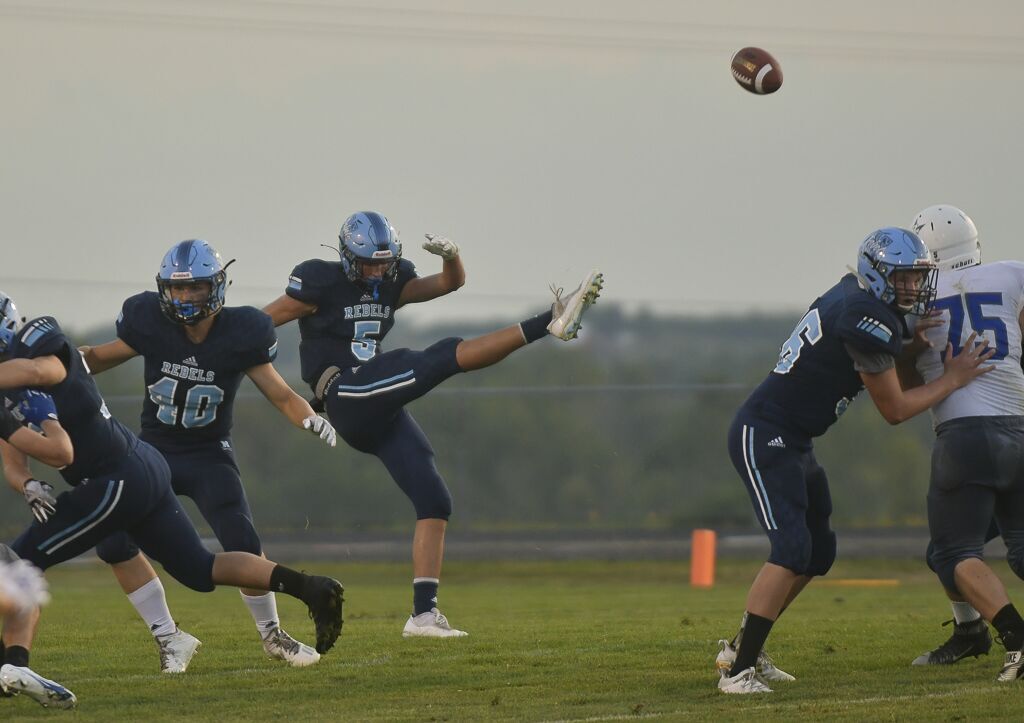 Northeast’s Ethan Snyder gets taken down after breaking away for a first down late in the fourth quarter of the Rebel’s season opening loss to Bellevue on Friday night.

Northeast’s Ty Hudson makes a tackle at the sideline during the first quarter of the Rebels’ 41-0 loss to Vellevue.

GOOSE LAKE – Northeast head football coach Mark Lee had one thing to say to his team after they were blanked 41-0 in the first football competition of the week: Everything is fixable.

“Obviously there were a lot of mistakes that were made tonight,” Lee said. “They were just unsure of themselves in certain situations. They have to be willing to fix those and get back on the right track.”

The Rebels struggled to hold back a Bellevue team through the first half, falling behind quick. The Comets scored on the first five drives, adding a mix of runs and passes to move right through the Rebel defense.

“They were there, we just need to make the plays,” Lee said.

Pair the defensive miscommunications with a stagnant offense and the Rebels trailed 34-0 by the time halftime rolled around.

“There’s a lot of inexperience on the line,” Lee said. “We have a lot of work to do on the line. We’re young and we kind of got thrown to the wolves tonight. We can preach it, but that’s hard to duplicate in practice.”

Still, they came out of the break with a new fire lit. The Rebels forced a three and out on the first possession, their first defensive stop of the game.

“We just tried to get them fired up at halftime,” Lee said. “I don’t know what it takes for kids nowadays to get fired up. We were there – even in the first half – we just needed to make the plays. Tackling and reading what we need to up front.”

They still had little offensive movement and turned the ball back over the Comets. Bellevue got a big run and Northeast added a facemask to put them within striking distance once more. This time, the defense stepped up again and forced a fumble, recovering it on their own 11-yard line.

Although they couldn’t capitalize, it was a sign of good things on the field.

The Comets scored once again to throw the clock into continuous time. On the Rebels last possession of the contest, they gave Cade Hughes the ball in the backfield. Hughes launched a ball to Ethan Snyder, and Snyder pulled it down for the Rebels’ first first-down of the game.

A series of runs and short passes, many between Snyder and Hughes, moved the Rebels into Comet territory for the first time that night. They made it to the 11-yard line, where they set the ball to the corner of the endzone twice. Each time, it went over the hands of the receiver and time ran out before a third attempt could be launched.

It was a tough start to the season for an inexperienced and youthful Northeast squad. Lee was missing a few kids from his roster due to injury.

“It hurt us, not having those guys in some key spots,” Lee said. “It was a beating. We preach doing your job .. and they need to understand that and trust in their teammates to do their job.”

The Rebels (0-1) are back in action next Friday night, traveling to North Cedar for Week 2.

MOUNT VERNON – The Indians put up a fight but couldn’t muster enough late energy to catch up to Mount Vernon, falling 28-14 in their season opener on the road.

After the Mustangs put a TD on the board, Cade Everson worked into the end zone with just over a minute left in the first quarter.

Mount Vernon scored the next two times before Camanche got another one across. The second score for the Indians came on a pass from Jordan Lawrence to Eric Kinkaid in the middle of the third quarter. The Indians never got closer than 7 points.

DEWITT – Although it wasn’t the opponent they were expecting, the Central DeWitt Sabers picked up their first win of the season with a 14-7 victory over Ottumwa on Friday night.

The Sabers struck quickly and held on to the lead throughout. They started on the 43-yard line on their first drive and Garrett Sailor topped everything off with a 31-yard touchdown run to pu the first points on the board.

They scored again before Ottumwa put points on the board, this time from a sailor again with an 8-yard run. Sailor had 91 yards in the first half off of ten carries.

Ottumwa put their only score on the board in the second half.

Central DeWitt (1-0) stays at home for next week’s contest, welcoming Davenport West to their home field.