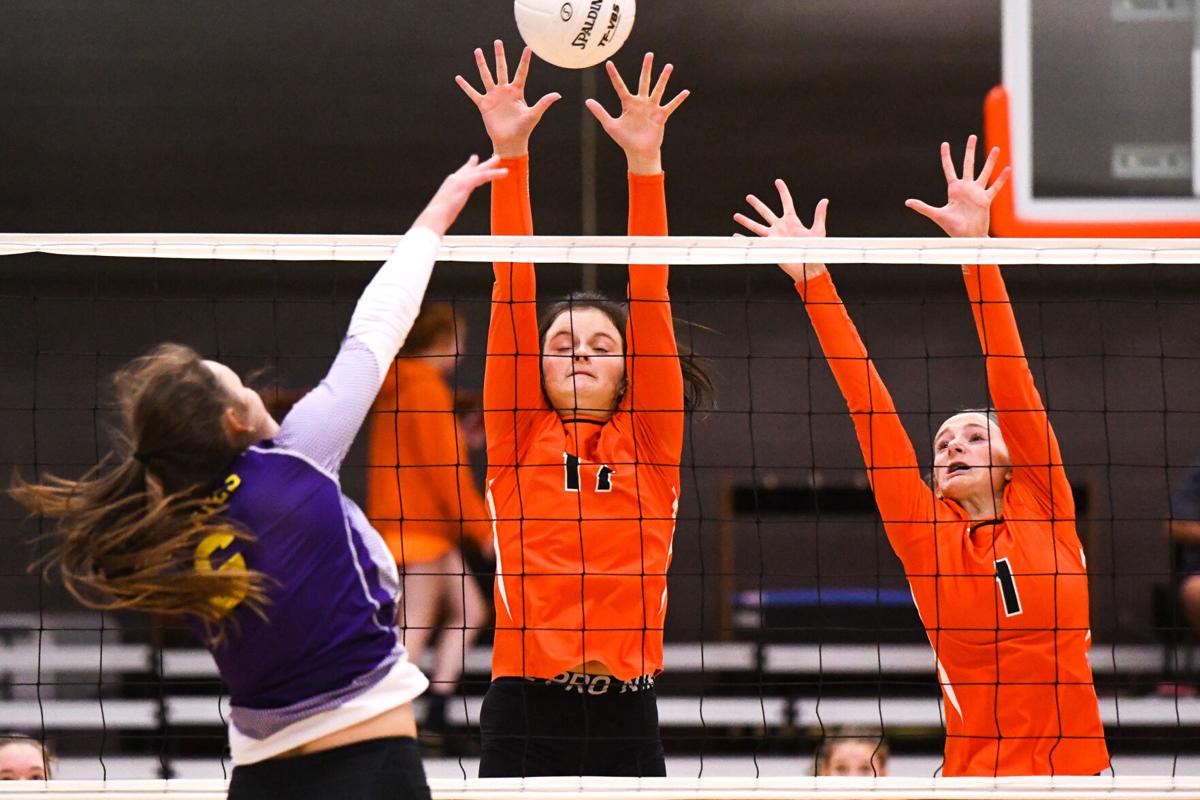 In this Herald file photo, Easton Valley seniors Aleah Johnson and Renee Hartung jump for a block during a regular season home game. 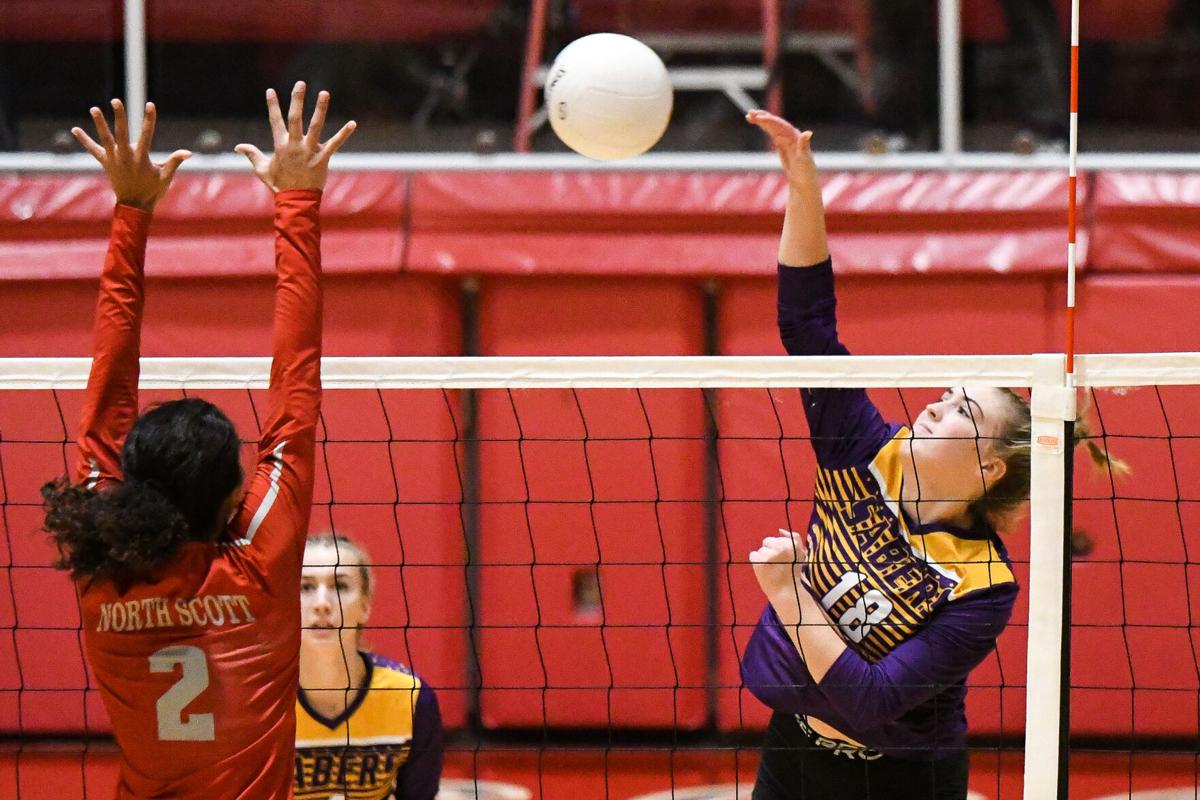 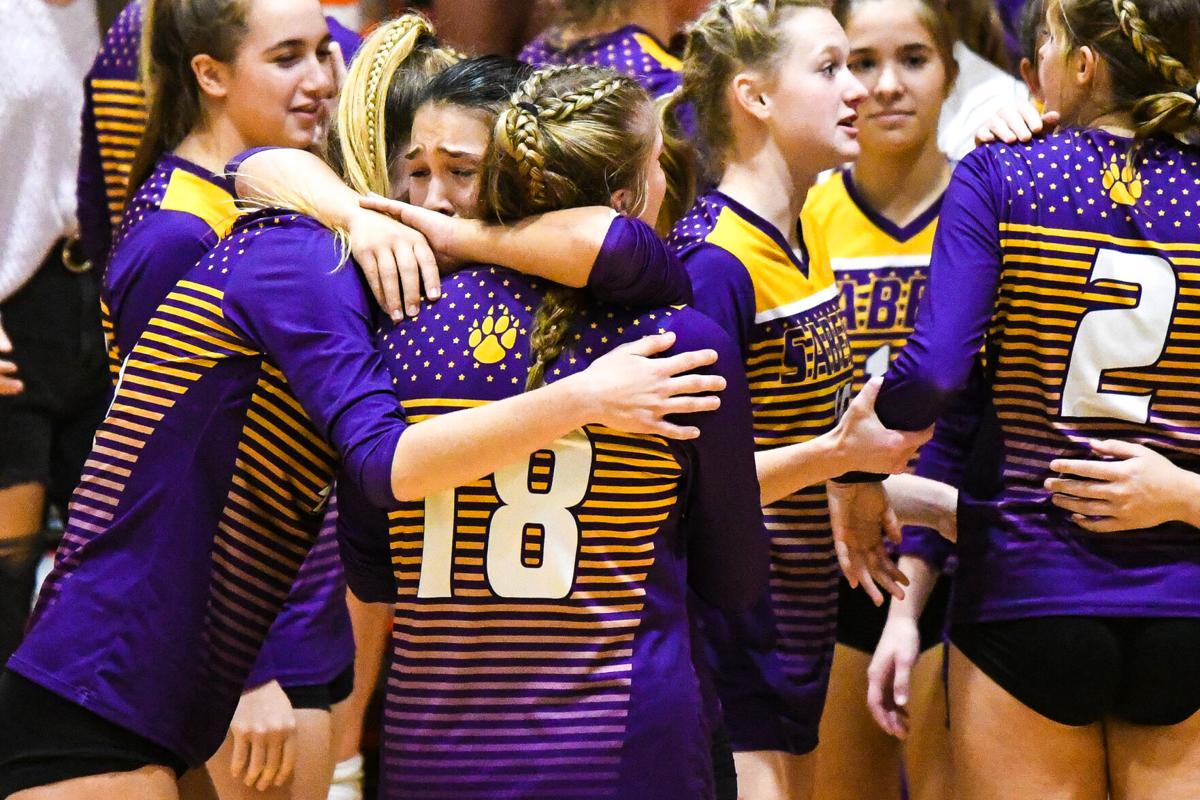 In this Herald file photo, Easton Valley seniors Aleah Johnson and Renee Hartung jump for a block during a regular season home game.

MUSCATINE – A postseason run ended on Tuesday night for the Easton Valley volleyball team with a three-set loss to the No. 1 ranked Nikes of Burlington Notre Dame in Muscatine.

They continued that momentum into Set 2, jumping to a 12-6 lead with the help of a couple of serves dropping on the Easton Valley side of the court. They rolled in that set as well.

The River Hawks found some fight in the third set and stayed competitive through parts of the set, but the No. 1 ranked Nikes ended up bring too much for the unranked River Hawks. The loss ended their season down by eight in the third and final set.

The River Hawks end their season with a 21-9 record in the regional final after beating Maquoketa Valley, Cedar Valley Christian and Central City in the Class 1A postseason.

ELDRIDGE – With hugs and tears, the Central DeWitt volleyball team ended their 2021 postseason on the floor of The Pit in Eldridge.

The Sabers fell in the Class 4A regional final to No. 2 ranked North Scott, one game away from the state tournament. The 3-0 sweep ended a campaign the senior-laden Sabers were proud to be a part of.

“This says that they’ve worked hard,” head coach Lee Swanson said. “We have some great leaders in our senior class, some great athletes. For this class, being here was great.”

Both the first two sets started the same ways. The Sabers came out slow and watched the Lancers rattle off unanswered point after unanswered point – many off of the Sabers’ own mistakes rather than the Lancers’ attack. There were nine total hitting errors and two serving errors through the three sets on the Saber side of the net.

It put them in a hole early in both sets.

“We just could not play 0-10 today,” Swanson said. “And then you get behind and the energy deflates. This is a tough place to play – they come at you from everywhere.”

A kill by Isabelle Pierce in Set 1 marked the first side out for Central DeWitt, but they were already down 5-1. Some kills from Ava Morris and some scrappy play helped the Sabers inch their way back. They pulled within five, a 19-14 lead for North Scott, and it looked like a comeback was imminent. Morris led the Sabers with a team-high five kills.

The Lancers came back with three straight points and finished the game out from there.

They rolled in the second set, jumping to a 19-6 lead after four consecutive bad serve receives from the Sabers.

“Once we made a bad pass or something didn’t happen right, it got in our heads a little bit,” Swanson said. “As far as serve receive, we worked on it. Our scouting report was dead on. We knew we had to pass the ball and we just didn’t.

“When we did pass the ball we played with them. It just didn’t happen very often.”

Near the end of the second set though, the block on the outside started finding the right position. That momentum carried into the third.

“I think with the speed of their game, we have to play them man up,” Swanson said. “I think we were getting lost in the shuffle in the beginning, the first game and a half. We started communicating better and getting where we needed to be.”

Central DeWitt did end up with 10 team blocks – three of them came from middle Elaina Schroeder.

With the help of the new-found net play, the third set started much differently than the first two. Instead of falling behind quickly, the game was tied 5-5 within a few minutes.

However, the Lancers rattle doff 11 straight and outscored the Sabers 20-5 to end the set and the game.

That left the Lancers advancing to the Class 4A state tournament.

“It was a good season,” Swanson said. “It’s been a long time since we’ve been here. The foundation is good – being here is great for this class.”