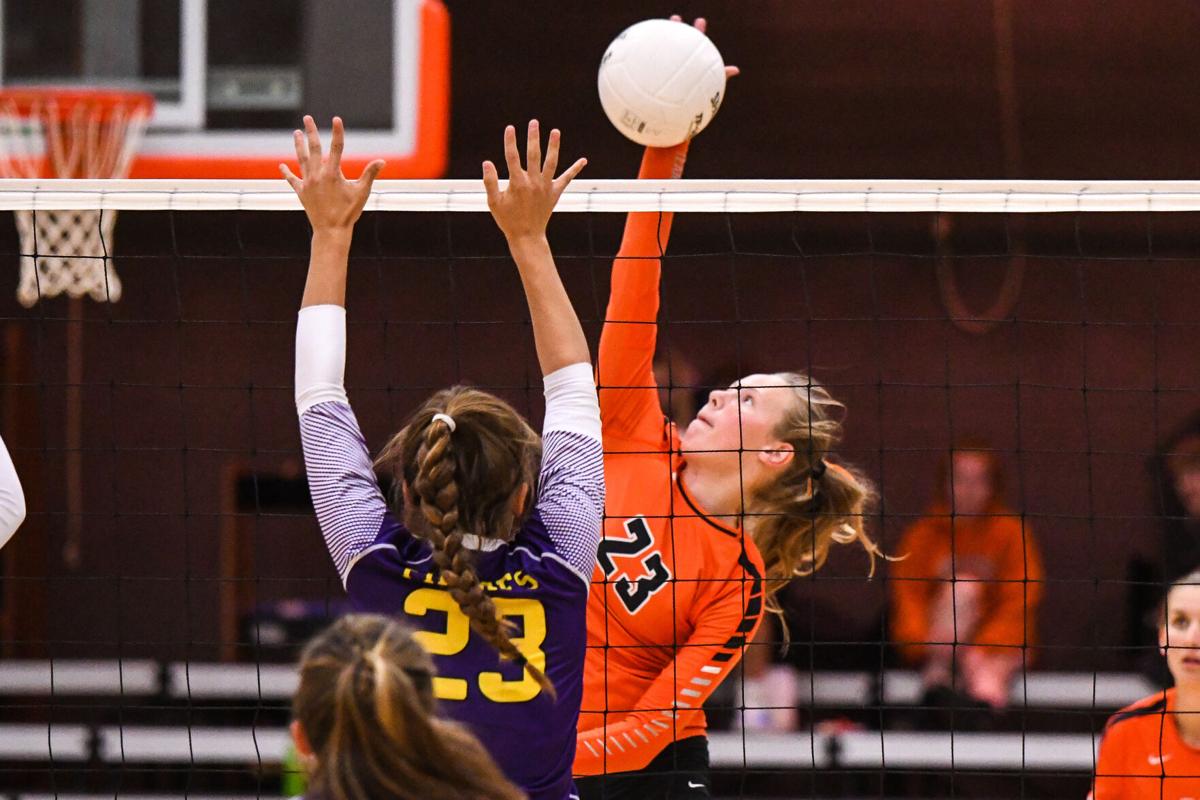 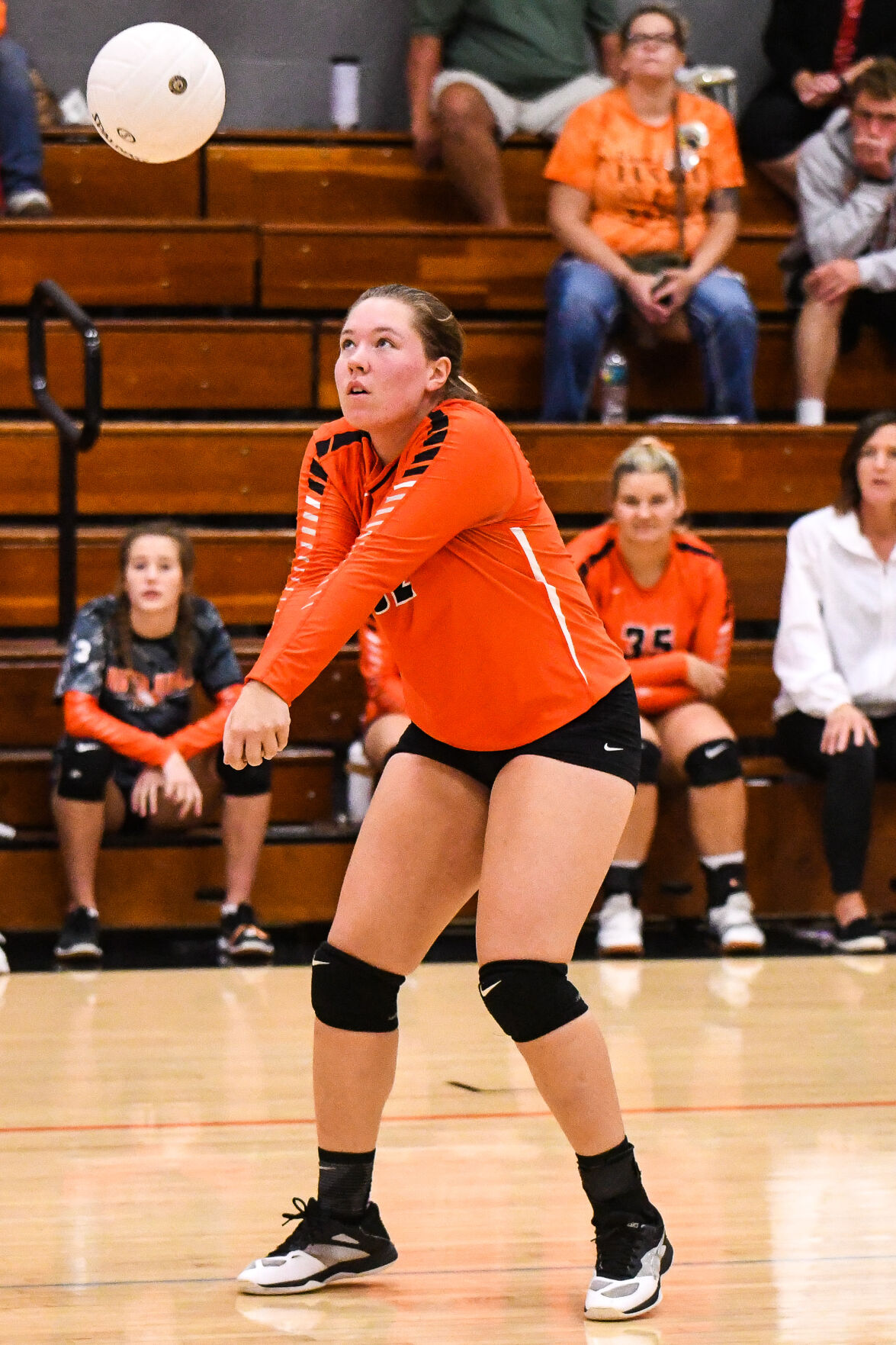 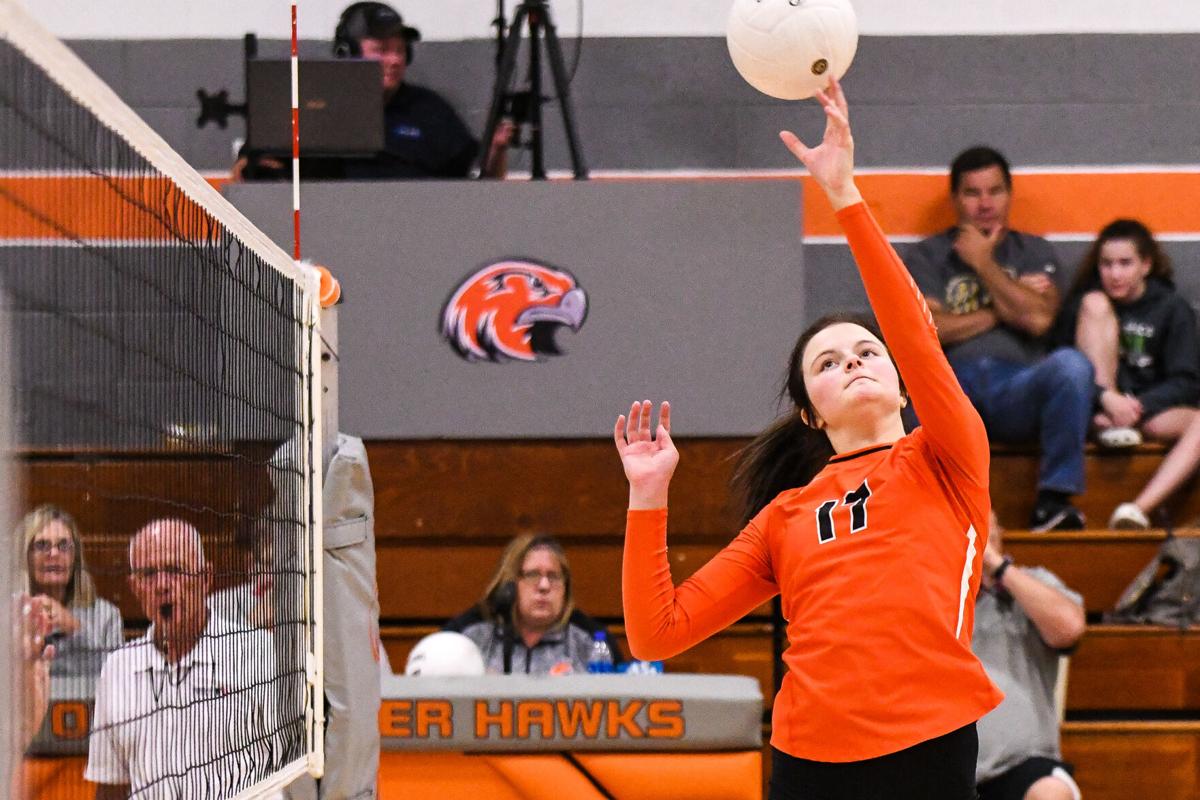 Easton Valley senior Aleah Johnson tips a ball over the net during the River Hawks’ Tri-Rivers Conference sweep over Alburnett on Tuesday night at the Miles Elementary School gymnasium.

Easton Valley senior Aleah Johnson tips a ball over the net during the River Hawks’ Tri-Rivers Conference sweep over Alburnett on Tuesday night at the Miles Elementary School gymnasium.

MILES – Even with a shaky second set, the Easton Valley volleyball team completed a 3-0 Tri-Rivers Conference sweep over Alburnett on Tuesday night at the elementary school in Miles.

“Playing the other side of the conference is always a big rush,” senior Kaitlyn Kuhl said. “They’re a little bigger than us, and we just want to get those wins. We knew they weren’t going to take it easy on us, we had to keep fighting through the end.”

It was a fun night of volleyball at the Easton Valley Elementary School gymnasium with no lack of excitement, either. With one final point, the River Hawks finished off a dominant third set, where they controlled the pace of the game the entire way.

Kills came off of multiple arms out of the Easton Valley front row. The front row finished the game strong, with a final block from Aleah Johnson ending the game.

“They were a really scrappy team and they were picking up a lot,” Kuhl said. “We were just trying to pound the corners and look for the open lines. “

That wasn’t the case all night. After taking Set 1, Alburnett rattled off six straight points to start Set 2. All of those points came off of bad serve receive.

When they were behind 5-0, head coach Denise Larson called a time out.

“I said we need to take care of the ball,” Larson said. “We need to get our body in a good position and use our eyes.”

They came out and lost one more point, but a swing from Kaitlyn Kuhl snapped that.

“I think we’re always big on serve receive,” Kuhl said. “It’s a focus in practice and it was just a mental game for us in that moment and we had to push out of it. Coach called a timeout and we got it together really quick.”

From there, they had a hole to dig out of it. Calm, cool and collected the River Hawks put up points and slowly made their way toward the Pirates.

“We knew we were more than capable of coming back from that point,” Kuhl said. “We were down six, seven – we just had to take our time and do one at a time.”

Renee Hartung swung on an overpass at the net and the Pirates weren’t able to send it back over, and the River Hawks tied the set up 19-19 for the first time.

“If there’s one thing to take from tonight, they showed a lot of character and a lot of resilance coming back in that game,” Larson said. “I hadn’t seen that out of them this season yet, so it’s good to see.”

A round of nice serves and a couple of aces from Mikayla Mitchell helped Easton Valley close it out.

The River Hawks really owned the game most of the rest of the night. Their defense played particularly scrappy with plenty of touches from the front row and big saves from the back.

“We’ve had a lot of moments of it, but some moments more like the second set where we get in a bad place,” Larson said. “I think people are starting to lead the defense a little bit and help us get out of those rutts.”

Easton Valley (8-3) continues conference play on Thursday with a road game against Midland and then stays on the road this weekend for the Springville Tournament.

CAMANCHE – The Camanche Storm got closer each set, but were unable to pick up a win Tuesday night, falling to Anamosa in three.

Abby Beal led the offensive effort with four kills and Miley Duritza added another three. Both Celina Hermann and Jamie Robertson ended with two on the night.

Danika Dodson had eight digs for the Storm, and Jamie Robertson added four.

DAVENPORT – Coming off of a tough tournament in Eldridge this weekend, the Clinton volleyball team picked up a 3-0 sweep over Davenport West in Mississippi Athletic Conference play Tuesday night.

Clinton is in back in action this Saturday, hosting their home invitational.

Elaina Schroeder finished with four kills and three blocks for the Sabers, while Lexy Cooper led the defense with 15 digs on the night.

CLINTON – The Clinton girls’ swim team picked up a team win on Tuesday night, beating Davenport North in the pool 109-41 at home.

The River Queens picked up first place finishes in all bu two of the varsity events.

Lydia Hoffman, Claire Unke, Lexy Hermann and Macie Hoffman won the 200 Yard Medley to kick off the night, swimming the event in 2:14.96. The River Queens also claimed the runner-up spot.

Both Hoffmans joined up with Natalie Cagle and Juliana Clark later in the meet to win the 200 Yard Freestyle Relay, touching the wall in 1:57.77. Hermann, Unke and Lydia Hoffman paired with Hannah Malli in the 400 YArd Freestyle as well, winning that in 4:27.95..

Natalie Cagle won an individual gold medal with her 2:39.11 in the 200 Yard Freestyle.

Lydia Hoffman clocked in first in the 50 Yard Freestle in 27.27. Claire Unke finished second and Josie Bielenberg came in third.

Ava Kaup picked up an individual win with a first place finish in the 100 Yard backstroke as well, finishing the event in 1:20.02.