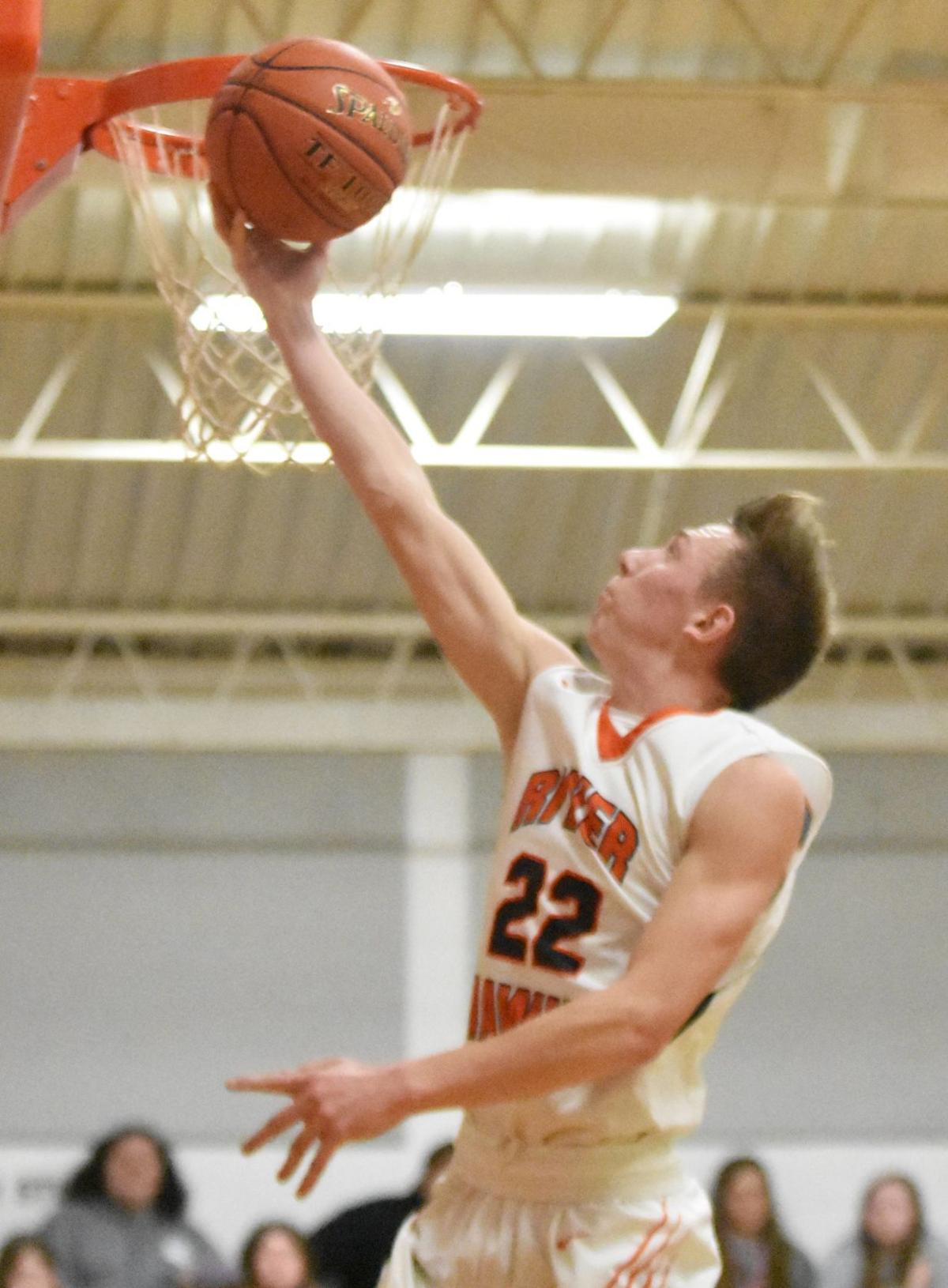 Easton Valley senior Braydin Farrell puts in a layup after a steal-fast break combo in the River Hawks’ win over Cedar Valley Christian on Friday night. 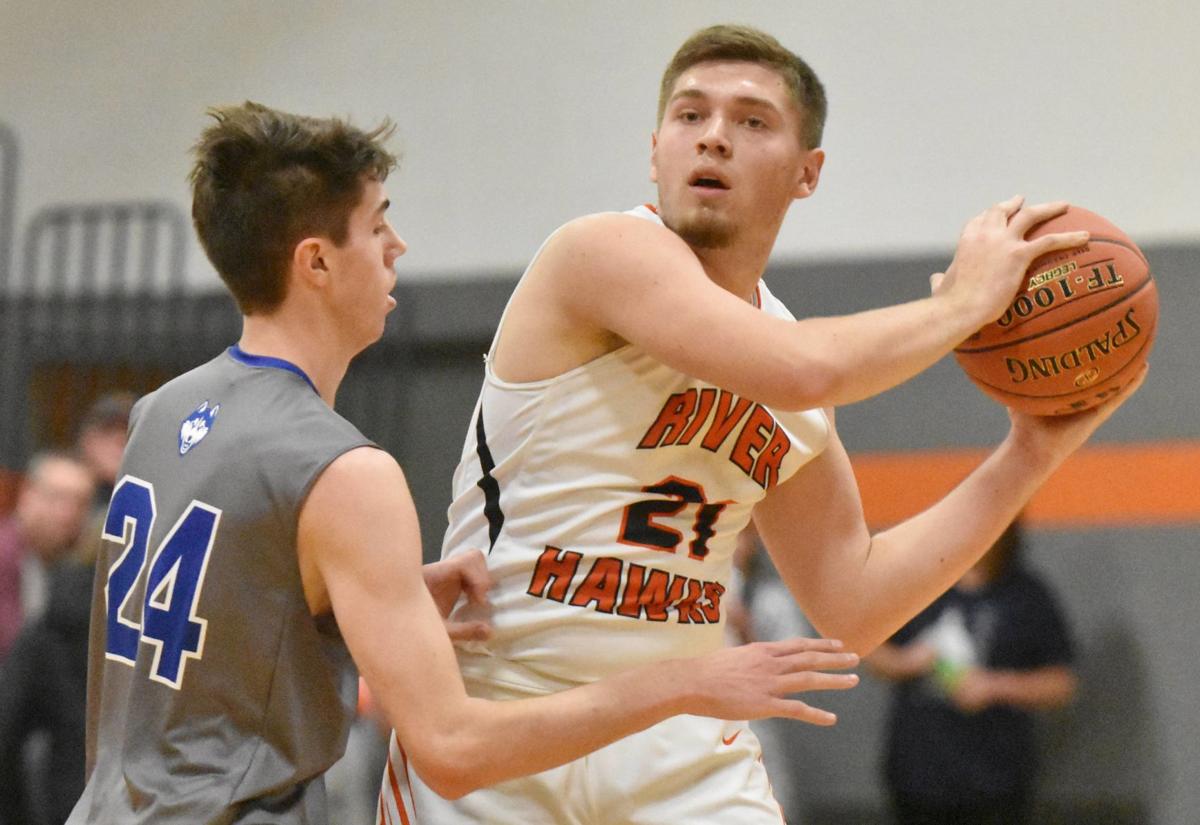 Easton Valley’s Jacob Petersen looks for a pass at the top of they key. 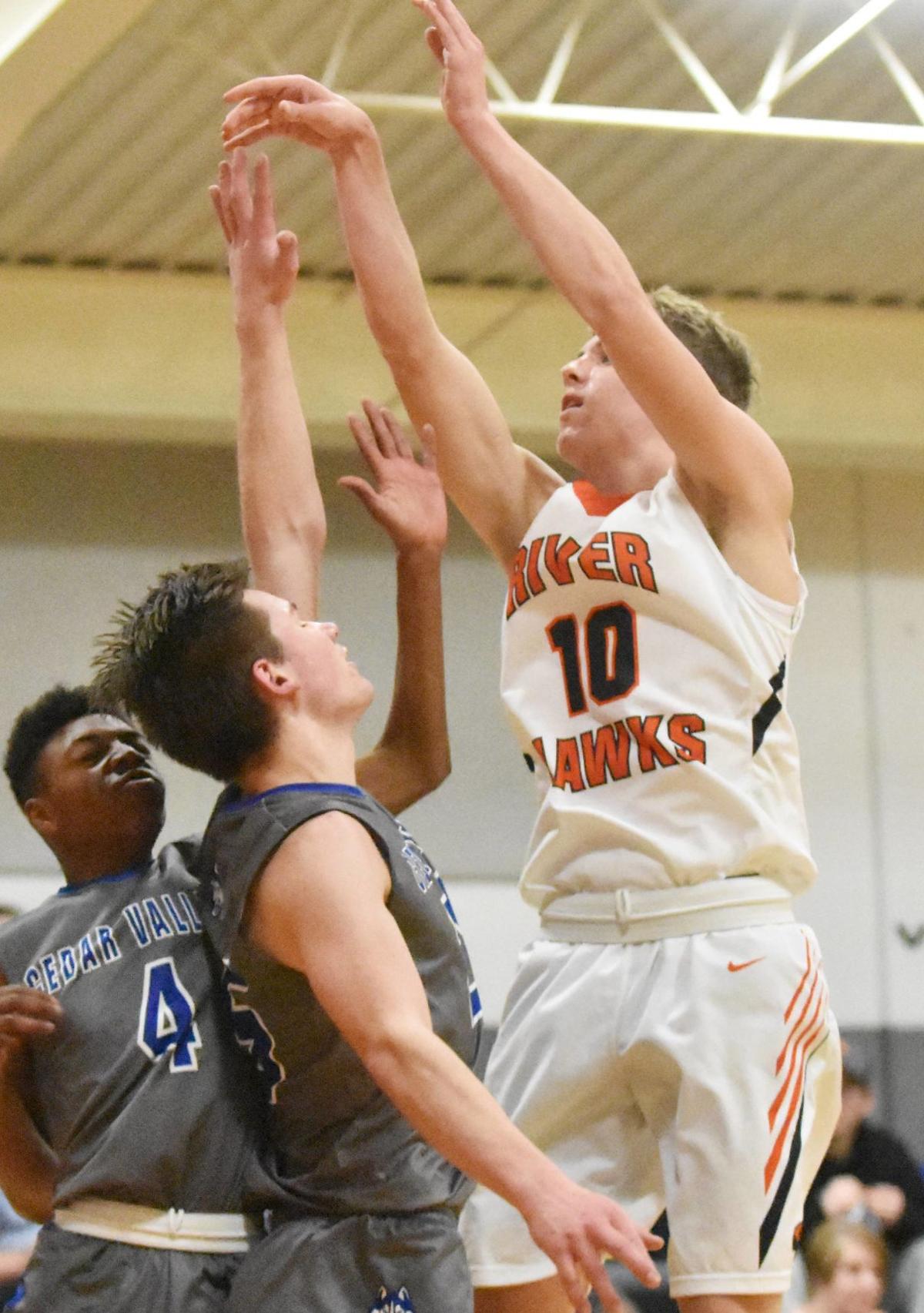 Easton Valley’s Porter Fuegen puts up a shot from the key. 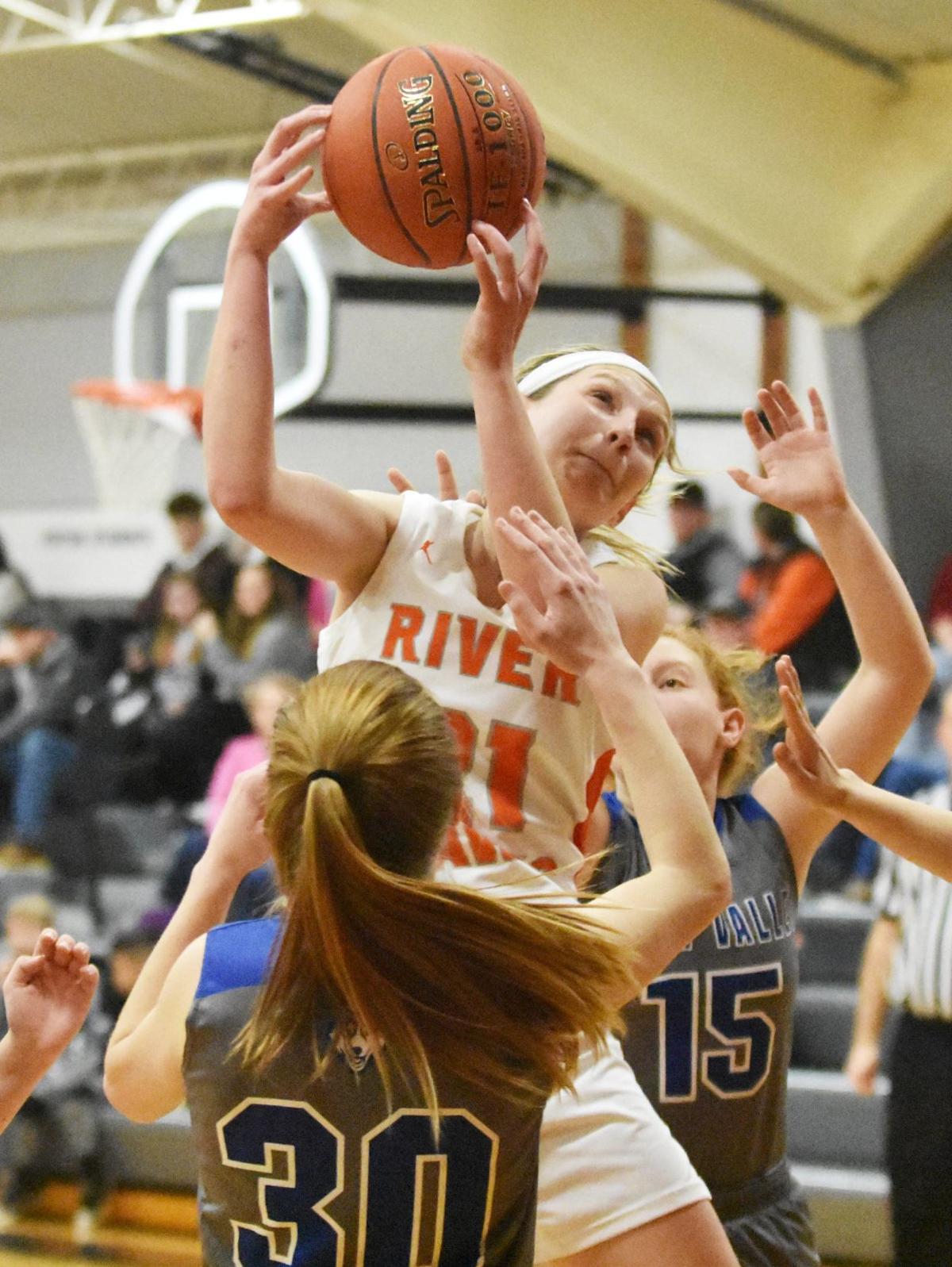 Easton Valley’s Liviah Johnson pulls down a rebound during the River Hawks’ win over Cedar Valley Christian on Friday. 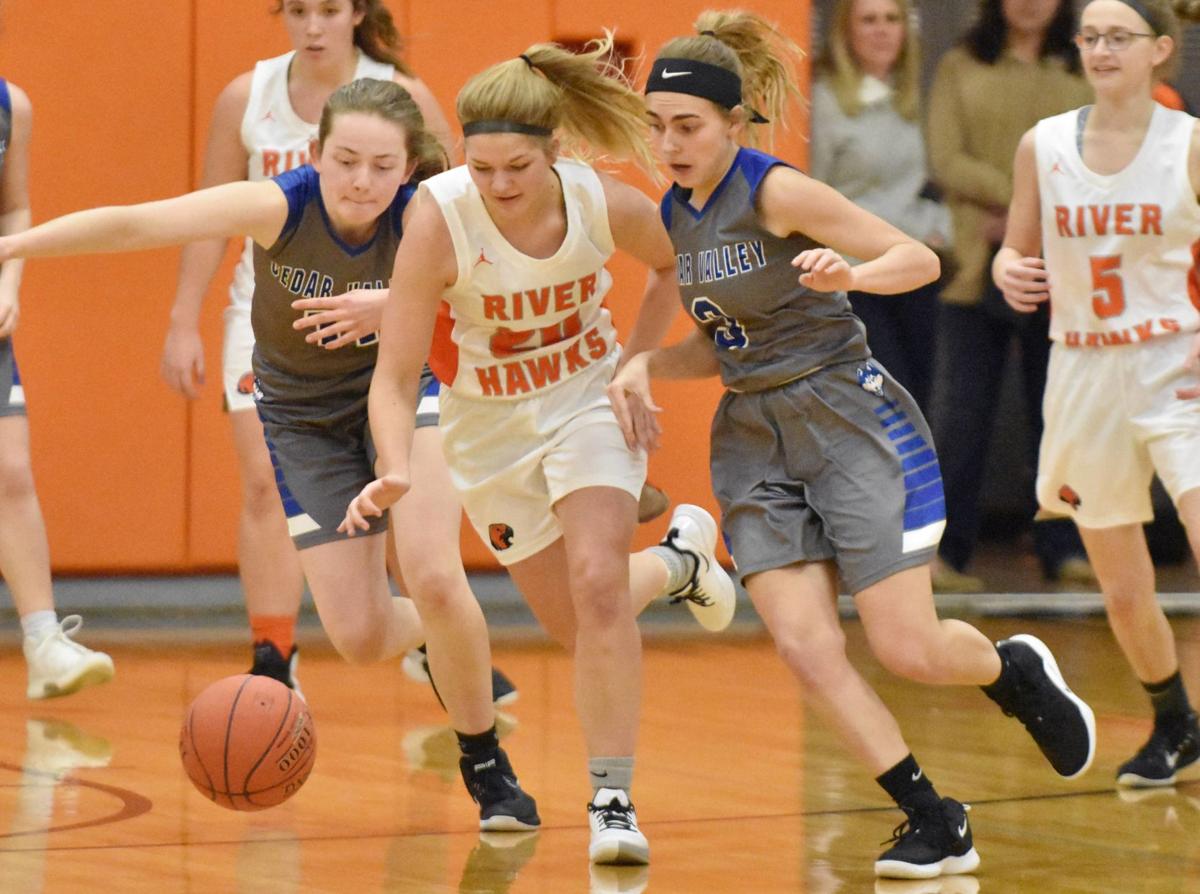 Easton Valley senior Braydin Farrell puts in a layup after a steal-fast break combo in the River Hawks’ win over Cedar Valley Christian on Friday night.

Easton Valley’s Jacob Petersen looks for a pass at the top of they key.

Easton Valley’s Porter Fuegen puts up a shot from the key.

Easton Valley’s Liviah Johnson pulls down a rebound during the River Hawks’ win over Cedar Valley Christian on Friday.

PRESTON – The No. 1 Easton Valley boys are good. Really good.

Friday night they proved that in the most impressive of ways in a win of Tri-Rivers Conference opponent Cedar Valley Christian.

The River Hawks walked away with a 94-41 win over the Huskies on Friday night. They did that without any of their starters.

The River Hawks are participating in the Eric Ottens Memorial Shootout in Fulton on Saturday, playing at 12:30 p.m. They have one of their toughest matchups of the year, taking on a 16-4 Lena-Winslow team. Because of the back-to-back games, head coach Dan Beck played with his substitutes

“We played our reserves to give them the opportunity to play in front of a good home crowd,” Beck said. “The reserves were very impressive and it showed we can go deep into our bench if needed.”

It was a little slow to start. The offense was a bit stale in the first moments of the game, but the defense was doing it’s job. Three consecutive baskets by forward Logan House really kicked off the scoring and extended the lead.

Keaton Wilson drained a three with just 12 seconds left in the first quarter, and then the orange defense forced a turnover. With the final seconds ticking, the River hawks found Hayden Bormann for an easy jumper and they took a 20-11 lead.

That’s where they really took off offensively. A quarter full of fast break, Logan House – post ups, and high flying three-pointers ensued, and Easton Valley went on a 41-5 run in the next eight minutes to lead the huskies 61-16 by halftime.

Eleven different River Hawks got playing time on Friday, eight of them putting up points. Logan House led that effort with 26, 20 of them coming in the first half. Keaton Wilson and Porter Fuegen each put u 16 a piece and senior Brayden Farrell ended with 10.

The River Hawks stay perfect on the season, improving to 13-0. They take on Lena-Winslow on Saturday and then return to conference action on Tuesday when they travel to Calamus-Wheatland.

PRESTON – It was a good night all around in Preston. In addition to a fundraising cake auction, the River Hawks completed the varsity sweep of Cedar Valley Christian.

The River Hawks downed the Huskies 56-23, their second win over CVC this year.

It was a slow start. The River Hawks only led by an 11-8 margin after the first eight minutes. When the score of the pair’s first matchup was 56-17, head coach Chad Gruver knew the River Hawks should have more commanding control of the game.

“We came out a little flat there in the first quarter,” Gruver said. “We subbed out three and it kind of gave us a lift. Sometimes you have to do that to wake them up a little bit.”

They took it. The girls responded with a light pressure in the back court that started forcing more and more Huskie turnovers. That led to transition points for the River Hawks, and they went on an 11-0 run.

“We stress defense and run the entire year,” Gruver said. “We have a lot of girls who ran state track – they’re fast, they can handle the ball. It’s always our goal to get as many transition points as we can.”

After RaeAnn Carlson pulled down an offensive rebound for a bucket, the River Hawks took a 20-point lead and never looked back.

To kick off the second half, Easton Valley had two consecutive defensive stops. Each time, the ball ended up in Sydney Stoll’s hands and she took it down the floor, eventually moving it across the lane where Sarah Driscoll finished each one.

Gruver was able to get some of his substitutes playing time in the second half as well.

“We said it’s their time to shine,” Gruver said. “We don’t want to see them go out there and just pass the ball around ... we want to see what they have.We’re always looking forward to next year too, it’s about building a program. We told them to keep up the intensity and play defense.”

The River Hawks improve to 7-7 and continue conference play on Tuesday at Calamus-Wheatland.

MUSCATINE – The Clinton River Kings couldn’t duplicate their first win, falling 62-50 to Muscatine on Friday night on the road.

The first meeting with the Muskies marks the Kings’ only win so far this year.

Both Treveon Bailey (15) and Max Holy (13) scored in double digits while Damarcus Knox nailed three 3-point shots, but it wasn’t enough. Muscatine’s Noah Yahn put up 20 points while two other Muskies scores in double digits to help take down the River Kings and even the series between the two for this season.

Clinton falls to 1-10 and will play at Maquoketa on Saturday afternoon, making up a game that was cancelled last week.

PORT BYRON, Ill. – The Fulton boys improved to 4-0 in the Three Rivers Athletic Conference on Friday night with a 55=41 win over Riverdale to end their week.

The Steamers jumped out early and never relinquished the lead. Connor Barnett impressed with 24 points, going 16-for-16 from the free throw line. Kyler Pessman added 13.

The Fulton Steamers (15-5) host the annual Eric Ottens Memorial Shootout on Saturday, playing in the final game of the day slated for 8 p.m. against Stillman Valley.