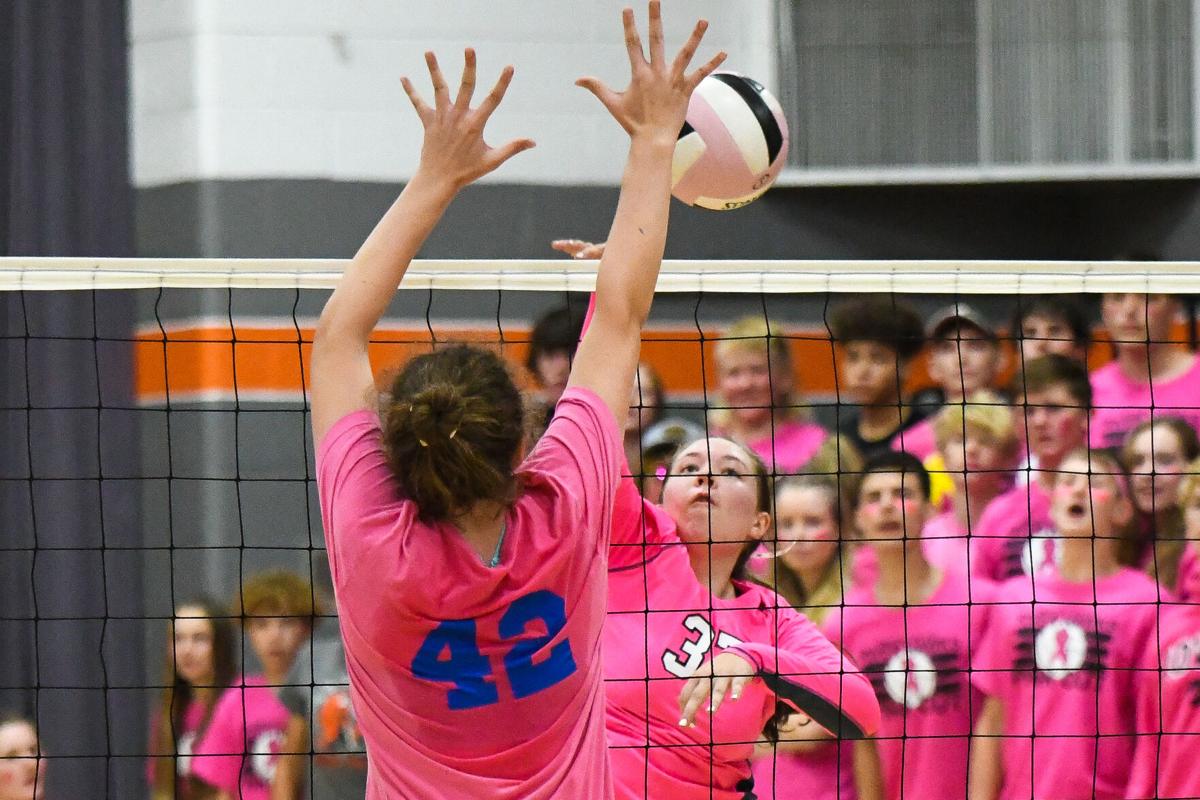 Easton Valley senior Dana Carlson hits a ball around Prince of Peace’s Sarah Moeller during the River Hawks’ Tri-Rivers Conference victory over the Irish on Thursday night in Miles. 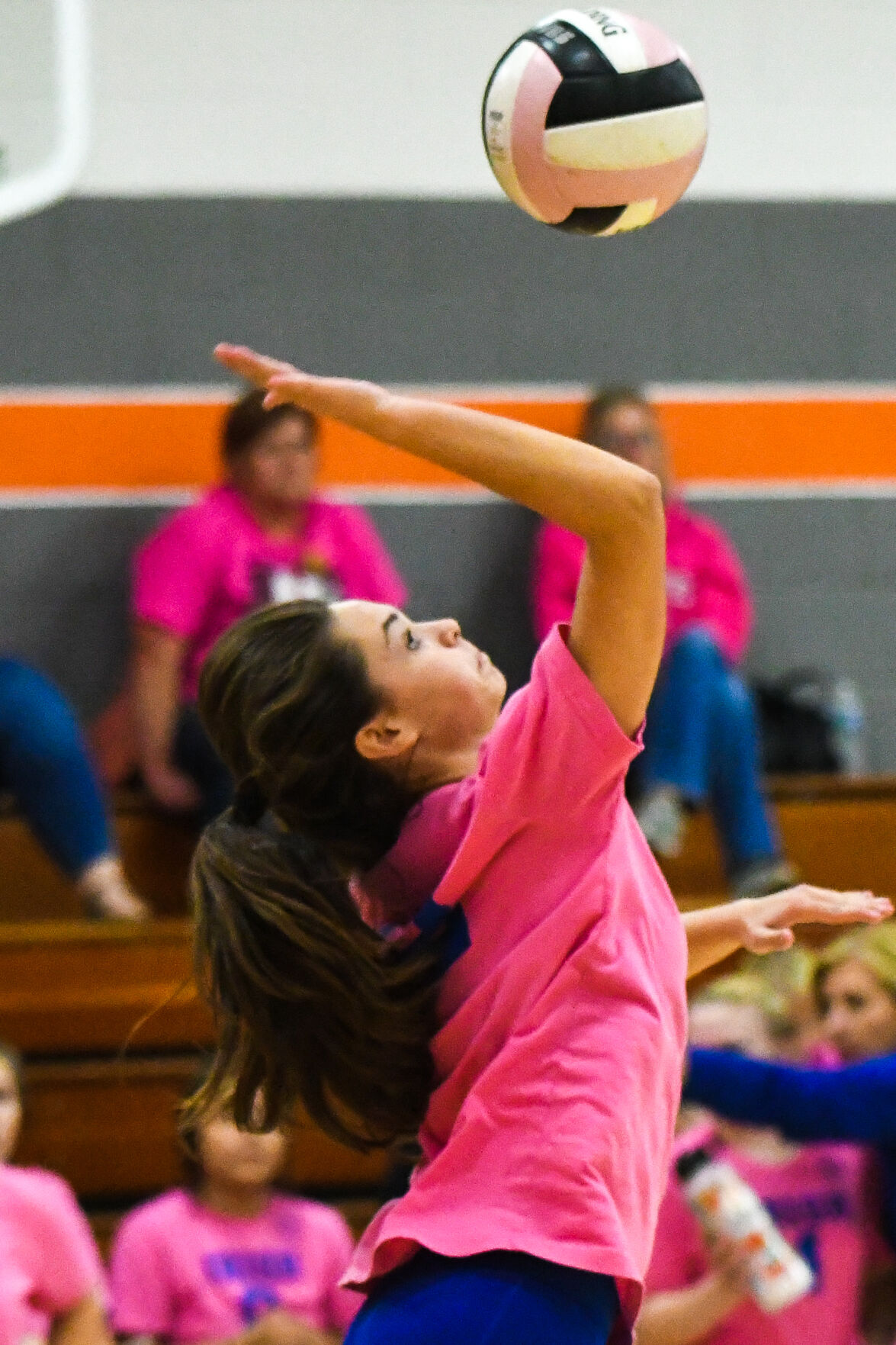 Prince of Peace’s Lilly Smith serves a ball during the Irish’s loss to Easton Valley in Miles on Thursday night.

Easton Valley senior Dana Carlson hits a ball around Prince of Peace’s Sarah Moeller during the River Hawks’ Tri-Rivers Conference victory over the Irish on Thursday night in Miles.

Prince of Peace’s Lilly Smith serves a ball during the Irish’s loss to Easton Valley in Miles on Thursday night.

MILES – Two of the top teams in the Tri-Rivers Conference East came together in Miles Thursday night, and it was the Easton Valley volleyball team who came out on top to stay undefeated in conference play.

The Irish had only lost to No. 4 ranked Lisbon on the East side of the conference so far this year, while the River Hawks haven’t lost yet. They face Lisbon next Tuesday.

However, the Irish were down a starter Thursday night. The Irish were playing without starting setter and leading server Shannon Kenneavy, who was out with injury. Kenneavy has nearly all the assists and is a team leader in aces and digs for the Irish normally.

“We talked from the beginning of the season that we all have to be resilient,” Prince of Peace head coach Stacie Kenneavy said. “We all have to know more than one position because we learned last year you never really know where you could end up playing. This made it a little more real.”

The first two sets were completely in favor of the River Hawks.

“We were attacking,” Easton Valley head coach Denis Larson said. “We were just working well together as a team. We were creating offense and finding holes.”

The steady attack from the River Hawks looked strong against a shaky Irish defense. The Prince of Peace back row struggled to get the ball up.

“Our serve receive was not good,” Kenneavy said. “Too many free balls. We were not playing things we thought were close.”

Kiely Debo stood in for Kenneavy as setter. Debo finished with 21 assists on the game.

“For not having set varsity since the very beginning of the season, she did a great job,” Kenneavy said. “We did not make it easier on her with our passing.”

Down by two sets, the Irish came out and made the third set interesting.

Prince of Peace got some huge blocks going and some big kills set up and garnered a five point lead in the third set. The block gave the Easton Valley front row fits through the first half of the set.

“We just kept talking about getting quick to the ball,” Larson said. “Because a lot of times we can be above the block. There was a side of the court wide open, there were spots that were open, we just were chasing the ball instead of beating the ball.”

It wasn’t over there. Dana Carlson sent a tip over the block to take another River Hawk lead, but then Prince of Peace answered with a big block from middle Sarah Moeller.

“We were figuring it out,” Kenneavy said about the Irish block. Prince of Peace finished with four blocks and numerous touches. “We talked about where they were going to hit and moving the block and they started adjusting to that.”

A couple of Irish errors were where the set ended, Easton Valley keeping composure through the final points.

“We knew [their setter] was out but I watched them play in the district final last year,” Easton Valley’s Larson said after her team finished the win. “They were missing three key players and they still played amazing. They’re scrappy.”

Lilly Isenhour led the kills for the Irish with 11, adding 15 digs. Braxton Morhardt had 19 digs for the Irisha nd Nyah Thomas had two blocks.

The Irish (7-14) move on to play in the Northeast tournament this Saturday before returning to conference play on Tuesday with a home game against Cedar Valley Christian.