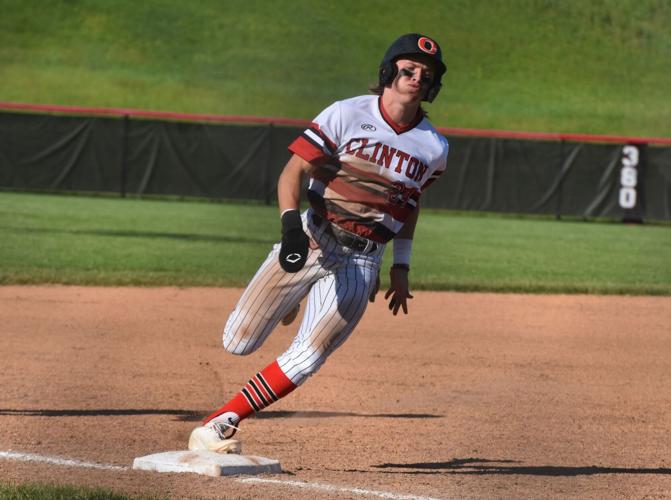 Clintons Addison Binnie puts on the jets as he rounds third base to come home and extend the lead over Central DeWitt on Thursday night. 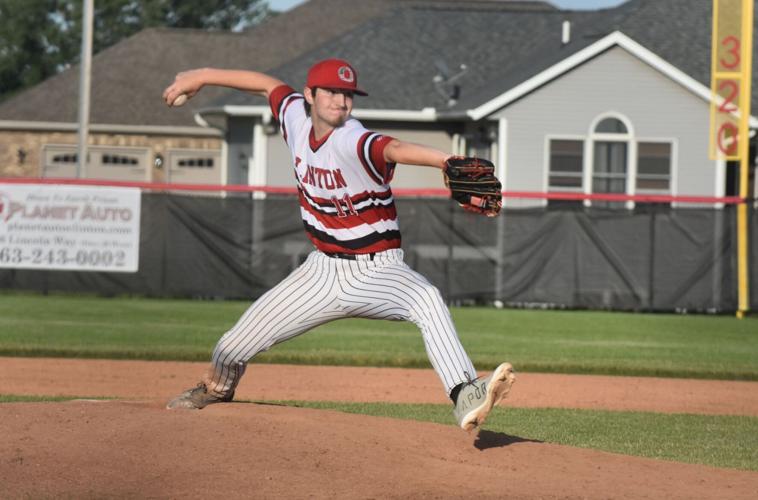 Clintons Addison Binnie puts on the jets as he rounds third base to come home and extend the lead over Central DeWitt on Thursday night.

CLINTON – It was a wild Thursday night at the Durgin Complex as Clinton hosted Central DeWitt in a double header. In game one it was all River Kings as they won 7-1. However, all the drama was saved for game two when the River Kings walked it off in eight innings 5-4.

In game one the Sabers got one hit, but the River Kings Zeiv Presson was able to avoid any damage on the mound and escape the inning.

The River Kings were up to bat in the bottom half of the inning and they started things off right with Ian Thomas leading off with a single. He then stole second base to put a runner in scoring position with nobody out. A one out walk put two runners on base. Thomas came across to score when a ball got passed the catcher for the first run of the game. Two more walks made it bases loaded with one out.

The Sabers elected to go with a new pitcher but the very first pitch went in the dirt and passed the catcher for another run. Seth Dotterweich singled to make it a three run game. An error by the Sabers first baseman scored another run and made it 4-0 heading to the second inning.

In the bottom of the second another error put Addison Binnie on second base with one out. Jai Jensen tripled to score Binnie and put the River Kings in prime position. His teammate Ben Wittenauer would single him in for an early 6-0 lead.

Neither team could muster much up in the third inning. The Sabers finally got something going in the fourth inning with a leadoff triple by Kyle Bixby. He came around to score on a fielder’s choice by the River Kings third baseman. Despite a one out single the Sabers could not get any more runs and were down 6-1.

Binnie got on base once again in the bottom of the fourth for the River Kings. Again, it was Jensen driving him in via a triple to make it 7-1.

Neither offense would score again, and the River Kings took game one 7-1 behind a one run complete game by Presson.

In game two the Sabers bats had more pop as a pair of singles put them in prime position to score in the first inning. A smooth double play by the River Kings got them out of the inning and kept the game scoreless.

The Sabers offense kept it going in the second inning with a RBI single by Caden Ridgley put them up one. Two batters later Noah Thein tripled to bring in two more runs and expand the lead to 3-0.

The River Kings took advantage of a pair of walks in the fourth inning. They paired that with a single to load the bases. Tavian Bailey doubled to bring in two runs and make it a one run game. A sacrifice fly brought in the tying run to make it 3-3.

Jacob Maher singled in the top of the fifth to grab the lead back for the Sabers and make it a 4-3 game.

Both teams had fight in them as the River Kings fought back in the bottom of the sixth inning with a leadoff single by Kinnick Belitz. An error by the Sabers put two on with only one out before Bailey picked up an RBI single to tie the game with his third RBI of the night.

Neither team could break through and score in the seventh inning and this one found it’s way to extra innings.

An error by the Sabers put a runner on with one out for the River Kings. He made his way over to second base on a wild pitch that got Bailey to strike out. Issac Huizenga was the hero in this one, singling to right field and bringing in the winning run.

The River Kings are back in action Friday night at 7 p.m. when they take on Northeast on the road.