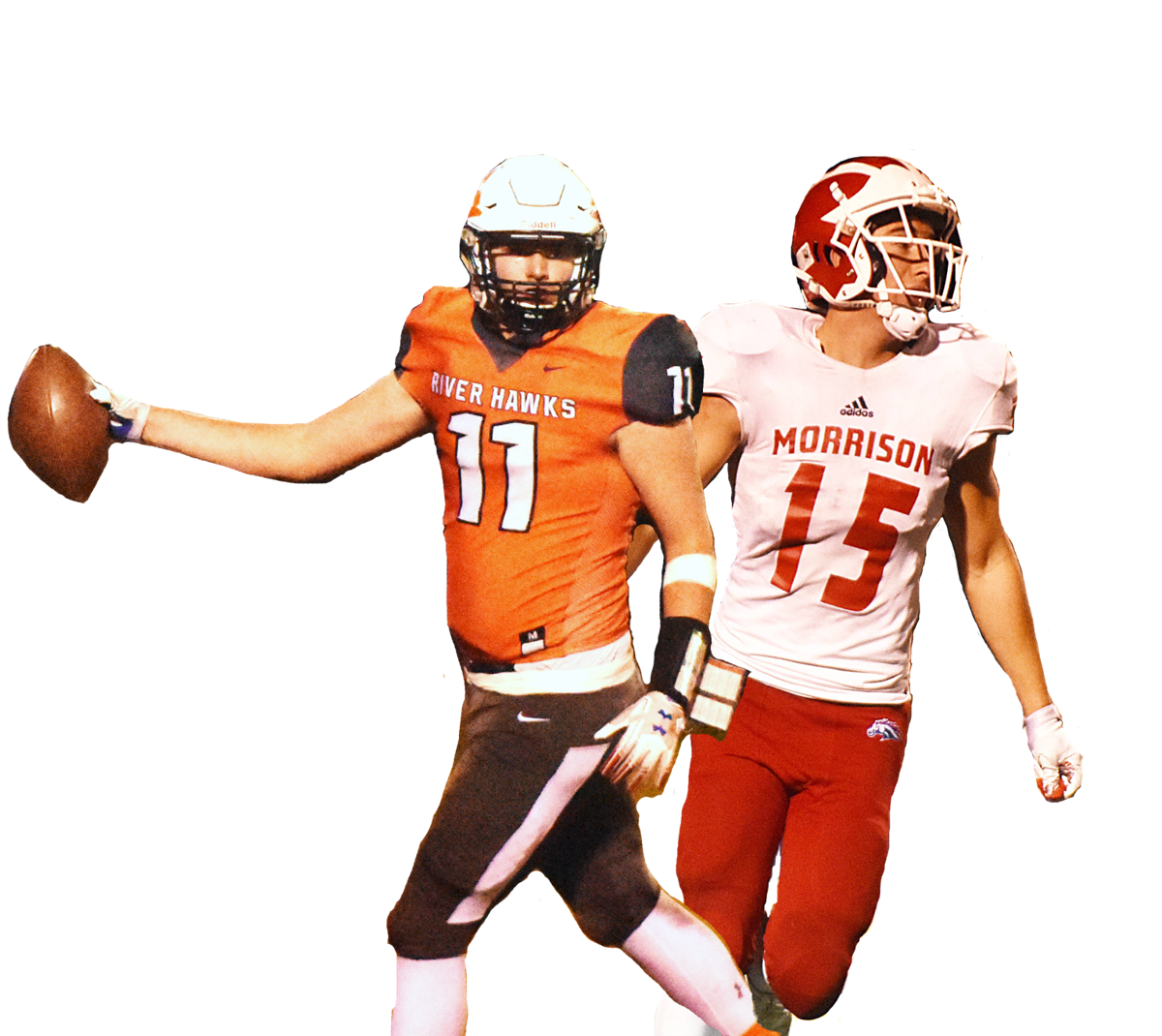 Carie Kuehn/Clinton Herald Easton Valley’s Logan House (15) and Morrison Nathan Mickley (15) are pictured during regular season games. Both the River Hawks and the Mustangs continue their postseasons this weekend, advancing to Round 2 of their respective playoff brackets with huge opening wins. 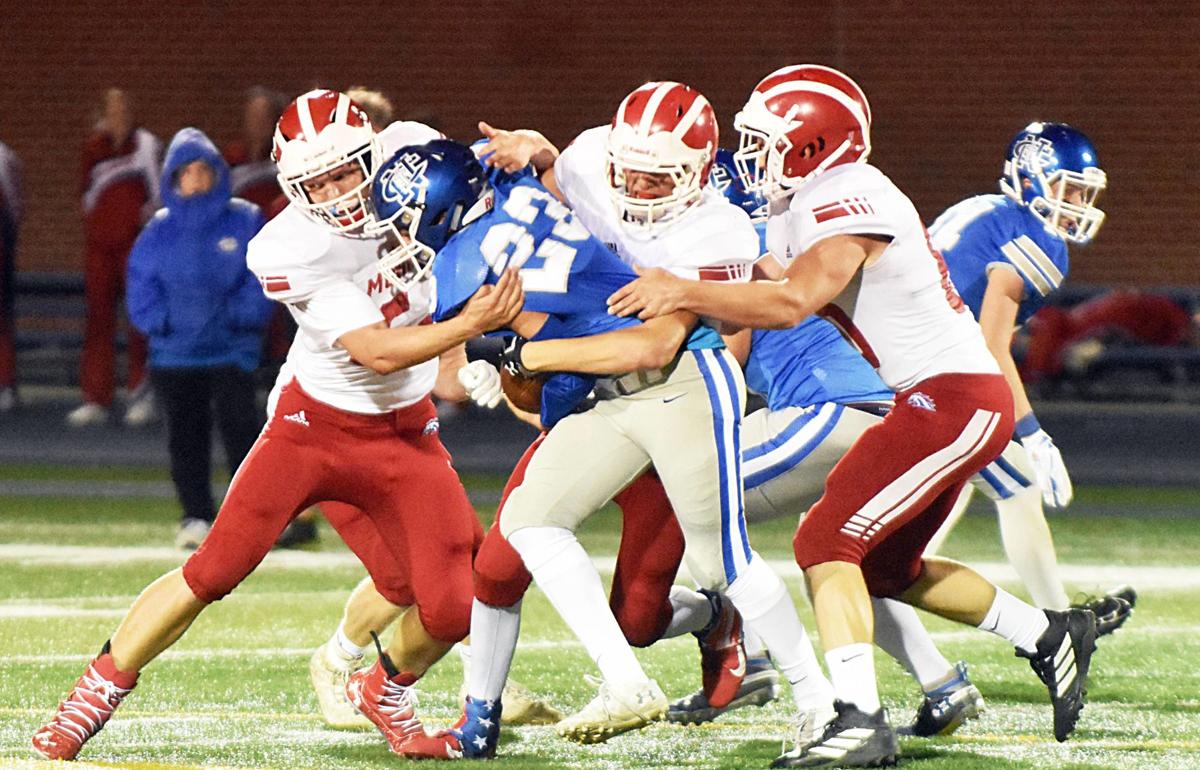 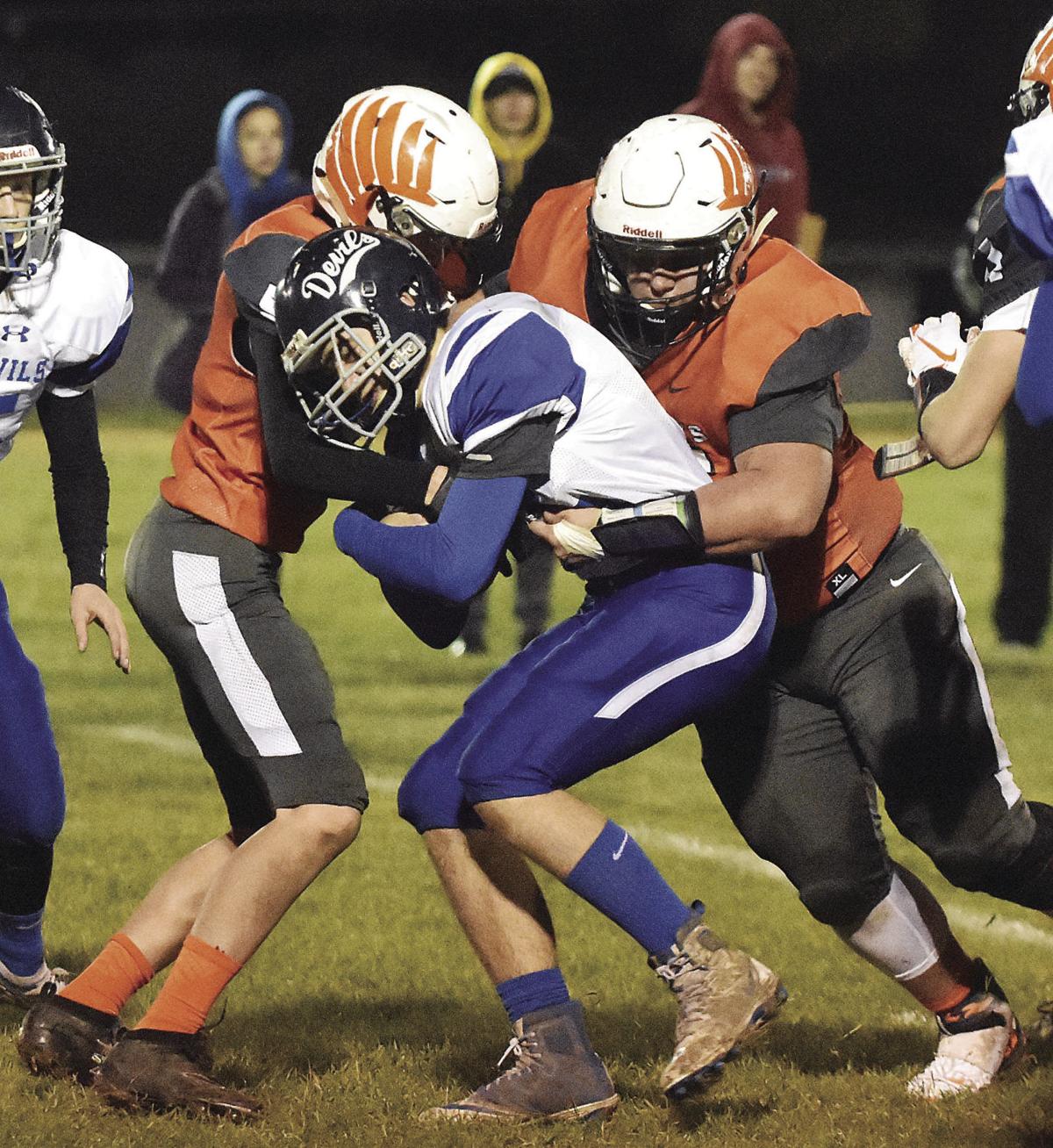 Andin Farrell and Reid Heinrichsen team up for a tackle against West Central.

Carie Kuehn/Clinton Herald Easton Valley’s Logan House (15) and Morrison Nathan Mickley (15) are pictured during regular season games. Both the River Hawks and the Mustangs continue their postseasons this weekend, advancing to Round 2 of their respective playoff brackets with huge opening wins.

Andin Farrell and Reid Heinrichsen team up for a tackle against West Central.

Two area football teams are still kicking in their respective playoff brackets, and both have already proved just why they deserve to be there.

Both Morrison and Easton Valley are coming off huge wins in the first round and heading to the next round in the state brackets on each side of the river.

The competition only gets harder from here on out for both squads, and Round 2 will be no different.

The River Hawks’ defense was nothing short of dominant to kick off the playoffs, leading them to the quarterfinals.

They have a tough test in No. 3 Don Bosco, but then again the River Hawks have been underrated all year long. The two have similar opponents in Dunkerton and first rounder Gladbrook-Reinbeck, and both Easton Valley and Don Bosco had similar outcomes between the games.

The Dons have a solid quarterback, but have an impressive run game fueling their offense. Thomas Even has over 1400 rushing yards so far this season, plus Cael Frost has added another 900. It gives them the third best rushing offense in the entire 8-man field and the third most prolific offense between all 8-man teams in the state.

But the River Hawks are boasting the most prolific 8-man team this season, thanks to a rushing effort and one of the best quarterbacks in the state in senior Nate Trenkamp. Trenkamp has thrown over 2,500 yards so far this season, just surpassing 100 career touchdown passes in Round 1.

Both teams also force a lot of sacks and turnovers with speedy defenses.

The Dons have only allowed 72 points so far this season – only three games where they’ve allowed over 10 points. That will leave the River Hawks with a challenge offensively, plus the run game they need to stop.

No. 5 Hiawatha-Kirkland at No. 4 Morrison

The Illinois schools don’t hit the quarterfinals until the third round, but Morrison is looking poised to do just that.

They welcome No. 5 Hiawatha-Kirkland to Morrison on Saturday afternoon, a team that’s No. 10 in the state rankings with one loss on the year.

The Morrison defense has proved lethal against every single team so far this year. For the ninth time this season, the Mustangs allowed less than 10 points by their opponent with a 58-6 victory over Cambridge in front of their home crowd.

Hiawatha brings a dual threat to Morrison on Saturday. Their quarterback has thrown for 1300 yards this year, with a favorite target in senior Ty Kilcullen.

On the other hand, senior Kyle Thompson has averaged over 100 yards per game on the ground, giving the Hawks a major threat in the backfield.

The Mustangs are undefeated, however, and bring their own offensive threats with pieces like Nathan Mickley, Hunter Newman and Keegan Anderson. Pair that with their unbelievable defense and they’ve proved to be on of the best in the state, rolling every opponent so far with ease (including two Class 2A playoff teams in Sterling Newman and Orion).

Underrated might be the word you used to describe Morrison throughout the season even though they stayed undefeated with a quiet power. The No. 4 team in the state has just three more games to be playing for a title.

The winner on Saturday will most likely take on the No. 1 seed of the bracket, Kewanee-Wethersfield.

The Morrison football team ended their season over the weekend in a hard-fought 20-13 loss on the road, knocking them out of the Class 1A Illi…